The Erenel site is undergoing major changes and lore updates. Please note only articles listed in the Gamingbrew Discord are finalized. All other articles should be considered outdated lore.
One of the most ancient and feared of all curses, lycanthropy can transform the most civilized into a ravening beast. A creature cursed by lycanthropy appears as its usual self in its natural humanoid form. Over time, however, many lycanthropes acquire features suggestive of their animal form.   Those afflicted with lycanthropy often describe it as feeling like you share a portion of your soul with another entity that can influence your thoughts and feelings. Some speculate that it’s some ancient forgotten beast that takes up residence within. Others suggest that some form of disease or parasite has grown resistant to most magical or mundane cures. Whatever the case may be, the affliction is passed on in two ways. Either receiving a bite from a lycanthrope in hybrid form or genetically through the offspring of afflicted individuals.

If a lycanthrope has children with someone who is not afflicted, there is a chance that the offspring will inherit lycanthropy. If both parents are afflicted, it becomes a much greater chance.   It is believed that drinking Moon Tea before attempting conception can repress the affliction and increase the odds that the offspring will not inherit it. Inherited lycanthropy emerges around puberty and is generally referred to as legacies or pure blood, while those passed from a bite are called moon born.

When bitten by a lycanthrope, the victim must succeed on a Constitution saving throw dependent upon the host. On a failed save, the Dungeon Master rolls 1d6. On a 1-3, the character contracts lycanthropy. On a 4-6, the character is instead infected with Sewer Pox. A Medicine check can determine if a bite has resulted in the disease or lycanthropy. Other lycanthropes can smell the infection in a fresh bite wound.   Those infected by a bite will experience their first transformation on the next full moon. The horror stories of bloodlust transformations usually involve a moon born rather than a legacy.

Whether inherited or infected, a pivotal choice occurs during the first transformation. When the change begins, the new lycanthrope must choose whether to give in to the beast, surrender themselves to its will or fight to maintain control and work towards mastery. Those who choose to give in become wild, uncontrollable beasts. The condition takes them entirely, turning them into uncontrollable ferals filled with rage and bloodlust. Ferals remain in their form indefinitely as wild beasts.   Those who fight to maintain control must battle the voice in their head. They will experience a cocktail of emotion during their first transformation, a rush of eagerness, fear, anger, exhilaration and rage. The beast within is stirring and will soon emerge.

A battle of the mind begins. The following "Tame the Beast" section can be used by Dungeon Masters and players as roleplay opportunities or skipped entirely.

Attacks against the mind require a Wisdom saving throw with the DC set by the Dungeon Master. Drinking Moon Tea within 1-hour before transformation provides advantage on the roll(s). Choose one or more of the following that best fits the transforming character.

If the character overcomes their "Taming the Beast", they can control their curse and are free to take the Erenel Lycanthrope Prestige Class or another form the Dungeon Master chooses.

When bitten by a lycanthrope, the victim must succeed on a Constitution saving throw. On a failed save, the DM rolls 1d6. On a 1-3, the character contracts lycanthropy. On a 4-6, the character is infected with Sewer Pox.   Sewer pox is a generic term for a broad category of illnesses that incubate in sewers, refuse heaps, and stagnant swamps and are sometimes transmitted by creatures that dwell in those areas, such as rats and otyughs.   It takes 1d4 days for sewer pox symptoms to manifest in an infected creature with symptoms including fatigue, fever and cramps. The infected suffers one level of exhaustion. They regain only half the normal number of hit points from spending Hit Dice and no hit points from finishing a long rest.   At the end of each long rest, an infected creature must make a DC 12 Constitution saving throw. On a failed save, the character gains one level of exhaustion. On a successful save, the character's exhaustion level decreases by one level. If a successful saving throw reduces the infected creature's level of exhaustion below 1, the creature recovers from the disease. 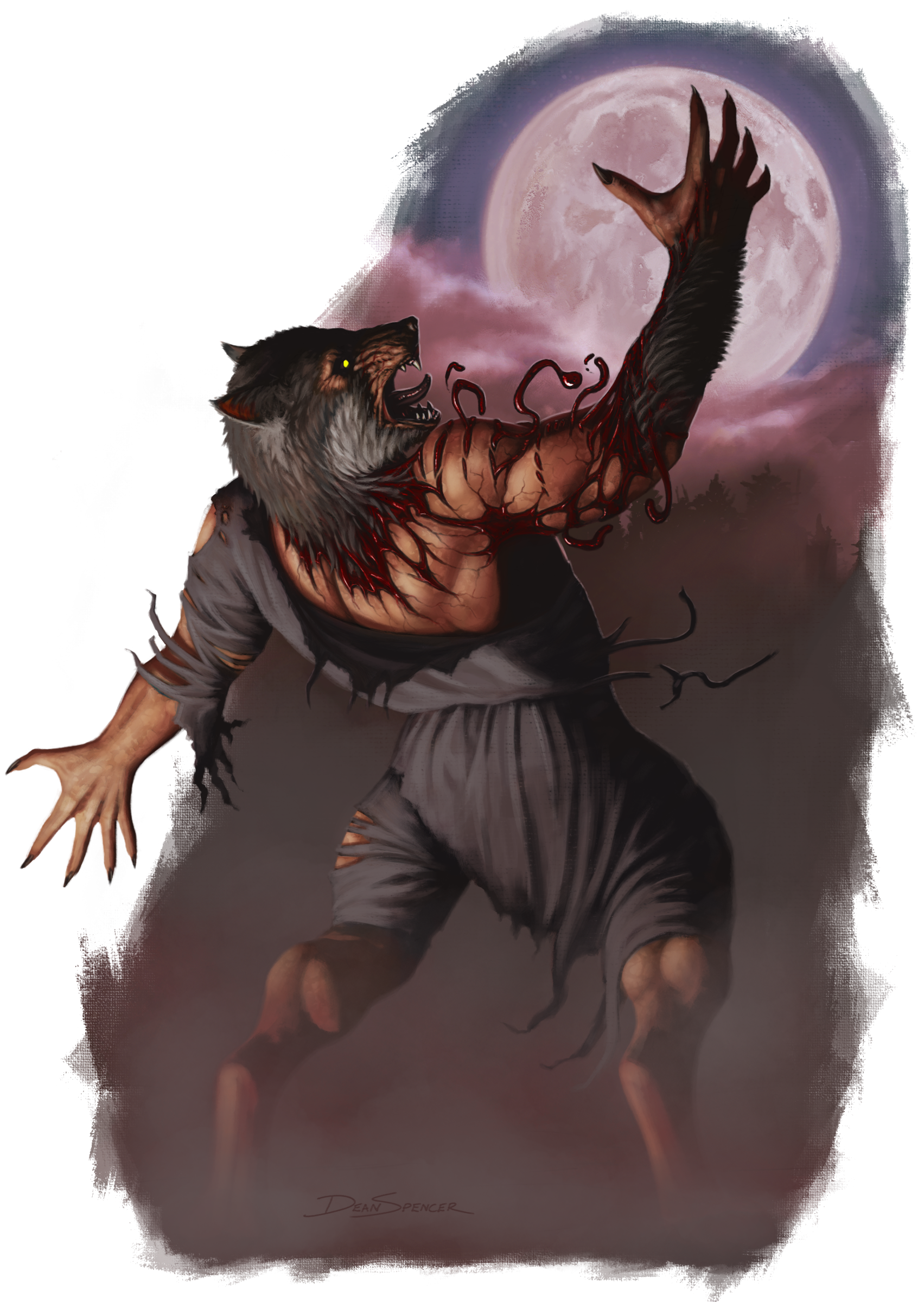 by Dean Spencer
Conditions
Join Erenel Discord!
A special thank you to all of Gamingbrew patrons, friends and family who make this possible.
A big thank you to Wizards of the Coast for the Open Gaming License and allowing a writer the chance to chase his passion. The Erenel Fictional Universe is presented under the OGL rules for 5th edition. All content and images, unless otherwise credited, copyright ©2022 by Gamingbrew Media, LLC.
All Rights Reserved.
Open Game Content: Except for material designated as Product Identity, the game mechanics of this Gamingbrew product are Open Game Content, as defined in the Open Gaming License version 1.0a Section 1(d). No portion of this work other than the material designated as Open Game Content may be reproduced in any form without written permission.