Hidden within the ethereal plane, the Echo, an unnatural humanoid race with the face of a round reflective mirror, scours the landscape. Here, the Echo slowly expand their city of mirrors, hiding by reflecting the mortal plane back to itself and providing lost souls with an opportunity to avoid judgment in the afterlife.

When a mortal soul passes on, their body and soul separate, and the soul begins its journey to the afterlife. Upon entering the ethereal plane, the soul faces the primal deity Bedoma’s judgment, who, as the Last Guide, helps the soul find the proper afterlife plane.   A soul who refuses to stand before Bedoma and face her judgment begins to change, becoming a reflection of its previous self. These souls eventually become an Echo, as the soul slowly regrows a new form, starting as an unmoving mirror, before coalescing into a humanoid body. This gradual process takes almost a century to complete and leaves the Echo with personality traits the exact opposite of whom they were in life.   Echos suffer from discontinuity, and their previous memories are often vague or absent. Occasionally, an Echo may experience a vision of their past or a minor revelation, yet these moments are few and far between. Because of their reflective personality, the Echo remembers the event, but it often feels like they’re recalling a story or watching a play.

In its earliest incarnation, the Veil was nothing more than a small camp hidden in the Ethereal Plane, far from Bedoma’s coiled body. As time passed and more Echo manifested from their refusal to face judgment, the city grew, and the Echo had found themselves a thriving community.   Today, the Veil prospers, becoming a city filled with thousands of residents – both Echo and mortal. This great ghost city stretches into mortal and ethereal planes, allowing the living and dead a chance to coexist in uneasy harmony. 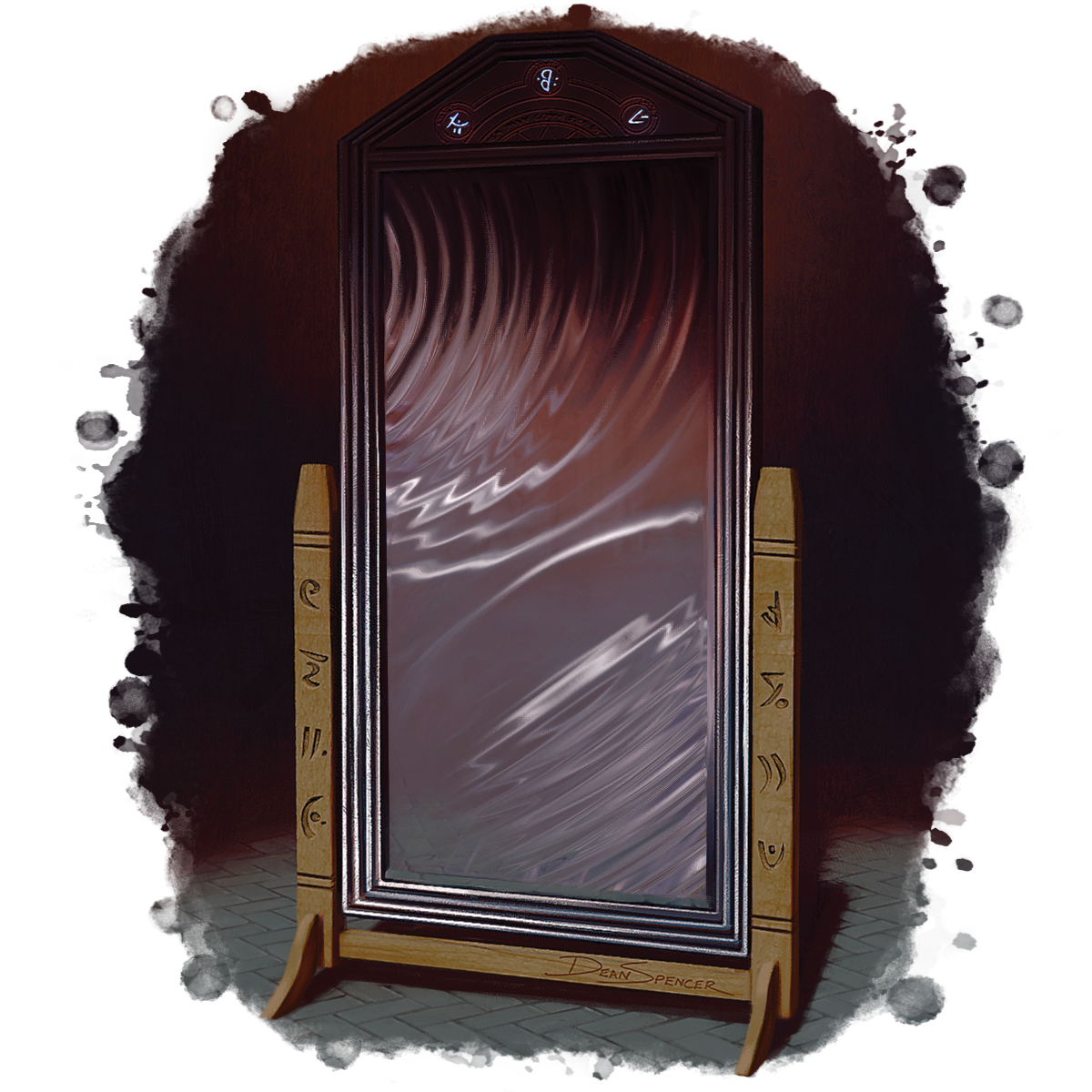 Challenging to find, the Veil hides from plain sight thanks to a hidden entrance surrounded by a maze of living mirrored glass. Like a manifesting Echo, this mirrored glass reflects light and casts a near-perfect reflection. However, the mirrored glass bleeds instead of cracking when damaged, protecting the city and itself when threatened. For the Echo and its mortal denizens, the Veil represents freedom from judgment and a second chance at existence.

From the neck down, an Echo resembles the humanoid they once were in life in height, weight and body type, except for an unnaturally blue hue or pale skin. Where the Echoes head should be is instead a polished reflective mirror. The mirror serves as the Echos face, eyes and mouth hidden behind the reflective surface.   While the mirror reflects, it is not glass but flesh and blood. It will not crack or shatter when struck but bleed purple blood. An Echo’s mirror-like face can be stitched and healed like typical bodily injuries. However, a creature that stares too long into an Echo’s mirror will feel its mind contort into an intense headache due to its unnatural appearance.
Lifespan
An Echo does not age and is mature after reformation.
Average Height
3 ft - 7 ft
Average Weight
60 - 300 lbs 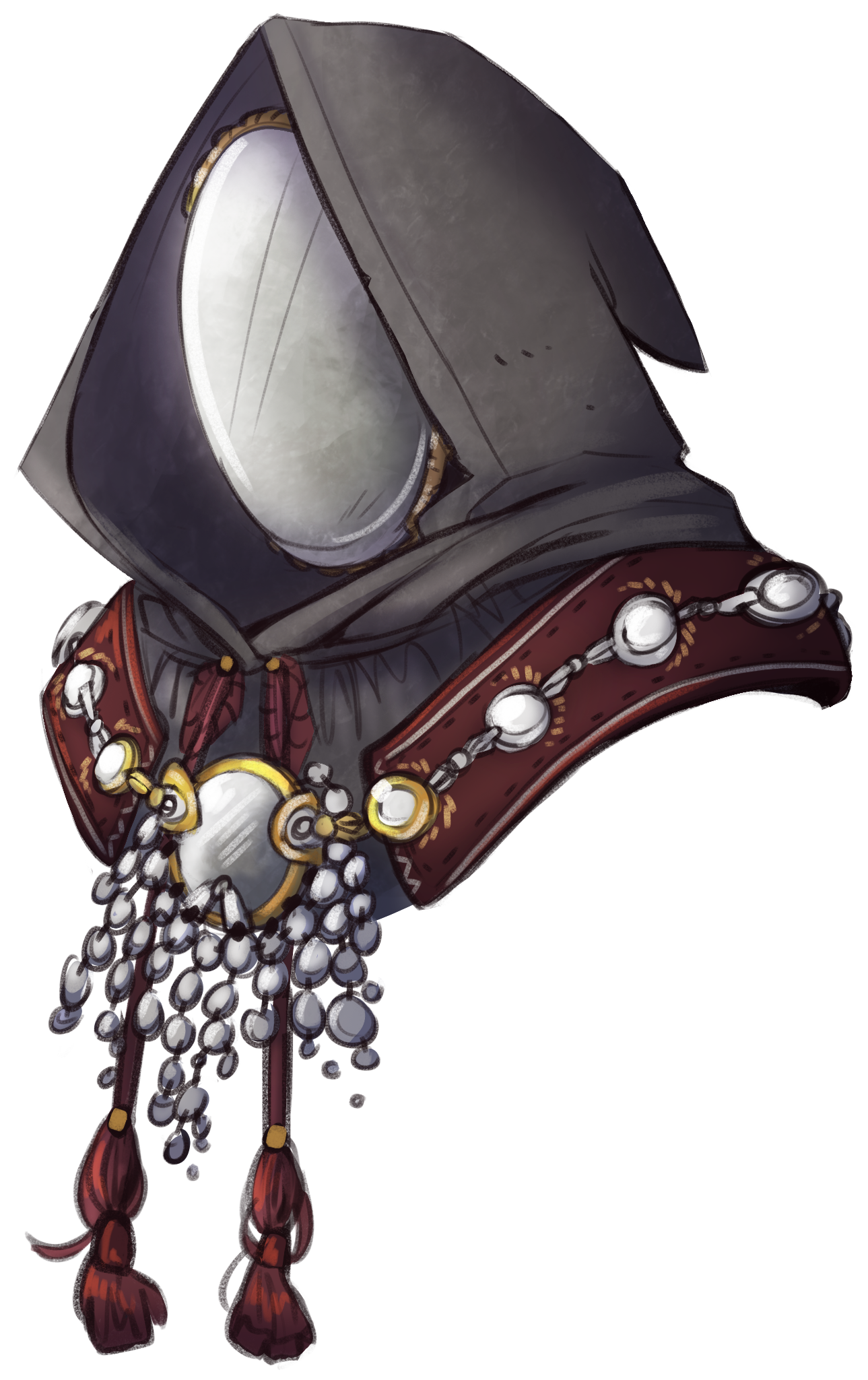 Like twins, two Echoes can bond in a cooperative spirit after spending considerable time together. Known as becoming “entwined,” the Echo begins to unconsciously mimic their partner, becoming a single soul living in two separate bodies.   An entwined echo acts like a single paired organism, with one mind, two bodies and one sole purpose. The benefits of such a union also come with significant risks. After entwining, the Echo cannot exist alone, and if one is injured or killed, it threatens both.

Your Echo character has a variety of natural abilities common with your ancestry. You will also pick one of the available sub races below.
Available only for Gamingbrew Patrons. If you are a Patron the race will appear below. Support Erenel⁣
Exotic Races
Join Erenel Discord!
A special thank you to all of Gamingbrew patrons, friends and family who make this possible.
A big thank you to Wizards of the Coast for the Open Gaming License and allowing a writer the chance to chase his passion. The Erenel Fictional Universe is presented under the OGL rules for 5th edition. All content and images, unless otherwise credited, copyright ©2022 by Gamingbrew Media, LLC.
All Rights Reserved.
Open Game Content: Except for material designated as Product Identity, the game mechanics of this Gamingbrew product are Open Game Content, as defined in the Open Gaming License version 1.0a Section 1(d). No portion of this work other than the material designated as Open Game Content may be reproduced in any form without written permission.