Expanding Mundane Equipment
As we further explore the many unique Erenel Kingdoms, equipment options, armor, and weapon offerings will grow! The intention is to provide a variety of new and exciting items, not overshadow equipment already in-game.   New weapon and armor properties are available with the ultimate goal of adding diversity to your table.   As a Dungeon Master, feel free to allow the provided options without unique properties if you wish. However, all item properties are designed to adhere to the design philosophy of 5E and have been playtested.
— Gamingbrew


The weapons used by the Vice and pirate factions of the Crimson Shores reflect their naval environment. While at sea, combat is heavily favored for the nimble and finesse. Better to have an evasive fighting style as the ship rocks wildly, or you may fall into the watery depths below.   Pirates of the Crimson Shores enjoy experimenting with crude black powders, resulting in explosive yet intimidating results. As black powder slowly expands across Erenel, this volatile and extremely experimental new weaponry has resulted in chaotic advancements. The development of cannons and smaller muzzle-loaded firearms is favored in the Crimson Shores, where a thunderous boom wouldn't call in the town's guard.   While effective, firearms are unreliable. Misfires are an unfortunate side effect of this exciting new weaponry.

When you roll an attack roll and the dice roll, before modifiers, is equal to or lower than the weapon’s misfire score, the weapon jams. A jammed weapon cannot be used until you use your action to fix the weapon’s malfunction.

The ammunition used from a firearm is destroyed upon use. All firearm unless stated otherwise use Bullets.
Bullet: 1 sp per bullet.

With the introduction of new weapon and firearm properties, a friendly clarification and reminder on specific rules. 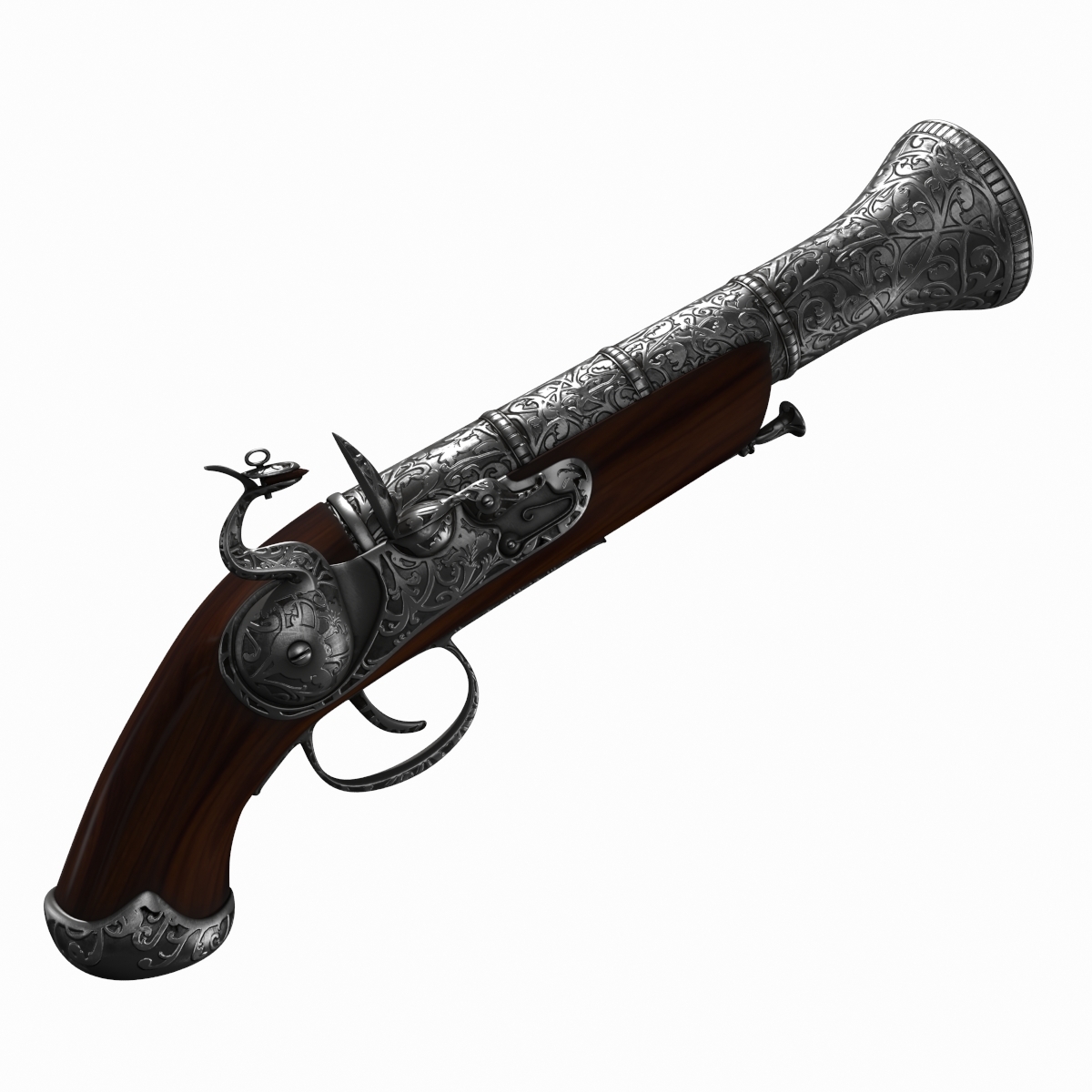 A blade that can attach to the barrel of a musket or two-handed firearm. The Bayonet can be attached or removed as an action. While attached, the wielder can make an improvised weapon attack with the Bayonet's damage.

Heavier than a handaxe with a significant spike opposite the blade, the boarding axe helps sailors and pirates climb up masts or into ships. When making a Strength (Athletics) check to climb, add double your proficiency bonus to the check.

A heavy flail made from a small anchor fashioned to the end of a chain. The chained anchor flail's chain is considerably longer than that of a typical flail.

A favorite among pirates, the short yet broad curved blade is robust enough to hack through heavy ropes and enemies while short enough to maneuver with in close quarters.

This oversized fishhook can be attached to the arm with leather straps and allows sailors with missing hands to lift or carry objects. For those who still have both hands, a handle under the hook can be held.

A one handed firearm, this loud, yet reliable weapon is the most popular firearm in Erenel due to its size and ability to use with another weapon at the ready.

A long barreled firearm capable of firing at targets from range with precision. If a bayonet is attached to the end of a Musket, melee attacks with the bayonet gain Reach.

Favored by whalers and underwater hunters, this unique firearm is fashioned to launch a spear instead of standard ammunition. Typically, a rope is attached to the spear to reel in the target.   The speargun uses a spear as ammunition. If a speargun hits a target, the spear sticks into the creature while the rope remains attached to the speargun. As an action, make an opposed Strength (Athletics) check against the target to pull the target 10 feet closer to you on a success. If the target attempts to move, you can use your reaction to make an opposed Strength (Athletics) check to prevent their movement on a success. You must continue to use two hands to maintain your grip. If the target can grip the spear, it can remove the spear as an action.

You have practiced extensively with a variety of firearms, gaining the following benefits.

You have practiced extensively with a variety of firearms, gaining the following benefits.

This work is licensed under a Creative Commons Attribution-NonCommercial-NoDerivatives 4.0 International License.
The Erenel Fictional Universe is presented under the OGL rules for 5th edition. All artists have been duly credited.If you would like to have your art removed, please contact me immediately.
System Reference Document 5.1 Copyright 2016, Wizards of the Coast, Inc.; Authors Mike Mearls, Jeremy Crawford, Chris Perkins, Rodney Thompson, Peter Lee, James Wyatt, Robert J. Schwalb, Bruce R. Cordell, Chris Sims, and Steve Townshend, based on original material by E. Gary Gygax and Dave Arneson. A special thank you to the many talented people who create the world's greatest role playing game.
Cover image: by BrittMartin