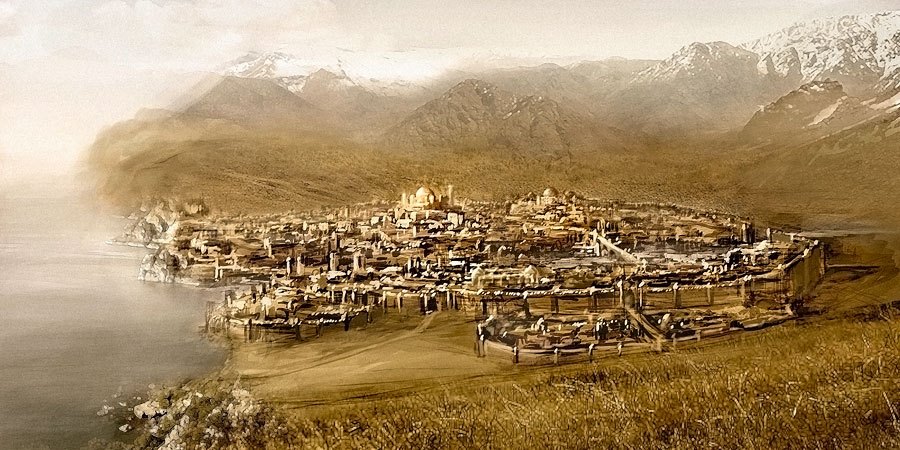 The City of Greyhawk, known as the "Gem of the Flanaess", is largest city in the Greyhawk campaign world. Located on the shores of the Selintan River, it is a center of trade and learning, and therefore a magnet for adventurers.   The Free City of Greyhawk is located centrally in the Flanaess, which is the easternmost part of the continent of Oerik on the world of Oerth. The city controls a large swath of land along the Selintan River from the Nyr Dyv south to Woolly Bay most of the Cairn Hills, parts of the Gnarley Forest, the northern Wild Coast, and parts of the Abbor-Alz. The entire region is officially known as the Domain of Greyhawk. The Domain is bordered on the east by the Abbor-Alz and its western border lies within the Gnarley Forest. The area south of Greyhawk City along the Selintan is known as the Plain of Greyhawk.

A language melting pot of races and cultures.

The most common forms of currency in everyday transactions among sentient beings were coins (or "pieces"). Usually, most coins were made of gold, silver, and copper.

Greyhawk’s Directing Oligarchy elects one of its own as Lord Mayor, who serves as the head of state in addition to his Directorial duties. The current Lord Mayor, Nerof Gasgal, has held office since 571 CY. The Lord Mayor heads both the Directing Oligarchy and the Council of Mayors and Manorial Lords. The chief of state also officially heads the military, though actual command is most often left to the Captain General of the Watch.

The Free City of Greyhawk is ruled by the Directing Oligarchy, an executive council of twelve to eighteen members representing the city’s major professional guilds and the military. In some cases, the Oligarchy may include important wizards and/or clerics. New Directors are chosen by current council members when a vacency must be filled.   The Greyhawk Public Council, in theory, serves the interests in the citizenry-at-large. This popularly-elected advisory body consists of eight representatives, one from each of the city’s quarters. The Public Council meets with the Directing Oligarchy on a quarterly basis.

Major legal matters in the Free City of Greyhawk are adjudicated by a Judge of Greyhawk, one of eight such officials appointed by the Directing Oligarchy. One of these eight is chosen to serve as Chief Judge of Greyhawk. In cases of great import, three Judges of Greyhawk may preside. Appeals of major cases are always heard by a panel of three Judges of Greyhawk, though the Lord Mayor sometimes sits in place of one of the Judges.   Lesser matters in Greyhawk City are tried by magistrates from the Guild of Lawyers and Scribes.