"Better folderol than another trip to the therapists."

At the boarding ramp, a small knot of lifeguards was scanning in all directions, determining if their principal was safe. In the case of the Second Meihomei Lifeguards, their principal was literally that, a prince, or princess, of the Realm, First Meihomei guarded Meihomei in person. It was not unusual for First and Second to deploy together, as the second in command of the realm, required for countersigning Edicts and other executive decisions, was a princess.

"Whoever it is, serious pull, look at that uniform, and that green-on-light-green..."

"Permission to come aboard, Zim?"

"Granted provided you let us return to the skies later, Zim and you are?"

"I am unimportant, please stand for Nameihomei."

"Stand for Nameihomei? Halt flight procedures! Keep us at stationkeeping, Pilot." Then FFOF-04 Harfang Piersa Ouranos stood, and saluted like her life depended on it.

"Well, aren't you parade-ready, Harfang. Please, all of you, sit, I just wanted a word with the Harfang."

"My son speaks highly of you, and of this crew, Harfang Ouranos."

"I have no merit, he and FFOF-07 Falcon Rolli set up the best squadron in the fleet, I just watch them do their jobs." Her humility was a bit much, Mikhala thought. It'd been six months since Flora or Amarat had any time to spare their old command.

"I doubt that, he did get narrowly missed for six counts of title 65."

"All base slander from his political enemies, from the accounts I've seen."

"And would you count as his political friend then, Ouranos?"

"I am his protege, if anything, his creature, any good I do reflects on him, and bad as well, and any good he does is his own, but any mistake he'd make, I'd make a convenient target for reprisal."

"Depressingly accurate, but that's not why I'm here."

"It'll sound silly, I was wondering if you'd organize his arnday party here, on Right-On, he always wanted a party in the clouds."

"We only have ten more minutes, Nameihomei." Piersa started, she hadn't noticed the Secretary of Defense just behind her!

"I can't take a skycutter without orders."

"But that's what I'm here for, Interjected CI-12 Kagomine Secretary of Defense Valias Herringbone I'm detaching Right-On from regular duties, ahead of refit, she'll be down a week for repairs and refit, you've all earned thanks, purple silks and crew rest."

'How did she know that nickname, oh, Amarat must still use it, it was his idea after all.' Thought Piersa.

"Make sure you stay in town though, you'll be summoned to the Kagomine Palace at Megamisama Aunday morning."

"Will you cut the formalities? We double-dated!"

"And I am Bameimeito, funny you notice I'm 3rdFLTTHISTLE, at all."

"Zim-Zim-Zim. No way, we get to the meet the legends!"

"Legends? What have you been telling the greenstalks?"

"You think I need to tell them stories? The crew practically revere you, just how many CO/XO pairs get personal awards and a unit citation for a merit in their first year on the job, do you know?"

"Sample size of one, It's the first time it's happened, in the history of the merit... There's not normally multiple personal awards and a unit award for a single act of bravery, you guys basically rewrote some of the rules for awarding the durned things! No wonder the rank and file think you walk on water."

"He's still under your command?"

"We follow your example, Falcon Rolli!" The two enlisted pilots said in unison. Flora had never felt quite so old, they probably didn't need to shave yet! Of course, neither did Amarat when they joined...

"Will you tell us a story, please?"

"Something that happened on right-on, anything, please?"

"Hush, Amarat dear, give them what they want, I'm sure they underestimate how life-breaking a Merit is..."

"I went from 'oh, I hope I graduate, when they let me return to the Academy...' to 'This... is an effing invitation to low tcha, with Meihomei! How do I deal with this?'"

"You got an invite to LOW tcha?"

"What, dear, are you jealous?"

"Insanely, I only get high tcha and so I never see Meihomei with her hair down, so to speak."

"Her hair's kept too short, but I know what you mean."

"Changing the subject, afraid of heights. Why, what's so special about the ship? I walked her deck, it's just a skycutter, not even armed."

"It's treaty authority, dimbulb! The twenty-five crew aboard are a flying control tower for all of Lai Dang Treaty airspace! No single aircraft or building has such a concentration of power, they tried to outlaw such a concentration of power, at Lai Dang, I was there! But then they realized, they had no choice! For us to respond to the invaders coherently, we had to work together, share information, and have proper spatial awareness."

"Ugh, Zim, I keep hearing what word, what is spatial awareness?"

"In the context of right-on? It means juggling a few thousand balls at once, never dropping one, in case it's a few thousand passengers, or a military aircraft, or 200 pilder suits and their cubic-gauche warheads. Basically, if you ask what it is, you've probably not been exposed to it, not in actual life-or-death, or you'd remember..."

"I swear I gotta write you up for post-trauma, Amarat, each time you mention Revenge, it gets scarier..."

"You're just as vulnerable as I am, we both saw those patients burning up, we knew what was at stake..."

"Revenge, as in that burning piece of Skycarrier, a floating, interstellar dreadnaught capable of incinerating anything without shields?"

"Anyone ever thought of adding shields to Right-On, just in case?"

"Err, no, she'd lose half her autonomy... And they never even fired at us... We never noticed at the time... Had to check after-action tapes, but they treated Right-On like a non-combatant because we never fired at them." 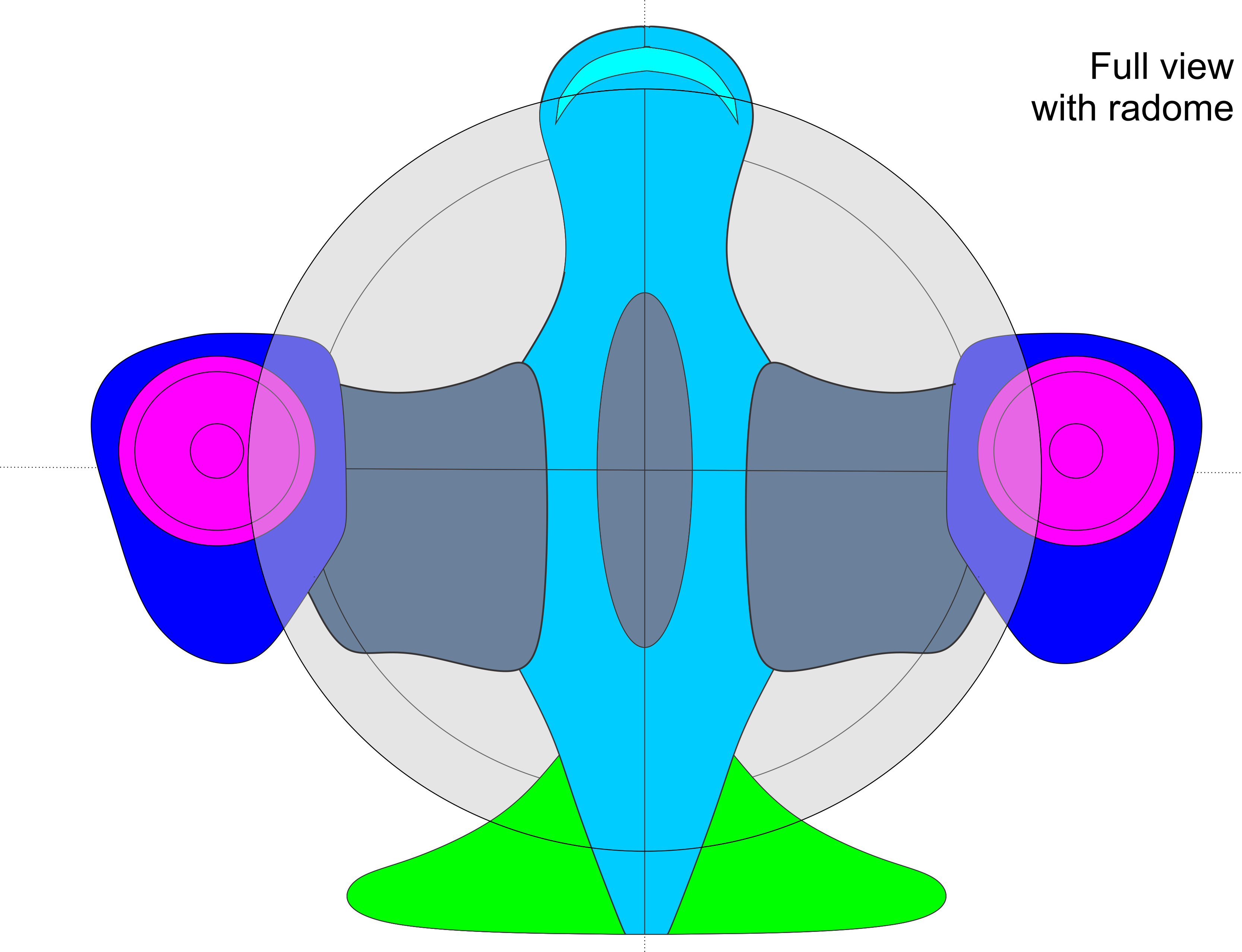 "So you're crew on the Righteous Indignation?"

"Are, I, FFOR-01 Dagger Alecto, have the honour of keeping electrical systems operating at optimal temperatures, aboard Righteous."

"Ah, sorry, no, I was chosen to replace one such hero, specfically."

"I, as a very junior NCO, was chosen to supplement the Kons aboard. I don't need to remind you who the most famous Kon aboard is, do I?"

"Humble, it's depressing, you'd think someone that famous, that heroic would look up from his shoes, from time to time..."

40% of the surface is covered by solar cells, generating electricity when available to complement the 12 ton dinitrogen tetroxide fuel cells on-board, generating all power.  The radome is a special case, the top of the radome is 100% covered in piezo-heliotropic cells, generating power without interfering with short-wave eletromagnetic signals.

1.8m radius vector-controlled ducted illimo fans in each wing generating 40 tons of lift each. This aircraft takes off and lands vertically, due to those propulsion systems, and can stay afloat for 36+ hours at a time. It is not, however, fast, it is subsonic, and has sluggish controls in a dogfight, which is it not meant for.

Each craft is unarmed, but as a command and control vehicle for a continent-sized airspace, they can call friends easily.

Self-sealing armored panels protect the fuel cells, whose bulky material itself provides some protection. The fuselage is composed of 1cm thickness of armor, enough to stop small arms fire.

Its Jade banks can and have run the airspace for southeast Asirania, stepping over: Because they were vectoring in defensive craft, and protecting the ground, such actions, normally a casus belli, instead resulted in thanks to Meihomei for swift action.

Class 6 Radome: Slate Otter's growl, 8m, frequency-agile midar(microwave intensification detection and ranging), based on a equillateral triangular arrangement of three radio sources. Each radio source itself is a regular icosaedral arrangements of dynamic butler matrixes. allowing for beam forming of multiple signals, dependant on frequency, desired signal strength and directionality of said signals. Computer control with a high degree of precision of these sources allow the emitters to save power/reduce clutter, which in turn reduces ghost returns. Any non-transmitting butler matrixes can also act as receivers, allowing more flexibility and sensitive reception.

Unusually for an airplane, but required by the mission of the airframe, which is basically a flying control tower, 10 bunks, 6 regular crew, two guests, and one each for the XO and CO of the airframe are available. Legend:

Two Pilder-class powered armor can be carried without loss of performance, up to six can be carried if they replace some of the regular complement.  This is very rarely done, as pilder armor restricts the ability to read a console, which is the airframe's primary purpose.
Class
Cormorant-class Airborne Early Warning Skycutter
Nickname
Right-On, internal name only used by the crew. But also, It, and its four squadmates are 'treaty authority' for rannick treaty airspace. Also: 'righteous' after its role in taking down Revenge this latter name only used within sixth fleet.
Designation
KTC-144
Motto
Do you feel lucky?
Rarity
25 Cormorants are permitted for all Arnd under the Treaty of Lai Dang
Beam
12m
Length
9m
Height
8m with radome, 5 without
Weight
65ton
Speed
890kph
Complement / Crew
25
Cargo & Passenger Capacity
1 passenger/military observer(optional)
0051st Imperial Kagomine Skycutter Squadron "Arnd Surfers"

You are the first article that i have seen to do the designation in what, in my opinion, is the correct way! I like the idea of a flying air traffic control tower. good job overall.