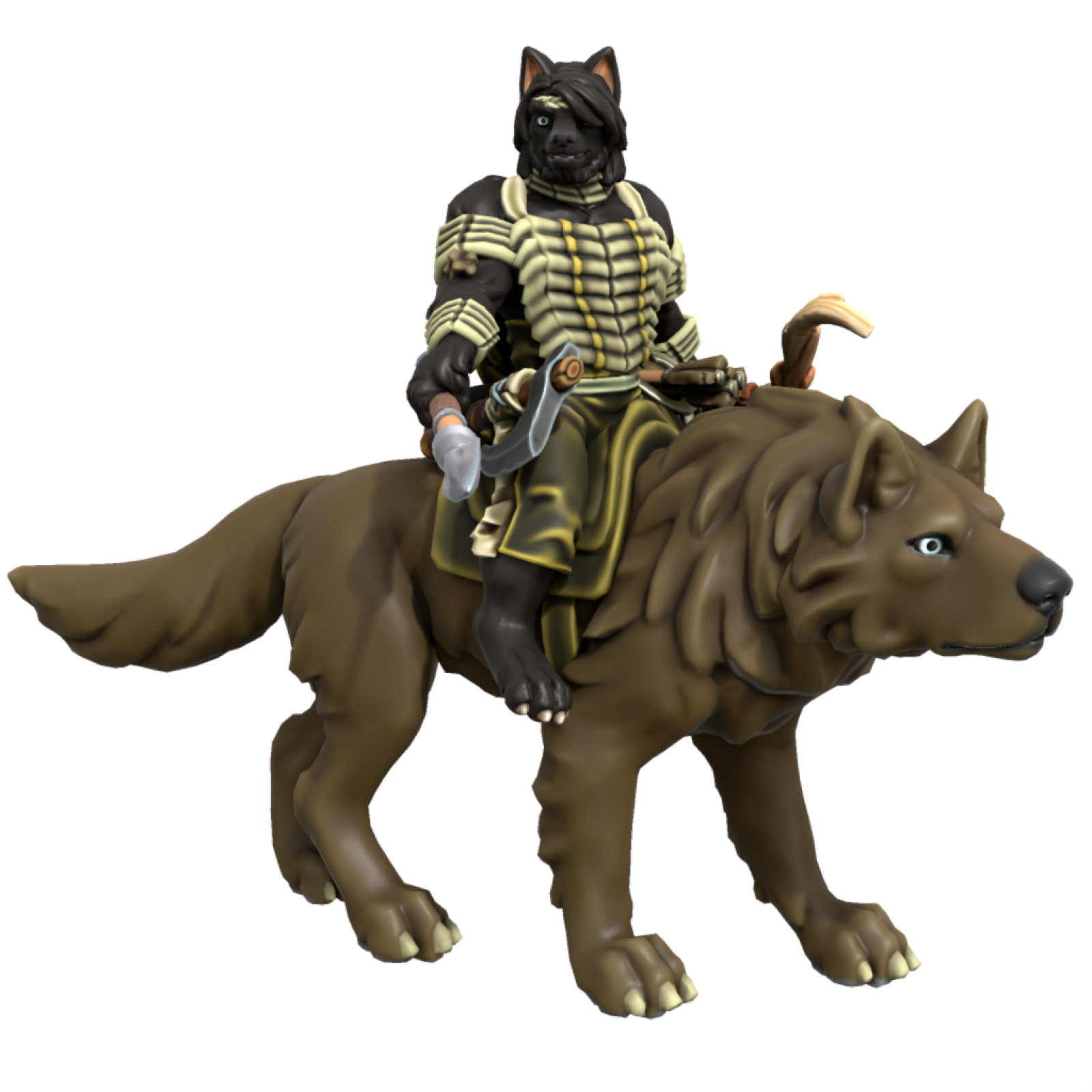 Toy Soldier Saga      Koira
The Koira, or Dogfolk as they are colloquially known, are a race of humanoid canines that exist in small numbers in Known Space , principally located around the world of Gorna.

Dogfolk have a generally upright stance with two arms, two legs, a single head and tail. They walk on the balls of their feet, like quadepedal canines, giving them a "reverse-knee" appearance. Their faces are canine, though they possess more muscles in the face and can make more expressive facial gestures then other canines. Their bodies are completely covered in hair, like dogs. Like canines, they have six nipples and the teats of female Koira are only swollen during nursing.

Koira look pretty much like generic dogs of mixed breed. Their appearance varies between short to long hair, white to black fur and either straight or curly to various degrees. Though they are an average of 1.8 meters (5 ft 11 in) and 85 kg (190 lb), Dogfolk as small as 1 m (3 ft) and as tall as 2.4 m (8 ft) at adulthood, and have a broad range of weight and build.

Dogfolk are mammals who reproduce sexually. The females, though sexually active from puberty, only go into "season" once every six months. Gestation is a length of 40 weeks, with the female giving birth to 2-5 live pups at the end of that period. Females go into "heat" roughly 6 weeks to 2 months after giving birth.

Dogfolk are born at a weight of about 2 kg (4.5 lb). Pups (as the young are called) are born blind, helpless, and totally dependent on the mother for the first 3 weeks. After 3 weeks, their eyes open and they begin to move around. They start by crawling, but swiftly move to all fours, and are fully walking by 10 weeks. Pups start to run before they are even used to walking (and fall down, a lot), but it makes them fully mobile without fear by the 6 month mark, and only dependent on their parents for basic necessities and education.   The ever-practical Koira design all their games with a learning bend to them. Sports teach the values of teamwork and cooperation, and reward good effort over winning or losing. Education in classical literature, mathematics, penmanship and other more "practical" arts, such as cooking, sewing, smithing, farming, ranching, and hunting are considered paramount to a youth's education.   Youth are encouraged to love and respect their elders, to be deferent to proper authority but intolerant of "bullies", and to be gregarious and forthright with their peers. Youth also learn that lying to one's elders is generally useless and they are strongly discouraged from lying to others who may not be as attuned to their senses. By the time the youth reaches puberty, lying is really quite beyond them.   At puberty, beginning around the age of 10-12 standard years, and lasting until about 15, the Dogfolk is fully developed, except hormonally. Until the Koira is about 20, they are still an adolescent, though they become less ruled by their hormones, and more grounded, as they grow up.   From there, not much changes until females go through menopause at about age 40 and males get a serious spike in the estrogen department, and a sudden lowering of testosterone at about the same time. After 40, the Dogfolk finally succumb to old age at about 80 years.

Dogfolk are well-adapted to any environment that mammalian humanoids find hospitable, though in general, they have less impact on their environment than humans do.

Koira are omnivores but prefer a high protein diet, and that usually means meat and fish. Because of this, hunting in packs is still a common pastime for young Dogfolk, who prefer wild game to domesticated livestock. When hunting, Koira use weapons appropriate to the hunt, such as bows, javelins and spears, but it is considered a sign of great hunting skill to finish off the animal with one's teeth.

Dogfolk are hierarchical and feel a strong need to know their place in the world. Though they need to know their role, and where that role stands in the hierarchy, they are generally content with their place, so long as their immediate superior is competent. If not, that hierarchy will be challenged. This doesn't usually mean violence, but it does mean challenging their authority, at every turn, until they prove qualified, or disqualify themselves somehow. If an unruly or rebellious Koira is asked, "do you think you can do better?" their answer will almost always be "Yes!"   Dogfolk of all genders take well to any group that are clear about the dogfolk's position and responsibilities, so they work well in a military structure. A dogfolk with a capable superior is even happy to be the "low dog in the pack" so long as they are "part of the pack." This Canus attitude insures that among the Koira, the most competent and best suited person rises to their highest level of proficiency.   On the same note, a Koira doesn't mind, and in fact expects, to be deposed by a junior who proves better in the role. The key word is "proves" -- a self-respecting dogfolk will not give up his position without a fight. That said, a dogfolk would never challenge a leader, unless they sincerely thought that they could do a better job, and a leader who has lost their self-respect through failure will almost always concede the challenge.   This is not to say that Koira social structure is fluid, at least not at the top. Near the bottom, what separates a qualified leader from an unqualified leader, is far closer than what separates the Alpha from the Betas. For a Beta to challenge the Alpha, there must be considerable malfeasance by the Alpha. This includes mental illness that impaires their judgement.

Within the social structure of other races, such as a military, a dogfolk will attempt to legitimately rise to the highest position he feels confident in executing, and that they will let him get away with. Dogfolk do not tolerate fools in command of them, and in a combat situation, a dogfolk led by a fool, will either usurp the leader's position by whatever means necessary, or desert with the rest of the "dogfaces" (or as many as he can convince) as soon as possible, if the former is unlikely.

Felt made from the shed or cut hair of a Dogfolk fetches a high price on the market, as it is considered superior quality. Koira are often exploited for their sensory ability as trackers.

The faces of the Dogfolk resemble dogs. They do however have considerably more expressive faces than their canine cousins, as they have more operating facial muscles.

Dogfolk claim to have come from the stars from a place called Efin, though whether this is a country or planet is unclear. Scholars tend to believe that Koira are a natural evolution of the Wolfen though they are not clear on whether the Wolfen are indigenous to Gorna or not. The Dogfolk are principally found around the Kingdom of Koiriar.

Koira have about average intelligence for sapient beings in Known Space. However, all Dogfolk have eidetic memories, especially when associated with scent. The drawback of such a perfect memory is that they can also recall trauma with perfect clarity, and the number of Dogfolk who suffer from trauma-related mental health issues is considerably higher than other sentients.

Dogfolk names are are formed by making pleasent throat sounds in the mouths of the parents. The sound the pup responds to becomes it's name.

The Koiran Hegemony - A singular nation of Dogfolk made up of united Warrior Houses, Trade and Artisan Guilds, and Influencial families, united under Alpha Hggror the Reborn, who claims to be the reincarnation of an ancient Dogfolk Folkhero named Rawrnol Girt, a figure said to have been the first to unite the Koira on the world of Efinia. Though this has vaulted him to popularity with the people, scholars are sceptical as to whether or not King Rawrnol even is a historical figure, and most scholars generally believe the Efinia is a metaphorical place, like Heaven, or Olympus. 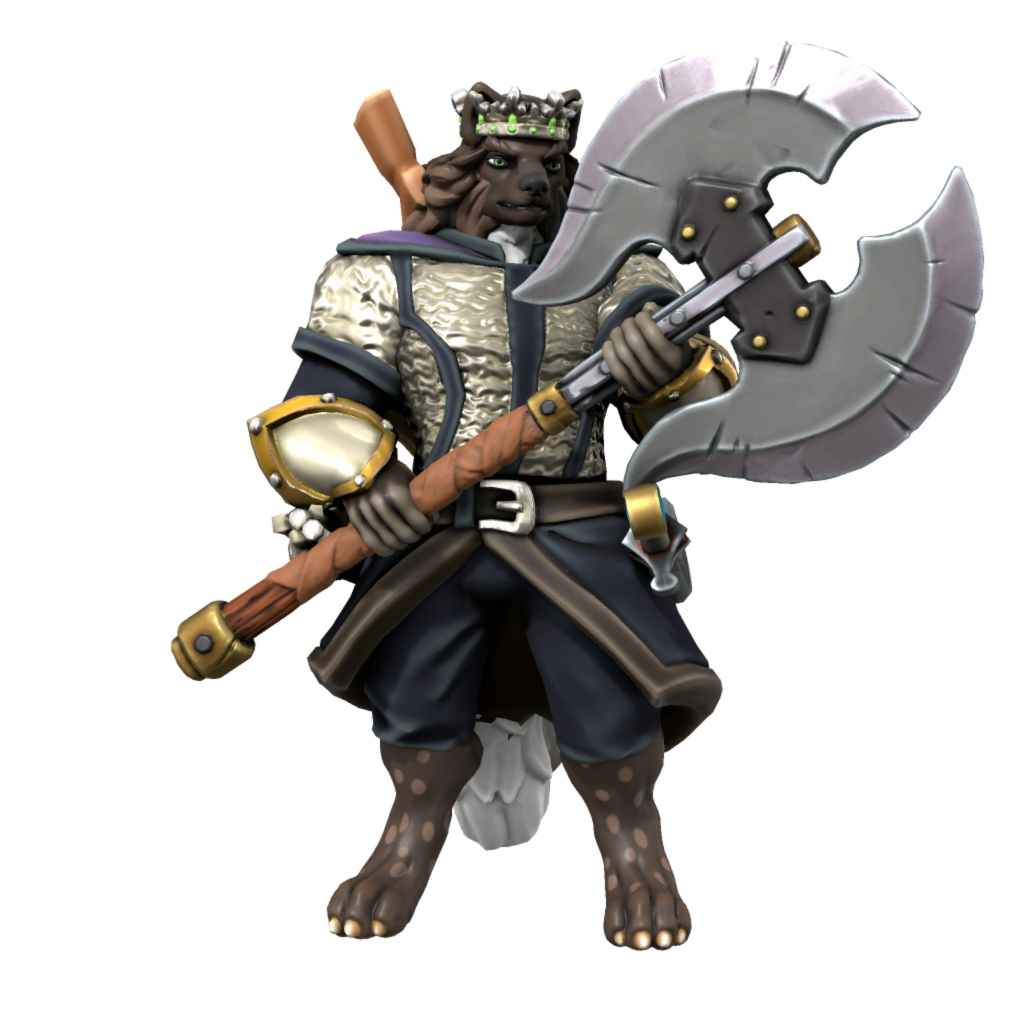 The 48 Warrior Houses - When Hggror united the Koira, he subjugated 48 Warrior Guilds under his banner. Originally 55, seven of the guilds were destroyed in the takeover, but the other houses were given places of honour in the New Hegemony. These 48 houses comprise the army divisions of the Kingdom and are roughly made up of 10000-15000 warriors this makes the entirety of the Dogfolk military about 600,000 Warriors, roughly 5% of the total number of Dogfolk in the Koiran Hegemony. 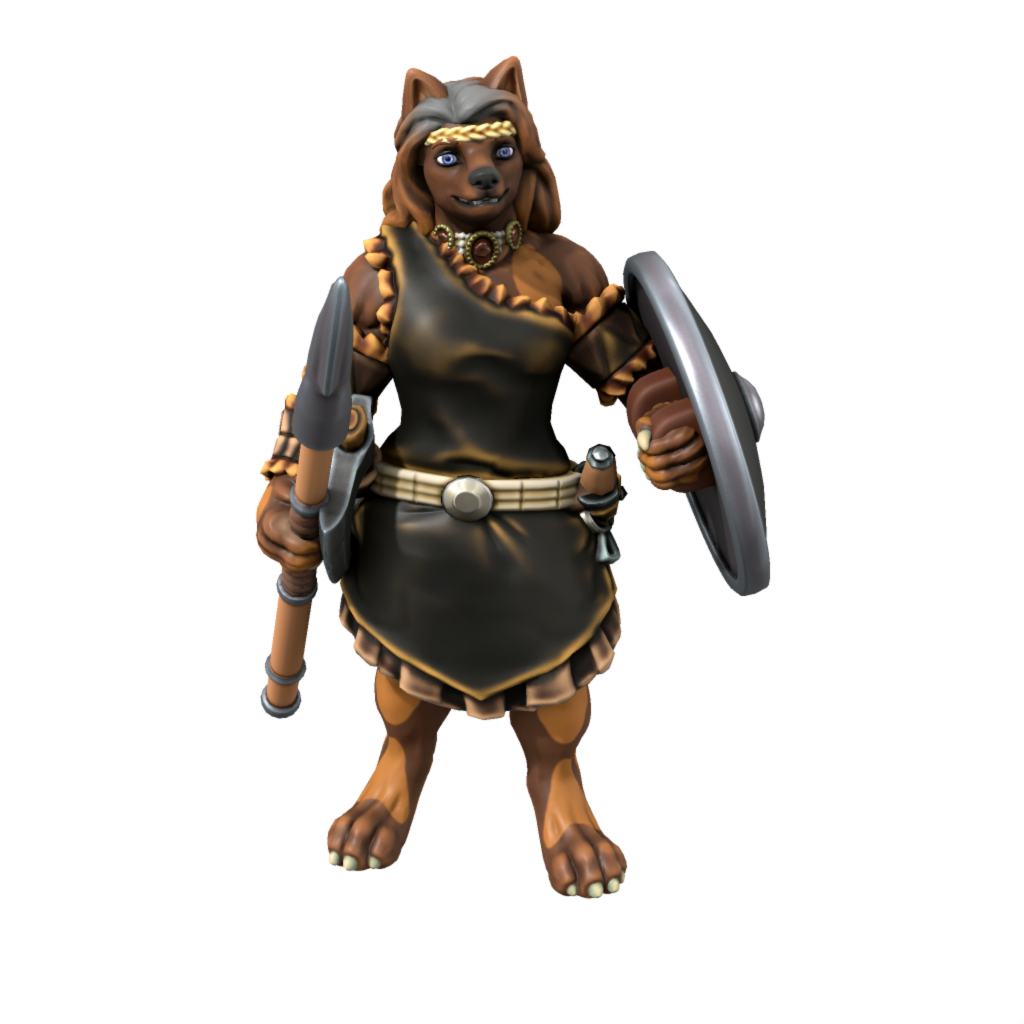 Scientific Name
Homo Canus Sapiens
Origin/Ancestry
Efinian Dogfolk
Lifespan
80 standard years
Conservation Status
Koirans are rare enough in Known Space that most scholars consider it a great affront to try to kill one. As a gregarious, free-loving species, there is usually little need for violence with them anyway, though they can be quite vicious when angered.
Average Height
1.7 - 1.9 meters (5 ft 7 in - 6 ft 3 in)
Average Weight
80 - 90 kg (175 - 200 lb)
Average Physique
THe average Koira is physically fit, with obesity being rare among the Dogfolk.
Body Tint, Colouring and Marking
Dogfolk most commonly look like shaggy mixed-breed dogs crossed with humans. They are most often brown, but any colour between white and black and even multi-coloured Koira are not uncommon. Dogfolk of all hair lengths, from Afghan Hound to Chihuahua are known, though some are more common than others, and the average fur length is somewhere in between. Appearance has a lot to do with generativity, and most litters will resemble their parents, and each other. Rarely, a single pup will not resemble either parent, likely indicating a throwback to a previous ancestor.
Geographic Distribution
Discovered by
Drathnar Strongarm
The Koira originally came from the Koira of Efinia, created by Kajetan Krakowiak-Świątnicki. Check out his original article, and his world, here!

~ Thank you for your support! ~
If you couldn't tell by the elves, orcs, and magic flying sailing ships in space, this is a work of fiction. Any resemblance to people or locations, living or historical, is purely coincidental, with the exception of Alberdingk Onestone, who may actually be an alternate dimension's version of a famous scientist, only as a gnome.
The Toy Soldier Saga is copyright (c) 1995 by Diane Morrison. All rights reserved.
Article template
Species
World
Toy Soldier Saga
Author
ErinRigh
Publication Date
13 May, 2021
Creation Date
9 May, 2021
Last Update Date
14 May, 2021
Visibility
Public
Views
328
Favorites
9
Comments
1
Work In Progress
Tags
Koira dogfolk

Loved all of this, but my favorite part had to be the bit about naming conventions ("Dogfolk names are are formed by making pleasent throat sounds in the mouths of the parents. The sound the pup responds to becomes it's name."). Great work here!