To master the Kandari is to master the dragon. Only through judicious use of the item can the beast be tamed.

~ Le Neth ka Zey to Ivore, from the poem Kan Ivore
The Kandari is the artifact of Kykini Cede, Flame Dragon of Kassak. It is found within the Grand Chamber, reached by traveling through the Glass Volcano, his lair.   Kandari means "Flame Stone" in Catak. Most Seari languages refer to it as the Flame Stone or Fire Stone.
all artwork by Shanda Nelson
Shiobe and Sikode enter the Glass Volcano in search of the Kandari. They are the first to do so since Eserial mastered the artifact 2600 years ago. Why is that? Most Searian residents believe dragons are myth. 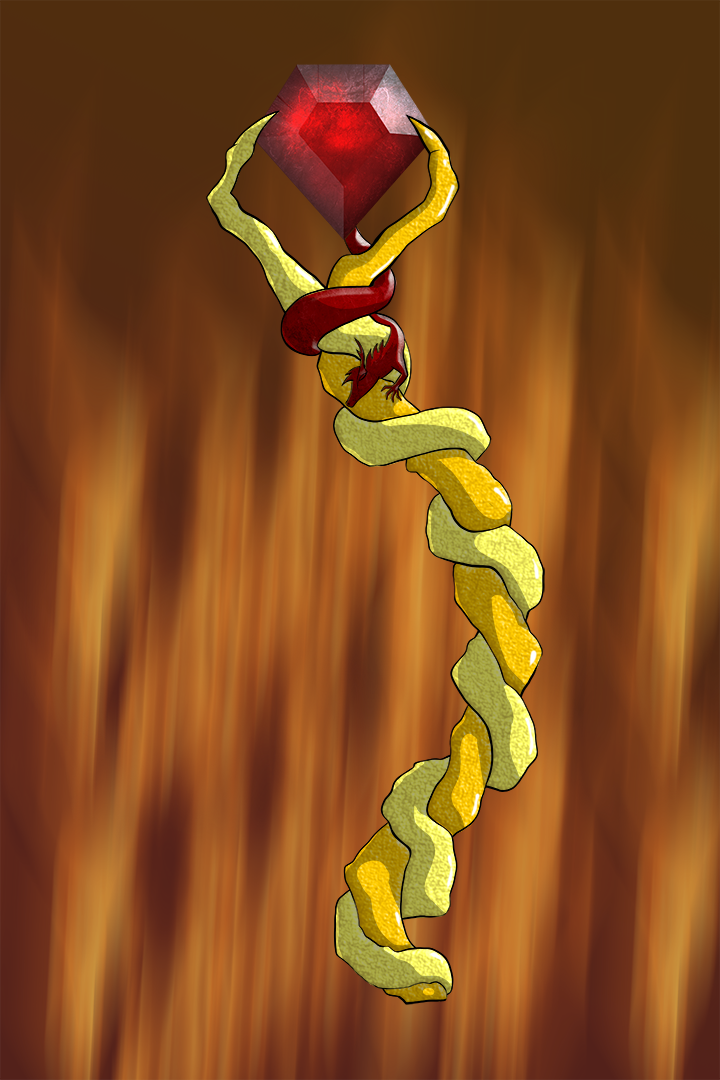 History
Scholars debate when the Five Dragons began to use wands topped by gemstones as their primary artifact. Some believe the idea originated with the Earth Mother Dragon, Gada Kiore, and her sylf-blessed Earth Staff. Some thought they developed over thousands of years as the final treasure dragon companions received, altering and changing to better accommodate the honor. Whatever the case, the Kandari and the Flame Dragon have been linked in myth and legend for thousands of years.
Appearance
While the wand has changed appearance over the years, a red gemstone is always present. The exact gemstone is debated; some think it a ruby, some a garnet. A few claim it an exceedingly rare red diamond, but most scoff at that due to the size. The Kandari is the gem, but in common reference, it is used to denote the entire artifact.   The last known Flame Dragon companion, Eserial, described the wand as a palm-sized red gemstone held in place by golden claws that curved down and wrapped themselves about each other for the handhold. A red dragon circled the claws just below the knuckles. Researchers believe that the overall appearance of the artifact reflects something about the human who wields it.

Purpose
The Kandari's primary purpose is to initiate the final challenge for would-be dragon companions who successfully navigate the other Glass Volcano trials. How it does so, and what this trial is, remains a mystery. Both dragon priests and dragon companions kept silent on it, so researchers guess based on hints and a few outlandish myths.   Anyone, be they warrior or wielder or weaver, can attempt to find and master the artifact. They simply must survive, reach the Grand Chamber, and take it from its golden altar. Scholars have a myriad of guesses as to what happens after the acquisition. Some claim:     Whatever trial it initiates, when a potential companion is successful in overcoming the final test, they become a dragon companion. The wand is their official symbol of this relationship, and they carry it wherever they go. Dragonpriest writings claim it links the companion and dragon, with the connection failing only at the death of the human. They do not elaborate on the nature of that connection.   Over the centuries, the Kandari has been ascribed other purposes, like communication and shielding device, controller of the lair's lava, and lighter of ritualist bonfires in the crater, but scholars tend to believe those descriptions a writer's fantasy, rather than an actual use.
Why dragons have an artifact that binds them to a human companion in the first place is yet another mystery.


Reaching the Kandari itself is a trial of strength, endurance, and intelligence. The stone is considered the final prize by humans, but it is the favor of the Flame Dragon that is the true treasure. Most companions do not look at it that way, and this has caused friction between the dragon and several of them.

Companions have written that holding the Kandari fills them with warmth and a sense of rightness that proves addicting.
The Glass Volcano
Summercamp 2021
Kla ra di'neri Caravan

Answering: "an ancient and/or powerful artifact"
Visit Kwyn Marie's Competition Page Check all other answers to this prompt Competition Homepage