The Hummelverse    Trivia      Interacting with the Environment
Vehicles can interact with their surroundings in ways similar to humans.

Like us, vehicles see, hear, and smell the world around them. Despite what some claim, they don't have a sense of taste.   They possess optics in several places on their hulls and turrets, which can be used independently to see. Thus, they usually have a view of everything around them, even though that view is greatly limited by the quality of their optical equipment and the fact that usually optics are just small slits to protect them from damage. They also have their gun sights, which allow them to see things farther away than their optics can see.   SPGs have their special sights, the Artillery Sights, which enhance their ability to perceive the world around them.   Most vehicles aren't equipped with sufficient nightvision, which makes them see as poorly as humans do at night. They can use their headlights, and artillery sights don't require light, but true nightvision is reserved to very few. Therefore, battles at night are very unusual.

Every vehicle possesses something that could be best described as 'tiny robot arms'. They use them to pick up and move things of up to medium weight. For example, they could use them to lift a tractor tyre, but not another vehicle.

Therefore, the vehicles have a certain range of autonomy:
Reloading - All fighting vehicles have an automatic loading mechanism. Depending on how skilled they are at operating it, they may need a longer or shorter time to reload, within the boundaries of their average reload time. Ammunition is resupplied through ammo hatches.
Refueling - Fuel is consumed by simply grabbing a can and pouring it into the vehicle's intake.   Many other tasks can't be fulfilled by regular vehicles however, which is why tank recovery vehicles exist. They perform upgrades and maintenance, and various other things that require either fine motor skills or special equipment like cranes.

Interacting with Each Other

In everyday and casual contexts, vehicles simply talk to each other by using their 'voice boxes' - a device seperate from their radios that is used to synthesize speech. This is also how they communicated with humans. Their 'standard' voices are randomly distinct from each other to distinguish individuals more easily, but can be altered deliberately.   There is also the option to communicate nonverbally through their radios. For more information on radio communication, see this article. 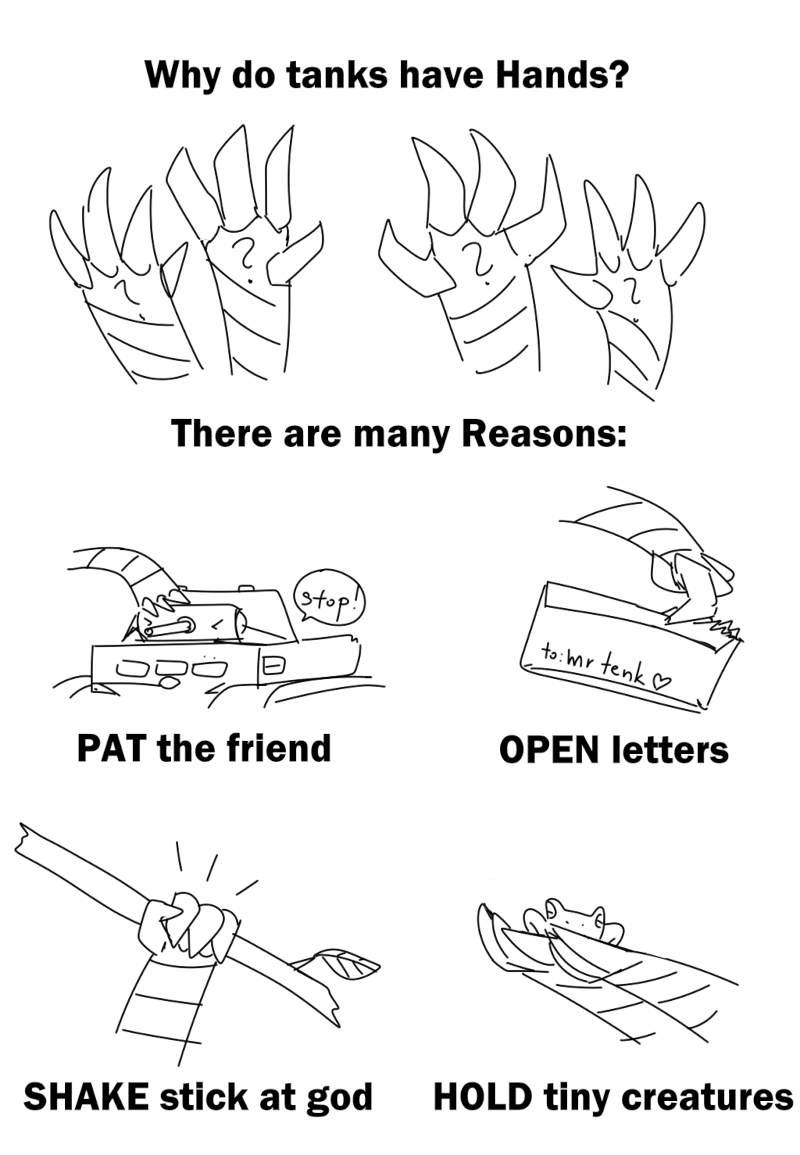 Environmental Hazards
The main natural hazards for vehicles are extreme weather conditions. Trivial causes of death caused by their environment are freezing, drowning, falling off cliffs, getting bogged down in bad terrain, and so on. Going too close to extremely radiated areas can also be harmful to their technical components.
Trivia

The Hummelverse and The Tanking League are my creation. All content - including art - on this page was created by me, unless otherwise stated.
Want to submit content like fanworks, ideas, characters? Please note that you are accepting these terms if you do.
Back to top
Cover image: by S. Ignatiev
Article template
Generic article
World
The Hummelverse
Category
Trivia
Author
arty
Publication Date
5 Apr, 2020
Creation Date
8 Apr, 2018
Last Update Date
20 Apr, 2021
Visibility
Public
Views
789
Favorites
8
Comments
2
Work In Progress
Tags
trivia

I can relate   I too furiously shake stick at god

Relatable tanks, you never expect them but here they are!

I enjoyed reading this article.   Are there internal arms that do the autoloading? How do they perceive the intake of fuel, oil and ammunition? Is it enjoyable? Are there common ammo types they prefer? What about tracks? Are they more like shoes or toenails/hoofs for a tank?   So many details I need to discover about this adorable little war machines!

The internal arms are the same as the external ones - in the "default" state, the arms are inside the tank and only get extended outside it through panels.   Intake of fuel is mostly enjoyable because it makes their fuel tank not nag them about being hungry; tanks don't have a sense of taste, though, only smell. Maintenance like oil changes and loading ammunition are usually perceived as a bit of a hassle, but necessary.   They prefer whichever ammo makes them kill the enemies most efficiently. :D   Tanks don't have any feeling in their tracks, so they're more like a horseshoe for them.

Ahhh, that makes sense that it's only one set of arms.   I would add that to the Article as the overall "anatomy" of the tanks is a bit undetermined :D   Thanks for the info!

Good idea! I will definitely fix that.