A Scientific Look at the Human Species

The Hummelverse    Trivia      A Scientific Look at the Human Species
This article reflects the contents of a scientific paper on the Human species, written by the well-known TRV humanologist by the name Scanie. She has dedicated multiple years of her life to researching human relicts and documents, to study their species' biology and behaviors.

The following paper will document the findings of Scanie of the Mirror-Lake Fortress. The author considers herself an expert on the field of humanology and has researched the topic extensively over the past 4 years. Topics of this paper will be anatomy, diet, habitat, and social structures of the extinct precursor species known as the Humans.

The appearance of humans is well known in our time, however the author will describe their common morphological traits in case this knowledge may get lost in the future.   The typical human stood about one and a half meters tall, on only two train-like legs - without the need for additional legs to stand upright and move. Their bodies only featured two arms instead of the common four or more found in machines. Similar to most of their fellow animals, humans had a neck and a head, the latter possessing a very short snout and two small, forward-facing eyes.   Much like machines, they were unable to function in very cold surroundings, something that they circumvented in a similar way as we do - by wrapping their bodies in available insulating materials. Clothes were definitely a human invention that we adopted from them.   Something that made humans distinct from many other animals, yet similar to some of them like fish or insects was their overall lack of fur. Usually, only their heads would feature short or long fur in different coat colors, but some depictions show that some of them also had fur in other places on their bodies. This and other traits suggest that they may in fact be closely related to fish, a theory which has been dismissed on occasion. It is however supported by ancient documents and depictions that the humans themselves made of their species, which frequently show humans whose bodies feature fish tails instead of legs.   From other depictions, we know that some humans possessed other additional limbs like bird-like wings, or horns such as the ones a hoof-animal would wear on its head. These creatures are believed to be subspecies of humans, and appear to have been very rare, commonly regarded as sacred beings by their peers.

We don't know for sure what humans ate and drank on a regular basis. Some documents exist that are written in latin alphabets, which seem to be manuals for preparing human food. They are usually titled something like "Recipes" or "Recipe Book", with slight variations. Efforts to catalogue these manuals and their contents or titles have been very sparse.   We know for sure, though, that the tools and methods required to prepare food for humans were much simpler than what machines employ to process their fuel. An example of these primitive tools would be the small, round metal vessels that can be found in abundance in human ruins. Preserved texts from the recipe books suggest that these vessels were used to heat up raw food to make it edible, and that the humans called them "pots".   Though very small by our standards, it appears that one pot was large enough to process enough food to sustain a whole family of up to four humans for an entire day.   In regards to frequency of food consumption, humans were very similar to us or other animals that are still around - we have reason to believe that they had to eat at least once per day and would starve if they weren't able to do so for a long time. There is something very peculiar about the human body and its attitude towards starving, however. It is well-documented in various media that humans had the baffling ability to store food inside their bodies for an extended amount of time. The size of their body would grow. Like a tank upgrading to a heavier frame, the humans would grow additional meat on their body, which we believe they could later access in a period of scarcity to avoid starving quickly.   This ability is also observed in other animals, which are born very small and can grow to much larger sizes. Machines can in a way emulate this useful ability by adding additional reserve fuel tanks to their frames, but the feat of growing through simple fuel intake is not something we possess or could achieve with our present technology, unfortunately.

The author has concluded through her studies that humans were highly social beings. A lone human getting lost and perishing as a direct result of this is a common theme - it appears that they were not able to sustain themselves without a pack. Their social structures were very similar to ours, although less varied and less rigidly divided. Their typical social circle consisted of a family, but unlike machines, humans would trace back their family members through multiple generations.   It should be noted here that a "generation" in the human sense meant something slightly different from how we understand the term nowadays. A human generation referred to human youngs being born of the humans of the generation before them. To the average tank, this concept may be difficult to grasp, but it is possibly explained the easiest by comparing it to directly successive tank designs.   To give an example: If a King Tiger and a Tiger I were humans, the King Tiger would be the child of the Tiger I, and thus its next "generation". The important difference is that the human biology, once again in accordance with their animal origins, did not improve between generations as far as we're aware.   Apart from the families, humans used to interact with each other in friendly ways. Similar to clans, they would choose to associate themselves with a large circle of fellow humans that pursued the same interests or goals.

Humans were endemic all over our world, known and unknown. We can find the ruins of human settlements in the most extreme of places, though a common preferred location for those settlements seems to be near water. This makes sense when we consider that animals require much more water to function than we do, and much more frequently. A certain affinity to water may also be related once again to their fish ancestry - it is well-proven that humans used to be excellent swimmers and were able to dive in a controlled manner.
Lifespan
up to 60 years
Average Height
1.5 meters
Average Weight
up to 150 kilograms 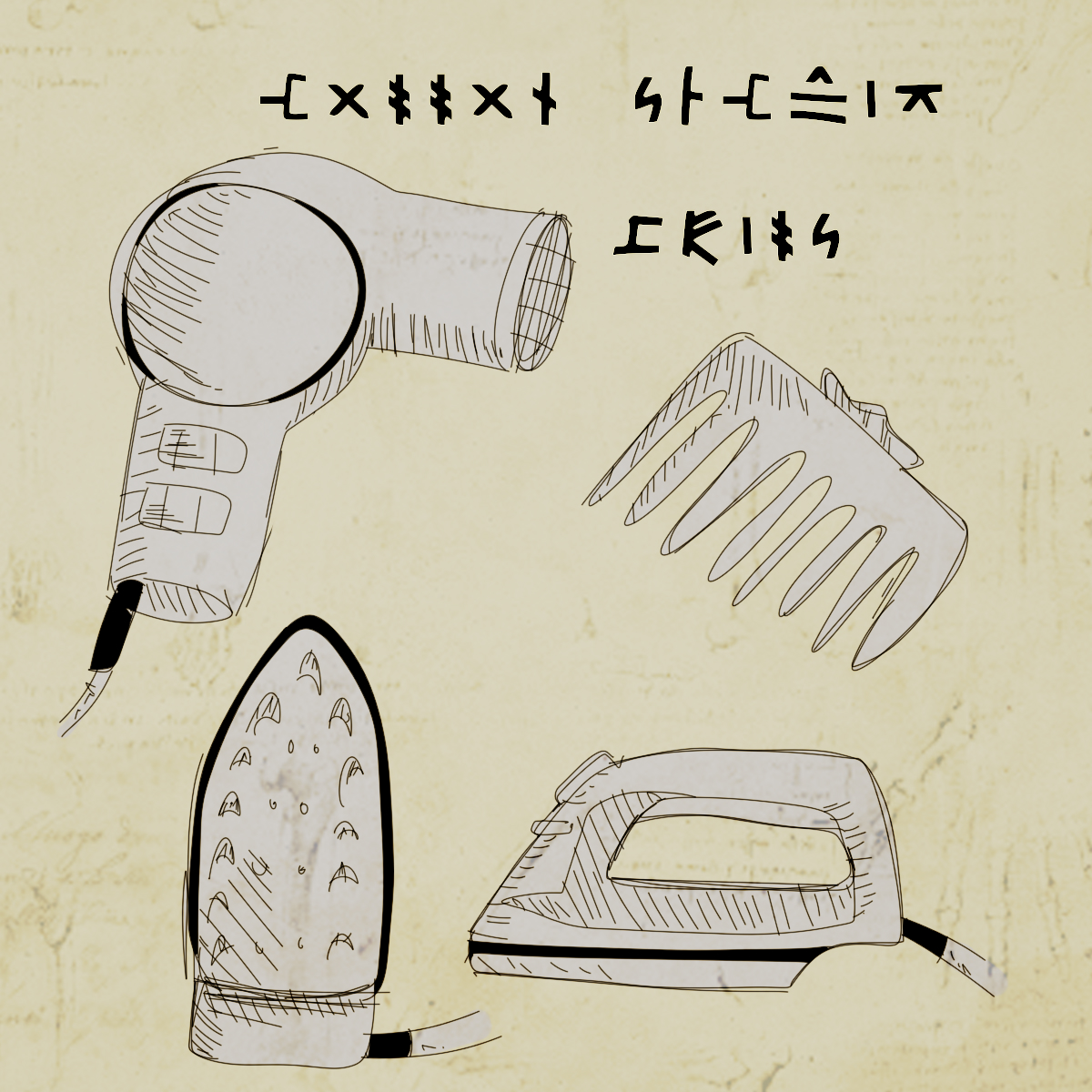 Above are artists' depictions of common items found in many human buildings. The use of these devices is lost in time, but it is strongly believed that they served a ritualistic and/or religious purpose.   Humans are known to have been believers of the Old Faiths; those are religions that existed before our own spirituality and featured the common themes of human-like deities. It is unknown how prevalent religious faith was in human societies, but the very frequent occurences of religious themes in human media and language suggest that most of them were believers. 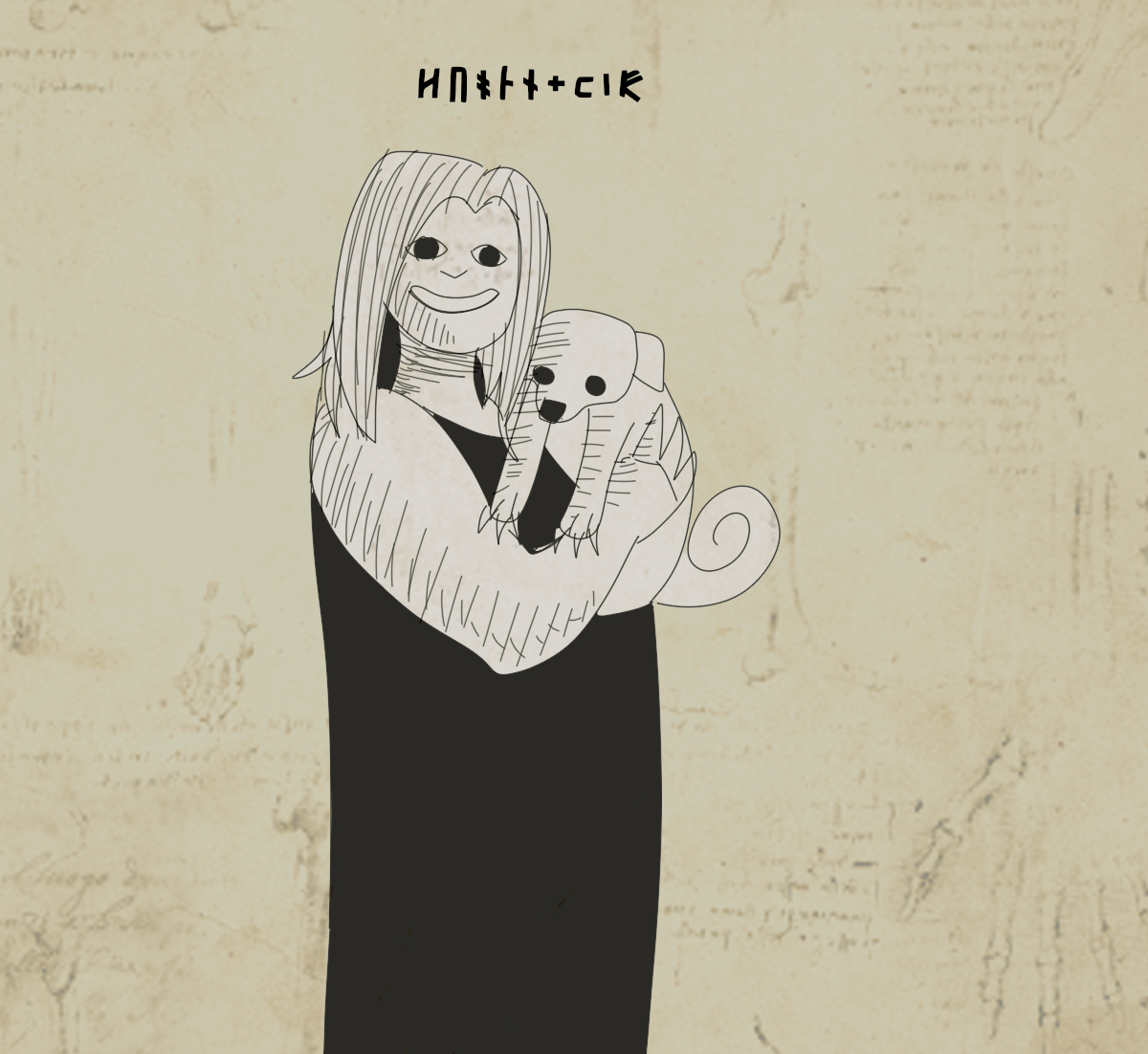 A very interesting, yet unexplained human behavior was their affinity to other animals. Plenty photographic and written evidence exists that they would form bonds to other animals without any apparent practical use for the humans themselves. Above is a facsimile of such photographic evidence, rendered by an artist. The original picture depicted a human holding a young wolf or dog.   It is of note that the facial expressions of humans differed from those of other animals rather drastically - this human is not afraid or angry, as one would assume from the bared teeth. Rather, humans would employ this kind of expression to display joy.

The Hummelverse and The Tanking League are my creation. All content - including art - on this page was created by me, unless otherwise stated.
Want to submit content like fanworks, ideas, characters? Please note that you are accepting these terms if you do.
Article template
Species
World
The Hummelverse
Category
Trivia
Author
arty
Publication Date
29 Jul, 2020
Creation Date
29 Jul, 2020
Last Update Date
30 Jul, 2020
Visibility
Public
Views
1033
Favorites
39
Comments
3
Tags
humans

What a great article, kind of a Through the Looking Glass of Humans.

Thanks! It was a really fun challenge to write this, looking at something familiar as if it was alien and strange.

This is a great bit of lore from the perspective of your world, but it's also a wonderful tongue-in-cheek takedown of how badly we can misinterpret or talk down on cultures when researching them, as well as a great show on how we may misinterpret findings overall!

Absolutely agreed, Ademal. I often postulate that future generations will theorize that we worshiped crystal boxes, then screens, as important religious idols. We do, after all, keep them in the activity center of our homes :D

Thank you! That was exactly the idea I was going for. :)

Could not have said it better. This is a treasure of an article. 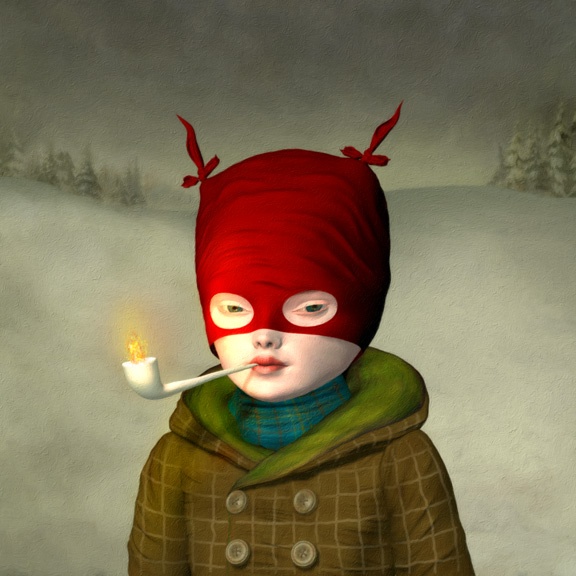 This is just an amazing twist on an old story!