Steel wrack is a species of seaweed that grows in the deepest trenches of the oceans and on the elemental plane of water. The plant is very easily recognized by its large bioluminescent flotational bulbs along its stem. Even though it is classified as a brown algea it has an ashy color with slightly transparent blades. When it dries the fibers of the plant become more opaque and acquire a shiny steellike appearance.

The plant has primarily been used by the Tiomeran people but they have not been able to farm the seaweed and cultivate it effectively. Thus, the Tiomerans will often gather it from the ocean floor or in the elemental plane of water using Depth Bells, and leave enough of the organism so that it may continue to grow and yield another harvest at a later point in time. Sea Giants also make use of the seaweed for food, clothing and other items. It is thought that in contrast to humanoids, these giants are able to cultivate the seaweed and do so to make their homes more hospitable. This would mean that sea giants could be responsible for new seaweed forests that have been discovered in various places.

The central stem of Steel Wrack is where it derives its name from. Steel Wrack can grow to immense heights and because of that, the stem is incredibly tough, yet still flexible. This makes harvesting the seaweed quite an ordeal, but the material is definitely worth the time and effort required to gather it. After processing the stem, it can be used to make remarkably strong ropes and nets. Once the stem has dried for some time, it can also be split into even smaller fibers which can then be spun and used in the construction of clothing and cloth armor. Items made from steel wrack stem are best maintained if they are rehydrated occasionally by soaking them in (salt) water for a short period of time.

As with other seaweeds, some parts of steel wrack can be consumed by humanoids. The leafy parts of this organism offer great nutritional value and are also used in alchemy and the preparation of medicine. Steel Wrack is not eaten because of how it tastes, but because of the energy and sustenance it offers. The taste of the blades is salty and bitter, and altogether not very pleasant. Spices and rice is often added to make it more palatable. The blades are also made into a soup that is consumed by Tiomeran depth bell divers to combat Diver's Dread and is also used ceremonially by these divers through the practice of wrack reading.

Steel Wrack stays upright in the ocean by flotational bulbs along its stem. These bulbs are filled with a viscous liquid and glow with a silvery light. This liquid glows softly by itself but can be also be ignited to burn far brighter. Steel wrack oil burns slowly and far longer than any regular oil but since it burns at a lower temperature and it is not used for cooking usually. In Tiomera this liquid is used to light up the six lighthouses at night and as a reagent in the Surge Foundries. 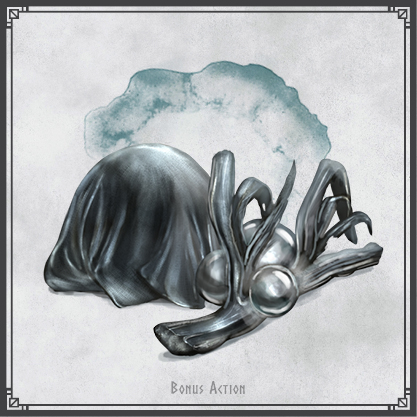 Really nice and very well complementary and supportive art to a good article. I had a bit of trouble imagining the plant, partly because I wasn't familiar with some of the terms, but it worked out perfectly this way. Thank you ^^.