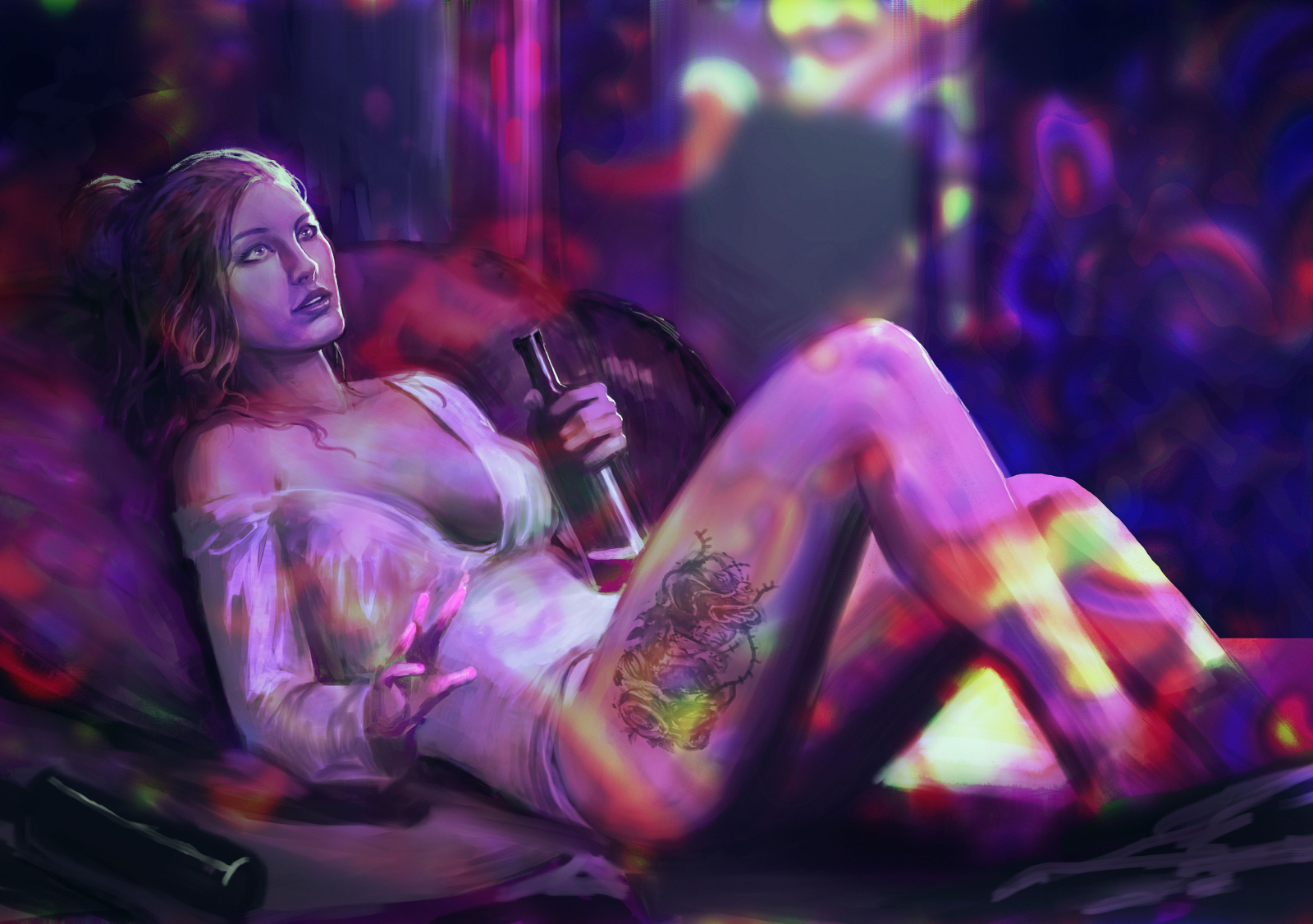 There's a lot of ways to escape the nightmares of Tairos that's for sure. Some turn to drugs, sex, alcohol... even just tapping out and ending it all. I've even heard of spell slingers who's minds are lost in maze of their own creation while their bodies just wither away.
— Bar talk overheard in Far Harbor


Phantasmal Craving is a condition associated with spellcasters target themselves with their own mind-altering enchantments to escape from reality. This is not a common addiction by any means but it is an insidious one that few magicians manage to escape. The emotions and imagery that can be conjured from such spells is intense beyond comparison and available on demand. Those caught in the raptures of Phantasmal Craving often lose touch with reality to the point where they can muster no more effort in their waking moments then it takes to renew a spell or beg for the Manacite needed to fuel this addiction.

The withdrawal experienced those unable to renew their haze is particularly frightening and dangerous to both the addict and those around them. Their minds will conjure images of terrible nightmares or abstract vistas that shatter their perception of reality. They will see, hear, and feel things that are not truly there. These phantoms are completely real to them as is the pain they experience during these difficult times. Their minds will short-circuit and dredge up agonizing injuries long past or completely imagined that wrack their bodies to the point of complete incapacitation.

The danger for others comes into play when the caster uses their spells against the phantoms they're seeing. Fireballs, Lightening Bolts and any other type of destructive incantation are all fair game when doing battle with the false foes they're confronted with and these attacks might very likely be directed at innocent bystanders by accident. Perhaps even more troubling is that some casters who are suffering from the deepest levels of withdrawal might attempt to work spells without having theManacite needed to fuel them. The Queen's Rebuke will ravage the body of such casters and those killed by the effects are likely to take out anyone unfortunate enough to be nearby.

When not under the effects of their own spells those suffering from Phantom Craving will often seem disconnected, distracted, and may even react to imagery conjured by their own mind as they inch closer to full withdrawal. The emotional state of addicts even outside of withdrawal will swing between extremes and those swings can be triggered by even the smallest triggers.

Non-magical treatment is often difficult as the ailments caused by this addiction reside in the psyche rather than the body. Treatments for withdrawal symptoms is often the best course of action. Pain killers and anti-anxiety drugs are generally essential to those trying to recover (and often a secondary addiction many with this condition suffer from). Restorative magic such as Restoration Spells offer some relief though the addiction is a learned behavior rather than a magical effect to removed. Spells that alter or erase memory can be of considerable help though. Often, the only long-form treatment that has proven successful is meditation, mindfulness, and embracing reality over illusion.

Those unable to seek treatment for their addiction often suffer from memory loss, confusion, altered recollection, and a rapidly decaying ability to interact with the real world. Long term, those suffering from Phantasmal Craving will eventually perish as they spend more and more time locked within their fantasies. Or, more commonly, they will suffer a catastrophic backlash of negative energy from attempting to cast without Manacite; killing themselves and anyone nearby.

Arcane spell casters of any kind. (Though certainly possible for a Divine Caster or Nature Caster to become a victim of Phantasmal Craving there is no known documented case of it. Likely because the higher powers which fuel their magic would prevent their gifts from being used in such a manner.

There is no preventive measure that can be taken to safely cast mind-altering spells on one's self. Spells that conjure illusions or emotions are much much more vivid and powerful when the caster targets themselves. Such spells will be evoking deeply specific feelings that match with the casters ideal versions of those things, there is tether of disbelief for them to hold on to; one's own mind is perfect at tricking itself.

Though unheard of in modern Tairos this condition was more widespread (though still very rare) during the time of the College of Magic. Those afflicted were often cast out of their circles or excoriated of their ability to cast magic at all.
Type
Magical
Origin
Magical
Cycle
Chronic, Acquired
Rarity
Extremely Rare
Magic

Please by all means. And thanks for reading it! Glad you enjoyed!

Love this articles, makes so much sense for any setting with illusionists and enchanters. Would love to use this as inspiration for my own setting.

By all means! Glad it inspired you Saafris! I have an article about a character suffering from this if youre looking for more. Name is Bess Lock

Uhhh, if you have a character that is suffering from the condition, I think it'd be great if you add her article on this article (for example, in the sidebar). You could do this by adding an articleblock.

Good suggestion. I made this article first and forgot to backtrack to add that. Just made a section called Known Affected Individuals and listed her there.