All who hear the Vákniþir's echo from my throne here in Helgarðr have knelt in submission. The thunderous roar of this great artefact has determined the shape of this realm.
— King Hálfdan Ubbasen

The Vákniþir is a large horn made of sheet gold. Its origins are unclear, but according to the legend of Hálfdan's Voyage, the horn possessed great destructive powers and contained clues to a mysterious prophecy. It was lost when King Hálfdan Ubbasen sailed east and ended up at the bottom of the Kirreic ocean along with his horn.   Hailed as a symbol of power and legitimacy by the Vakner of Henvikendal, the great horn is bound to crown whoever could find it as the next monarch of the Kingdom of the Henvikish.

The golden horn is made from two layers. The bulk of it consists of a smooth horn with ridges, but overlayed on top of that is the collection of artistic depictions that portray different events. Most of the figures are depictions of humans, but some are more anthropomorphic or zoomorphic, and then there are hybrids that posses the head of an ox, rabbit or wolf, but the body of a man. 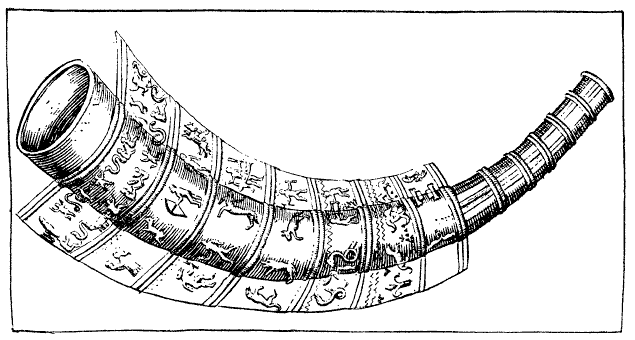 by Public domain
Some have suggested that the dividing ridges on the Vákniþir serve to group the artistic depictions into multiple separate chapters. The first chapter would then depict the horn-wielder's rise to power, and the second would show the unification of the Henvikish.   King Hálfdan predicted that the last one foretold his ascent into godhood, but he failed in his guest and perished in the process.

Walls have shattered, the hull's of ships tore asunder, and whole armies have scattered with the use of the Vákniþir. The tales tell of how the great wave of force generated by blowing on it may be used to win wars and crush all opposition. In addition to the offensive aspects, the horn, when blown slightly softer, may be used for less destructive purposes.   The wielder of the horn could send a loud message to a whole region, allowing them to warn of invasion or the ability to send out orders.
Length
75 cm
Item type
Communication
Related ethnicities
Weight
3.2 kg
Related Myths

Hálfdan's Voyage is the legend of King Hálfdan of the Henvikish, a man whose hubris led his downfall and the loss of a mysterious artefact

Answering: "Describe a valuable historical or ancient artefact in your world."
Visit Dhelian's Competition Page Check all other answers to this prompt Competition Homepage

I think the last paragraph under appearance needs some editing, but other than that another very good idea :)

Seems like an artifact that could do a great deal of damage in the wrong hands! :)