Lapis of Nicodem    Jilvayna Info      Skyshroud
The skyshroud strikes fear in the coarse and corrupted peoples of Theyndora. All others see a bloated tech ship barely able to float.
~~Leadcommander Enkordis to High Counselor Wislen 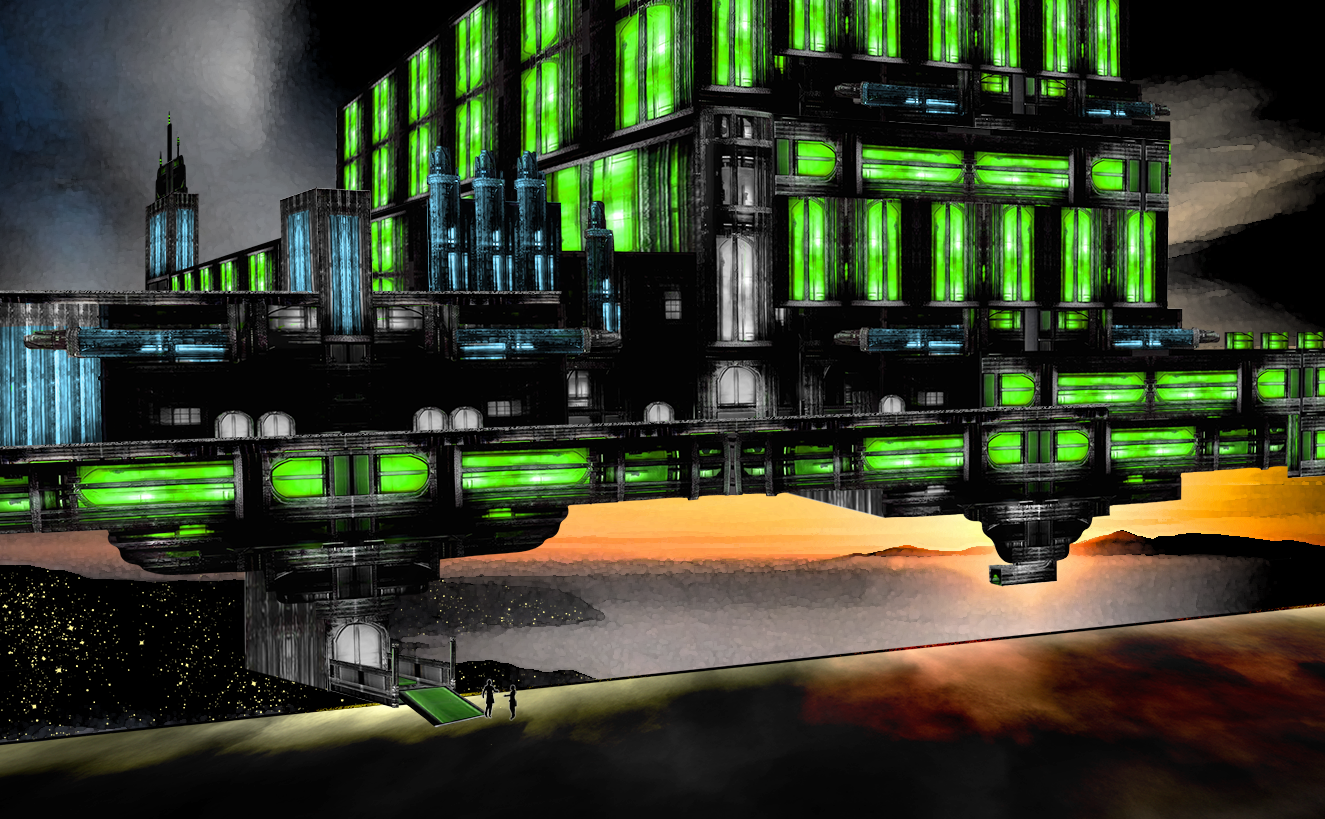 view of outer deck, mid and aft of Compartment 3 (Anchor)

All images by Shanda Nelson unless otherwise stated.


skyshroud: base image from Artbreeder
sunset: DeltaWorks at Pixabay
silhouettes: bedexstock at Pixabay 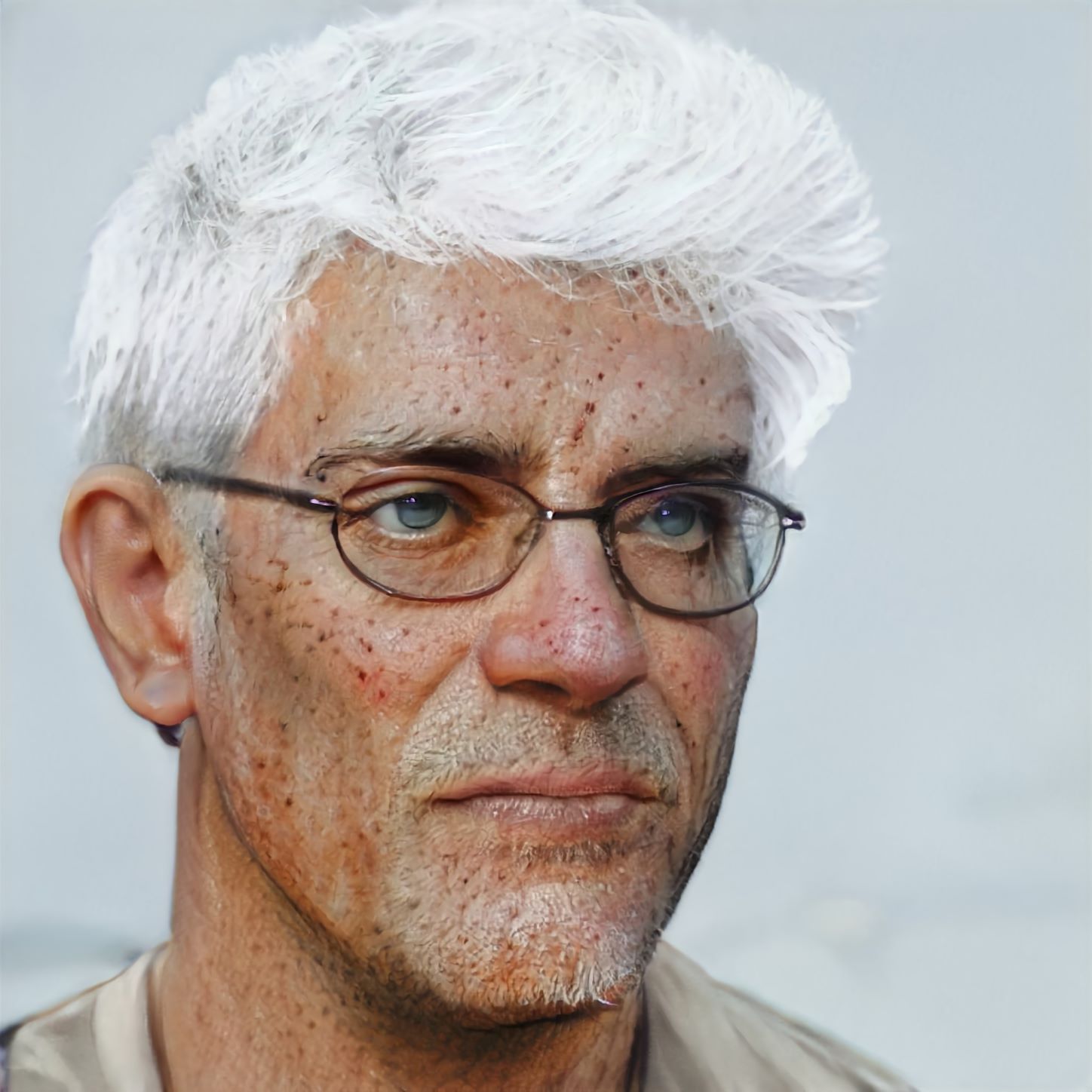 The Republic of Alleurs military engineer, Reuque Flaers, is credited with the first incarnation of the skyshroud. Flaers and his team, while researching energy sources for the single-man airships called Fast Wings, liquified the 'floating rock' metal ingessen and mixed it with a specialized solution of chemicals. They discovered that the by-product gas, under pressure, worked better than previously discovered floater gases in levitating heavy weights. Adding their newly-designed propulsion system to the ships made them fast enough a well-trained pilot could avoid artillery, if outfitted with the appropriate tech mod.
Flaers brought the ingessen gas to his other project, which he called the Floater, a not-so-inspiring name for a large transport airship. The bulky craft had numerous problems and broke apart unexpectedly, but Flaers sent the viable remains skyward during a military review. While square and with a non-existent hull, it wowed the generals with its floating ability and weight capacity, and they ordered one built to fly divisions over the Layeum Mountains. They needed a craft to transport troops and equipment to the front lines in the war against their northern neighbor, Meergevenis, without bothering with the treacherous mountain passes, and the Floater did what they wanted.   The airship made its way across the ocean and to the eastern continent of Pelthine by way of the country of Taangis, and a hundred years later, High Counselor Wislen of Dentheria purchased two from the Taangis tech company Morgaille. General Servele suggested renaming them skyshrouds, because they filled the sky and blotted out the sun for the unlucky people below.

Flaers was known as a harsh taskmaster with eyes as dead as the people he unintentionally killed during his research. Many underlings waited for the day when his disregard for human life ended his career, but that never happened. His brilliance in taking set-backs and turning them into shocking successes kept him in the good graces of the upper military ranks. He died an Alleurs hero while those who served under him cursed his name.


Dentheria purchased their first skyshrouds from Margaille without modifications, but subsequent councils have invested in redesigns that make them larger and more ominous than the originals.

Skyshrouds do crash. The port city of Asef in Andef was partly destroyed when one crashed into it, though Dentheria has never related why the disaster happened. The empire, due to the cost of clean-up, left it as was, not even retrieving the bodies of their soldiers. Families hired mercenaries and other such types to retrieve their loved ones; many of them went missing as well.   Modern Asef has ghost stories aplenty concerning the remains of the ship. 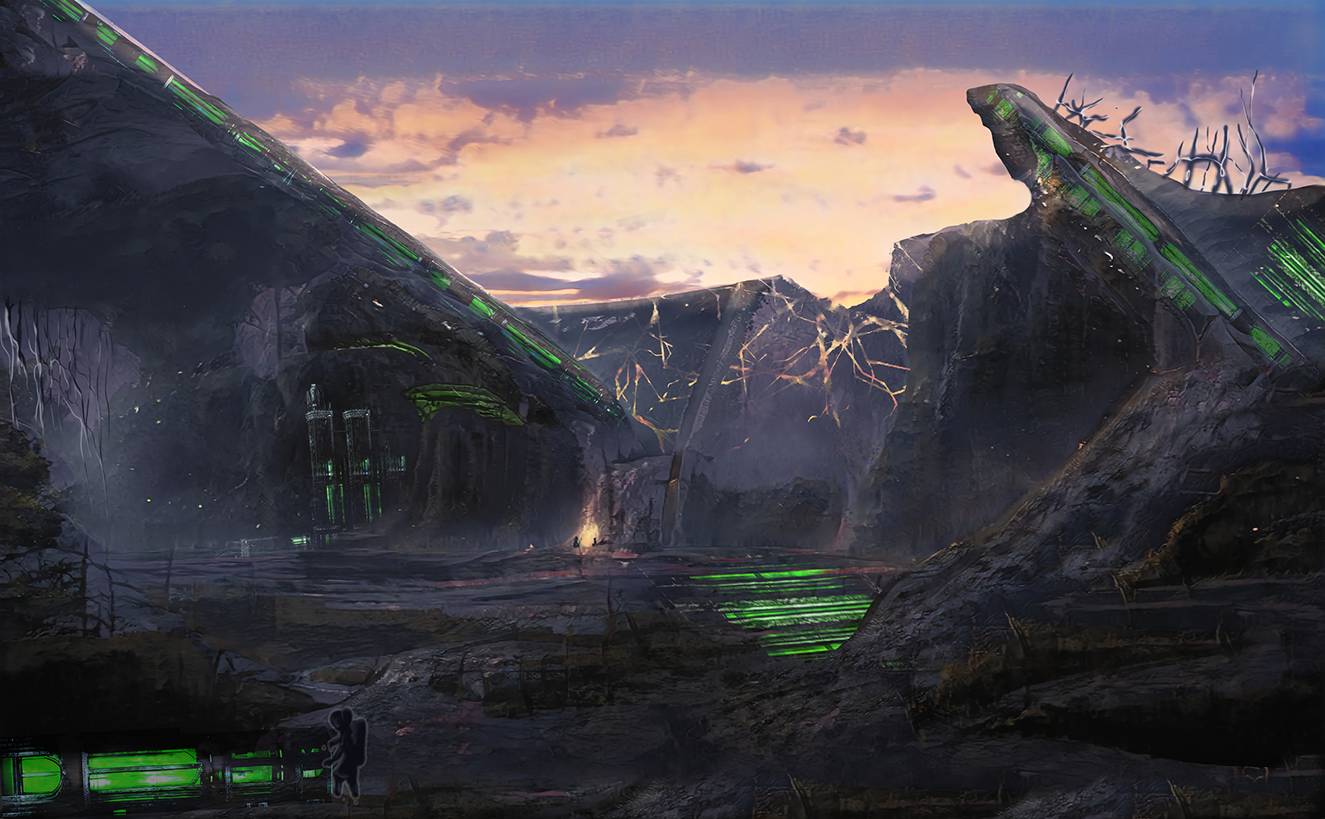 The Dentherion skyshroud is the size of a town. While its purpose is to carry troops across Theyndora, it is primarily used as a propaganda tool to strike fear in populations that might otherwise rebel against empire rule.   To this end, the skyshroud is made from jet-black metal, with neon green running lights that have an ominous look against the dark hull. Tech canons ring the gunwale and flash at random intervals, keeping populations on edge and expecting attack. Dentheria has added artillery not found in the original designs, such as deckguns, and while functional, they are mainly for show.
The 'shrouds dock at large towers called anchors, and hover over the surrounding city. Afraid of a crash, citizens directly below live in constant fear until the bulky ship slowly makes its way to its next destination.   The lack of speed is purposeful; Dentheria prefers the 'shrouds to amble through the skies as dark, menacing crafts that remind vassal state populations the empire is there to stay. However, when necessary, the 'shrouds can reach 200 knots. They accomplish this by triggering the cutter, a transparent windglass shield that opens like an umbrella and curves about the ship, then igniting jets fueled by the interaction of ground ingessen, aquatheerdaal, and a chemical solution. 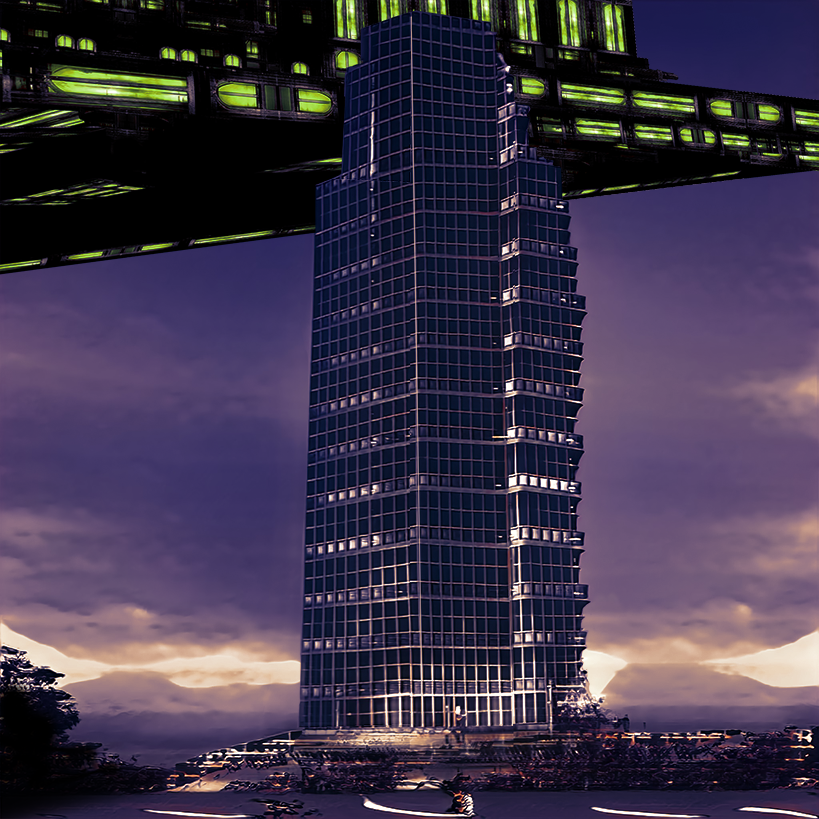 While the empire's military accepts soldiers from all empire countries, only native-born Dentherions are allowed to serve on a skyshroud. This does not apply to commoners, like engineers and housekeepers.
Vassal state residents refer to those serving aboard skyshrouds as Shroudies. It is a derogatory term none use in the presence of a Dentherion.
The empire normally has 2K soldiers on board, with another 1K designated as citizen contractors. These include housekeepers, engineers, merchants and the like.
The 'shrouds possess a lot of advanced military tech. If a compartment, or the entire skyshroud, crashes, scavengers tear through the mangled metal as quickly as possible, before a retrieval 'shroud is dispatched.


Skyshrouds are square and divided into four equal sections called compartments, each containing living quarters, work stations and offices, mess, and small shops that sell necessities to soldiers. These structures are built to the sides; the middle of the 'shrouds house Swifts and other fleet aircraft, plus hangars.   The Forebow houses the leadcommander and his advisors and assistants. Each compartment has a commander who sees to the daily operations of their section. Soldiers are assigned to a particular compartment based on an assessment of their abilities.
Each compartment has a dedicated ingessen pipe system that houses the gas. It is up to the commanders to maintain the integrity of the pipes, and many work with several engineers to ensure viability.   In the unlikely event a compartment fails, the leadcommander has the option to jettison that section. If more than one fails, the skyshroud breaks into four sections based on compartment and secondary, emergency floatation pipes and jets are employed. Each individual 'shroud attempts to return to the nearest dock on their own.

Where the Leadcommander stays when aboard ship. Houses meeting rooms, dignitary accommodations, and the like. It also sports stores that sell luxury items, a bathhouse and sauna, and a restaurant at the top with a splendid view of the landscape. This compartment is considered the most important.
Coms

Communications compartment. It also contains the air control tower. Many of the pilots have rooms there.
Anchor

The compartment above the anchor. Most reg soldiers are housed here.
Tail

The largest tech weapons are stored here. It houses the engineers and other support staff. If scientists are on board, they live here.   The Tail houses the hospital.
Hangars

Hangars house the smaller aircraft as well as vehicles for transport across the skyshroud. Each compartment has a flight commander who oversees the hangars and the people who work there.   The hangars also have training and exercise areas, scientific research stations, etc. 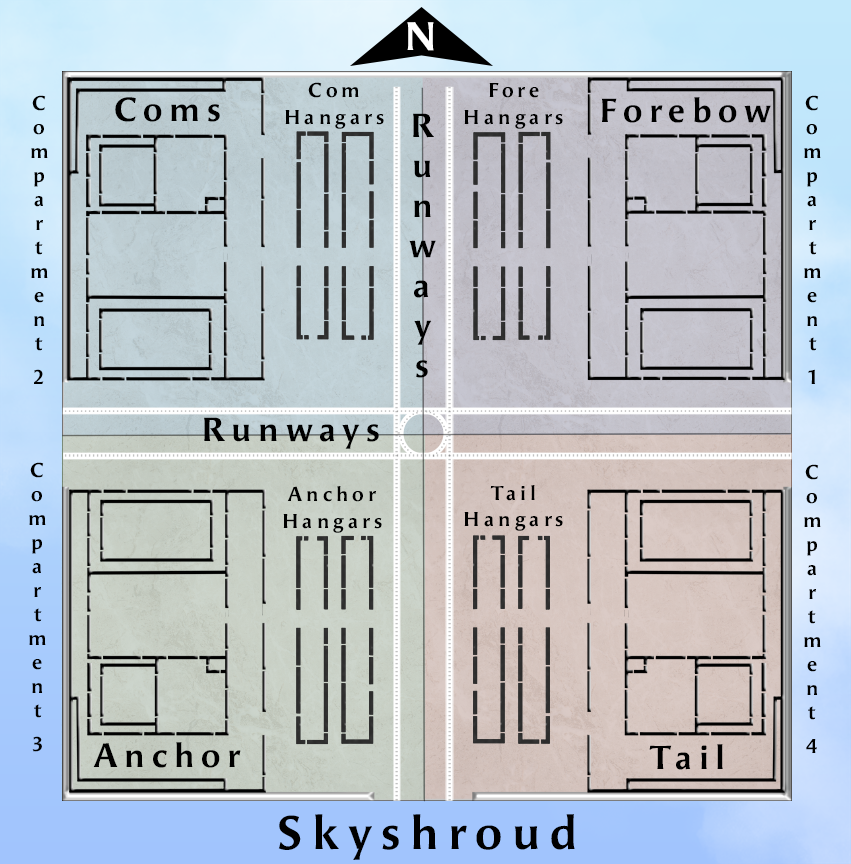 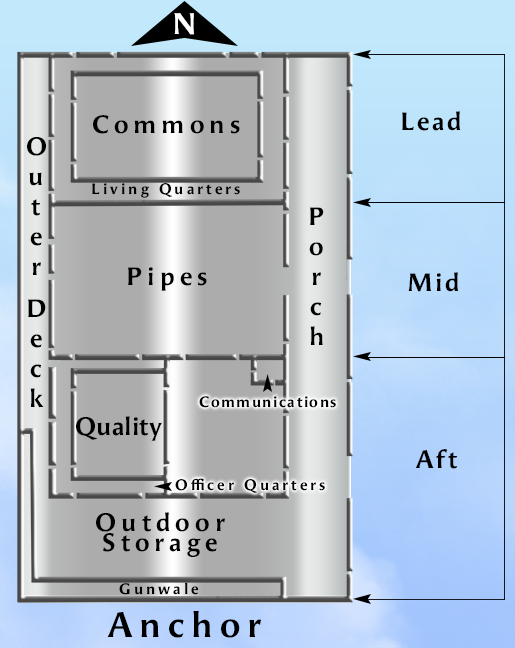 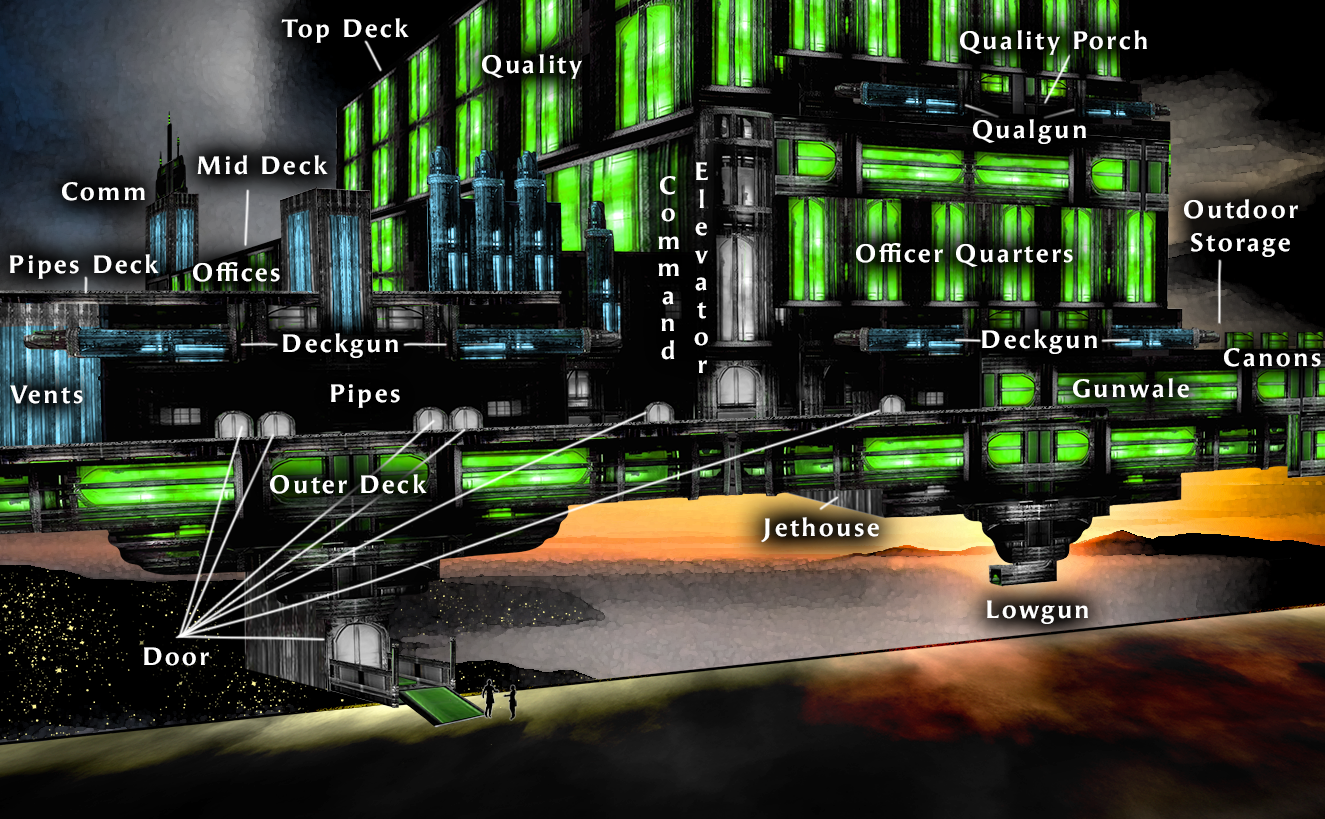 Jethouses extend below the ship, and are found at the corners of each compartment. Since skyshrouds do not turn, the jets themselves turn. They first point in the direction the skyshroud is going, slow it down to a hovering stop, then rotate to the appropriate direction and send the ship on its merry way. It takes several knots to reach full speed after a stop.   Unlike jets, cutters do not rotate. Each compartment has one below the runway, which is deployed in the appropriate direction. Smaller cutters are centered in each compartment in case of a ship break up, but they only extend from the aft. This causes problems if the ship is not already going in that direction.

Dentheria still gets the metal and glass to build the ship from Taangis. Margaille's ingredients and process are proprietary, though Dentheria would love to back engineer them. The sheets used to create the walls and hull are resistant to both tech weapons and physical assault.
All compartments have the same layout, though each has different purposes for specific structures.   When referring to places onboard the skyshroud, the name of the compartment is used, then the name of the specific structure: e.g., Anchor Commons.
Jilvayna Currency
Jilvayna Info
Tech

Very cool, (and as of at least the first 40 articles i have made it through unique) concept. it is obvious that you put a lot of thought into the design of the ships. only thing I would potentially change is the label of 'N' on your maps to Front, but it should also be fine to leave as is.