The people of the Zoen region of Jaumun have a different view on what constitutes as formality than the rest of the JauVon people. Though they still believe formality and tradition to be important.

Zoendol Formal Dialect, unlike informal, uses all parts a word is build from. But unlike Cuhcil Formal, they string them together into one long fluid word.
This is done for the appealing sound and is also used in their writing system as they tend to make bands (tattoo, jewelry, and paint) from words. They often decorate their bodies, objects, and buildings in such a way.

Tatoos are very important to the people of Zoen, so much so that they wear minimal to no clothing so they are not covered, choosing instead to wear a large amount of jewelry.   Every year on one's birthday they will receive a new tattoo. These are known as knowledge rings and the make one ones Life Spiral. They start on the back of the hands and spiral up the arms with each passing year. When you preform important actions those are either incorporated into your knowledge spiral of the year, or, if they are large enough feats, they will be placed else were on your body to let their importance stand out.   Your first successful hunting trip where you take the lead is more prominent ring in your spiral and marks you as an adult.

While there isn't much of a 'code' to dress, typically one wear's bodypaint and jewelry that enhance the tatoos they have. If a body is completely unadorned it is considered improper, so if you have yet to earn many tattoos, or have no jewelry, opting for paint is a good move. 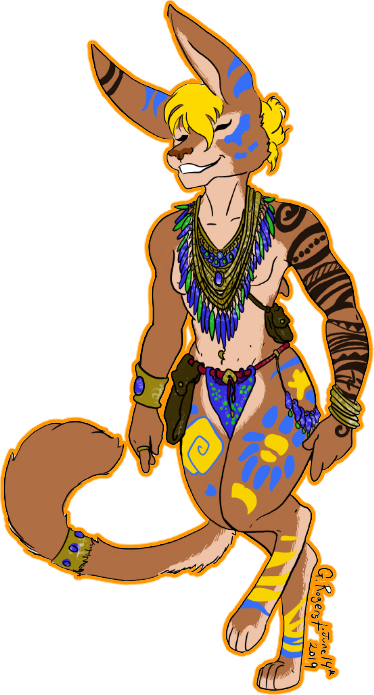 The Zoendol people find jewelry and weapons crafting are the highest forms of art, aside from body art. Usualy combining the two into beautiful and functional masterpieces.

As in Traditionalist culture, family names are given at birth and usually kept for one's whole life regardless of marital status. Your last name is determined by the parent you resemble the most. If you look like both then your parents decide which to give you, give you both, or create a new one for you.