This is a collection of tools I have found and collected to help writers, worldbuilders and storytellers to create stories. The tools themselves are not something I have created, all credits go to those who have. I am just someone who is gathering them in one place to share them to you. To help you as they are helping me.

The Story Circle, by Dan Harmon, is a storytelling framework to help writers outline their stories. View the full article by clicking/tapping the block below or click/tap here. 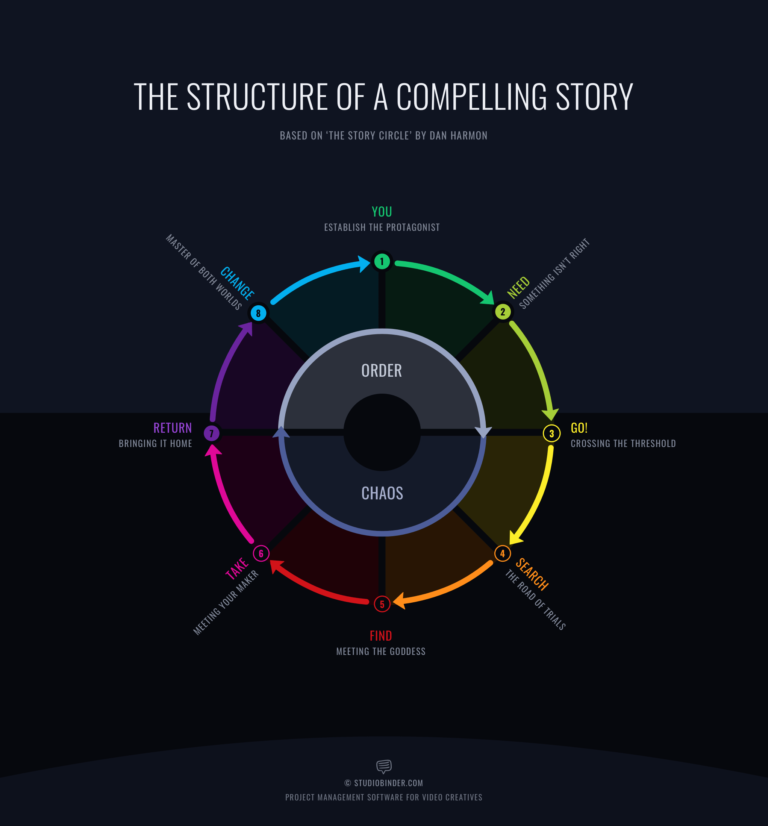 Definition The protagonist sets out to defeat an antagonistic force (often evil) which threatens the protagonist and/or protagonist's homeland.
Examples Perseus, Theseus, Beowulf, Dracula, The War of the Worlds, Nicholas Nickleby, The Guns of Navarone, Seven Samurai (and its Western remake The Magnificent Seven), James Bond, Star Wars.

Definition The poor protagonist acquires power, wealth, and/or a mate, loses it all and gains it back, growing as a person as a result.
Examples Cinderella, Aladdin, Jane Eyre, A Little Princess, Great Expectations, David Copperfield, The Prince and the Pauper, Brewster's Millions.

Definition The protagonist and companions set out to acquire an important object or to get to a location. They face temptations and other obstacles along the way.
Examples The Odyssey, The Pilgrim's Progress, The Lord Of The Rings, King Solomon's Mines, Six of Crows, Watership Down, Lightning Thief, Raiders of the Lost Ark, Monty Python and the Holy Grail.

Definition The protagonist goes to a strange land and, after overcoming the threats it poses or learning important lessons unique to that location, they return with experience.
Examples Ramayana, Alice in Wonderland, Goldilocks and the Three Bears, Orpheus, The Time Machine, Peter Rabbit, The Hobbit, The SpongeBob SquarePants Movie, Brideshead Revisited, The Rime of the Ancient Mariner, Gone with the Wind, The Third Man, The Lion King, Back to the Future.

Definition Light and humorous character with a happy or cheerful ending; a dramatic work in which the central motif is the triumph over adverse circumstance, resulting in a successful or happy conclusion. Booker stresses that comedy is more than humor. It refers to a pattern where the conflict becomes more and more confusing, but is at last made plain in a single clarifying event. The majority of romance films fall into this category.
Examples A Midsummer Night's Dream, Much Ado About Nothing, Twelfth Night, Bridget Jones's Diary, Music and Lyrics, Sliding Doors, Four Weddings and a Funeral, The Big Lebowski.

Definition The protagonist is a hero with a major character flaw or great mistake which is ultimately their undoing. Their unfortunate end evokes pity at their folly and the fall of a fundamentally good character.
Examples Macbeth, The Picture of Dorian Gray, Carmen, Bonnie and Clyde, Jules et Jim, Anna Karenina, Madame Bovary, John Dillinger, Romeo and Juliet, Julius Caesar, Citizen Kane.

Definition An event forces the main character to change their ways and often become a better individual.
Examples Pride and Prejudice, The Frog Prince, Beauty and the Beast, The Snow Queen, A Christmas Carol, The Secret Garden, Peer Gynt, Groundhog Day.

Description: A method of creating novels based on the concept of a Fractal Snowflake.
"Good fiction doesn’t just happen, it is designed."
Snowflake Method

Someone wants something badly, by a specific time, but is having difficulty getting it by a specific force, because X is stopping them.

Where does the story take place?

Who is the villain? Bad person? The one who challenges the Protagonist(s)

Who is the main character(s), the Protagonist(s)?

How does the story end? What is the Final Showdown? The big main event which the story leads to?

Where does the story begin? Also when does the book begin in the story?

If you have any tools of yourself you'd like to share and add to this toolbox, then comment below and suggest it to me.
The goal of this toolbox is to help each other and inspire each other.
Writing Toolbox

All artwork and content is ©2020 Heffé. All Rights Reserved.

I love this, thank you.

You're welcome and thank you! I'm super happy you like it :)

Couple more tools for you: Save the Cat: https://savethecat.com/get-started (Screenwriting method for getting the beats down--there are loads of beat sheets you can Google but this is the guy who started the method.), The Snowflake Method: https://www.advancedfictionwriting.com/articles/snowflake-method/ (A way to outline that starts as a snowflake and then adds on to itself until it snowballs into the novel), Tami Cowden's hero, heroine, and villain archetypes: http://www.tamicowden.com/archetypes.htm :)

Oh interesting! Thank you very much, I'll definitely look into these!

Thank you for putting together this ressource!! Saved it for future reference :)

I wrote something for the Alliance Challenge, it would mean the world to me if you checked it out!

Great ressource! Thank you for gathering all this, in such a concise way. I didn't know about the snowflake method, I'm glad I learned about it! :)

With love,   Pouaseuille.   Feel free to check my entry for the Alliance Challenge! Or don't, if you don't feel like it.
Powered by World Anvil