Fillimet    Everyday Life    Professions      Ghost Hunter
"So this is where you've been hiding," Sarn surveyed the closet-sized office. The desk and both chairs were occupied by a large assortment of necromantic relics, while a heavily locked box labeled "Soul Prison" occupied the far corner. A bookshelf claimed most of the left wall, stuffed with molding genealogical records and dusty texts of local history, the paper yellowed with age. "Never figured you for a desk job."   "Not many grow old in our profession," Tara shrugged. "I wanted the chance to try."   Sarn snorted. "You're going soft. You used to be fearless."   "Still am." Tara gave him a stern look, her golden eyes still sparkling in the dim light of the office, before twisting her lips in amusement. "Been looking for an assistant. Could put your name in."   "You know that's not my style." Sarn picked up one of the reagents from the well stocked alchemical cabinet by the door, absent mindedly studying the viscous oil within. He glanced at the label. Fireflower. The cabinet was impeccably organized, a beacon of order in the otherwise haphazardly cluttered room. "I won't be your housekeeper."   "Suit yourself," Tara folded her arms across her chest. "But I still need you for this job."   "Going soft," Sarn teased. He had missed working with Tara. Tough as nails and as sharp as they came, the jobs where they teamed together had always been some of the best. When she got this job on retainer he'd been happy for her, but there was no way he was going to let her know that. He'd lost his favorite partner that day. "The Tara I knew never needed help. What ghost scared you enough to come running to me?"   "It's not fear." Tara's voice remained level, her stance unaltered. "This job's... different. I get the impression her violence was only for attention. She scared a lot of people, yeah. But she was careful not to hurt anyone, and she stopped as soon as I opened a dialog. That's not lost soul behavior."   Sarn's brow wrinkled. "Then why do you need my help? Seems a simple job to me. Grief Walker could probably take it from here, even." He gently returned the fireflower oil to the cabinet before retrieving a new vial, this one containing crushed greenleaf according to its label. He spun it in his hands, watching the dried leaves adjust and resettle.   "I offered. She refused. It's just... I'm not afraid of her, but maybe you should be." Tara's voice betrayed concern. "She asked for you specifically. Says you two have business to settle..." She leaned back, resting her weight on the edge of the desk. "Does the name 'Narik Tolliver' mean anything to you?"   Sarn felt the blood drain from his face, the alchemical vial slipping from his hands. He heard the glass shatter, shards and dried leaves scattering from the impact. Tara's concern echoed in his ears, a lifetime away.   He had never forgotten Narik, his first real job at a ghost hunter, and how terribly he had botched it. He had hoped to forget, but somehow he'd always known this day would come for him. Someday he knew he would have to pay for the sins of his arrogance, all those decades ago.   Today was not going to be a good day.
Ghost hunters remain the last line of defense for the removal of ghosts, vengeful spirits, and other lost souls. They strive to encourage the departed to move on to their afterlife beyond the Veil, beginning with stronger variations of the skills used by Grief Walkers. In cases where the spirits will not leave willingly, or if a deceased individual is deemed too dangerous to allow through the Veil, hunters are forced to enact more extreme measures to trap the soul and defend the mortal planes.

Some ghost hunters receive expert training in schools of Necromancy, others hunter-specific training in schools which may or may not provide legitimate training, but most begin as self-taught novices. The best training a hunter can receive comes from other hunters, especially experts with a large amount of experience in the field.   Regardless of the source of the knowledge, the most important skill a ghost hunter needs to master is an ability to learn and problem solve quickly, and frequently under pressure. A great many things can only be learned through practical applications, and no two hunts are ever identical. A successful hunter must therefore also be an expert at improvisation if they hope for sustained success and survival in their field.

Ghost hunting is grueling, dangerous work, and therefore expensive to hire. Most hunters work as mercenaries, typically in small close-knit teams of two to five people, traveling the world to work their trade. Expert hunters are expensive but highly effective.   Novice teams of hunters are a more common sight. Their services are cheaper but also less guaranteed to succeed. Most run solo, banding together as needed in fluid alliances of convenience, although some find trusted teams of their own. All experts began as novices, working to build a name and reputation for themselves in the hope of catching the attention of an expert team, but most novices don't live long enough to become expert hunters.

Governments and other professional organizations have been known to hire ghost hunters to help maintain the peace within their jurisdiction. While smaller municipalities may simply hold a contract for periodic services from a hunter union, those who can afford it will hire their own dedicated team of ghost hunters. These comfortable positions are highly coveted in despite the lower psy as they are fully salaried even when not on active duty, the jobs are typically easier than freelance fieldwork, and if difficult cases arise they have the authority to hire a freelance team for assistance. They are also the only hunter positions with a chance of providing a retirement package. Freelance hunters tend to look down on these retained hunters as cowardly or lazy, even as many strive to obtain a similar position.   On the far extreme of employment are the ghost executioners. These are also government positions, but very few covet the role. These positions also offer retirement packages for those who are able to complete the terms of their contract. Most do not, instead becoming twisted by their own soul trapped victims until some day performing their own atrocities to join them.

Aside from the ghost hunters employed in government positions, most ghost hunters do not maintain an office or fixed work location. To work as a ghost hunter is to live a life on the road. The best prepared teams do maintain a mobile office in the form of a well equipped vehicle or a fully stocked bottomless suitcase. Those with a long history in the business have also amassed a collection of contacts consisting of useful resources, fellow ghost hunters, and friendly former clients, who can be called upon as needed.

While most deceased pass on to their new life beyond the Veil with little trouble, and many of the remainder can be helped by Grief Walkers, some dead individuals remain bound to their old lives in some way. Over time even peaceful spirits can become violent, either due to frustration that the issue holding them back has not yet been resolved or due to the gradual loss of self that occurs as they continue to deny themselves the opportunity to pass beyond.   This is where the ghost hunters are called.

Experts in Necromancy, ghost hunters utilize their skills to first communicate with the dead in an effort to learn their needs or weaknesses, before developing a plan of action specifically tailored to each individual spirit.   In the best circumstances a hunter will convince the spirit to move on into the next phase of their afterlife. Sometimes this is simply a matter of listening to the lost soul, and performing duties that should have been fulfilled by a Grief Walker upon their death. Other times Necromantic Soul Magic is needed to sooth the departed's strongest emotions and worse inclinations. Sometimes a trap must be set to confront the individual with some sort of repercussion of their own actions and vengeance.   But sometimes none of these actions are enough. In cases of particularly stubborn and vengeful spirits they may be forced to perform an execution instead. 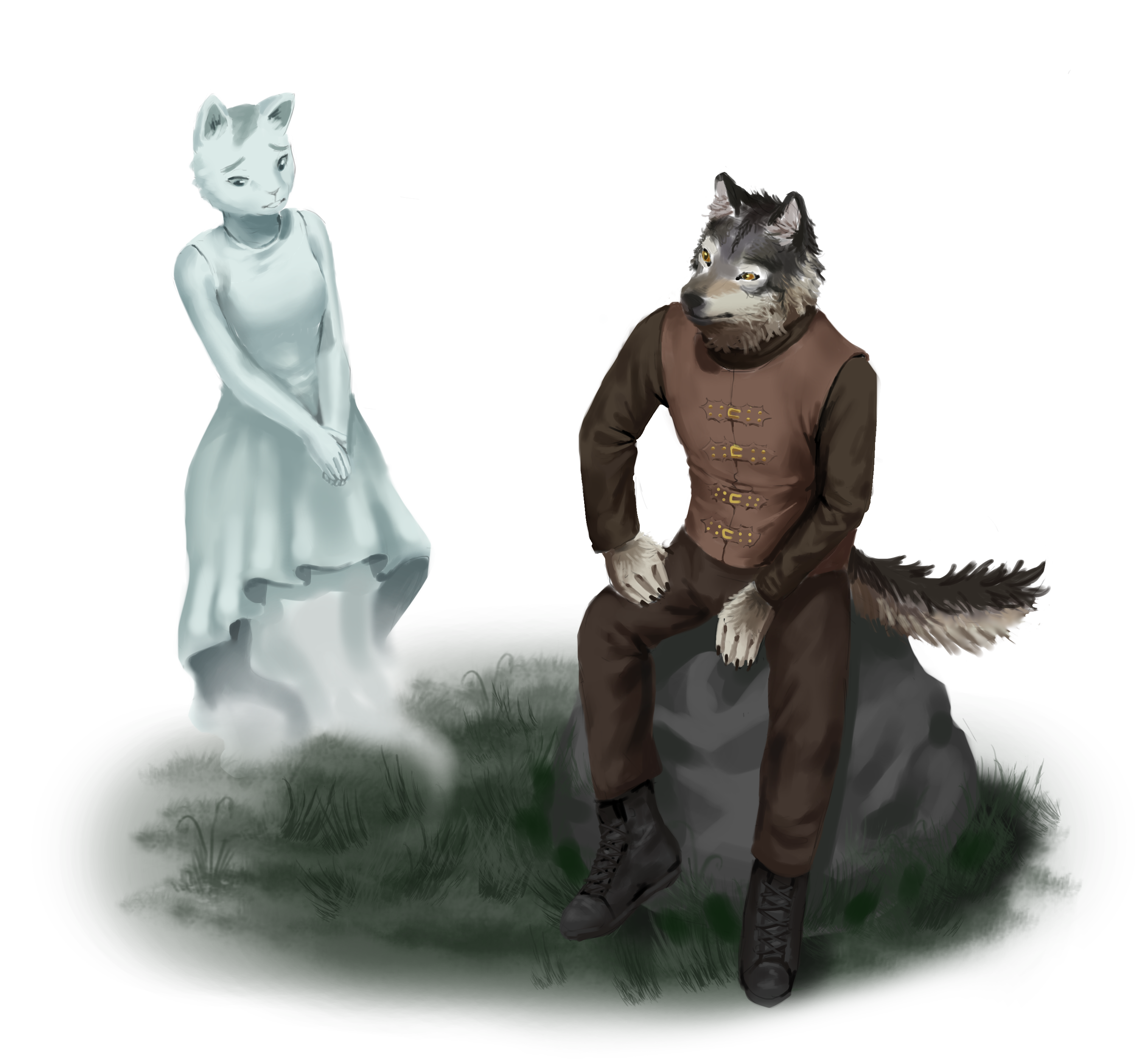 Necromancy is the magic of the soul and the Veil, allowing direct contact with the souls of others. The practice is widely respected and encouraged as a therapy, particularly those suffering grief due to a recent death, possibly their own.

Grief Walker are Necromantic Therapists tasked with counseling the dead and dying in accepting and embracing life beyond the Veil, assisting their loved ones in coping with their grief, and helping everyone involved to find the closure they need.

Once considered a physical barrier to the afterlife, the Veil is the vibrational frequency at which most people can no longer observe the spiritual vibration of an individual or object.

The soul is the essence of an individual, the spiritual core of who they are and why. If that soul is damaged so is the person's identity, and their opportunities for an afterlife. This is the fractured eternity of the Soulsundered.

Your prose here is haunting and beautiful. It took my breath away. Well done.

Thank you so much! I have been trying to write more stories into my articles, and am particularly proud of this one. So glad to hear you enjoyed it!

The prose is beautiful and sad. ;_; I feel sorry for everyone.   Ghost hunter sounds like a really interesting profession.

Definitely story potential with ghost hunters. This story did turn out a lot more heart wrenching than I had originally intended.   I am going to have to make them their own alchemy tricks and such, too, for use later.

God the prose.... I really do love it when you add these bits to your articles, and this one here is particularly haunting (padum tsch). But seriously, amazing article!

If you like the Prose then you are in luck, as one of my writing goals for the year is to write more of them. So glad to hear you enjoy!