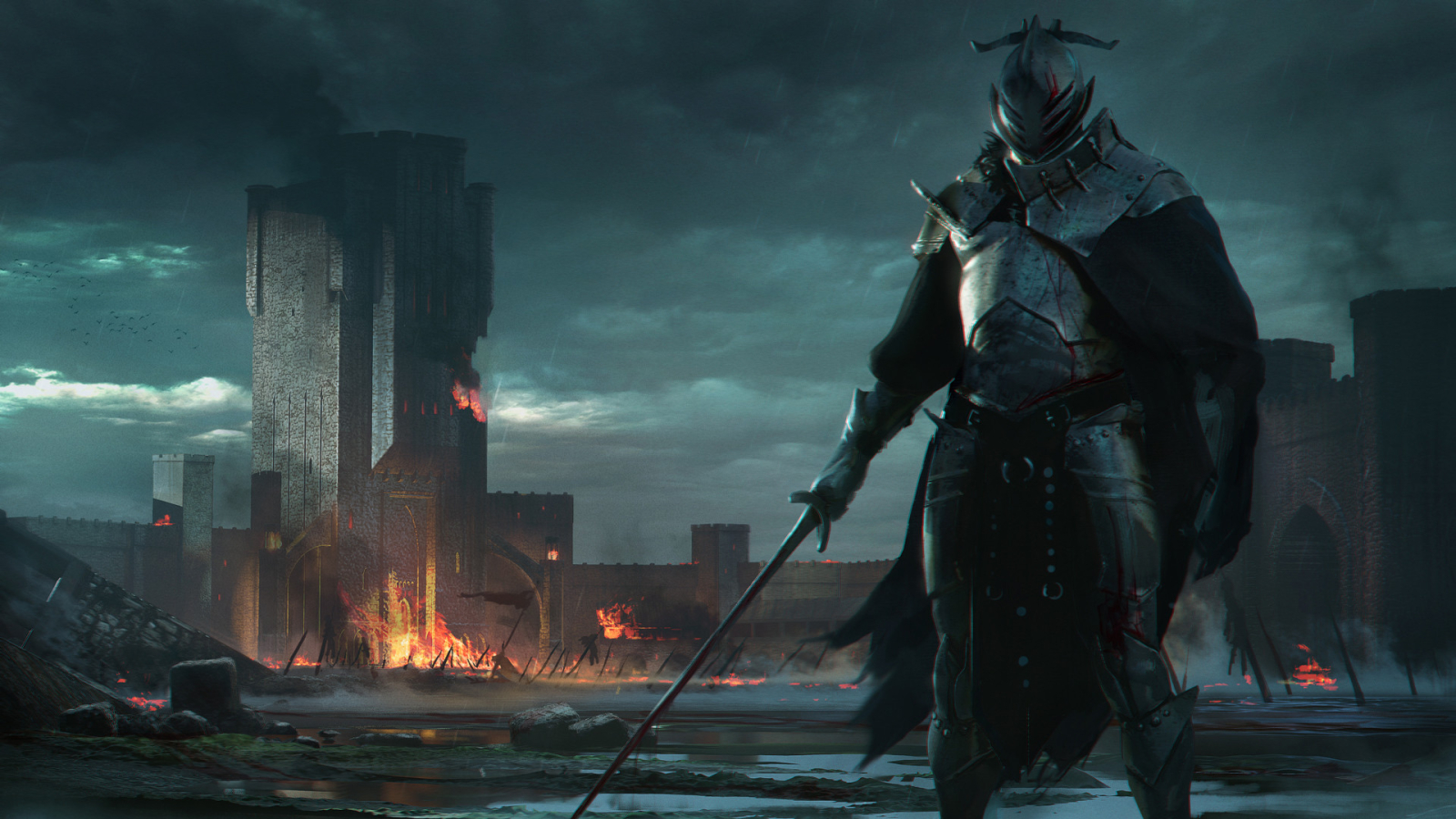 Making dragons out of windmills

The term Freehold Knight refers to any individual who lives within The Freeholds and have an abundance of power and influence within their respective freehold. They are usually divided into elite orders, each freehold having their own organization and each knight having their own unique style and skill set that stands apart from the rest. While many do practice The Arcane, most don't practice magic at all, but their abilities as well as the equipment that they possess often can be confused for it.
The Knights of the Freeholds are known for their outfitting. These ancient artifacts have seen many wars as they were passed down from generation to generation. The knights travel, standing taller than any man, modifying and upgrading their gear steadily through the ages. The knights are a strange breed, as they are remarkably idealistic. They are romantics to a fault and with each passing year, they descend further into their delusions.

The knights are those who inherited power in the freeholds in one form or another. Some are monarchs of their city state, some come from families who were given their land and titles by another, others still are hedge knights, stripped willingly of land and title who live in the Phobic lands of the freeholds.
The freeholds have always been in a constant ebb and flow between war and uneasy peace. This has led to an ongoing arms race despite the fact that arms dealing is illegal. The knights constantly barter and trade with foreign nations and each other hoping to get an upper hand. They each have a vision and that vision changes routinely. Each trade brings them closer to realizing their true potential. Each new item is believed to be the edge they need, and if it isn't, they merely trade it off for the next bauble that feeds their delusions.

The Knights are known for being larger than life. This comes from their armor which served as the inspiration of the armor worn by The Judges of Law and Merit. A freehold knight requires at least 30 minutes in order to put on the armor. While most armor is attached, the freehold knights are encased in their armor, needing to step inside. The armor is said to have an aura that infects the minds of those within.

The knights may have lost their grasp on reality but they are still formidable opponents. They are skilled in strategy and each could know a myriad of skills in combat. They are intelligent, well read, and well cultured, such is a gift of nobility. Most are well loved by the people they claim to protect, even if there is little to protect them from. Their armor stands at 10-25 feet tall and the runes inscribed in the armor along with the equipment and weapons gained during the age of arms, all ensure an intimidating presence wherever they go. Outside of the armor, they can be just as dangerous, as their wits are often as sharp as their blades. 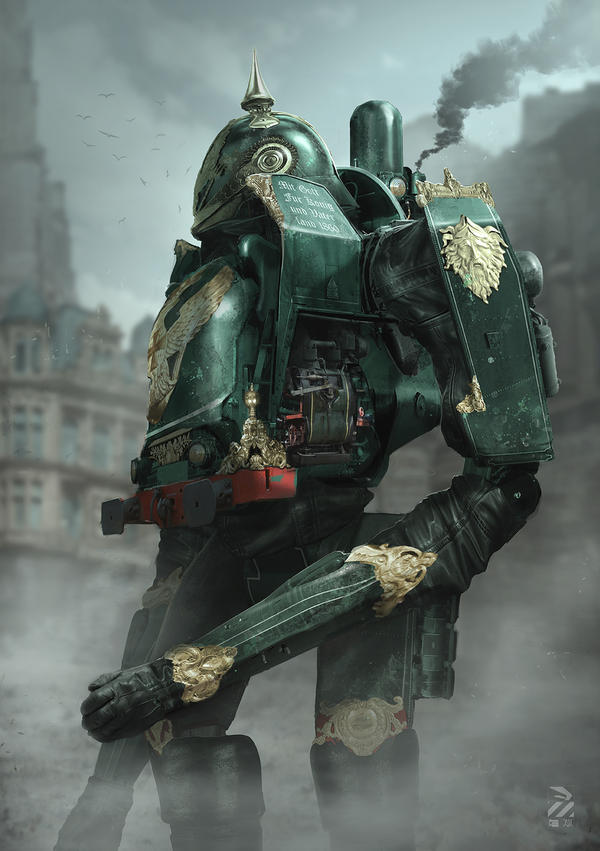 Many of the freehold knights have played with fire for far too long. They suffer hallucinations of strange glittering eyes among the stars in the sky. They have delusions of honor, nobility, and chivalry, obsessed with their ideals to the point of doing more harm than good. Most have generally optimistic personalities and always seem to find the bright side of the darkest situations. While this in itself isn't detrimental, when combined with their mental state and their delusions it has serious consequences as their unique equipment has been lost to the ages on more than one occasion due to their idealistic thinking. While it is unclear why this happens the many Lartasian enchantments are often blamed for their mental state.

The Lover's Wail is a beautiful combination of magic and technology from the strange lands of Lartasia. The story of its creation is a romantic tale of the freehold knights of Espada who ventured to Lartasia along The Powder Roads. He stumbled upon a beautiful landscape infected by Universal Mania. At its edge, a playful woman with the lower body of a spider began to converse with him. The Tablin saw the knight as her next meal, enticing him with her human form in hopes of getting a rise from the lusty liver she believed all men share. She was delightfully disappointed however, as the man simply turned from her with the look of sadness on his face. She tilted her head in confusion and asked,
"What is wrong? Does my body not please you?" He shrugged as he took a knee by the pond without caution or care.
"Once in a time before, fair lady, but my heart belongs to another."
"I speak not of love, join me in this warm water, let her keep your heart, the heart is not nearly as entertaining." She said as she reached from the pool to wrap her arms around him.
" I am sworn to be chaste, my lady. He has my heart, and is sadly no longer with us. The pleasures of your company would be wasted on me, if indeed pleasures are what you offer." She backed away calmly but with great caution.
"A hunter then? He comes to the pool of the spider wife to bring back her head?" She growled with malice in her eyes. The man laughed and shook his head, raising his hands to protest.
"I've only come for a drink. I value life in all its forms. I will not raise a hand against you, so long as you grant me the same courtesy." He calmly reached his hand to collect a handful of the water and she grabbed his hand and pushed him back, revealing her arachnid form.
"This is not water for drinking." She said scooping a handful of water up and revealing the viscous quality it possessed. "This is the water of Mania. Toxic to those not accustomed to it."
He sat back and smiled, "The predatory temptress spares a life?"
"The life of a rare breed of man, yes. Did this one belong to him?" She teased, holding up a silver ring as she backed into the water. He rose with a quickness, reaching for his sword. She held up one hand to stop him while she held the ring by her fingertips in the other. She carefully dipped the ring into the pool, and the water formed a barrier within its closed loop. She began to ascend from the water, her eight legs reaching far to match the knights unnatural height. She removed the helmet and stared deeply into the grey-blue eyes of the man behind it. She placed the ring on the helmet and began to weave a web that adhered the ring to its surface. The loop encircled a small opening in the metal where the mouth is intended to be. The liquid that filled the inside of the ring stuck to the silver and she assured him nothing could remove it. She kissed him tenderly on the lips and said, "The dead can speak if you're willing to hear, and I believe he may have choice words for any who dare to threaten you. Scream his name in a moment of battle, and your enemies will feel his wrath...
— Dimitri Ivyhollow, Tales of the Freehold Knights

Life as a Freehold Knight

Knights do not always wear their armor. They prefer not to wear it outside of combat or travel. Many are intelligent and charismatic, using their influence to arrange trade deals and political maneuvers to increase their standing.

Some rely on their fighting prowess to gain influence, fighting duels to secure new land and other assets. Duels are common in the freeholds, especially among the knights. When a knight challenges or accepts a challenge to a dual, they must put their lands and titles on the line, even if it is not a fight to the death.

Knights never fight inside their armor, especially when fighting a challenger who isn't a knight themselves. When two knights dual to the death, it is usually without their armor, or any armor at all, as the winner inherits the armor of the other if they die, but one only deserves such spoils if they demonstrate true skill without needing it.

Knights also have duties befitting the nobility. Many rule over their own freehold, and must govern it as well as protect it. Knights often have their own families as well, and train their children for when it comes time for them to inherit their armor.

This will be one of the classes for the game that can be unlocked by players when they reach the freeholds. They are meant to be a valuable asset that can easily be a detriment if players cant adapt to their beliefs and work around them. The inspiration comes from Don Quixote, stories of medieval knights and the concept of chivalry.