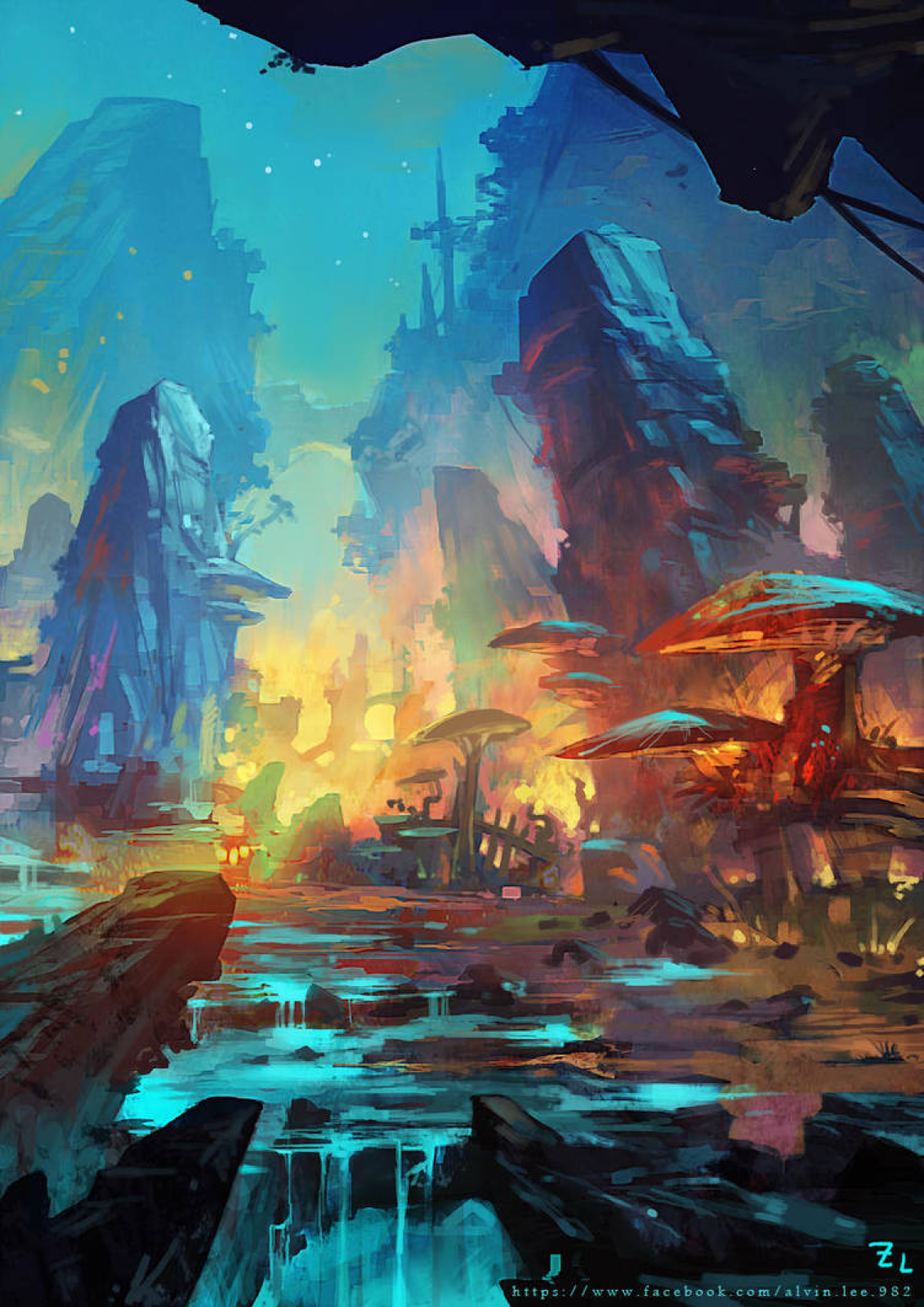 What? Leave? You must be joking...

Simon inspected the supplies with appraising eyes. Each barrel of wine was accounted for, every member of the expedition ready to depart. He looked up to the nearby wagon and the Lartasian girl sitting in a wooden chair. She was painting again. Softly and deliberately stroking on a canvas atop an easel. She had long black hair tied into a bun with brown eyes and skin like white silk. she wore a loose and flowing dress. A Kimono, she called it, with vibrant floral patterns dancing up and down her frame. Her hands danced across the top of the canvas in a single stroke. The picture seemed to form before his eyes. A landscape of the countryside emerged as the paint dribble down. The trees in the painting danced as if blown by the wind and Simon cleared his throat. She turned to him and smiled. "Were about to leave, do you have everything you need?" The girl nodded and spoke in a soft and flowing voice, her accent thick and hard to place. "Yes, I have already begun work with your Pathfinder." the woman pointed to a rolled-up sheet of parchment in a tube attached to a saddle. Her name was Kai, one of the Lartasian cartographers. "Are you anxious to get back home?" "Not at all, Anxiety is not something I am familiar with," she said as she packed up her things, placing each item meticulously into the wagon. "Is that everyone from your country?" she gave a wry smile. "Lord Gray...I do not come from a country. Lar-Ta-sia, Ozlithian for a nation of many kings."
"My apologies, for both my error and mispronunciation"
"not at all, Simon. You will find we Lartasians are quite agreeable."
"Why have you never mentioned these facts before?"
"It never mattered before." Simon pondered a moment watching the woman pack.
"Why now?" he asked, "why have you been sent now of all times?"
"it is time you learn of the ways of my people. If you are to meet us, it's important to know who we are. We are lulled and content due to the ailment that is found in our lands."
"Mania, you called it?"
"yes, as a girl i was exposed to it. I felt..." she paused, trying to think of the words. "happy."
"Happy?"
"Yes. extreme happiness. it is where I discovered my love of art. I wandered into the woods and saw the brightest hues I've yet to see anywhere else. There are Colors unimaginable to those who haven't seen them. There was a Suilosune, a luck dragon, named Tak who found me. The creatures in mania are very curious. They are playful and seldom unkind."
Simon listened carefully enamored by the idea of creatures that were actually kind.
"He fluttered over to me, a wyrm with butterfly wings no bigger than the dogs you have in the kennels. He says, 'Why are you so small? you must be the smallest human I've ever seen,' and i replied, 'i'm bite-size, for the predator's convenience.' he laughed if that could be called a laugh and we spent the afternoon studying the art of movement. how colors dance as light changes. I spent all my childhood in that forest."
"I suspect this story doesn't end well." she nodded.
"Do any of our stories end well, Lord Gray? Hysteria, when mania lingers for too long, it starts to drive creatures mad. One night, just before i was to go home, we heard a rustling in the trees. A beast emerged and if it were not for my dear friend and tutor, I would not be here today." she gestured to the set of pressed butterfly wings in her window. They were red and yellow and had golden scales that fused them to a now missing body.
"I'm sorry." he said slowly.
"Why? I'm not. He died the way all things should: defending what he loved with a smile on his face."

Exposure to mania and Hysteria is enough to feel its effect. Like all universal ailments, it's unknown why or how it transmits the way it does. Exposure to Mania often leads to euphoric sensations and a feeling of extreme relaxation. The elation leads one to care very little about consequences and makes one prone to chase all desires regardless of the harm it may cause. The effect Mania has on flora and fauna is truly unique. Creatures found in mania are seldom normal creatures found in the area. These creatures are neither mutated such as with melancholia nor are they created by mania. The creatures that reside in manic areas can often communicate and look remarkably unusual. Their vibrant colors match the land as they meander through, talking to any who walk by. Colors begin to saturate as one enters mania. it is a beautiful scene.
Hysteria by contrast only occurs over long periods of time. As mania goes on, creatures turn more violent and savage. Emotions are felt deeply to the point of no control. The vibrant colors on the land become almost luminescent and the glow is abrasive to the eyes.

leaving the manic or hysteric area is the only way to alleviate it. Though many who have been exposed tend to be very creative afterward and often seem lethargic. In Lartasia, where this particular ailment can be found, the population often indulge in it. Many believe mania is the cause of Lartasia's bizarre customs. Some go so far as to say that Mania created The Tablin, as mutation can occur in rare cases usually involving eating manic fruit. The people of Lartasia are well known for their miraculous inventions. They have technology that many in Estoya would see as magic. The indulgence if many are directly tied to these inventions.

I started off thinking that mania would be a really easy place to hunt; just pick up a few rabbits that are high out of their minds and they probably won't care up until the point when you snap their necks.   That all went to pot when you said animals and people go crazy in there too.

Also, I wonder if lartasian garments and art is gray and dull outside manialand because everyone is too used to it's color-enhancing effects...

I.... I mean.... Damn that's a really good idea... hadn't thought of that. Its possible, and yes. Hysteria is a big deal lol entire communities have been killed because of a rampaging beast on more than one occasion. Plus Jhoterordenes are created from it. There is always a give and take from mania. Some of the maladies wont even do that much. XD