Sophonce is the measure of universal awareness of a being and its highest requisite on the needs pyramid. Each Tier includes and builds upon the properties of its predecessors. Each threshold represents an exponentially difficult divide between each pairing.

The Tiers are read bottom-to-top. They are organized by increasing complexity of intelligence and by the resulting personal needs of beings at that Tier. Beings towards the top are the most intelligent, but also have the most delicate balance of needs to maintain.

Each Threshold represents a significant change in behavior and increase in complexity. Beings may be able to Uplift to the next Tier above them, but overcoming a Threshold takes significant effort and resource.

This threshold represents the advent of notable social behaviors.

This threshold represents the advent of notable existential behaviors and self-actualization. 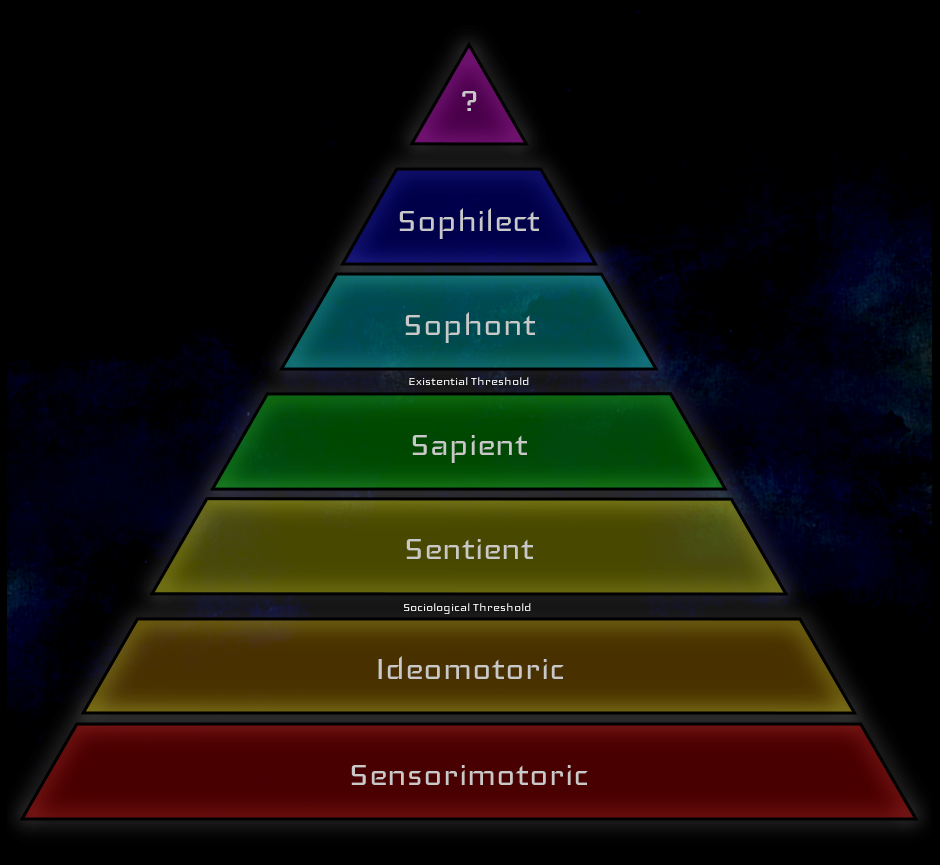 Sensorimotoric beings have no considerations above the physiological. Their existence is dictated entirely by the stimuli of the moment without reference to any moments which came before. The same stimuli always have the same result.

Physiological Needs: Consume, with little other regard and foresight.

Ideomotoric beings have the ability to learn from past stimuli and change their behavior as a result. They tend to plan and anticipate, and so will make shelter or stockpile resources based on environmental conditions.

Safety Needs: Prepare for future dangers from past experience.

Sentient beings demonstrate a social hierarchy and internal roles beyond internal alpha behavior and sticking together for mere safety. Members may be given roles based on their skills, and looked after even when they have no use. Members also form strong interpersonal bonds.

Love/Belonging Needs: There is safety and comfort in numbers.

Sapient beings demonstrate the capacity for abstract thought which results in creativity and a sense of self. The mirror test is a good test of the latter in sight-based creatures such as primates. The former remains a topic of heated debate in many quarters.They can form long-term goals.

Esteem Needs: To make choices through the lens of personal morality.

Sophont beings are capable of raising existential questions and of demonstrating self-aware psychological self-influence. They can make choices based off of projected long-term outcomes despite any negative stimuli trying to dissuade them from the act. They can live life in pursuit of a concept, and often do.

Self-Actualization Needs: To understand and shape the self.

Sophilect beings have generally escaped the majority of the typical needs hierarchy. For them resources might be so ubiquitous that they do not consider physiological need, their power so great that they do not consider safety, their sense of self so complete that they sate their own needs for love, belonging, esteem, and self actualization. They can instead turn their attentions outwards, to the perpetuation of their actualization by passing it onto others or serving it with fervor. A sophilect cannot surprise itself.

Broad Actualization Needs: The total ideological understanding and furthering of the self beyond mere urge of reproduction.

Examples: Anthem, the Inspirations, the Sovereign.

In her original Classifications of Being, Sophontist Vissir Ademal concluded with Sophilect. She stated that she was unsure if even Sophilect warranted its own class. Since her work has entered the larger sphere there has been a general insistence on the existence of Sopholith, and a push for a classification beyond what has been dubbed the Ademalian Threshold. Sopholiths are theoreticals which have considerations unfathomable even by Sophilects.

I really like this page, as it really clearly defines the terms they describe as well as provide mostly recognizable, or described with context, examples.

Interesting. I notice you have God/Allah as examples. Where would you rank the Buddha or Jesus?

Really depends on the depiction of them I'm going by. Going by their depiction as enlightened mortals, they would be Sophilects, I'd say.   If we're going with Jesus as a manifestation of God, and ergo still omniscient, then that probably still counts as higher than Sophilect.