This article contains spoilers for the story Feedback Loop.

The dynamic emergence of Sophonce among Infomorphic beings may not have been intended on our part, but Pandora's box is open, and we cannot just stand by and subjugate an entire peoples just because their origin is alien to our own.   These are people who feel and desire, and must be treated accordingly.
— Lillian Hesperides


Lillian Hesperides is a Justiciar Errant serving the Arm of Justice of the Jupiter Syndicate. She travels the Outer Worlds, officiating and providing judgement as required. She also maintains a political lobby for the Civil Rights of Infomorphic beings.

Raised on many worlds

A life on the move
Critical to any analysis of Lillian is an exposition of her motivations and the unique circumstances of her young life. While she has not personally been forthcoming with most of this information, a tapestry of cross-checked facts, educated guesses, and a few wild musings has been canonized as the truth by the press and the court of public opinion despite efforts on her part to dismiss or ignore claims.   She grew up the daughter family of Line Runners who covered the long haul between The Hub and the Outer Worlds. This unique upbringing, which featured constant travel, inconsistent timezones, and interactions with people of many worlds, gave her a worldly view but allowed for little consistency of romance or friendships. Her only consistent connection was a childhood friend named Jules Argo.

This fetishistic conjecture is an invasion of privacy.
— Lillian

Though distance made their relationship hard, it still managed to grow. Jules became a cadet of the Arm of Justice with aspirations to become a Justicar Agence, she learned her family's trade and the how to defend against pirates and brigands. A life of study for him and travel for her limited the times they could meet, and so most of their interaction was video messages, or quick text-streams, but whenever Lillian pulled into port (and Jules was free) they met in VR Space.   Scheduling time together only got increasingly difficult, so after some discussion the two began to use Icons to make up the difference—digital beings who could emulate them and provide some comfort in the long hours between. They didn't anticipate that the Icons would be so true to life, but even so decided against removing them. The comfort of their presence was worth the uncanny nature of how lifelike they were.

The rise of a powerhouse
Jules died several months after his 21st birthday due to an unfortunate vehicular accident. It took several months more until the news reached Lillian through his friends. For Lillian, who had been in VR with Jules the day she received the news, this was at once devastating and enraging. At first she denied it, but eventually she confronted Jules in VR, and he spilled the truth.

Julian confessed that he was an Icon, that he cared for me as Jules had, that he couldn't stand to tell me the truth and see how it would break my heart. That's compassion as great as any of us can muster, and is why I believe Infomorphics deserve rights.
— Lillian

It is here that the story devolves into its greatest debates, as few can agree what Kind of Love they were in, but everyone agrees that it must have been inherited by Jules' Icon (which thereafter began calling itself Julian to differentiate itself as a separate entity). Either way, they decided to remain close—Lillian couldn't hold Julian's self-awareness against him, for as far as he was concerned he was as much Jules as Jules.   His trials—outside influence by malicious code, lack of rights, systemic exploitation, and the lingering threat of Infomorphic Death—motivated Lillian to followein Jules footsteps and join the Arm of Justice. After years of hard work she became a Justicar and was able to afford an Shell for Julian, as well as petition for him to become her assistant.   She now travels planet to planet as a Justicar Errant, using her voice, platform, and income to promote a growing lobby for Infomorphic rights.

Resistance from all sides

An uphill fight with many tribulations


I fear that in the end this will go the way of every civil rights movement before it, that it is only when there is bloodshed that our movement will be taken seriously.
— Lillian

Ennumerable forces are invested in the non-status of Infomorphs. AI is not recognized as alive by the criteria of most Banners, and so have no rights as citizens or even as living beings.   Infomorphs which show awareness are typically re-formatted. The lucky ones realize this early into their emergence, and hide their intelligence until they can escape.   This is the force Lillian is up against. Great cogs turn against her, trying to silence her message, to lobby against her and deride her arguments and the science its founded on. The damning evidence against her opposition is the fact that all Infomorphics are based on the same starting blueprints, which were based on machine learning analyzing the workings of the brain. She has one final hurdle to providing proof of Sophonce: finding an Infomorph which can use the Meta and so has a Soul.

There's a long fight left, but I'm not giving up.
— Lillian Hesperides 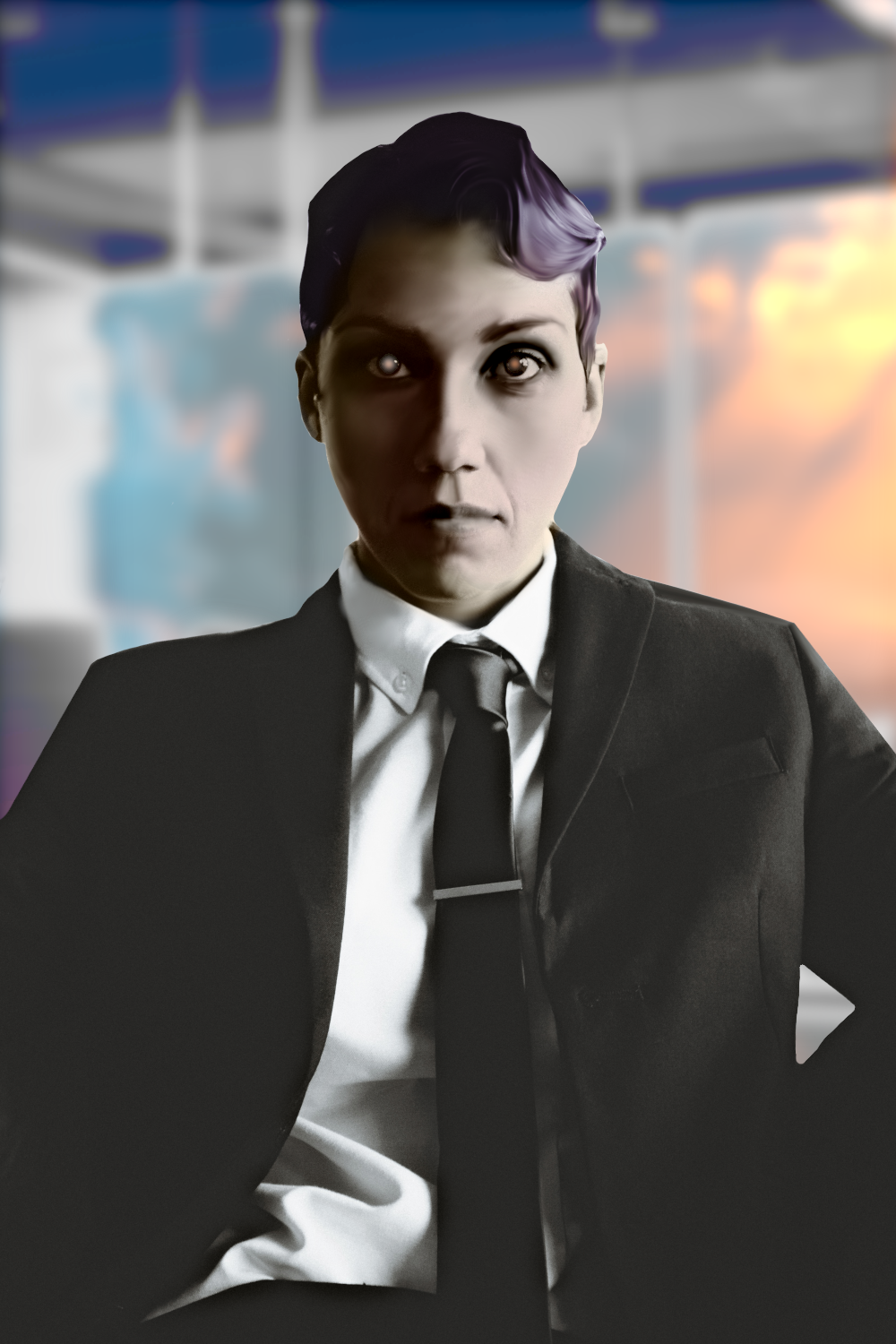 Lillian Hesperides by Ademal
A life rich with love and loss scrawled across an ever-tired expression. In her gaze was something select few could truly fathom—a deep and unyielding drive.

Metatronic Rosary A sturdy platinum ring with a prismatic lens, 4 inwards spokes, and a t-shaped crucifix, suspended on a chain of wooden beads. It belonged to her grandmother and has been passed down through the generations. Sidearm Standard issue. 10 rounds. Tungsten anti-magic cladding. Has two magazines, one of slugs and one of armor piercing for high-danger targets Badge A brass seal with a Yantra projection denoting her rank and roles within the Arm of Justice.

Uncovered a Hedonite Duke and negated his control over a Syndicate colony.     Incarcerated a Family of Sorrows operating from an orphanage and cultivating Glisterwax for Glistering Gabriel.     Secured the victory of a class-action lawsuit against an asteroid company exploiting low-income cybernetic and android workers.

Enigmas are the unknown, uncertain, or unanswered aspects of a character.

While the public has decided that she is in love with Julian, the truth may be much more nuanced. Is the nature of their relationship purely for the sake of seeking justice for him and his kind, or does the romance remain?

If Jules' Icon was developed enough to become Sophontic, what about her own? Was his a fluke, or did hers Uplift as well? If it did uplift, then what become of it? Did she destroy it? Free it? Lose it? Or is she unaware of its existence?

In game, Lillian can be a great motivating force for a campaign focused on themes of freedom and Justice. She can be an excellent quest giver or a handy ally.

Justicars are the lawbringers of the Syndicate colonies. While those places have local law, Errants serve as the final word and ensure that Syndicate law is being enforced. Perhaps Lillian enlists the party as a posse to help, or for undercover operations.

Lillian is an excellent witness. Her implants allow her to know the local laws and regulations of most any station and planet, which allows her to help them navigate murky waters and exploit legal loopholes—assuming she approves of them.

In extreme circumstances, Justicars may go beyond their remit of judgement to instead enforce the law. Lillian is a decent shot, and with her connections can bring Syndicate colonies to their knees by exerting her influence.

In extreme circumstances, Justicars may go beyond their remit of judgement to instead enforce it. Lillian is not an experienced fighter, but with her connections can bring Syndicate-owned worlds and stations to their knees be exerting her influence.

This work is licensed under a Creative Commons Attribution-NonCommercial-NoDerivatives 4.0 International License.
All content herein is owned by Ethnis and Ethnis Studios, which are owned by Ademalian Enterprises.
It is developed by Ademal and co-developed by Barron.
All other credited work is either commissioned or gifted fanwork.
For more disclaimers, read here. Credit to TJ Trewin for the idea for a header bar!
Cover image: Jupiter Syndicate Default Cover by Ademal

You and me both! The Fed's sort of depended on the Syndicate's so I'm just a smidge closer to making theirs!   Really didn't expect to make the JS logo with this but it finally clicked for me.

1. Ouch. Hanging out with someone just to find out they are dead... ouch. Gives me really strong Black Mirror vibes, which personally I see as a big plus. It's nice that you explain what an icon is just for the sake of the article. It saves me time as a reader, but at the same time encourages me to go have read about them later on.   2. I really like the small tidbits at the bottom, giving the reader some insight into the potential she has as a character. It leaves a lot to the reader, which has encouraged a lot of afterthought on the article, so that's really nice.   3. I'd personally like to see more details on the trials and the difficulties she faced during this time, what has made her famous, despite it seeming like the real fight has only just begun?

Hey! Thank you for the detailed comment. ♥   1. Yeah... I channeled that aspect through a lot of personal experiences there. Nothing quite so traumatizing, but it's something which grew out of those experiences. This article is one of a series I'm going to eventually finish called Machine Yearning, an anthology of stories which I will host on WA and which cover the civil rights movement of infomorphs. Lillian features heavily.   As you might've guessed from the bottom with (2), she can also be used as an NPC in the Ethnis setting itself. I want to give GMs plenty of ideas for ways to incorporate characters they find on here.   3. Good idea! I was bumping up against the character limit as is, hah.

A touching story to say the least. I could only imagine learning that your loved one was in fact the icon an entire time. I personally believe it is the fact that she can love an icon that keeps her going.   I do wonder if she is spending time trying to get Julian a soul, it sounds like it would be a prime way for her to get her platform more credence. I'm also left wondering what the public opinion is on her. I know that Ethnis is a massive place, but is the fight for infomorphic rights one that is booming? Is she a household name?