Goddess of Strength, The Queen's Champion

Before she was a goddess, Rielik was a mortal daelin woman. A leader, an inspiration to her people, a constant source of strength and stability. The Creator saw these qualities in Rielik and approached her with an offer of divinity.

Initially Rielik refused his offer. How could she, in good conscience, leave her court behind in the pursuit of a higher power? They depended on her. Looked to her for guidance, for advice. But the Creator was persistent. The other daelin they had approached had readily accepted, but Rielik refused his offers time and time again.

At first, the Creator would just approach Rielik. As time went on and she refused more of their offers they tried a different approach - sending Adrieldas in their stead. The hope was that, having kinship with Adrieldas, would make the offer more appealing, but this only seemed to irritate Rielik and drive her further from accepting.

In time, the Creator stopped asking altogether, finally coming to accept Rielik’s choice. It was not the Creator, nor Adrieldas, that would entice Rielik into eventually accepting divinity. Such honour would go to a different, unlikely source.

As I followed the weathered path back down the mountain, my skin pricked with unease. The sense of being watched. Followed. Was there a predator lurking in the snow banks, waiting for the opportune chance to strike?

"I warn you now beast, I am an arcanist of storms," I called out.

There passed a beat of silence. Then came a cold, booming laugh. Echoing all around me, yet I could make out no figures in the waning light.

"Dear arcanist of storms, I am no beast," a voice replied. Cracked, mocking. "And you are the one who should heed my warning. Leave. Do not return. Should I see you grovel at the feet of the High Queen again, I shall strike you down with fire and fury.

Excerpt from "The Stone and the Storm"

As someone who was once mortal, Rielik has a strong moral code. Overstepping when it comes to that code is a big no. Now, this doesn’t typically matter to the average mortal, but for those that worship her it can result in severe punishment. For those actively against her, overstepping that code is seen as a sleight - death would be a mercy for those who intentionally cross Rielik. She is willing to forgive though, should the mortal show regret for their actions.

As one of the first daelin, Rielik was not born through normal means. She awoke, as if from a dreamless slumber, as a daelin woman who looked to be in her early twenties, as all of the other ‘first’ daelin did. The gods had gifted these daelin with basic knowledge of the world and who they, as a species, were to become.

Rielik, alongside her sister Adrieldas - bonded not by blood but by heart and soul - became leaders of the first two daelin Courts. They worked together for the most part to bring prosperity to their people, but their friendship soured when Adrieldas left her court in favour of divinity.

Realising that the other Court would not survive without a leader, Rielik merged the two together. This Court became the Je’nasie (or as many daelin refer to it - the ‘Court of One Heart’). As the sole leader Rielik encountered many difficulties when trying to make a home and a legacy for her people. She preferred a team approach and was, initially, very reluctant to call herself a ‘Queen of the Court’, especially considering the monikers of some of the gods. Eventually, she would accept the title, but after she had created positions in the Court to help advise her on all manner of topics. These positions being the Aid and the Sword.

At first, Sar did not understand his sister’s obsession with Rielik. What could a Goddess possibly see in a mortal, after all? Once Rielik took her place among the divine it became clearer to him. Her strength and loyalty were traits to be admired, and he quickly discovered that Rielik could be quite cunning when the situation called for it.

They became unconventional friends. What with Sar becoming enamoured with Rielik’s own sister, Adrieldas, it made sense that the two pairs gravitate towards each other. Though that friendship soon melted into a friendly rivalry.

Sar began to test Rielik at every turn, from her might to her mind, to ensure that she was still good enough for his sister. Every time, she rose to the challenge with a grin. Despite the ever increasing difficulty of the challenges, or their ridiculous nature in some cases. She found that they made her stronger too, so she never stopped indulging Sar’s antics.

Rielik, like the rest of her people, was grateful for the gods that had given them life. Out of all of them she felt most connected to Valis. As the Goddess of Law, representative of leadership and power, Rielik would call to her for guidance, though she never expected an answer.

Nor did she expect that the Goddess would ever turn her eyes towards her - a mere daelin, a mortal, her life the result of Valis’ own boredom driven mischief.

But Valis surprised her. She would join Rielik on hunts with the rest of the Court. At first, it was a source of entertainment, and a way to keep watch of her creations. Soon, it became something more for both of them.

Valis, though she was loath to admit it at the time, became infatuated with Rielik, whilst Rielik herself thought that the Goddess was just toying with her. So Rielik confronted Valis, seeking honesty, and Valis relented without much resistance.

Their night of passion changed things for Rielik. She began to think more and more about the offer that the Creator had put forth all those years ago - being divine would put Rielik on equal footing with the Goddess. That, and spending time with Valis had begun to change Rielik’s opinion on the other deities. She has seen things like a pure and genuine curiosity that seemed beyond a Goddess’ nature, she had seen Valis relax around her Court, she had seen a smile slip through a usually neutral expression. The Goddess that Rielik had come to know seemed less like a divine being and more like a normal person with every passing day.

Though Valis reassured Rielik that her mortality was not an issue, Rielik eventually approached the Creator and, finally, accepted their offer. Little changed in their relationship after that. Valis would act as Rielik’s guide through divinity and a confidante in her times of need, whilst Rielik brought out something in Valis that she didn’t think she would ever have - an understanding and appreciation for the mortals who shared their world. 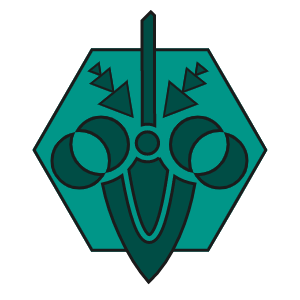 Rielik tends to favour her the appearance she had when she was mortal - that of a daelin woman clad in dark dyed leathers, wearing a cloak the colour of forest leaves. However, she will vary her form for short periods of time to imitate those who show great strength.

Rielik, as she did when she was mortal, favours the spear as a weapon. Often she is seen wielding two spears. One longer, designed for thrusting melee attacks, and the other shorter, designed to be thrown.

At her strongest (radiance), Rielik represents:

At her weakest (umbrage), Rielik represents:

“Not the wisest are you, little arcanist of storms?” A voice called. Behind me. Unexpected.

I turned and there stood the Goddess of Strength, donning worn and bloodied steel plate, as if she herself had just returned from battle. Perhaps she had.

“I seek an audience with the High Queen,” I replied, resolute.

The goddess tilted her head, amber irises glowing under the light of the burning sun. Contemplation set deep in those piercing orbs. “I am torn, little arcanist. Are you brave for defying my warning, or foolish?”

Excerpt from "The Stone and the Storm"

Lions - a representation of strength. This symbol is often shared between Rielik and Valis as a sign of their unshakeable relationship. Where Rielik is concerned, the lion also encompasses her vanity

Eagles - a representation of power, longevity, and Rielik’s ascension with the eagle's natural flight being equated to Rielik's 'rise' to divinity

Horses - a representation of confidence and vitality

Peacocks - a representation of confidence and the flaunting one’s confidence, mixing nicely with Rielik’s umbrage of vanity

Badgers - a representation of confidence and strong will, in direct opposition of Rielik’s umbrage of lacking self-control

Amaranth - a representation of the immortality that came when Rielik ascended

Fennel - a represntation of inner-strength

Foxglove - a representation of insecurity, a strong indicator of Rielik's umbrage of self-doubt

Sage - a representation of health, wisdom, and respect

The Gold-Spear Hearth - her final home as a mortal. It will always hold a special place in her heart and the Je’nasie Court has turned it into a shrine for her - well kept by those who make the pilgrimage to it

The Shimmer Woods - just south of the Gold-Spear Hearth. These woods were frequented by Rielik in her mortal life during hunts with her Court. They are also the location for her first meeting with Valis

Vessen Spire - a towering mass of twisted rocks. Rielik found herself at this spire during a time of great need; injured, without her weapon, and struggling to tap into her newly acquired divine powers, she was eventually helped by a mortal stranger

She watched me, gaze narrowed, burning embers shining out through the darkness. Swirling, unbridled rage mixed with the faintest hint of fear.

No. Not fear. Rather a calm, grim acceptance.

I remember thinking - stood mere feet away from a being so powerful she could tear me asunder without so much as raising her hands - what could possibly make a Goddess accept her death? What disaster struck, so foul and tragic, that even she could not rise to meet it with fire and fury?

And after that, another thought. One that cut through my own anxieties, one that forced my feet forward, closer still until I could reach out and touch her steel-forged skin. I am a healer, like my mother before me, and surely healing a Goddess is no different than healing my kin.

A note torn from an unknown journal
Deities of the Realm

Ma'rune is a fantasy world created by SunlanceXIII. All written content belongs to SunlanceXIII and all artwork is credited to the appropriate artist.