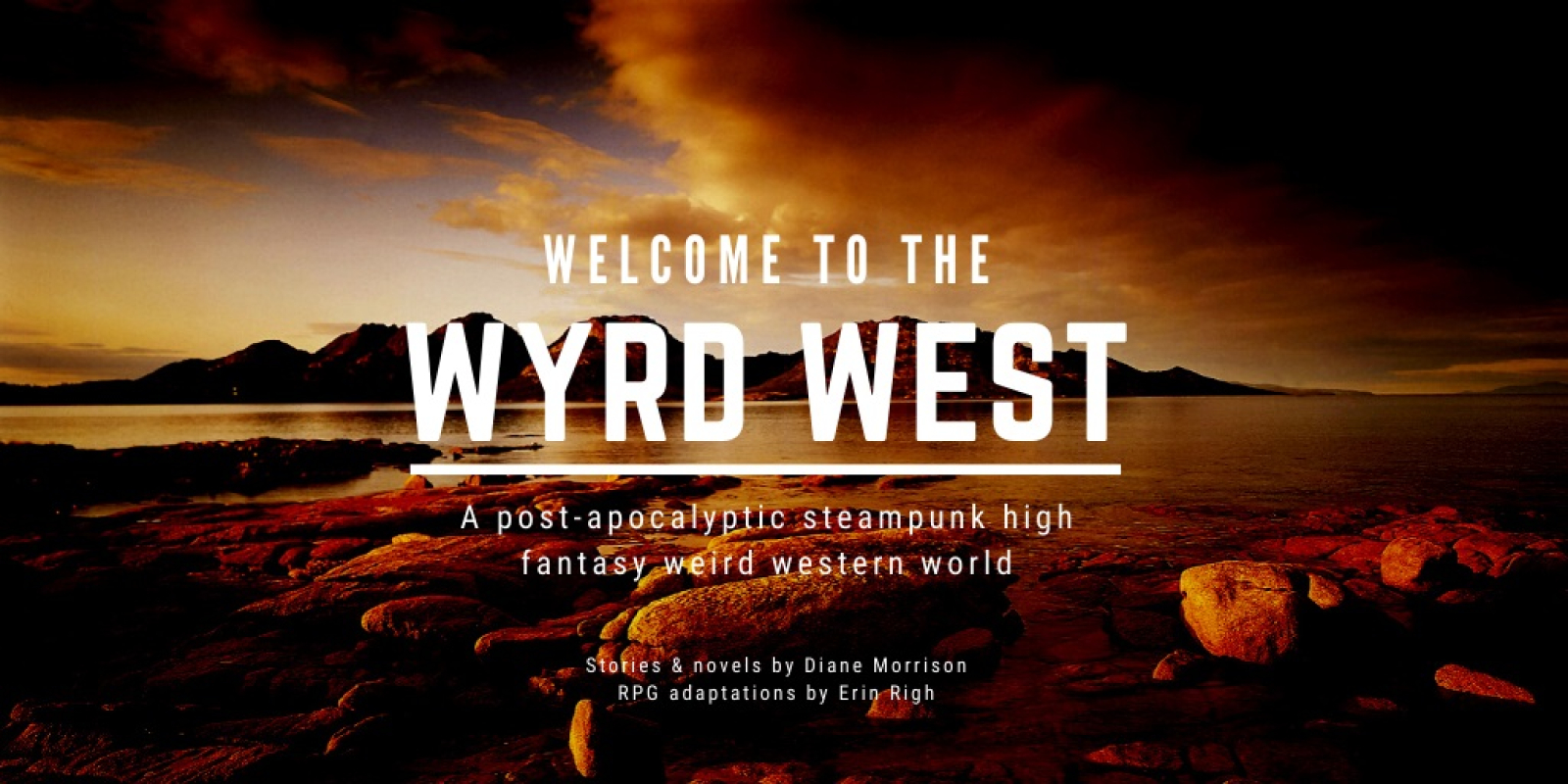 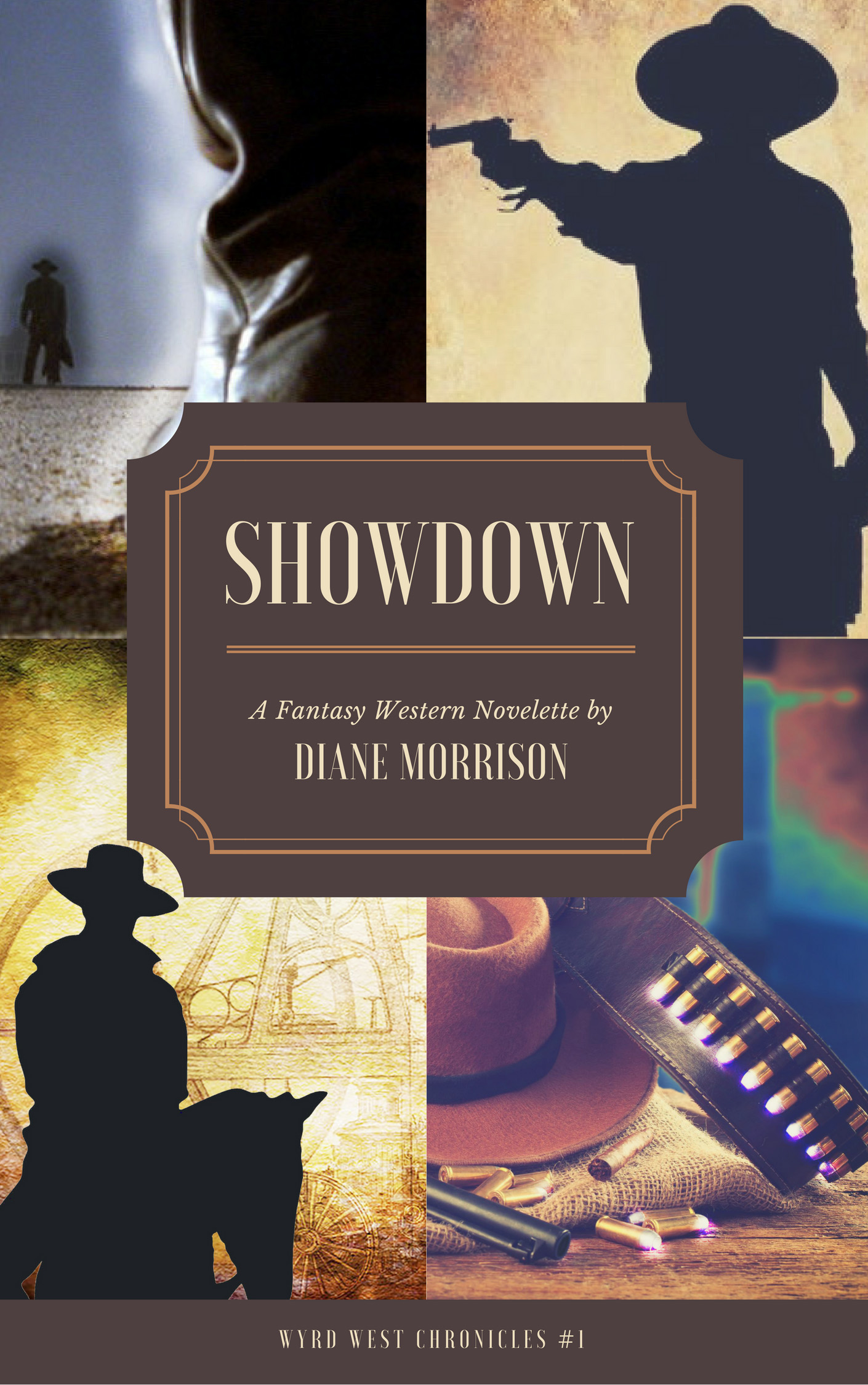 The Desperado spat. “You ain’t goin’ to start something you can’t finish, are you, boy?” he sneered in a cold rasping baritone. His eyes were darker than coal-black. No apprentice then; this man had sold his soul to Hell and leased it back at compound interest. “You’re so wet behind the ears I don’t reckon you can sprout a beard yet.”   Graeme turned his head just slightly so that the Desperado could get a glimpse of the pointed ear sticking out of his hair under his hat brim.   The Desperado’s eyes narrowed. “Fuckin’ faeries,” he growled, almost under his breath. “Well, guess I got no real idea how old you are. But you smell like children to me. Why don’t you go back to your farm and leave the grown-ups to do their business?”   Graeme thought about the Gunslinger this man had cut down. He could still hear the gurgle and wheeze of her struggle to breathe. He could smell the iron of her blood seeping into the dust.   “I don’t think so.”

In Queenstown, an untried youth is the only one who can face down a notorious Desperado. But Graeme Walsh is not a Gunslinger: not yet. Will his training and his secret sorcerer's powers be enough to get the drop on the Outlaw, before the Outlaw gets the drop on him?

Read this story for free!

BOOK 1: SHOWDOWN in Once Upon a Time in the Wyrd West

Or you can purchase it on Amazon.

Want this in print? Get Once Upon a Time in the Wyrd West here!

And subscribe at my Patreon link below to get the whole Wyrd West Chronicles serial and the Toy Soldier Saga in serialized chapters!

"I had no idea what to expect when I started 'Showdown'.I was initially put off by the capitalizations of what I took for time worn stereotypes: the Desperado, the Gunslinger, etc. Then Graeme let us see his elven ears and I was THERE. From that point on a black hole couldn't have sucked me out of the story. Horses with opinions? A Gnome pitching a line to a Gunslinger's sister? A ghost offering advice to that same Gunslinger? Oh, yeah, I'm definitely into this world."
— Bonnie Milani, author of Home World and Liquid Gambit

"A book friend told me about this world of gunfighting elves and I knew I was hooked! Then the writing was great, and that was a bonus!"
— Shane's Book Club

"The author describes SHOWDOWN as a "Weird Western fantasy-cattlepunk short-fiction serial." Seriously! That description made me laugh and doubt that I'd get past the first few paragraphs. But I was firmly entrenched after the second sentence. Everything about the story intrigued me. For a short, or story of any length, her characters are astonishingly well developed, each with a unique voice. While I’m not a huge fan of fantasy--it so often feels forced to me--those aspects of the story were deftly woven into the plot and through flashbacks. Morrison has a knack for description and world building and paints her scenes in the same way an artist paints a picture. Only the reader doesn't just see the story but hears and smells it, as well. If I'm gushing it's because SHOWDOWN deserves to be gushed over. I can't wait to read more installments."
— Troglodyte, noted Amazon reviewer

"With vivid descriptions and a world you can almost reach out and touch, Showdown is a story that pleases. It's hopeful and gritty in all the right places with crystal-clear characters and a touch of tongue-in-cheek humor. Loved it!"
— Kindle Customer

"When I first started reading, I wasn't certain that it was my type of book. The author has a distinctive style and her use of 'flowery' prose seemed at odds with what I was expecting to encounter. Silly me! Once I settled into the plot and allowed the characters to engage me, I was hooked. I'm glad to see that this is part of a series."
— Mythspinner

"Love this colorful cast of characters in this exciting genre mashup. Characters were very well developed. Well worth a read, and need more!"
— Amazon Customer

"I heard about the author's series and immediately was drawn to the idea and its inherent drama. I immediately purchased book 1 of her Wyrd West series and read it. Fantastic! The author has seamlessly blended standard fantasy tropes (elves, gnomes, demons, holy power, sorcery, etc.) with elements from steampunk in a mixer of classic westerns. The result is bang on. This is top shelf writing with a beautiful vision. I'm totally gonna read the heck out of Diane Morrison's collected works."
— Robert W. Easton

Printed in: Canada & the United States of America

Featured in: Once Upon a Time in the Wyrd West

For my mom, for many things, but mostly for giving me the gift of a lifetime of joy in reading.

You can read Showdown, along with the first six of the Wyrd West Chronicles, in Once Upon a Time in the Wyrd West! Click on the book cover above!

Graeme had never seen anybody shot before. His father had warned him that it was nothing like they described in the stories. His stomach twisted like a coiled lariat. The stallion beneath him tossed his head in challenge.

He’d sensed something; he wasn’t sure what. It was almost like a smell, an unpleasant undertone of mold or rot in a barrel of healthy looking apples.

“Well, there ain’t no one else, is there?” he finally answered. “I’m a Gunslinger’s Apprentice.” He met his sister’s eyes and held them fast. “What else could I do?”

His father had shown him the craft and the trade. His tanned, calloused, thick-fingered hands guided Graeme’s alabaster, fine-boned fingers.

“Ol’ Joss there told me what happened, Squire. Sure I can’t interest you in anythin’ fancier than the standard pine box?”

He was never able, after, to say exactly what happened. His will had reached out to the wildfire as though embracing kin, but his command was firm; go around!

Graeme slapped leather and pulled the pistols. His shots came in rapid succession, firing from the hip: ba-BAM! In the Spirit-Realm they left shining silver tracers through the air.

“‘Ashes to ashes and dust to dust,’” he rasped through his roughened throat. “‘From ashes we come, and to ashes we return, and the Lord and the Lady watch over all.’"