If you’re down on your luck, and you need coin, suffer it out.   Tighten your belt, give up on what you don’t need, and look for extra work. Anything you can live without, then live without it.   The last thing you want to do is make things worse.   But that’s what too many people do. They make it worse by looking to someone who only cares about his own holdings…and how your sufferings can increase it.   I’m just saying, there’s a reason they call Jack Black the Widowmaker.

When you enter his office, you’ll be greeted with a smile, but don’t you believe it. Widowmaker isn’t a kind, generous man. Oh no. He smiles to put you at ease, to get you to feel better about your decision to ask such a wealth man to borrow his money.   A giant of man he is, standing at nearly seven feet, he’s almost as wide as he is tall. A coal grey beard covers his face, hiding the pock marks and knife scars he took to get to this moment in life. He sits in his fine chair, behind the hand-carved desk, surrounded by men who look like their eat children for breakfast.   If you question his intent at any time, Jack will laugh his pleasant laugh to disarm you. It’s a card trick, using slight of hand, so you only see the coins he’ll drop into your purse, not the knife he’s placed into the small of your back.   I was about to say something like "If you were smart," but you’re not. You’re talking to the Widomaker, which makes you an idiot — so lets cover terms.

What You Now Owe

Any deal made will be in Jack’s best interests, and that starts with the interest in the coin you take with you. Fifty percent is how it starts, though he tells you that the first week is free. It’s not free, though. This is what he tells you to throw your motivation off. You’ll think you have more time than what you do, and you’ll waste it.   When payment comes due, Jack will show up to collect. If you have it in full, you’re done. He’ll tell you he’s there for you anytime you need the money. He’ll even say your next load is at half the interest. Don’t do it. He’s a shoddy bastard and he’s reeling you in to take all you have.   If you don’t have the money in full, he’s bound to smile, then place an overgrown arm across your shoulders. He’ll say, "I like you. You’re a good guy, so Ill give you til sundown to pay me." Then as he leaves, he’ll turn and pull his favorite necklace from under his shirt.   The one with all the fingers on a chain.   "Oh, and while you’re finding my money," he’ll say with his wicked grin, "think of which digit you don’t mind me taking, alright?"

It Only Gets Harder

Consider yourself lucky if you only lose a digit and a bag of coin.   If Jack has to come back again, he’ll be happier still — because this is what he wanted on the first place: complete control. You now belong to him, and if you don’t have his coin in full, he’ll look at who you are, what you have, and don’t be fooled by his ‘code’ of not hurting women and children.   Because he has not qualms about selling them to the highest bidder.   If he hurts, he’ll do so maliciously, taking great care not to affect your ability to earn coin and fill his pockets, the interest piling high. If he has to come back a third time, you’re done.

How Jack Got His Name

No one welshes on Jack. Not a single soul, and do you know why? Because the moment you walked into his office like and idiot, he was smiling at a corpse. That’s Widowmaker’s secret.   He only loans coin if he can profit from your death.   …and without you there to protect your family, he can. Women and children fetch a high price in the right markets.   Like I said, if you’re down on your luck, and you need coin, suffer it out.   Hell, if you're so desperate I’ll loan you the coin, and I’ll only charge you twenty percent.

Answering: "a person considered villainous or monstrous"
Visit WantedHero's Competition Page Check all other answers to this prompt Competition Homepage

All artwork and content is ©2005 - 2023 Jaime Buckley. All Rights Reserved.
This site is a work of fiction. Names, characters, places, brands, media, and incidents are either the product
of the author’s imagination or are used fictitiously.
We do not take submissions of ANY kind.
Proudly powered by World Anvil. 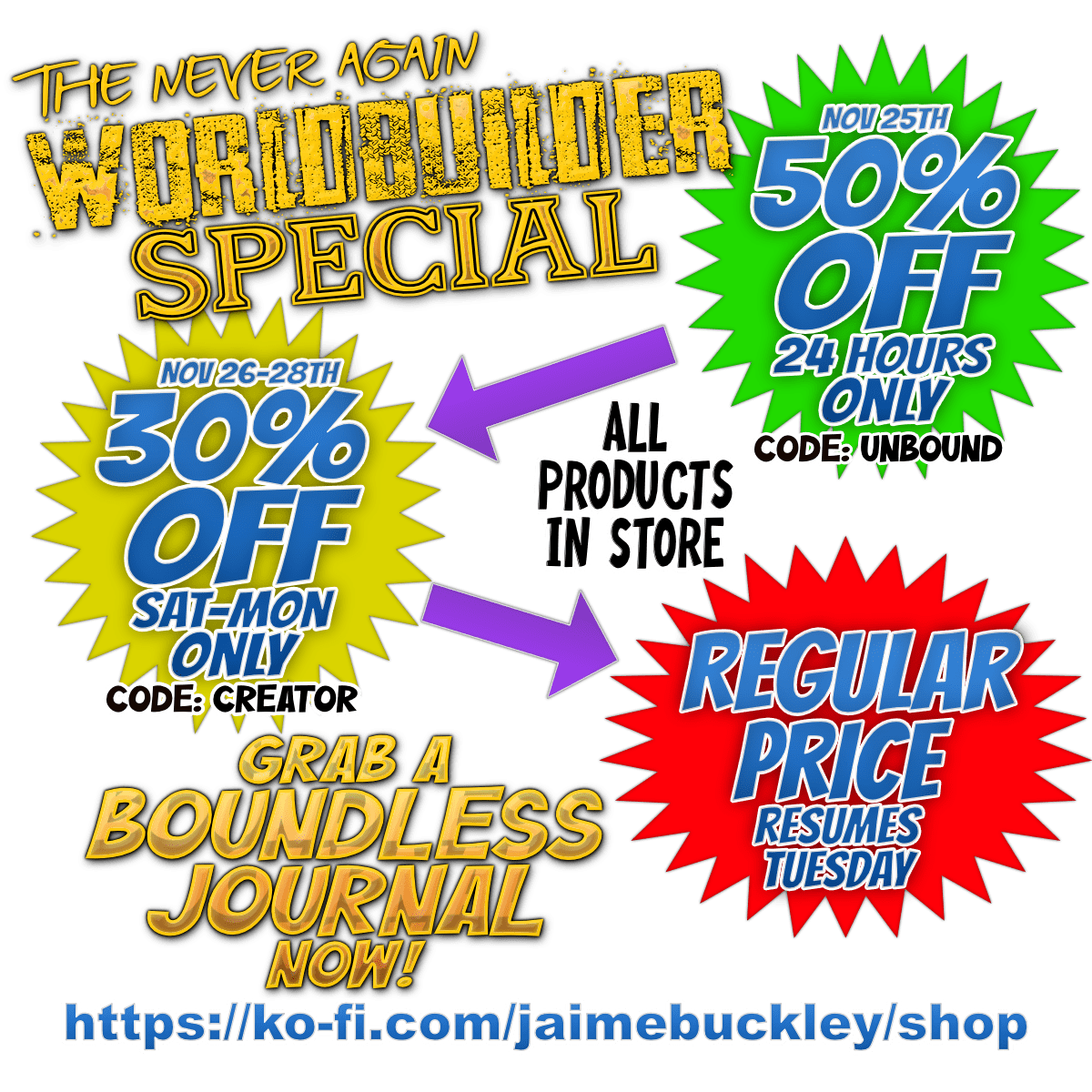 One of the things I enjoy about the writing of Jaime Buckley - Wanted Hero is the bright and cheerful nature. Even when the bad guy is a true villain, a monster, even when he is hacking off your finger for being late on payment it is cheerful writing, a cheerful monster.

Is,....that a GOOD thing, though? Doesn't my writing seem limited that way?   It's just the way my mind currently works.

My friend, I wrote this recently for myself ...

The path forward is about reflection of the past and the courage for the future.

So lets reflect on the hearts you have touched and the smiles you have created with your words, your books, your passion and your unquenchable love of life. This could never be a bad thing, be proud of the road behind! Now for the road forward, change is natural and inevitable. Sometimes we change just rubbing up against those around us and become shinier rocks. Sometimes we change because we must go through tragedy or choose a new direction. The courage you exude everyday will whisk you forward.


Featured Articles in the Shadow War across Creation by Graylion

Have I mentioned lately that I'm ever-so-glad you are my friend?   (grin)