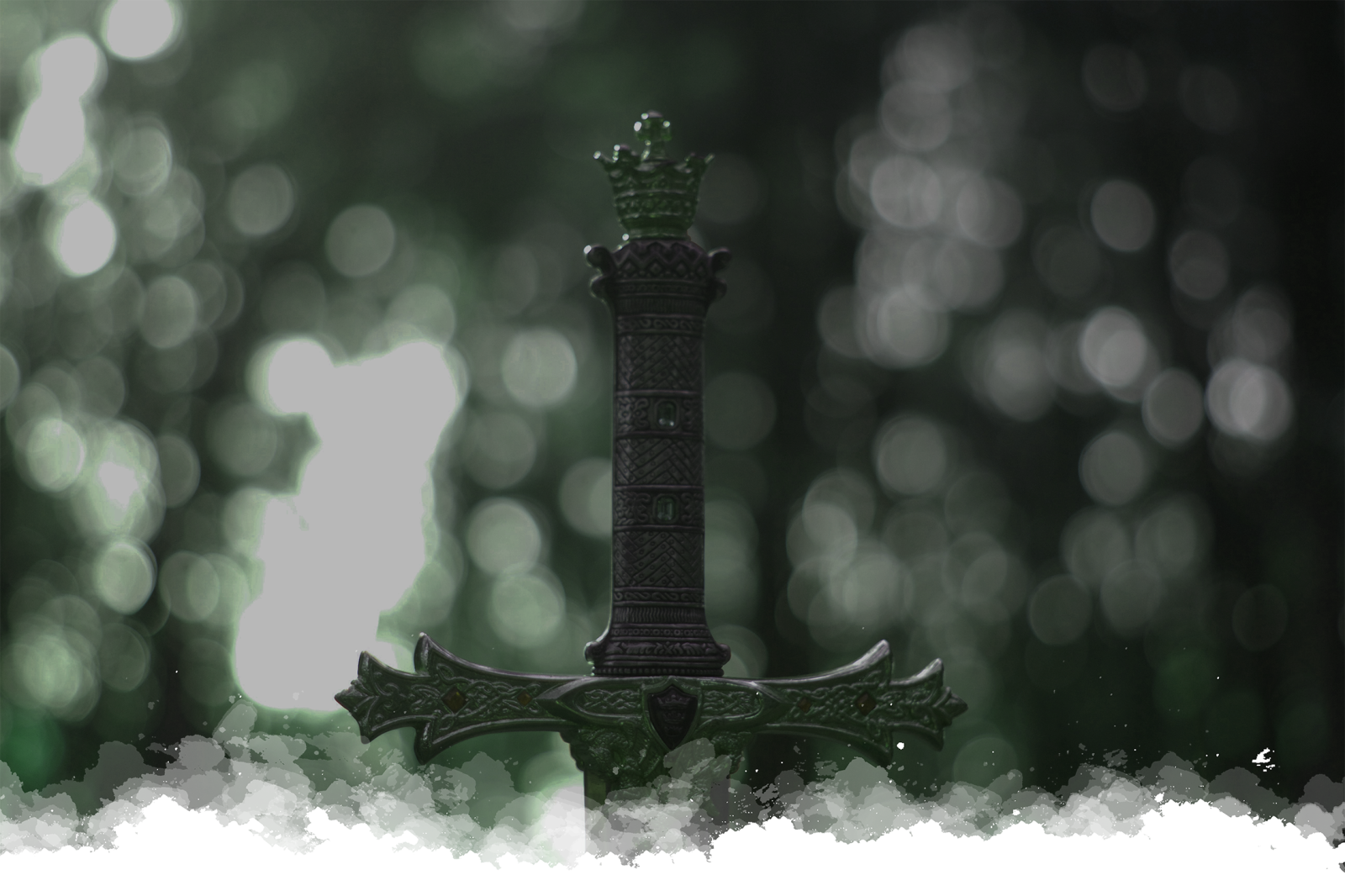 The Grail Knights are one of many enigmas in The Web. These men and women forever wander the earth in hopes of fulfilling a promise, the details of which they can't remember. A select few among them believe themselves to be Knights of the Round Table and recall memories of the past that they shouldnt have.   These original Grail Knights are believed to be where this lifestyle originated. The Grail Knights are not an organization so much as practitioners of a profession. There is little to no hierarchy in their ranks. Grail Knights have been known to take on squires and pages to assist them in their eternal quest, but once made a knight, all are equal.   What is most fascinating is their weapon of choice. Rarely will you see a knight with a gun, opting for the more honorable sword. These swords are no ordinary weapons. They are powerful artifacts, the details lost to time or kept secret by The Knights. They are bound to their blade, and their blade to them, but none have revealed why or how this id done.


Knights of the Round

Those classified as Grail Knights must meet a certain set of criteria.

The only individuals who are allowed to become squires without first being pages are those who have an acceptable amount of martial prowess before their official training. It isn't clear why the knights believe they need attendants, nor why they insist on training them in the sword when modern weapons are far more effective. Most of the time, one must begin as a page. Pages are taught how to fight with a sword, as well as the individual chivalric values the particular knight that is training them holds to. When they can spar with their mentor without making too many mistakes, they will officially be recognized as a squire.   A squire is much more important than a page. Squires not only bear the sword of their mentor, but also actively fight alongside them in battle with one of their own. Under the protective eye of their mentor, they gain hands-on experience. When this stage of training ends depends on the knight and the squire. Some won't become a knight until their mentor is killed, others become a Grail Knight when their mentor feels they are ready.

The Mists of Avalon

The island of Avalon is a topic of much debate among those who attempt to study The Grail Knights. It's a topic of conversation that any of these knights are happy to have, although there's not much information they can give.   Avalon could be a physical place, likely the place where the christening of a new Grail Knight occurs, or it could merely be a metaphor for the afterlife the Grail Knights wish to have on completing their forgotten promise. This theory comes from the fact that upon the death of every Grail Knight, their final words will be ramblings on returning to The Isle of Apples.   Avalon is described as a paradise, and is considered a legitimate place by squires. They take it upon themselves to return the sword their mentor used to this island. This leads some to believe that this is the promise all Grail Knights end up making, facilitating an endless cycle.

Grail Knights die all the time, often at the hands of each other. Their services are used by organizations of The Web who need something a little more difficult to kill to handle a problem. The Suits of Four Seasons handles these negotiations and it's customary for two Grail Knights to meet each other and have opposing goals.   The importance of the sword in these clashes cannot be overstated. The nameless sword, often considered a source of their power, is the only weapon allowed to be used during these engagements. The knights have a rigid code of conduct when facing each other on the battlefield, and interference can be considered dishonorable and even met with hostility.   A curious fact about the sword is it shatters when the knight it was built for dies. The pieces are gathered by the squire, who makes it a personal mission to deliver these pieces to Avalon. This quest is taken on instinct and the squires do not always know why they are doing it.

Grail Knights and The Web

The Grail Knights are considered benign, and chivalrous mercenaries. Few will actively engage one in battle unless they are a Grail Knight as well. Some conflicts can be completely shut down simply by having a Grail Knight present. This need not mean it happens often.   Grail Knights are costly, a form of prevention on the part of the Four Seasons. While the Knights gain a substantial percentage of this, Four Seasons will actively raise the price out of proportion to prevent The Grail knights from exploitation on the part of other organizations, as well as preventing the Knights from becoming a powerhouse themselves.   The knights are decisively neutral unless they're chivalric values, or a contract requires them to pick a side. Those who come across them find them delightfully entertaining, despite the fact their Immortal Decay makes them prone to emotional outbursts.

Casey McCullough is the latest Squire to be accepted by a Grail Knight. As a scholar of The Alexandrian University, she wanted to become a page for personal reasons regarding research. Within the year she was elevated to a squire. Her mentor, Sir Boris, believes her to be the most promising of the three Squires he has.   The reports Casey sends back to The University become more infrequent by the year, but provide a treasure trove of insight for The University on how the Grail Knights operate. She believes the knights require squires and pages to adapt to a modern and ever-changing world. Casey also proposed a unique theory regarding the connection to Arthurian legend. Casey believes the oldest Grail Knights may well be the legends of old, though some may only suffer from the delusion that they are.   She believes the Grail Knights should be divided into two distinct categories: true Grail Knights and Pretenders, whose only purpose is to ensure the longevity of the true Grail Knights. It should be said Boris actively chuckled when she proposed this theory to him, indicating he knows it is wrong, or at least not entirely correct.

Something commonly observed among The Grail Knights is a rapid onset of immortal decay. Immortal decay is a condition that occurs as immortals age beyond the mental capacity their brains were designed for, causing amnesia and insufficient mental clarity.   Usually this occurs around 500 years of age, but can happen as soon as 120 years. The newest members of The Grail Knights exhibit this within weeks of becoming a knight. Regardless of their age or mental faculty, new Grail Knights gain this condition to alarmingly severe degrees. The reasoning behind it is unknown, but many theories exist.   Many consider this condition the result of whatever process it takes to be dubbed a Grail Knight. This process is always forgotten, or kept a secret by The Grail Knights, themselves. Others claim it must do with the swords they carry. The true answer may never fully be revered.
The Outer Web
Cover image: by Ricardo Cruz

There's much mystery in this article, and this is done intentionally. A story I'm currently writing will reveal answers to many of the questions this article proposes. Since it won't be submitted to any publication, I wanted to build hype around the story in those who read the article. In the context of the world, I wanted to make sure that the information provided is what those in The Web would be aware of. The short story is currently being written. I have all the articles I need to do so. It is called The Squire. Keep a watch on your notifications if you wish to read it! This article is much less about the profession and much more about the questions surrounding it. It's connected to the story, and is effectively Part 1. Do you have any crazy theories or expectations? Comment it. I'm curious.
Please Login in order to comment!

So according to the author's notes, you won't reveal whether any of my theories are correct; That won't stop me from theorizing, however.   The bit about immortal decay, and the bit about the duality of 'real knights' and 'pretenders' being not quite true makes me think that the original knights live on in the new ones... not just metaphorically but quite literally. This may be supported by the fact that squires instinctively take upon themselves the quest to return to the isle of Avalon when their master dies; It could be the spirit of their master, or at least the spirit that was inhabiting their master, is asking them to return their sword. That way nobody is truly a 'pretender', only the souls of true knights living on in new forms. It also explains the early onset of immortal decay because centuries of old memories are now living in a newly immortal body.   So, one knight gets a squire, dies, and so the squire takes up the quest and becomes a knight. Then that knight gets a sword, gets a squire, and dies. does the second squire now have to bring both of their swords to Avalon? Are there some knights walking around with backpacks full of sword shards from generations and generations of knights before them, all trying to find this ludicrously hard to find island?   I'm wondering what magical properties the swords have besides shattering when their owner dies. Being bulletproof would be a great start. Magic Zelda-style sword beams would be nice too, but that might be getting into prestige territory.   RPG balance-wise, because these guys are using swords their offensive power probably wouldn't be that great, but being immortal, (or at least sturdy) they would make GREAT damage-soakers, which I love. I might wanna try a grail knight with a grenade belt, though. A riot shield wouldn't be bad, either.   On the other hand, a knight with a particularly medieval flair would be cool too. I'm thinking a crossbow would be a nice addition to the tool-belt, especially when facing evasive ranged foes, and armor is something everyone in the web needs.   Another theory; much of the quirks of Grail knights could be chalked up to the gift of tall tales; tapping into the legend of a centuries-old immortal order of knights could have its drawbacks in the form of immortal decay...

Ooooo so I can't say if anything is right or wrong, but I will say some is pretty darn close.   I will say that no one ever carries more than one share, and some do spend years trying to find the island.   The swords have many special properties lol   I love the riot shield idea. The idea is to have them as bullet sponges, like a siege tower. Ok from a distance, but don't let it get close. They could carry any weapon they choose, but the sword is primary.   I love that you connect it to the gift of tall tales. Can't say if its connected though ;)   I love the theories! Can't wait to finish this! Thanks once again.