"How successful have you been, standing alone? How many victories do you celebrate? Or do you mourn the abundance of dead? One victory among a thousand defeats is not the start of further success, but an excuse for a sad continuation of failure. If we expect different outcomes from doing the exact same things that have led to defeat, our delusions will end our rebellions as surely as the Dentherions."

--Alaric, letter to the rebel leaders

The Wolf Collaborate is an alliance of individual Dentherion Empire rebellions, fourteen in total. While the peoples may not have much in common culturally, the hatred of Dentheria unifies them. 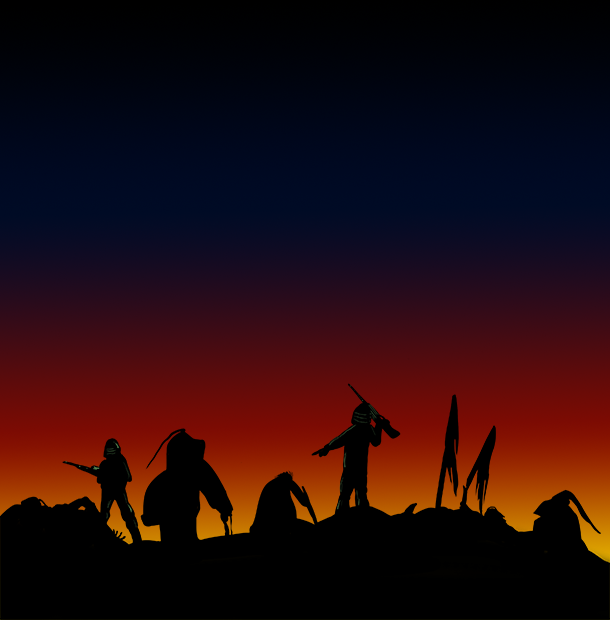 by Shanda Nelson
The Shale Alliance began in the country of Shaloar three hundred years ago, after their neighbor, Dentheria, invaded. Dentheria, who had an extreme advantage due to off-continent trade with a more technically-advanced culture, obliterated the mounted army with self-driving vehicles and advanced weaponry. After victory, they slaughtered several noble households and the royal family, and set a puppet on the throne who swore allegiance to them.   Enraged at the loss of friend and family, many remaining nobles formed a loose coalition with commoners and merchants, who not only felt the punch of heavy taxes, but the insult of having their land and homes stolen by Dentherion supporters. Thus they created The Shale Alliance, after a rock outcropping near their original meeting place.   The primary goal of the alliance was to drive the Dentherion invaders from their borders—a thankless undertaking. They did not have the support of a frightened populace, nor adequate weapons for battle. Rebels died in droves; the advanced technology that Dentherions and their Shal supporters used gave them an insurmountable advantage. Discouraged from frontal assaults, the alliance decided on sabotage as their primary mode of resistance. They managed the destruction or appropriation of some, but hardly most, supplies, and came into possession of advanced tech. Most of it sat in hidden crates, unused, due to tech ignorance and the severe punishments the Dentherions bestowed on any Shal in possession of it.

Dentheria, high from their easy success in Shaloar, marched across country after country, defeating armies and slaughtering ruling classes to make the remaining people more malleable to their rule. The Lord's Council decided to call the countries they conquered vassal states and created strict guidelines about what kind of technology each could possess. They placed this tech in the hands of the puppet rulers and a small number of their supporters and made it illegal for any others to utilize it.   The guidelines had unintended consequences; countries were stripped of the technology they already had, which affected every aspect of life. From medicine to farming, from communications to transportation, occupied peoples could no longer access that which once made life easier and safer. No motorized vehicles. No wired communications. Obliterating the farming equipment, medical tech and advanced medicines caused special harm, and death rates in general populations rose dramatically. The Lord's Council turned its back on the suffering because suffering people had more than rebellion on their minds. 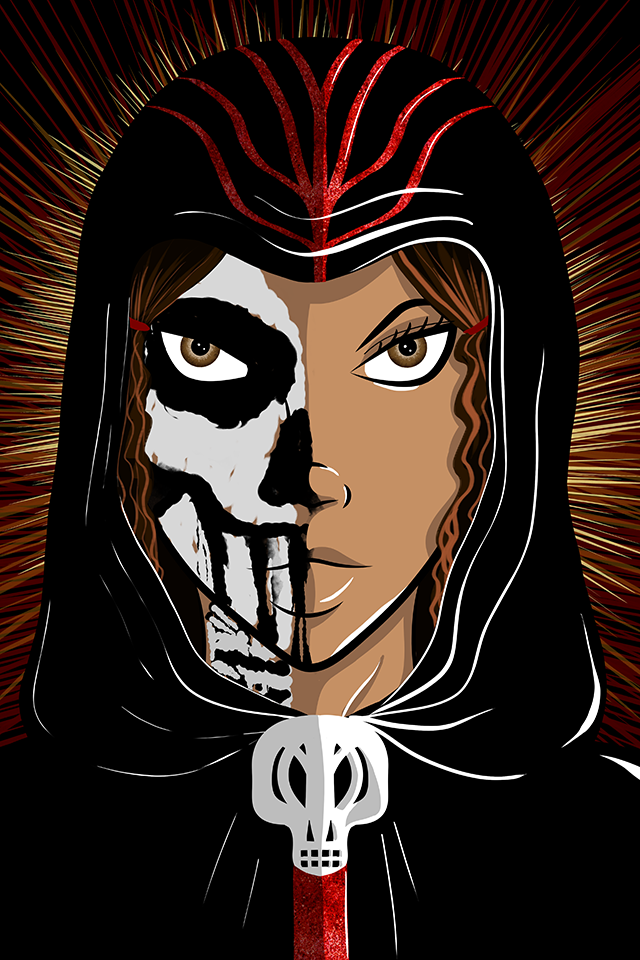 by Shanda Nelson
Ramira saw their population fall by a fourth. Furious at the lack of compassion and empathy, the elders of the Meint religion created The Skulls, a group intent on killing a Dentherion for every Ramiran citizen that fell to neglect. They stole explosives used in mining and set to work. They caused havoc at military outposts and Dentherion-friendly businesses, and managed to pilfer a bit of tech in the process.   Their success led to Hestoran rebels mimicking the same tactics. They annihilated the central Dentherion military outpost in Hestora. In response, Dentheria began a ruthless extermination of everyone they considered hostile to their rule, but managed to murder more innocents than rebels. This only exacerbated the discontent with their empire. 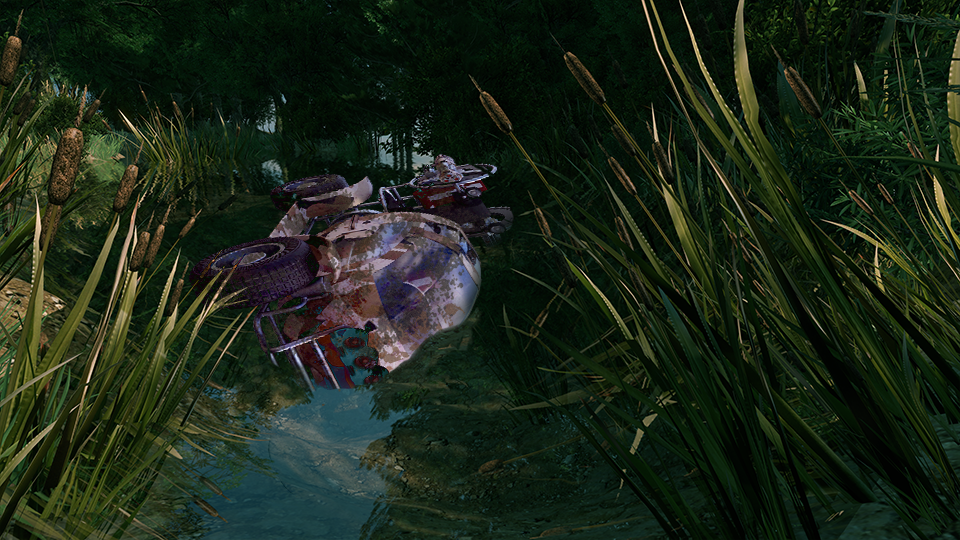 by Shanda Nelson; vehicle jazella on pixabay.com
Subsequent rebellions in other countries followed either the more muted Shale Alliance tactics or The Skulls deadlier approach. Neither suited the Dentherions. In an overwhelming show of strength, the renowned and malicious General Malk mounted an assault on the Ramiran Skulls 150 years to the day after they first conquered the country. Malk thought to crush them and therefore their influence on other rebellions. Instead, the Dentherions suffered a staggering defeat after chasing a group of Skulls into a marshland they had not mapped. Everything sank into the mire. They lost men, tech, and their sense of superiority; Ramira shrugged off a bit of their control.   Realizing their need to quell dissent, but also realizing those living in savage lands could initiate a devastating loss without technology backing them, the Lord's Council decided a different approach to the vassal states was in order. Under the leadership of Grandmajor Dezerand, the Council relaxed the regulations against technology slightly, allowing the puppet rulers and their supporters greater access to it while keeping restrictions for commoners in place. Dezerand, looking to better opinions of the empire's occupation, also lightened the punishments for tech transgressors to jail time rather than execution.   The changes initiated an underground trade in Dentherion tech. Much of it dealt with medical supplies, which Dentheria chose to ignore. Countries with access to medical tech were far more complacent and accommodating towards the empire than those without.   Legitimate merchants popped up, supplying the territories with items only made in Dentheria, like clothing, household goods, and tools. A small bit of wealth began to flow back into the vassal states through the shops, which mitigated some of the unrest in cities and towns. Not all found the better but still squalid conditions acceptable, and the rebellions grew. 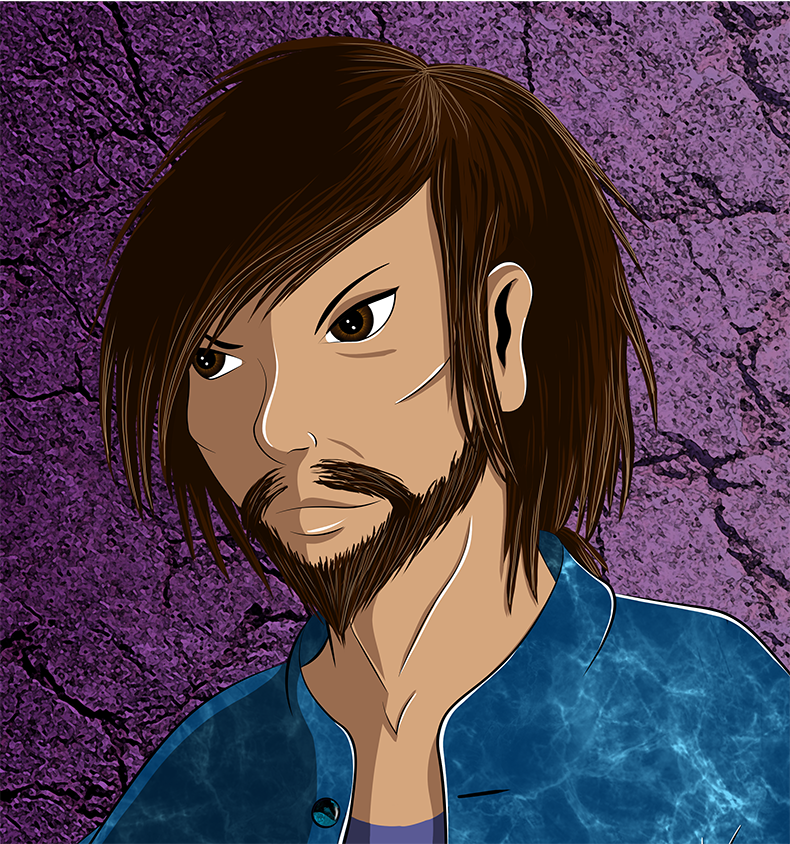 by Shanda Nelson
The Jilvayna rebels had decided to follow the Shale Alliance influence, but made no headway against the occupiers. Over two hundred years after the initial invasion of his country, the rebel Leader, Alaric, decided the only way to truly defeat the Dentherions was for the disparate rebel groups to join into a larger whole. This larger group would share information and resources, with a mind to acquiring weapons technology. He sent high-ranking members of the Jilvayna rebellion to out-country strongholds with the offer.   Not all thought it prudent to join, but the Shale Alliance leadership led the way again by accepting the terms Alaric laid out. The lack of progress individual rebellions had made in the last fifty odd years weighed heavily on them, and their Headman, Istak, thought a different approach might bring more success. Following their lead, even the Skulls accepted the alliance, though their Commander, Jarosa, demanded a large say in how it progressed.

The first meeting of the various rebel groups accomplished one thing; their name. They chose The Wolf Collaborate, to represent their intent on hounding the Dentherions out of their respective countries. While the groups squabbled among themselves about whom should have more sway in the new collaborate, all eventually looked to Alaric for leadership. He and his advisors implemented the standards for information and resource sharing, which helped bring success to all territory rebellions. With his guidance, a network of scouts and thieves began to steal information and tech secrets directly from the Dentherions and their allied rulers. Rebel raids became fruitful, and fewer of their number fell while completing missions.   Two major victories proved Alaric's vision worked. The first victory came shortly after the Collaborate's creation. Rebels cleaned out, then blew up, the Weapons Palace in Hestora, a hub for tech distribution throughout the empire. In the second, a combined effort by Jilvayna and Abastion rebels annihilated the Hellock Transportation Base in Jilvayna, where a great deal of military equipment was stored. 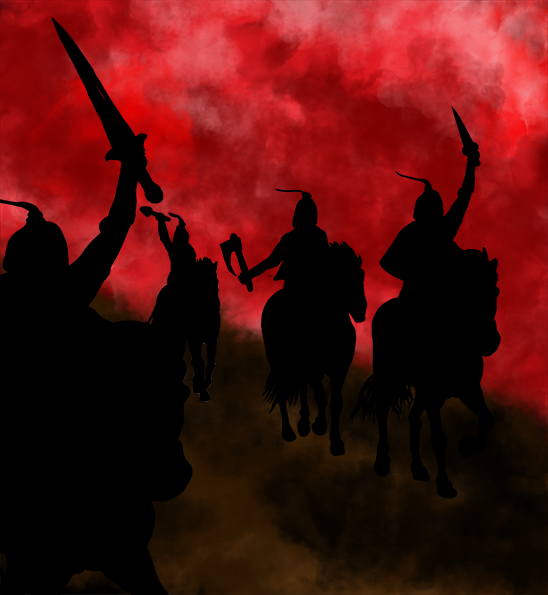 by Shanda Nelson
The Collaborate took a hard blow when the Jilvayna puppet king caught wind of Alaric's dealings and killed him and his family. His son, Faelan, who survived by not being at home that day, took the reins of leadership. Not all rebels found the idea of an eighteen-year-old Leader encouraging, but when the remnants of Jilvayna's ruling family promoted him, the other groups fell in line, however reluctantly. The most reticent demanded the creation of a ruling body, one that did not rely on any single person to manage things. They named this council "The Pack".   The Pack agreed upon two main governing rules: never have all leaders present during any particular meeting, and provide information and resources when a legitimate request was made. Physical information and resources, as well as the leaders' meeting place, found a home within a Meint temple complex sequestered in a woodland outside the Rimeran city of Qest. The Skulls jealously guard it.

The Collaborate's successes have gained notoriety in Dentheria. The media covers rebel events with glee because those stories sell papers. The idea of untechnological underdogs somehow managing to defeat the superior Dentherion armed forces and their puppet kings is riveting, mainly because the Dentherion people do not consider the rebels true threats to their own lives. Many are unaware of, or feign ignorance of, the conditions in the vassal states that have led to the insurgency, and neither the press nor the government are eager to enlighten them.   Not all find the current situation amusing; some Dentherions believe it shameful for their country to rule over other countries in such a depraved manner. Money is not the end-all, as the Lord's Council declares. These Dentherions wish to form an alliance with the Wolf Collaborate, hoping to support the rebellions in their bids to break away from Dentheria. They offer something that will sweeten any potential deal—access to weapons tech and instruction on how to use it.   Understandably, rebel suspicion concerning Dentherion motives is high. Aggressive meetings over the need for such an alliance have ended in hard feelings and distrust among the Collaborate members. Some believe this is the intent, but others declare those seeking an alliance only wish to right the past wrongs their people have wrought. It is a precarious situation, and a favorable outcome is not assured. 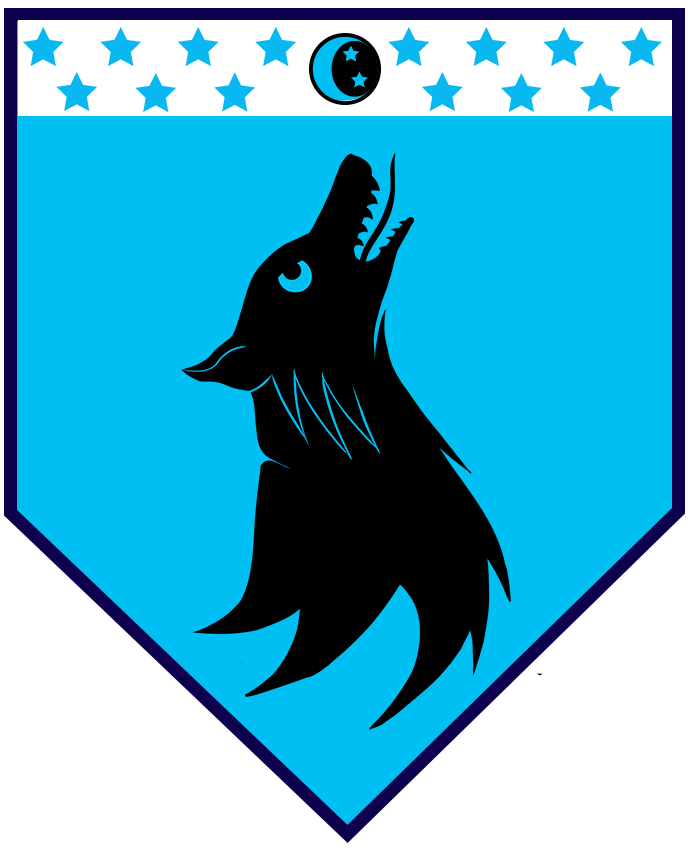 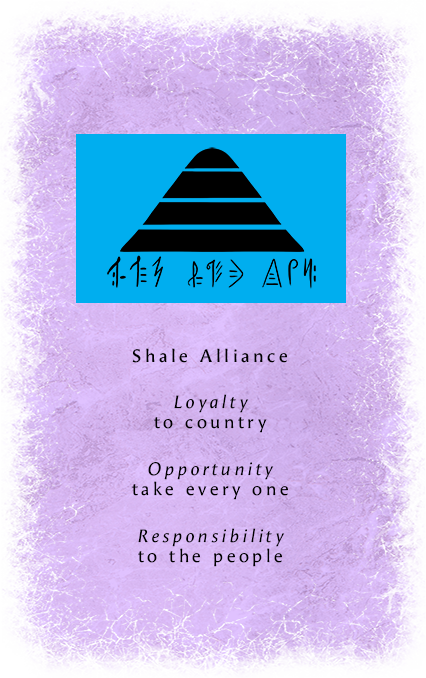 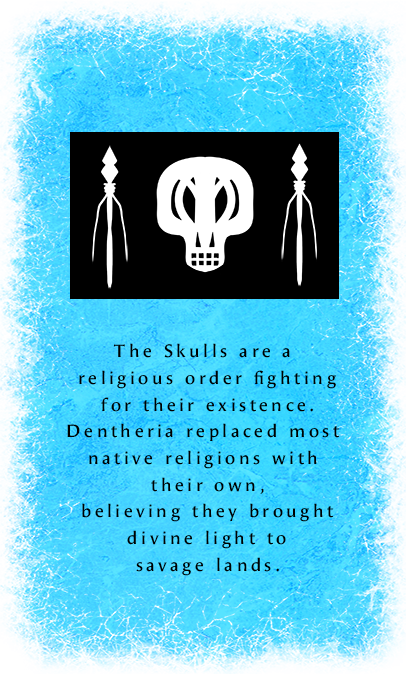 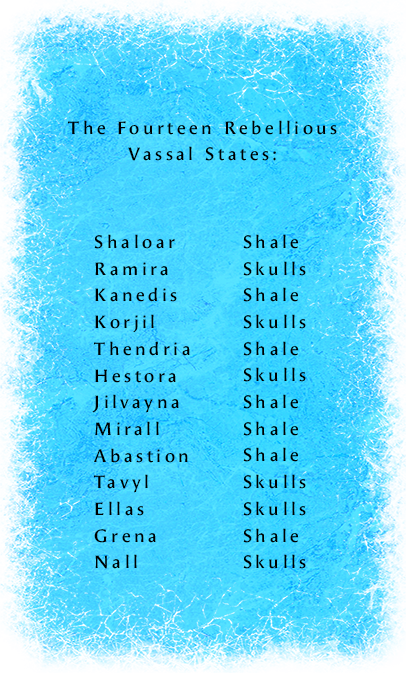 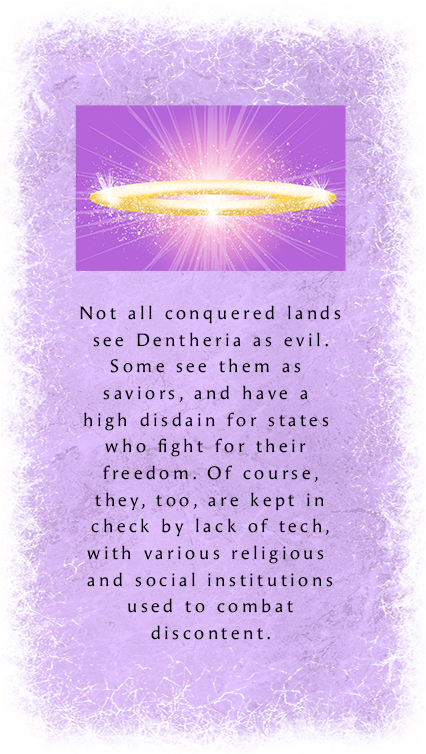 Return to Top
The Skulls
Factions