Bits:
Bits and half-bits are derived from the pristine rainbow shell of a common mollusk. The mollusks are farmed for this purpose. They are carved by master craftsmen, who intitially cut squares from the shells, then round the edges before stamping them with a special Dentherion tool and dipping them in laquer. Bit worth is dictated by the crown, and has nothing to do with the beauty or weight of the shell, though merchants tend to prefer the prettier bits to the plainer ones.   Bits are used to pay labor, skilled or unskilled, mediocre craftsmen and poor merchants. It is the most common monetary item in Jilvayna.
Silver:
Silver is considered “real” currency. It is Dentheria-approved, and the majority of it is minted there. It is used to pay more important people, like skilled craftmen, religious leaders, richer merchants, teachers, and the like. A half-silver is so rarely used only a few crafthalls produce them. Quart-silvers are far more common.   A silver is the same physical size as a bit. A quart-silver is the same physical size, but much thinner.
Metgal:
Metgal is a Dentherion-created glass used as physical currency. Conquered governments are required to use it and can only import it from Dentheria itself, and they are taxed for the privilege. 10 silvers=1 metgal. Few lower class peoples have ever seen a metgal coin, let alone employed one.
Bit-note:
Paper money, printed in Dentheria. It is the paper equivalent of bits, and used for transactions that require so many physical bits, it would be difficult to carry them all. It comes in 100 shell, 200 shell, 500 shell and 1000 shell varieties. To acquire them, an individual must exchange bits at a bank for a note, and the charge to do so varies from bank to bank. Typically, it is a 5-10 bit charge.
Silver-note:
Paper money, printed in Dentheria. It is the paper equivalent of silver, and used for transactions where physical coins are not an option. It comes in 50 silver (10,000 shells, 100,000 bits), 100 silver, 500 silver, 1000 silver, 10,000 silver, and 100,000 silver varieties. 10,000 silver-notes are used by wealthy aristocrats for large purchases, and 100,000 silver-notes are only used by federal governments to pay Dentheria for various supplies and taxes.


Dentheria prefers transactions in coin because those are easier to tax, but many occur through bartering and unilateral trade of goods. This is especially common in the countryside, where farmers and ranchers will exchange butter for feed, milk for eggs, etc. While such trade in goods is not as common in the city, trade for labor is. This is referred to sarcastically as "doing a good deed" and it is not taxed (though it probably would be, if Dentheria realized the intent). 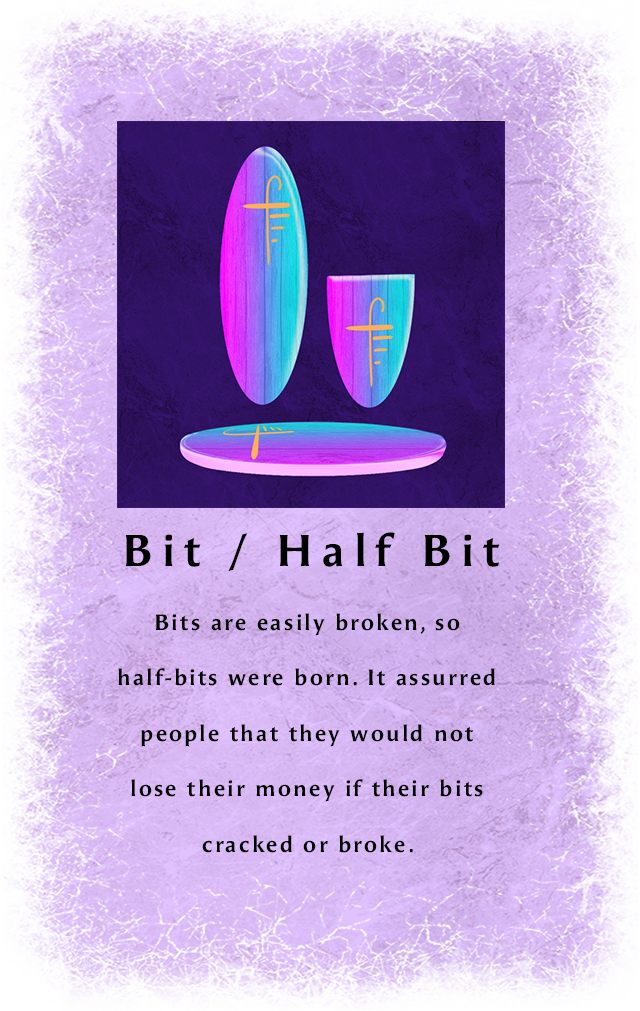 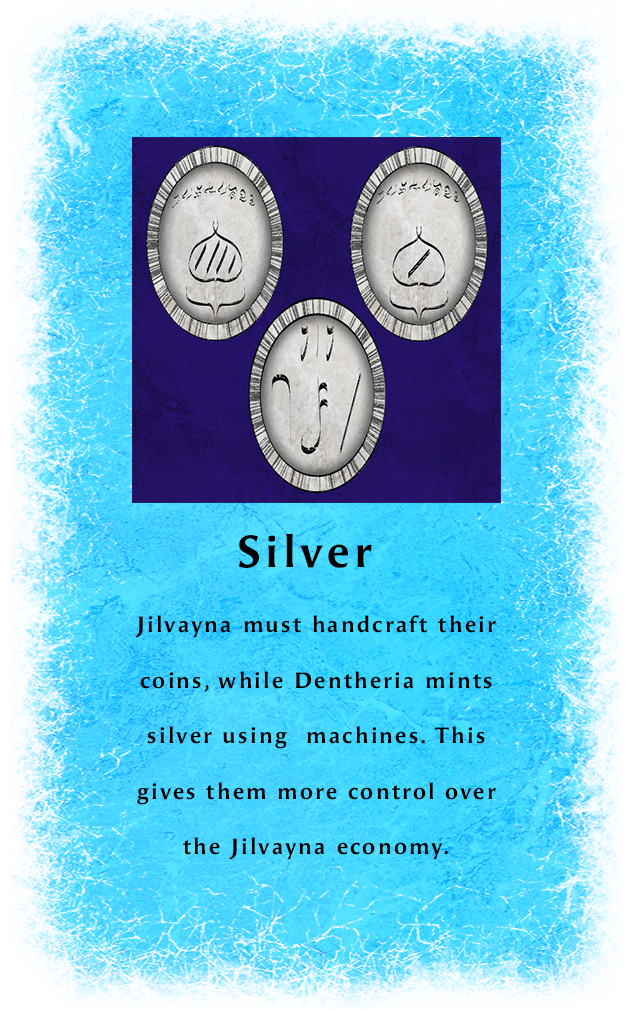 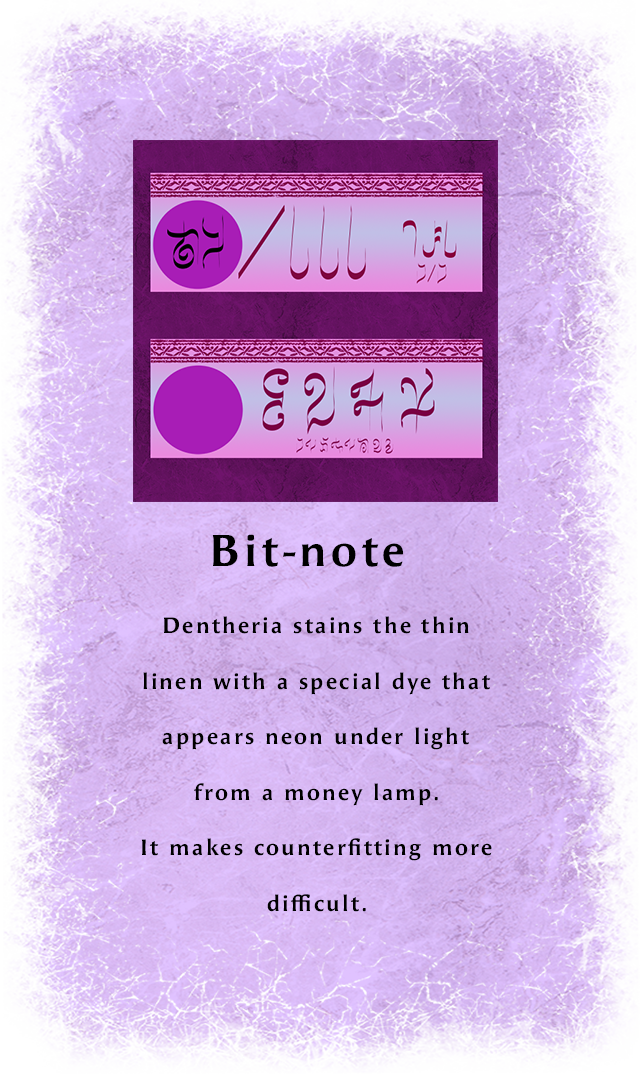 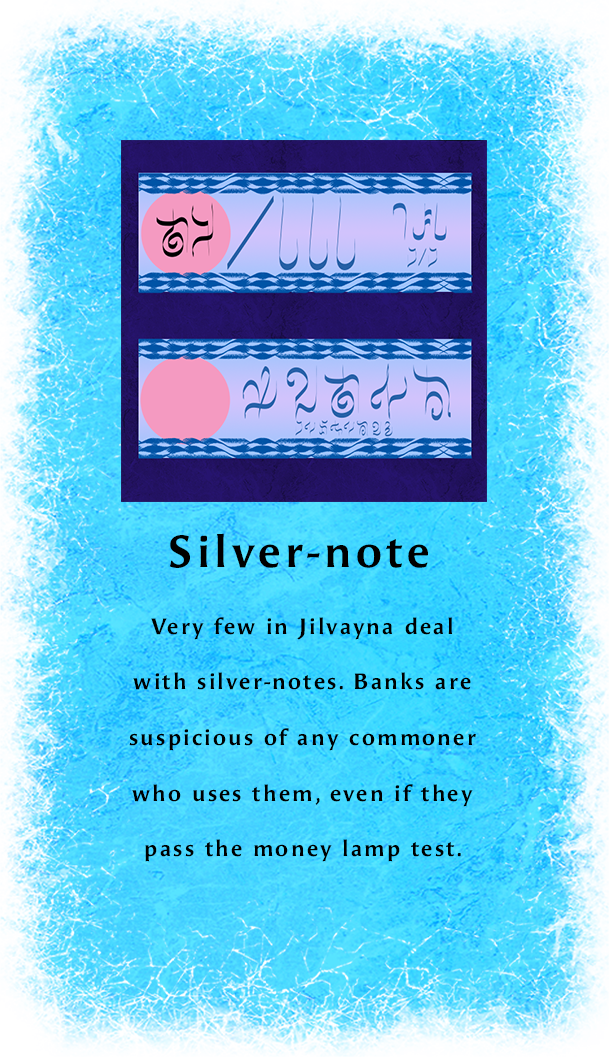 I like how your article includes the average yearly income. I feel that adds quite a lot to your article and the overall lore of your world. I also think the pictures to the side of your article supports it very nicely. Great work :)

Thank you! Thinking out currency was not easy, and I'm happy it worked out well!