The first falid I met threatened me to stick her rapier through my stomach so that she could take my blood in retribution for accidentally stepping on her tail. At that time I was about three times taller than her, and she didn't back down.
— From Min-aniara Laita's travel journal.


Falid ( fah-LID) are a species of sentient bipedal mice native to the west of the Dhraho Peninsula. They are the shortest sapient spieces of Frasfu, which might be why their dominant culture gives special value to bravery.

Falid are humanoid mice that stand less than 50 cm tall. They have fur covering their whole body and a tail they use to stabilize their jumps. The hair growing on their heads is usually a bit longer than the rest of the body, and can sometimes grow as long as that of a jongyan or csillun.
Their fur mostly takes on dark tones, usually gray or brown. Black and orange fur is uncommon, and white is pretty rare. White falid are more frequent in snowy places so that it's easier for them to camouflage.

Falid come from the west of the Dhraho peninsula. They have a bloody history with their neighbors, the sadamir, as falid used to hunt sadamir as proof of their courage. For a long time the peninsula was divided in two: the Kingdom of Alalmoha in the northwest and the Kingdom of Dhuraifa in the southeast.
However, when the Empire of Yeoheung invaded their lands, they were forced to live under the same rule. The rulers of Yeoheung trusted in their enmity to keep them from rising up. But both falid and sadamir leaders realised that united they would have a better chance, and so they did and managed to fight Yeoheung off their lands.
Falid recovered their former country, Alalmoha, which is now part of the Triple Alliance together with Dhuraifa and Ahualco. They aren't currently engaged in any military conflict, but tensions with Yeoheung are still high.

Due to their small size, they are stereotypically considered spies and assassins, especially in Yeoheung. And while they indeed make great spies, their dominant culture favors bravery and courage rather than schemes and intrigue.
Sadamir is the other species they interact with the most. Falid coming from more backward places, such as small towns, often are suspicious of sadamir, and the other way around. But even in these cases they usually avoid open conflict unless there's another reason to do it. 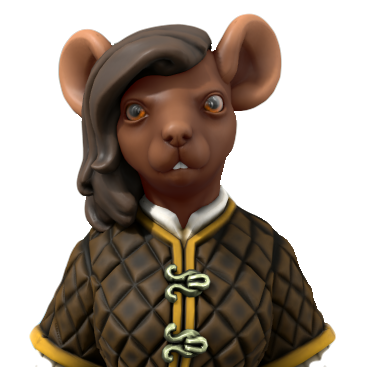 Finding accomodation as a "Big One" in a falid town can be difficult, but cities usually have buildings that work for both sizes. Double doors and tables with legs that can be lengthened are very common adaptations.
— From Min-aniara Laita's travel journal.