As seen in
Dominion of Darkness
Those seeking healing in Aubadeon need look no farther than the River Gleam. Fed by the Light's Spring, and edged by the golden trees, the Light has doubly blessed its waters with healing abilities. The water runs clear except during the gold season, with a taste that is almost as pure as that from the Light's Spring. It is home to a thriving ecosystem and inadvertently responsible for the golden oil used in worship.     The natural beauty of the golden trees, combined with the magical essence overflowing from the Draska pool, gives the Gleam healing powers when it glows. Those who are sick with chronic ailments often go to Springvale year-round so they can bathe in the water, hoping for healing even when it is not glowing. There have been reports of healings even outside of the gold season.   It is important to remember that the healing properties of the golden flow are topical. Goldsun dye is poison when consumed by humans, but it does not harm wildlife.

The River Gleam has its source high in the Aubadeon mountains. A thousand melting streams from the top of Sun's Font join and join again until the river meanders through the Draska forest. There it is fed by a tributary whose source is the Light's Spring at the heart of Draska territory. It wanders through the forest and joins with the Glimmer before making its way to the sea through the estuary at Springvale.   The channel of the river is shallow until it leaves the forest, making it ill suited to water travel by anything larger than a two-person craft. Once it joins with the Glimmer, it becomes deeper until it empties into the estuary, where the depth ranges from a few inches to a few feet, depending on the tide.

The estuary is home to many species of waterfowl and other native wildlife, providing a mixing place for salt and fresh water.   Sparkle trout migrate upstream in the fall and downstream in the spring, adding a sparkle effect to the gold season with their reflective scales as they go through the smolting process of adapting to life at sea.   The estuary is a tidal zone, with the yellow pollen from the trees leaving certain areas heavily dyed even outside of the gold season. The water near the ocean is brackish. During high tide, whales and other large sea mammals occasionally venture into the rich spaces of the estuary to hunt. The plankton that feeds the whales in this area has absorbed a high level of the goldsun dye, which appears to make them exceptionally tasty to whales. As a result, whales sometimes resist the tide to get one last bite and wind up beached.

Each spring, the golden trees along the route bloom with vibrant yellow flowers. The pollen from these blooms is used to create the goldsun dye that is prized throughout the land. Much of the overabundant pollen falls into the river, creating the gold season, when the river glows yellow as if the Light has embodied the water.

During the gold season, there have certainly been healings. Doctors often attribute this to the high mineral content of the water combined with the natural vitamin sources from the dye. However, all attempts to bottle the flowing dye and use it for healing outside of the river have failed. Skeptics claim the healings may more readily be attributed to fresh air after a long winter's isolation in cramped quarters.

In the fall, the sparkle trout migrate up the river to spawn under the trees in the cool, rich redds farther upstream. The scales of the sparkle are reflective, adding a shine to the river during this annual migration.   Whales often come quite close to shore during high tide, often finding themselves beached if they do not escape with the tide. A beached whale is a treasure to the locals who eagerly harvest the rich gold blubber. The dye colors the plankton that the whales eat, leaving the blubber a rich golden color that is prized for use in the oil lanterns of the reflects.

Before Aurora became cursed and abandoned, travel through the forest was more frequent, unlike the relatively seasonal migration from Kingstown to Springvale that we see now. Boats traveled from Springvale to the Gleam regularly. Caravans ran from Kingstown to the Gleam on a year-round basis, making routine stops in Aurora.   The deep woods south of the Gleam are thought to be haunted by the spirits of the Draska, although travelers would be wise to fear the bandits that live in the woods more than the spirits   The Gleam forms the boundary between King's Grange and Aurora Territory, though this boundary is mostly symbolic now, as the King owns both lands.   The magic of the Gleam comes from the Light's Spring at the heart of the ruins of the Draska town of Aurora. While purportedly peaceful, this people of wisdom and magic became warriors towards the end of their existence, helping to defend the Kingdom from the attacks of the Shadows. Only after their death did we learn that the Draska power was what drew the Shadows to attack our land. The Draska plague likely saved the kingdom from destruction.   Only a few Draska escaped the plague, and those have mostly been enslaved, tightly controlled to prevent them from drawing the attention of the Shadows to our land.

Those seeking the health benefits of the Gleam often camp along its winding banks so they can be close to the water when the golden flow happens. This glow will come intermittently for only a few days, and so the early spring pilgrimage to the Gleam is undertaken at the first sign of blooming in the lowlands. Doctors and others who care for the sick — or those who wish to prey upon them — also come along with the sick, creating a festive marketday atmosphere up and down the river. Once the flow is past, the area returns to its natural state.   While many claim that wading in the river is enough, the most miraculous healings have been reported by those who swim in the golden flow, allowing the dye to permeate their skin. This yellow tone, known as the Light's Kiss, wears off in about a month. Whether the effects of the healing extend beyond the month seems to vary from individual to individual. Many report lasting results.   Few travel up into the shallower area of the Gleam, leaving that area in its natural state. The faithful would be wise to avoid the ruins of Aurora.
Map of Aubadeon
Open full size 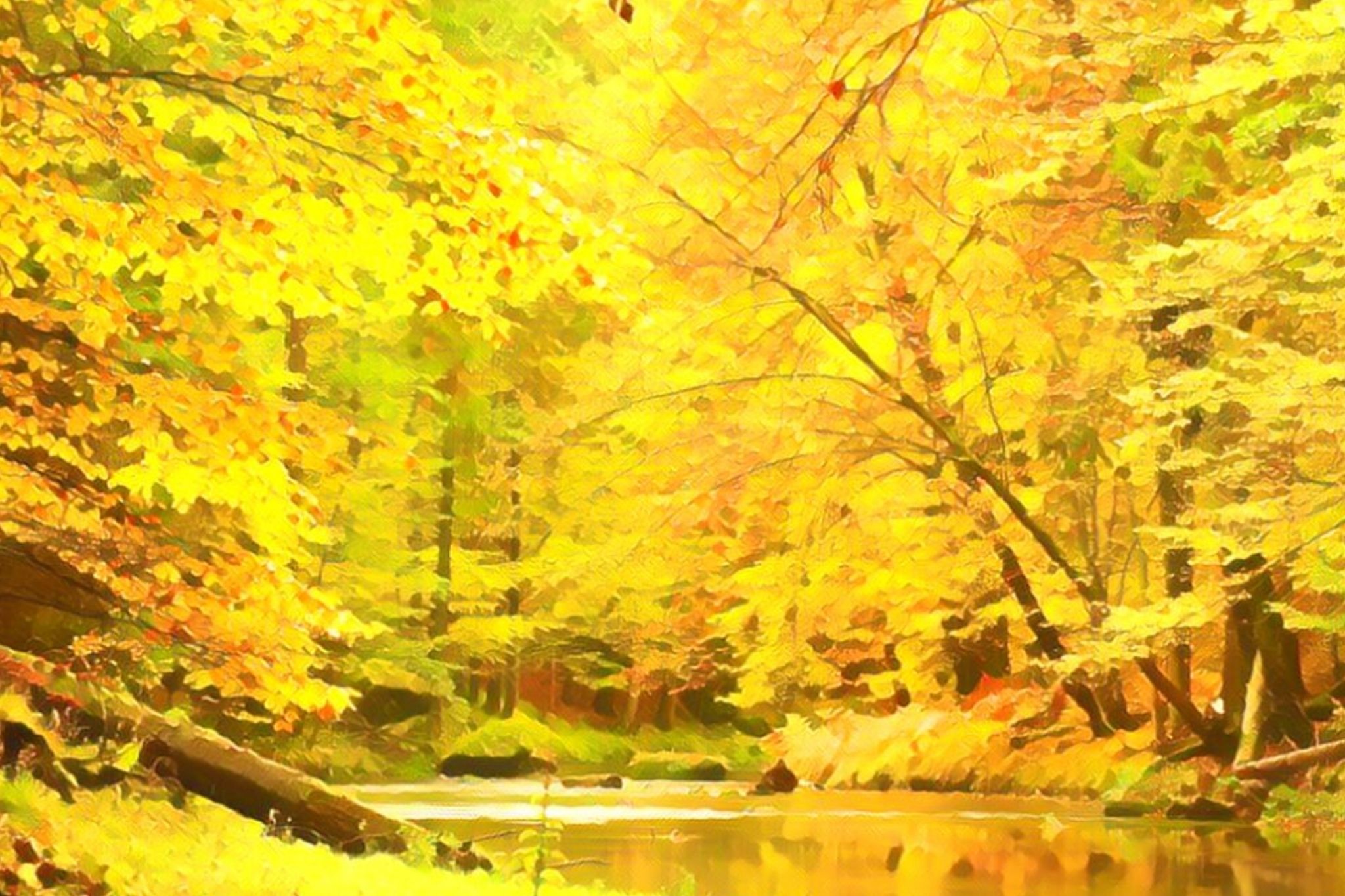 Nice read. Seeing the river during the gold season must be quite the sight to behold :)

Thanks! I had fun trying to find an image for it!

Thanks, Chicki! It's all about the sparkle around me!

Nice world-building! I'd love to visit during gold season!

Thanks, Becky! This platform is so much fun!

You seem to have thought of everything. Thinking about those bandits in the forest. :) Love the world-building.

Those bandits make appearances several times in the stories.

This is amazing and a bit mind-blowing. I don’t have the creativity or brain power to create a world like this, a place that only exists in one’s fictional mind.

Isn't that what we all do when writing, though? Even when it is based on our real world, there are wonderful twists and turns that we bring together to make it come alive for our readers. Thanks for reading, Becky!

A topical colour change due to resources - nice! Love that both healing and poisoning are possible (they are so very often linked aren't they?)

Yes, they are! Thanks for reading!

I like the css on the headings and title! Hmm what were the Draska up to?

Thanks! They're still around... they're the focus of the books.

I don't even like gold and you made this sound appealing. I did have to read the second sentence twice to understand the double blessing was from 1) the Light's Spring and 2) the golden trees, but that made more sense as I kept reading.

Thanks! I'll look at clearing that up when I can edit it again.

I am in love with the gold season & everything surrounding it!

Thanks! I can't wait to work it into the stories.