A disgusting species of fly that gives birth by projecting it's eggs.

Melior    Fauna    Invertebrates      Snotfly
The unusually named snotfly are named after their unique method of producing offspring. Rather than laying eggs carefully, the fly forcefully expulses a phlegm-covered egg so that it will land and stick to a surface, where it can then hatch and nourish itself upon the mucus.   It is not known if the fly technically sneezes out it's offspring, but it certainly looks that way.

Snotflies are larger than common house flies and are therefore much louder, too. They can be found in warmer climates of Melior and are most prevalant in Melopia, where they feed upon decaying organic matter of all kinds.   The disgusting nature of the flies have given it cultural associations with disease and poor hygeine, and many children use it as a common insult in their younger years.

Don't go calling your brother a snotfly just because he's got a runny nose.
That's mean and unfair!
— Parent scolding a child

Snotflies are vigilantly swatted and shooed out of houses, as their sticky eggs are incredibly difficult to clean even after they've hatched. When the disaster of The Rupture struck fifty years ago, many homes became infested with snotflies as there were not enough resources to care for all of the dead.
Even today, some houses still remain as a buzzing hive of filth - poorly boarded up to prevent even the homeless squatters from moving in with them.   This sudden population growth of the species has caused a huge global demand for extermination and cleaning services but unfortunately, many people cannot afford to hire professional help.
Folk hero, Katrin Aurus is leading a movement and banding together volunteers to help clean the worst-hit homes for free so that communities can heal and people can restore their lives.
Log in to World Anvil to view
bonus content and secrets! 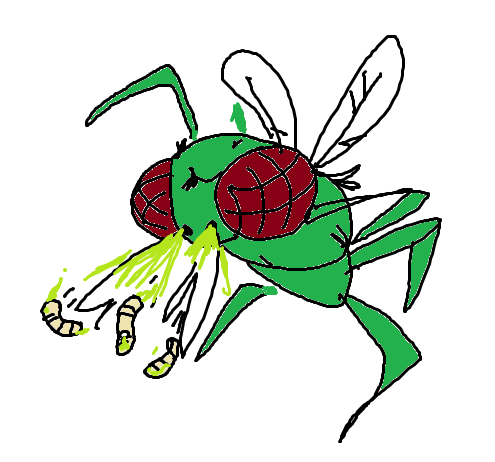 Thank you, I hate that visual and I feel like I need a wet wipe now.

Haha, gross! I find it humorous that it looks like they sneeze out their offspring. XD

Well... that mental image is gonna stick. Have a like.