The Nelqorana were wise and powerful, it is true. But empires long united, must divide. So it went with the First Nelqorana Empire, which can be said to have established the classical period in world history. While the southern continents reveled in barbarism, the holds of the elves the only civilized places in the world, the Nelqorana were establishing their control over their homeland and beginning the genesis of a vast colonial empire.

This golden period was interrupted by an isolationist sect within the Nelqorana. They desired to remain on their island and didn't want to expand beyond the Koraxkha Sea. Eventually, this isolationist sect became violent and began to destabilize Nelqora for a period of ten years. These ten years are called the Times of Trouble, and they are a dark period in the history of Nelqora.

The Times of Trouble ended with the Ciryatur Revisions, which brokered a peace agreement between the imperialists and isolationists. The Ciryatur Revisions also did away with the imperial government and created the Commonwealth: a parliamentary government which had indefinite power over the people, from whom it drew omnipotent rights. The royal house and throne became a representative of the state and had little actual power. With the death of Ciryatur, the parliament was overturned and imperial power was returned to the royal House of Jelum, a cadet branch of House Forn. 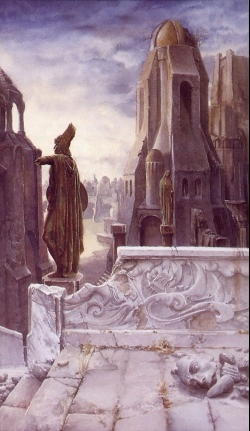