The greatest Man. From the House of Forn, Detheril sailed the treacherous waves of Boryen and then went upwards, towards the sky, and he beseeched the gods to aid the free people of the world in their desperate struggle against Gendûet.

The gods harkened his call, and they descended in their full might and wrath.

Through the drifts and ice sailed dreadful Detheril, proud Detheril, strong Detheril. He rode fair Telethril, long and white, with sloping mast and dipping prow; he rode quick Telethril, sturdy Telethril. And they shone together against the burning sky, white against red.

The Sun now rose upon the right. Out of the sea the Sun came hidden in mist. But dreadful Detheril stayed on his way, his hand above his eyes, and would not turn. The Sun rose and stood above the mast all coppery and red; it burned proud Detheril. And the white ice here and there, around and about, cracked and roared, growled and howled; and it blinded strong Detheril. The ice beat against Telethril and stabbed its hull. The ice grinded (how loud was that sound!) against the fair ship, fair flakes were shorn and lost in the dark, deep sea.

But sturdy Telethril did not fail, and strong Detheril with mighty cry called for the ice to break. With booming voice and fell words proud Detheril called the ice 'NOT' and thrust it beside. The ice fell away and broke into shards. It split with the noise of thunder. Like a storm cloud did the ice fall away, rumbling and shaking. Only with spry leap and quick cry, and with deft hands and keen eye, did mighty Detheril take fair Telethril through the watery paths; he tacked and braked, and only barely did he steer through!

But then a great shard of ice, long as a spear, came leaping from the right. And Detheril could not take the mast and turn away. Suddenly a fair breeze blew behind, and blessed Detheril darted beneath the ice. Crystals fell on him and Detheril cried out. But swift Telethril caught the wind and did not fail, and soon the mariner and his ship were out of the grinding ice, and on and on they went. Clinging to the mast, pious Detheril praised Vahan. He shed a hundred tears and sang an ancient song, "For God has saved me, as he will save us all!"

The Sun fell away and the grey-veiled Moon shone white and cold above fearful Detheril. And in silent seas he took fair Telethril forward. Detheril with wide-eyes, bright-eyes, head facing forward, sat on the dipping prow and sailed on like one enchanted. And he saw coming down from the moon, in leaping gait, two men, and about them was an elfish light that fell around them like hoary flakes. Rich in attire, in shining black and blue, with diamonds on their cuffs and rubies on their shoes, these men were not leaping as Detheril thought, but were riding on tall, fierce horses snorting frosty breaths and with manes like the leaping foam.

And enchanted Detheril saw the men separate as they touched the horizon, and one go left and one go right. He saw them dart and leave behind them a trail of stars. Then in a flash of light the men went away! And they left but one place dark, which was where they first landed, where they first came. And brave Detheril took the ropes that strung taught about the mast, and he called the wind by its name and told it, "There!" 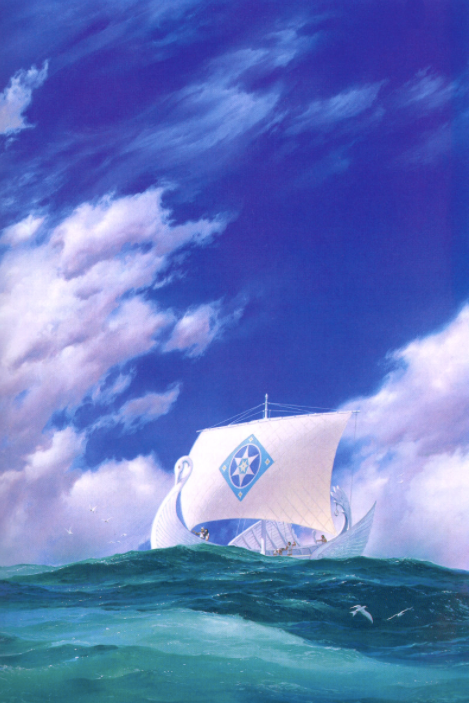