The Hummelverse    Trivia    Machines      Trucks
These vehicles have been around since the early days of advanced AI. But while other vehicle types became more sentient, the trucks didn't get the same treatment. They have very simple minds, but can hold on to any thought that crosses those very stubbornly. Sometimes, that makes them difficult to work with, but for the most part, they are quite docile.   Much more common than trains, and therefore a more easily accessible means of transporting cargo and hitching a ride. Also less angry. Often, tanks choose to travel by sitting on a truck-towed trailer.   Trucks can be bought in many places, though there are few factories that produce them. They simply get around a lot. Generally a truck doesn't seem to mind being bought by a new owner, though in some cases they have been known to get attached to their owners to the point of refusing to follow anyone else's orders.

Unarmed. Nowadays' models don't have any weapon logic in their cores - to prevent any sort of possible uprising. Those that were equipped with offensive systems were systematically killed. On dangerous missions, trucks are accompanied by tanks.

Generally no armour. This would be uneconomic - the fuel consumption from weight and material cost versus buying a new truck or just sending a tank instead wouldn't be viable. Armoured trucks used to exist, but their armour wouldn't be able to withstand a tank cannon.

They can talk like other vehicles, though their vocabulary and ability to express themselves is very limited. Imagine talking to a very smart dog! Other than for example tanks or ships, they don't choose names for themselves, but are given nicknames by their owners that they respond to. Similarly to trains, they are very simple-minded, if a little more adaptive. They need to be able to understand/memorize directions, keep track of their cargo, and deliver messages/instructions.

The general maintenance is inexpensive for trucks - when serious defects happen, they are simply put down. However, rubber for the tires can be a scarce good. Trucks carry spare tires for field repairs, but when those are used up and no makeshift solution can be arranged, a flat tire tends to be a truck's death sentence.
Rarity
Very common. Can be found in almost all clans and trading hubs. Teams that own trucks are very rare. 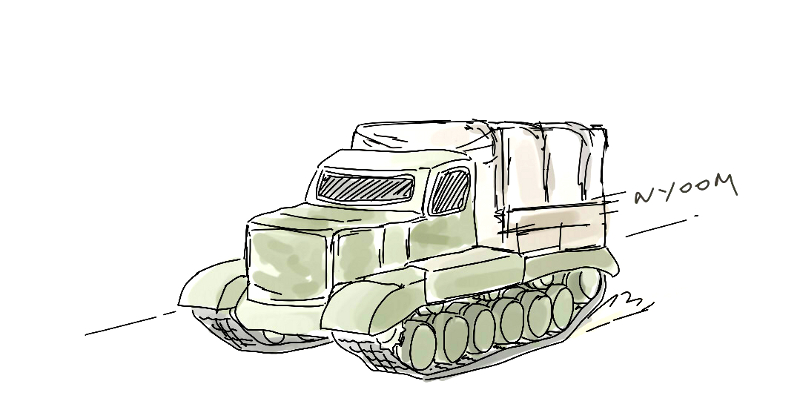 Trucks and Tanks
Occasionally, tanks like to "dress up" as trucks. This can be done because of attempts to disguise themselves (and rarely works), or just for fun.   Trucks and Cars
While cars are extinct, trucks are still around. Cars were hunted for sport, but the tanks found the trucks useful and therefore let them continue existing.
Machines

The Hummelverse and The Tanking League are my creation. All content - including art - on this page was created by me, unless otherwise stated.
Want to submit content like fanworks, ideas, characters? Please note that you are accepting these terms if you do.
Back to top
Cover image: by MrPanyGoff