The Hummelverse    Trivia    Machines      Wheeled Armored Vehicles
The term wheeled armored vehicle, also known as armored cars, describes a type of armored fighting vehicles that is of a similar appearance and function as tanks. A failure to adapt to and persist in a drastically reshaped world caused the large-scale disappearance of their kind while their tank cousins thrived.
They are equipped with weapons such as anti-tank cannons, often mounted inside a traversable turret. As the name already suggests, their hulls are armored to protect the internal components from incoming fire. The major feature that distinguishes them from tanks is that unlike them, wheeled armored vehicles don't move on caterpillar tracks; instead, their running gear is outfitted with rubber tyres which can be steered and allow high top speeds, as well as quick turns that improve maneuverability on suitable ground. On difficult terrain, on the other hand, their mobility is inferior to that of tracked vehicles and they struggle more with scaling obstacles.

Within the boundaries of the Known World, armored cars were long thought extinct. Their existential niche vanished when a new world order established itself - there was no place for fighting vehicles of this type in the emerging hierarchy of needs and supply, which was dominated by tanks.   Compromises in armor thickness and weapon complexity that reduce overall weight and allow for swift movement - which is still highly a desirable trait for tanks - are viable choices even in the present day. However, as infrastructure has degraded, affecting the usefulness of roads and the availability of rubber as a material, rubber tyre wheels have become a drastically less popular choice for vehicles. Tanks are of the opinion that rubber should be primarily used to cover the production of tank parts that require it, with tyres such as those used for planes' landing gear or trucks' wheels being of a lower priority and their production only considered when the material needs of tanks are already met.   With the fact that wheeled fighting vehicles are less capable off-road and their tyres presenting an easy target and a big maintenance obligation, they are no longer considered useful in the typical environments of the known world. As such, they suffered the same fate as any other type of vehicle that lost its usefulness.

It wasn't until recently that word of mouth spread about what started as little more than a myth: Travellers tell of unpleasant incidents involving "feral vehicles" that attacked them and robbed them of their belongings or even their companions. These encounters all have in common that they are described as happening only in densely populated areas such as large trading hubs, and that the attackers were able to move extremely fast, as well as quietly, compared to regular tanks.   Accounts of attacks like these may sound cryptic to the average machine, and could be dismissed as urban legends - exaggerated memories of frightened victims of what was in no way different from an everyday instance of being ambushed by highwaymen. The similarity to the narratives associated with MBT encounters might suggest a possible alternative explanation. However, there are key elements recurring in the reports of these particular attacks that would hint at something else being behind them.   The vehicles carrying out the ambushes are regularly described as having "unusual features". But this doesn't refer to features typically ascribed to MBTs, such as their prominent turret shape. Rather, the reports go out of their way to mention the overall dimensions of the mysterious vehicles being mostly the same as those of common light tank models, but lacking tracks and sporting large rubber wheels instead.

To the residents of aforementioned areas, there's no mystery or doubt surrounding the existence or even identity of these attackers. Inhabitants or regular visitors of agglomerations like the exceedingly crowded harbor town Oresund are trivially familiar with their former kin and their fate. They describe it as an effect of poverty in places that re-invented the concept of wealth: Tanks that were attracted by the perceived promises of a "more civilized" lifestyle became trapped below the shiny surface and had to change to survive there.   In those urban environments that are dominated by an abundance of paved roads and stolen trade goods, the specific advantages of choosing the shape of wheeled armored vehicles soon saw a renaissance that was born from a desperate race for adaption. 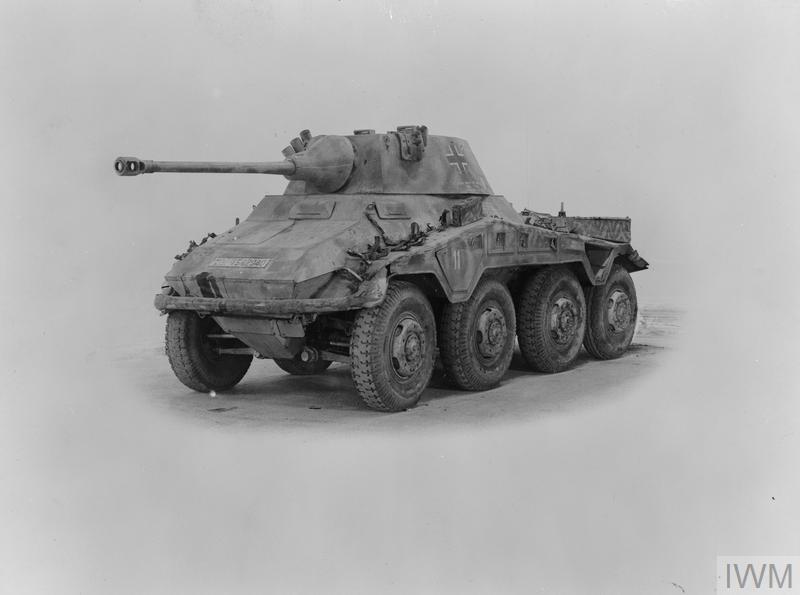 by Imperial War Museum (Public Domain)
Related Ethnicities
Endemism
Found exclusively in overcrowded high-population areas, but inside those all across the known world.   Unpleasant...
As a direct result of the circumstances of their re-appearance and overwhelmingly criminal activities, contemporary armored cars are considered vermin by those aware of their existence. A shady caste of outcasts dwelling the darkest corners of a society whose cracks they fell through, their encounters with tanks are seldom benign. Little is known about their way of life apart from their tendency to form unstable pack-like groups to assault anyone who ventures too far from the main streets.   Tanks commonly refer to these vehicles as "dregs", and some claim that the armored cars use this name for themselves as well.   ...And Unwanted
Even despite the well-known origins of the dregs, and despite the fact that this origin is generally perceived as tragic and not really something they had any fault in, the tanks would rather see them vanish once again. As a whole, they are an uncomfortable reminder for - and symptom of - a society that failed them.   Disposing of them, much to the even greater discomfort of the other vehicles, is however not exactly possible. Due to the nature of their emergence, any dreg that is killed in an attempt to "clean up" the urban areas only results in the surviving ones coming up with more specialized ways to avoid dying in the same or similar ways.   With even small-scale efforts showing little success, there haven't been any coordinated initiatives to actually get rid of the dregs. Most machines concerning themselves with the topic are content ranting about them; the rare call for action is followed through seldomly.
Machines

The Hummelverse and The Tanking League are my creation. All content - including art - on this page was created by me, unless otherwise stated.
Want to submit content like fanworks, ideas, characters? Please note that you are accepting these terms if you do.
Back to top
Article template
Species
World
The Hummelverse
Category
Machines in Trivia
Author
arty
Publication Date
2 Dec, 2021
Creation Date
2 Dec, 2021
Last Update Date
2 Dec, 2021
Visibility
Public
Views
118
Favorites
9
Comments
4
Work In Progress
Tags
vehicle

"OPEN YOUR HATCHES, SHEEPS! THE WHEELED BODYSNATCHERS ARE AFTER YOUR TRACK PADDING!"   I love this. Great work!

Oh dear, wheeled bodysnatchers :DD I'm glad you enjoyed the article, it was really fun to write and I feel like it fits very nicely into the setting. Feels like something was glaringly missing there, so I'm glad I found the piece.   As a fun fact, the idea started with the completely unrelated question of where a plane from the upper north would fly to go shopping lol.

Very cool! It's awesome to see even more sentient vehicles roaming about. :D

I'm always excited to explore the different types of sapient vehicles and their possible dynamics and unique attributes in relation to each other :D

Aw I feel kind of sorry for them. No wonder they've turned to a life of crime. :(

That awkward moment when living in a supposedly civilized area ends up being worse than living in the no-man's-land where everyone would be actively out to kill you at all times.