Small and nimble, tank-like vehicles. This type actually encompasses a wide range of vehicles that are however all commonly referred to by the same name - Goliath. The name originates from a single model that was used by humans in the past, but has become a descriptor for the entire type of modern mobile mines.

A Goliath's purpose in life is simple - seek and destroy. While their ancestors were remote-controlled, the modern counterpart is sentient and fully autonomous. They are not built in factories, but instead assembled in workshops, using spare parts and a very rudimentary faux-AI. The "source" for this type of AI is widely available and usually installed in old, wiped AI Cores.

Lacking a will of their own, Goliaths without orders just act in a seemingly random manner. Most of the time, this means that they simply nap to conserve energy, but sometimes they can be seen zipping around. This includes driving underneath other vehicles, which tends to give frights to their allies.   They know friend from foe when explicitly told and can follow simple orders. When told to destroy a target, they are capable of being sneaky, but can also simply approach it as quickly as possible.   Once they reach a target vehicle, they will try to get either under or behind it and trigger their explosive charge. This causes the Goliath to blow up and damage whatever is nearby severely. Effectively, this also kills the Goliath, making them single use.

Some Goliaths live longer than their peers by being used for scouting operations instead, which they are quite suitable for; their small size and relatively silent movement makes them hard to detect.   Sometimes, vehicles get sentimentally attached to their Goliaths. While generally, they are not seen as capable of thought or emotion, some will insist that "their" Goliath has a personality and keep them around as pets. In other cases, vehicles simply feel qualms about treating them as a disposable weapon.

Typically, Goliaths are powered by electrical motors. Their long-lasting batteries are charged by hooking them up to another vehicle's engine or an electrical outlet. They move about on caterpillar tracks, which allows them to traverse all sorts of terrain - though their small ground clearance means they get stuck often.

The main offence of a Goliath is their explosive charge. This charge is installed in their body and can be detonated at will. The power of the detonation can vary. Depending on the size of the model, the explosives loaded amount to between 100 kg and 350 kg. The heavier models are capable of destroying even large tanks easily. Other uses are blowing up strategic points of interest like buildings or bridges.

The armour on Goliaths is not designed to withstand enemy fire, and assembled in a way that doesn't impede the force of the explosives - at detonation, its seams burst with nearly no resistance.

Goliaths cannot express themselves in the way other vehicles can - they lack voiceboxes. Instead, they communicate via radio, in a simple, nonverbal language. This language can be a very simplified English, for example, or other languages depending on the vehicle's origin.

Like their tank cousins, these vehicles have optics and audio receptors to perceive their surroundings; they however lack a sense of smell.
Rarity
Uncommon
Length
1.60 m
Height
1 m
Weight
480 kg
Speed
20 kph
Radio Range
~ 1,500 m
Several different models with distinct specifications exist - the above data is an example of a typical, average Goliath. 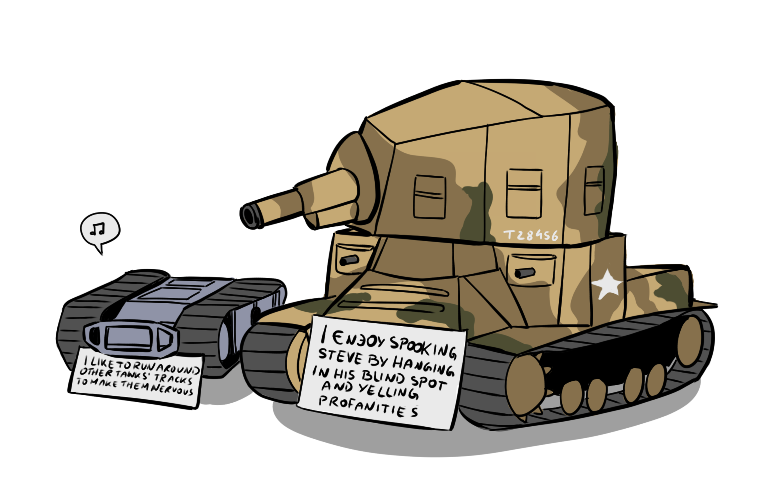 Answering: "Describe the functions of a vehicle used for military practices or conflicts."
Visit arty's Competition Page Check all other answers to this prompt Competition Homepage

The Hummelverse and The Tanking League are my creation. All content - including art - on this page was created by me, unless otherwise stated.
Want to submit content like fanworks, ideas, characters? Please note that you are accepting these terms if you do.
Article template
Vehicle
World
The Hummelverse
Category
Machines in Trivia
Author
arty
Publication Date
1 Jul, 2019
Creation Date
1 Jul, 2019
Last Update Date
1 Jul, 2019
Visibility
Public
Views
427
Favorites
9
Comments
2
Work In Progress
Tags
machines

I'm always entertained and grin from ear to ear with your artwork.   Makes me feel like a kid again and I LOVE that.   More please.

Alright. I take a dozen. Where do I sign?