They have no god but war. They have no love but for the sound of screams. They no feelings but for hunger and hate. They have no enemies only offerings to sacrifice in their damned pogroms. They have nothing to offer this world but teeth... and promises written in blood.
— Rias Timblewick

No single word has ever so thoroughly encompassed the entirety of a race as ravenous does for the Sahuagin. They are a scourge from some distant and unknown shore brought here by the bitter desperation of The Autumn Queen to be a weapon. One she thought she could discard as soon as the war was won by the fae yet the fae did not win. The weapon was never sheathed and blood never stopped being spilled. Such is the nature of war. And, just like with any other weapon the Sahuagin cannot be reasoned with, parlayed or forced into peace. Just like a weapon they have no grand endgame, no pity, no remorse. There is no greater purpose to their existence. They are meant to kill and to feed. And by that standard they are perhaps the finest weapon ever forged.

What little is known of the Sahuagin comes from the records of the Fae and their intended target... the Gnomes.

Surviving records from the fae's Shadow Court say their Queen cast her sight beyond the lands of Tairos to other, unknown continents. She searched for something, anything, she could use against the gnomes whom she hated beyond any other race. For it was the gnomes that spoiled her guise as Tairos' savior. Even from the very beginning when all the other races embraced the coming of the fae it was the gnomes that spoke out. She wanted their entire race punished, wiped out to the last but she lacked the soldiers needed to accomplish such a feat. In her travels through The Gates to other worlds she often found the oceans filled with so much life but here she found them barren along with island chains picked clean of intelligent life.

The source was the Sahuagin. A race of highly evolved, aquatic killers that lived as rapacious shoals swarming from one region to the next. They were attracted by life and driven by primal urges that were seen more as holy dictates than biological imperatives. The Sahuagin were obsessed with their own perfection and to them perfection could only be measured in martial prowess. They formed great legions that would clash not just with any intelligence they encountered but even with other groups of their kind. They were learn from their victims, developing new tactics, new weapons, new adaptations. Victory in battle was the church they prayed to, weakness the only sin and The Hunger their god.

They believed their hunger was some kind of cultural zeitgeist or a singular soul they all shared. In the infancy of their race they saw it as the force that pushed them to consume larger and more dangerous meals. In their modern society they see it as the source of a sort of manifest destiny, that which drives them to devour the world.

Tairos only knows the Sahaugin because of the actions of the Autumn Queen. Many believe she reached out to them and forged some kind of dark pact but this couldn't be further from the truth. The Sahaugin cannot be reasoned with nor a pact negotiated. Not even the guile of the Queen could charm or coerce these creatures. She tried to contact them many times. Messengers she sent were killed and devoured no matter their attempts at diplomacy or gifts offered. They could not be broken into submission by battle for any warrior the fae sent no matter how skilled would fail in the face of the endless swarm. Ploys to enslave them through sorcery were rebuked by primitive, yet overwhelming blood magic and the force of will that is their collective hunger. She became obsessed with having them though. The more she learned of their relentless urges the more she desired to see the set loose on the Gnomes. Her servants say she may have peered too deeply into the hunger while searching for a solution. They say it changed her, pushed her closer to the eventual breaking point that would lead to The Queen's Rebuke.

The solution she found while connecting with the Sahaugin hunger was a simple, elegant and utterly reckless one. Rather than try to win them over or conquer them she simply showed them a single image. The Gates of Tairos. The hunger worked out very quickly what they were, what they meant. They were the passage to a sea of endless slaughter and equally endless perfection. They could swim from realm to realm, world to world. Consuming. Adapting. Reveling in war. Feeding for all eternity. This vision cost the gnomes everything had they not blunted the advance of the Sahaugin at the cost of their lived the vision could have been the doom of untold worlds beyond Tairos.

Today, the Sahaugin lurk off the coast of the old Gnome Empire where they savage the Goblin and Kobold communities that dwell there now. This offers them no sense of satisfaction though. These diminutive races are numerous but neither filling nor challenging. They plot and scheme, working out ways spill over over the mainland and reach a functional gate. In the meantime they breed to replace the losses the Gnomes caused and while giving themselves over to their hunger so that when the time comes to swim into the stars they do so with only the sharpest teeth. 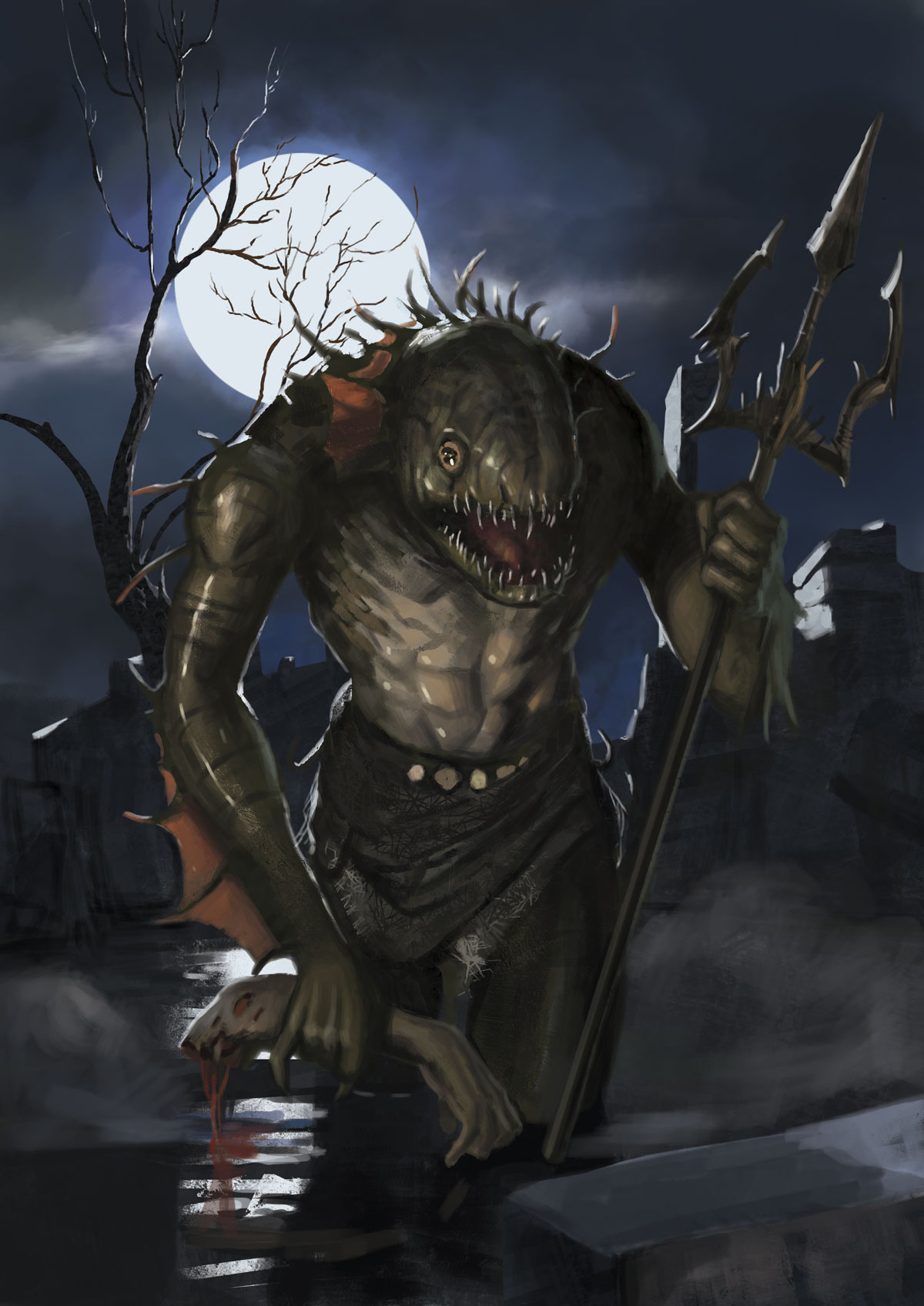 Aquatic species capable of breathing both air and water. Their bodies possess one or two sets of powerful arms and one set of legs. They are very well adapted for aquatic combat and movement. Their most noticeable feature is a wide mouth filled rows of jagged teeth.

Sahaugin are very quick to mature thanks to their forced racial perfecting. The typical member of their species is lethal within six months of birth and considered fully mature within eighteen months several rapid molting periods.


Most Sahaugin are quadrupedal for the majority of their lives. However, it seems that as they age and as they consume more and more dangerous food sources they will eventually grow a second set of dangerous arms. These are considered one of the marks of perfect and a change that all Sahaugin strive to trigger.

Sahaugin prefer deeper water and darkness for their living conditions. They like the cold water found there as they find it soothing. Warmer waters seem to encourage the desires of their hunger.

Meat. Sahaugin feed at an almost constant rate if allowed. A rare few have been observed overeating to the point of death. This is considered a great weakness by their kind. They prefer the meat of sentient species as the hunt to capture such meat is generally more challenging and pushes them to be more efficient killers.

The hierarchy of the Sahuagin is one based on two factors: physical might and one's ability to hear the hunger.

The oils from Sahuagin skin are very effective at warding off other aquatic predators and masking one's presence from the Sahuagin themselves.

In Tairos they live exclusively in a region known as the Blood-Dimmed Tides off the coast of what used to be the Gnomish Empire. It's unknown were other shoals of Sahaugin may exist beyond Tairos' shores.

Excellent sense of smell. Sahaugin are extremely well adapted at smell blood, pheromones and bodily fluids. They also possess a very acute dark vision that is suited for nocturnal and deep sea hunting

Sahuagin names are harsh, guttural and difficult for non-Sahuagin to pronounce. They believe their names are the names of the soul fragment of the hunger they carry inside themselves. Names are not given until until the Sahuagin takes the life another of his kind or a prey item more powerful than himself. If his first sentient kill is another Sahuagin than he takes the name of that one. If his first kill was an unnamed Sahuagin or a powerful non-Sahuagin than it is up to one of the hunger-speakers to choose a name.

Hunger-Speakers: These are Sahuagin that have tapped into the collective hunger on a deeper level. They're able to hear it and follow its urging to new challenges and feeding grounds. Hunger-Speakers are just as competitive and bloodthirsty with each other as with the rest of their race. Most shoals only have a handful of Hunger-Speakers as they very likely to seek each other out and duel to prove their perfection. They can also be the target of non-speakers as well. In most cases, if a non-speaker kills and consumes a Hunger-Speaker they too will eventually develop a connection with the collective hunger.

Sahuagin see virtually no difference between the genders and both are expected to pursue the same tenets of perfection.

There is no courtship within Sahuagin communities. Females will lay eggs in the shoal's community gathering area and males will fertilize the entire communal egg clutch. The unfertilized eggs have very difficult membranes to penetrate and the semen of the males is especially competitive. Only the strongest genetic material survives this prenatal battleground

The Sahuagin speak their own language and have extreme difficulty with the words of most other species because of the way their throats and voice boxes have formed. When they do speak they in the language of another species they generally do so in as few words as possible. Their voices are very sharp hisses, whispers and accented by the gnashing of their teeth

Sahuagin wear only what they need to carry weapons and meat. This is usually a few belts, pouches and such made of skin that's been bleached in the sunlight on the surface of their waters or boiled near geothermal vents

Choosing to ignore the hunger. Being defeated by a weaker enemy. Dying from overeating.

Everything is food. Some food is more cherished than others because of the challenge offered in acquiring it.
Origin/Ancestry
Terrestrial
Lifespan
Unknown. Many speculate there is no upper age limit to the Sahaugin and that unless they meet their end in combat they will continue to grow and adapt
Average Height
7' to 9' feet
Average Weight
450lbs to 600 lbs depending on size and adaptation
Body Tint, Colouring and Marking
There isn't much variation in their appearance. They all have some type of dark greenish scale with splotchy markings on their body that range from deep brown to black
Races