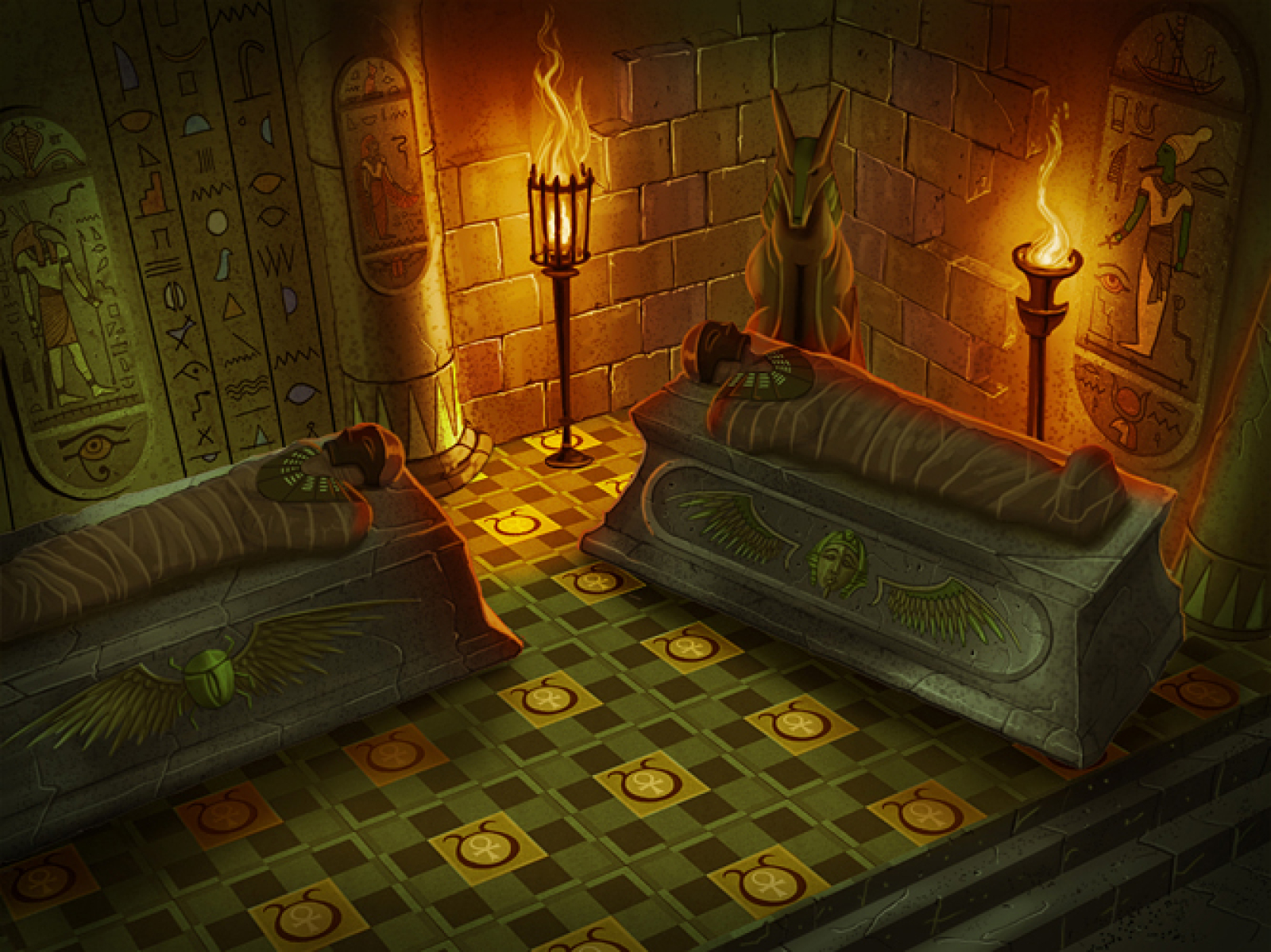 They say a Skyriran mummy in good condition can make you very very rich if you find the right buyer in Baradrad. Trouble is, I've never met anyone that got rich of one. I have heard plenty of stories 'bout folks that tried. None of those stories end well.
— Hensil Goldmeadow, Halfling adventurer


The promise at the core of Skyriran culture is that of the resurrection and eternal life. This promise was to be realized through a process of ritual mummification known as Entombment. The goal of Entombment was to preserve the body of the deceased until such a time as new life could be breathed into it.

This radical form of life extension was universally sought after by wealth and influential members of Skyrir's society. Many of these individuals would even seek Entombment prior to succumbing to incurable illness, old age or injury. Servants and slaves were often granted Entombment as a reward for their service or to ensure their duty would carry on permanently.

Entombment was carried out by one of several potential experts. Often, the priests of the old Skyriran gods would be called on to perform the ritual. Other times skilled physicians and alchemists were used. The truly wealthy had their own house alchemists whom they trusted with their final Entombment. Rivals would often find ways to sour each other's Entombment, ensuring permanent, final death. Thus, finding a trustworthy source to perform the task was vital.

The process itself would vary according to the traditions of the Entomber and the wishes of those being Entombed. However, certain steps were common in all processes. First, special elixirs and tinctures meant to strength the soul and bind it to the body are prepared and then fed to the corpse (or living recipient if that happens to be the case). These magical concoctions are said to be extremely potent necromantic agents who's variant recipes have found their way into creation process of many dangerous undead creatures. If the recipient is still living another potion will be administered to put them into a deep, numb, slumber. Then, the body is opened and most of its organs are removed. The heart is kept and preserved via a special brine; then sealed in a bronze urn. The empty body is dried out with a series of different salts and then resealed with herbs and covered in necromantic balms that infuse the corpse with energies meant to preserve it against the ravages of time and make it receptive to life force infusions in the future. Once complete, the corpse is wrapped in linen bandages and placed in a secure stone sarcophagus. This will be its home until such a time as death can be dispelled and the body thrust into its new eternal life.

To date, the promise of a perfect resurrection has not yet be realized. Instead, there are tales of these preserved corpses stumbling back into the world of the living as semi-sentient undead. Mummies. Territorial and vengeful creatures that lurk in the tombs eager to rip and rend apart those that would dare enter. In recent times more and more of the Entombed are stirring. Rumors even say that some of the old nobility, high priests and kings are awakening. They are denied perfect resurrection and instead find themselves trapped in their desiccated bodies and adrift in a land that has long forgotten their majesty. Sages in Baradrad believe this all has to do with the now tainted Leylines that are spilling necromantic energy into Tairos. The corpses of the Entombed are ripe for infusion with this sudden influx of death magic. There is no telling how many more Entombed may be sleeping beneath the sands of the Scorch Lands and how large the potential for disaster truly is.

Entombment began during the early formation of the Skyriran Empire. The process was born via the experimentation of desert witch doctors, primitive physicians and oracles to the old gods.

Methods vary from tradition to tradition but all involve the preservation of the heart, removal of all other organs and the drying out of the body.

Family often attends the early part of the ritual prior to the more gristly procedures beginning. Trusted allies, paid soldiers and such are also present for the Entombment of the wealthy to ensure their rivals do not tamper with the process.