Gavin is very tall for an average Paxian man but far too gaunt next to the average male Ma'ab. His face is also an unfortunate blend of the less attractive traits on both sides of his heritage, with large eyes, ears, a prominent nose, thin lips, and sharp, pointed chin. Nearly every person he has met has conveyed in some way, blatantly or passively, that he is ugly, scarecrow-like, and even repulsive.

His straight black hair is usually uncut and unkempt, appearing stringy. His skin is paler than a Paxian but not the ghost-white of the Ma'ab. However, his eyes are distinctly Ma'ab – deep-set and with black irises impossible to distinguish from the pupil – and, thus, he is recognized as such by those who have seen a member of the Northern Empire.

Gavin is assumed to be the result of the rape of a "good Manalari woman" by a Ma'ab soldier, a nameless bastard taken in by a celibate brotherhood. Neither he nor his father ever corrected the assumption.

Gavin exhibited a bright mind and strong thirst for knowledge at three years of age, becoming as literate as some of the adults by age six. Possessing an extraordinary retention of words spoken or read, Gavin could recite and copy scripts from memory, a talent very pleasing to the Archimandrite Petris, who gave him opportunity to prove his limits.

By virtue of the youth's persistence, hungrily studying when not working, Gavin would become extremely well-educated for his culture despite his Ma'ab heritage. By extrapolating observations, his insights also improved on stagnant techniques in their rudimentary agriculture and medicine.

Despite his benefit to the Brotherhood in ample ways, however, the marks in Gavin's favor were canceled out by the screaming nightmares and unpredictable seizures which claimed him beyond his control. Despite his intelligence, he was given all the menial labors at the monastery, never invited to travel on pilgrimage, and always bidden to hide whenever a visitor arrived.

Gavin knew from a young age he would never rise higher in the ranks of the church, for he was considered too unclean through his mother for the holier rituals and services, even if he did not habitually collapse and thrash like a demon had possessed him. All that he knew of his mother were hateful rants and insults about the Ma'ab "witch" that once lived among the monks of the monastery.

She was discovered stealing their water and imprisoned until she became penitent. The story most often repeated was that she had already been pregnant when she came to them and died giving birth to her fatherless son, yet Archimandrite Petris once let slip the timing of her arrival and the year of Gavin's birth after the boy had learned arithmetic.

"How long does a baby take to be born to the Manalari, Archimandrite?"

"Fascinating. The Ma'ab witch must have carried me for four years, then."

Such dry remarks, prodding old secrets, earned the same punishment for his "possessions" which spread devilish terror among the faithful, as lash scars slowly built up on his young back.

Puberty was not kind to Gavin. His bones always ached from growth spurts; he could never eat his fill and was punished for "stealing" food he had helped to grow. Recovering from seizures was made lengthy and difficult from the deliberate injuries landed upon him at the same time in the attempts of his "brothers" to beat the devil out of him.

He also never stopped seeing the dead, whether awake or asleep, and their presence shifted between morbidly banal, enlightening, and flat-out terrifying. Any protection from the more malevolent spirits - for the monastery had more than the living would ever admit - arose from Gavin's own desperate discoveries in seeking some sort of quiet or rest.

The Quiet struck him like a blow the first time he found the courage to enter a grey mist recurring in his sleep. There, he heard a whisper. Gavin was certain she was not his Ma'ab mother, though he'd searched for her grave before, unmarked somewhere in the forest around Chirtu.

That first moment of quiet would not last, for even the mysterious Lady could be intense and frightening to a young mortal. Gavin never spoke of her while awake, though he must have muttered the new language learned in his sleep, and someone had overheard. The following exorcism was swift and brutal.

You must leave this place or join the drifting dead.

"I will, my Lady. But they shall have no peace in reward for finally being rid of me."

Gavin wandered for two years, traveled for the first time. Not always knowing where his next meal came from, he joined temporary groups who stole what they needed. Meanwhile the dreams and encounters with spirits continued, leading him evermore West and, eventually, to another death mage, the first he'd met in his young life. Gavin knocked on the door of Sarilis, an old man who'd also become an unrepentant murderer, now settled in a remote mountain fortress once built by Dwarves.

"The villagers in town speak of you. I believed I recognized stories about a mage specializing in death."

"Hmmm, interesting, and what an interesting aura you have. I see you have a mare already, and I have a sturdy cart. These old bones struggle with each winter up here. I have much I could teach an apprentice if you and the horse can pull your own weight."

In his view, Gavin had never done anything else, and the connection to his Lady seemed stronger here, somehow.

Patreon exclusive content: Added secrets or insights about the Character. May include adult themes. 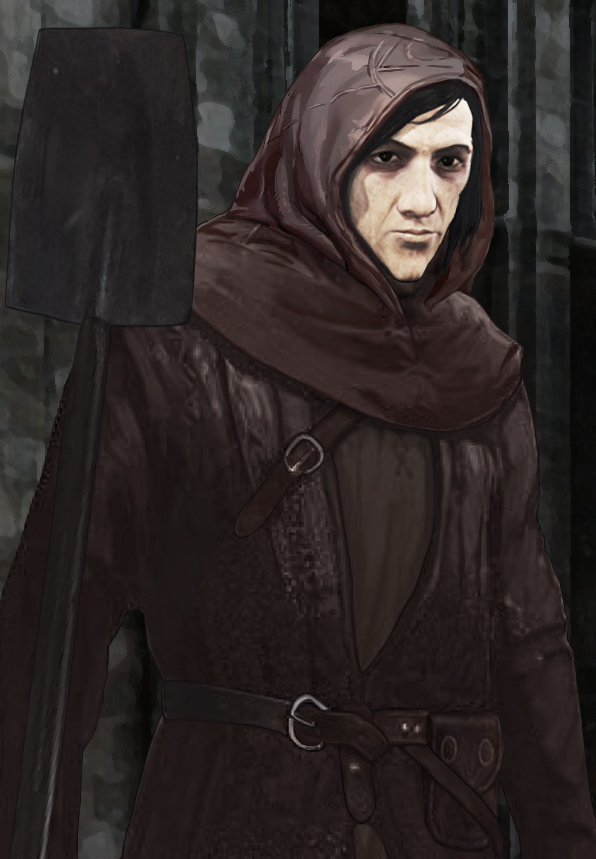