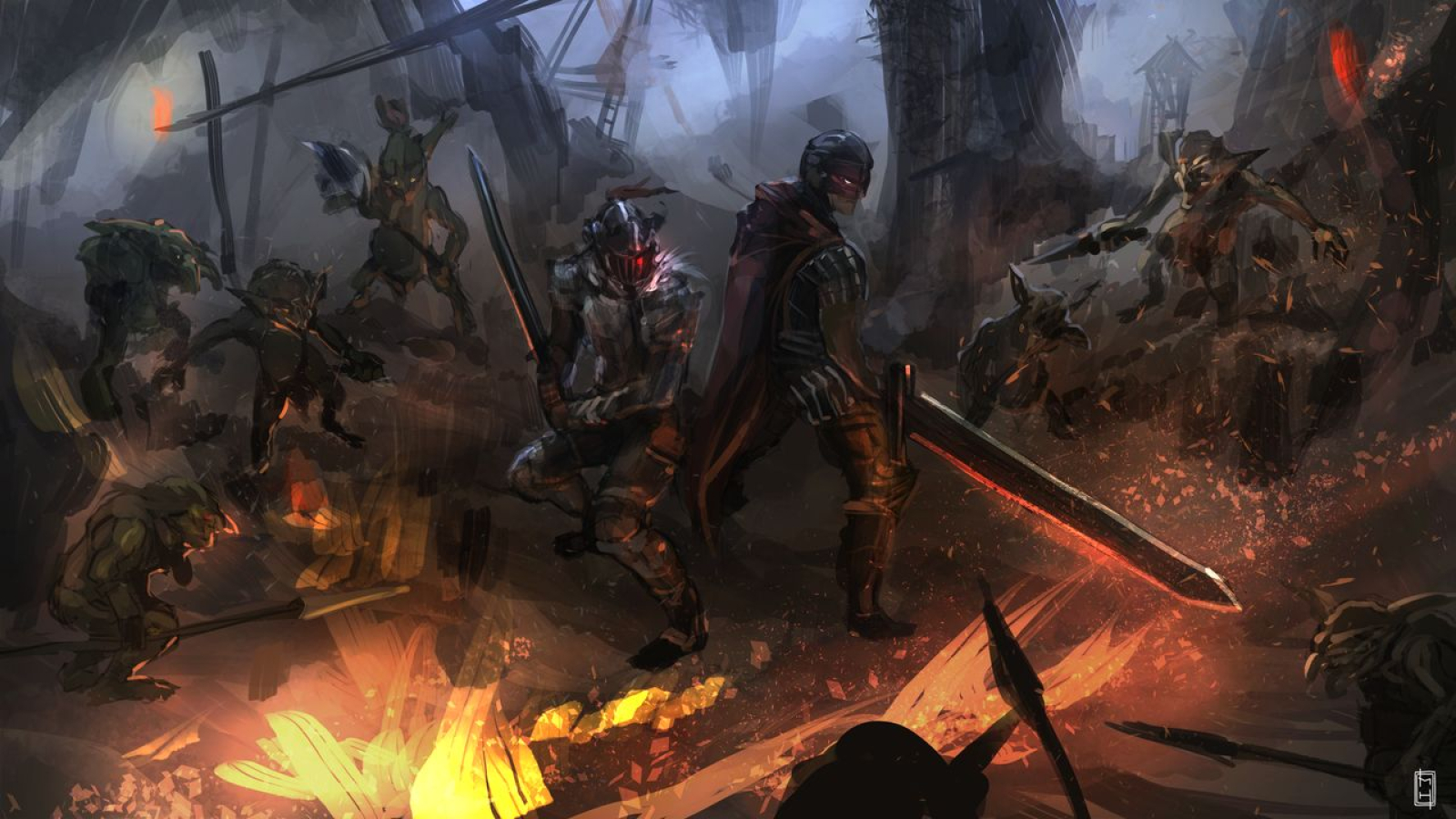 Goblins are highly intelligent creatures when not bound to a Brood King. They have a complex language that is impossible to comprehend for other races and their culture is one dedicated to scientific inquiry. They often consider themselves a foster race, adopting races that could be considered their cousins into the fold. The Goblins are the sole reason why the verdant races are not killed on sight in civilization. Orcs and goblins often walk the streets just as much as Humans and elves .

Many believe that the verdant races began with the goblins sometime around the height of the Alfen Ancestors. The prevailing theory is that goblins were a failed experiment leading up to the successful genetic manipulation creating the The Hive Elves. The most profound evidence in favor of this theory comes from the fact that, even though goblins reproduce through spores, goblins have five distinct forms of biological sex.

Goblins are usually short in stature ranging anywhere from two and a half to five feet in height. They have sharp serrated teeth and skin ranging from a pale yellow to a deep green. They possess 4 sets of vocal cords that they used to speak their impossibly complex language, and every Goblin possesses a photographic memory, a byproduct of their origins.

Goblins were created to function in a hive mind. The hive mind centers around a brood King for every colony. Any one colony can be radically different from another depending on how the brood King wishes to develop and mutate their own spores. This leads to the variation in lifespan between different broods of goblin as well as radically different physical characteristics. The broods with superior numbers are known for short life spans ranging anywhere from 10 to 30 years. Some last considerably longer, but goblins will rarely reach fifty years of age, at most.

It is a common stereotype that goblins are unintelligent. The stereotype stems from the differences between bound goblin broods and Unbound Goblin Broods. A bound Goblin brood still lies under the control of a brood king. When a brood King dies the entire brood becomes unbound, each and every one of its number is released and given free will. They immediately go about experimenting with the world around them.

Every Goblin possesses photographic memory and profound curiosity, allowing them to pass on memories and skills as well as personal traits to later generations. After approximately four generations, an unbound brood becomes incredibly intelligent and sophisticated. Their weaponry is often considered some of the greatest examples of craftsmanship in the world, and their various contraptions they invent rival even the greatest marvels of science and technology that stem from Lartasia .

This is how goblins lived for a considerable period of time. A brood king would die, unbinding The Brood, and the brood would experiment and learn how the world works. They would pass on what they learn to to the next-generation, and the process would continue. However, new brood Kings can often be born out of subsequent broods, and if they are able to survive, they will combine the minds of all goblins in their brood that share the same genetic line. Other brood Kings can come and take over unbound broods, combining the genetic lines into a new brood. This is the primary reason why goblins never became a civilization.

Kings can appear at any given point in time within a generation. Once they establish a connection with the brood, all their progress is lost. When a goblin brood becomes unbound once more, almost all the information they once had will be gone. One piece of information will remain. They will know what it was like to live on both sides of the coin. As the brood kings died once more, and unbound broods resurfaced, the Goblins were left with a single goal: ensure it never happens again.

The goblins paid close attention to each new generation, killing indiscriminately should a member of the brood exhibit qualities even remotely similar to a brood king. This would not protect them from brood kings that sought to annex their brood. They then stumbled upon the trolls. Trolls are large and remarkably unintelligent, likely the product of a brood king seeking to create the biggest and most powerful brood. Trolls possess no brain and come in a variety of shapes and sizes but they could prove useful in protecting a goblin brood if they can be tamed and controlled. 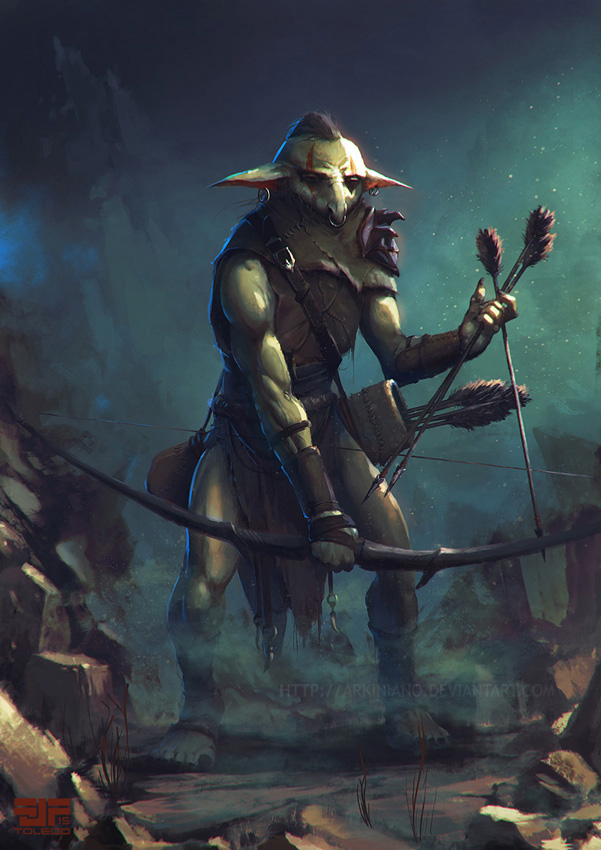 The Verdant Races have always been considered an enemy. Many believed that The Verdant Races were savages. However, there was a single Goblin warchief named Grum that changed this perception. Chief Grum learned how to speak the common tongue from a scholar that was found trespassing on their land.

Grum sought audience with Tammer Roux, King of Estoya, who found their correspondence delightful and still maintains communication. The king declared that the verdant races could be allowed into cities provided they follow the law. The agreement has been alarmingly successful.

The Goblins rarely worship deities. Instead, they often choose to worship domains, or the anthropomorphic Titans that speak for those domains. 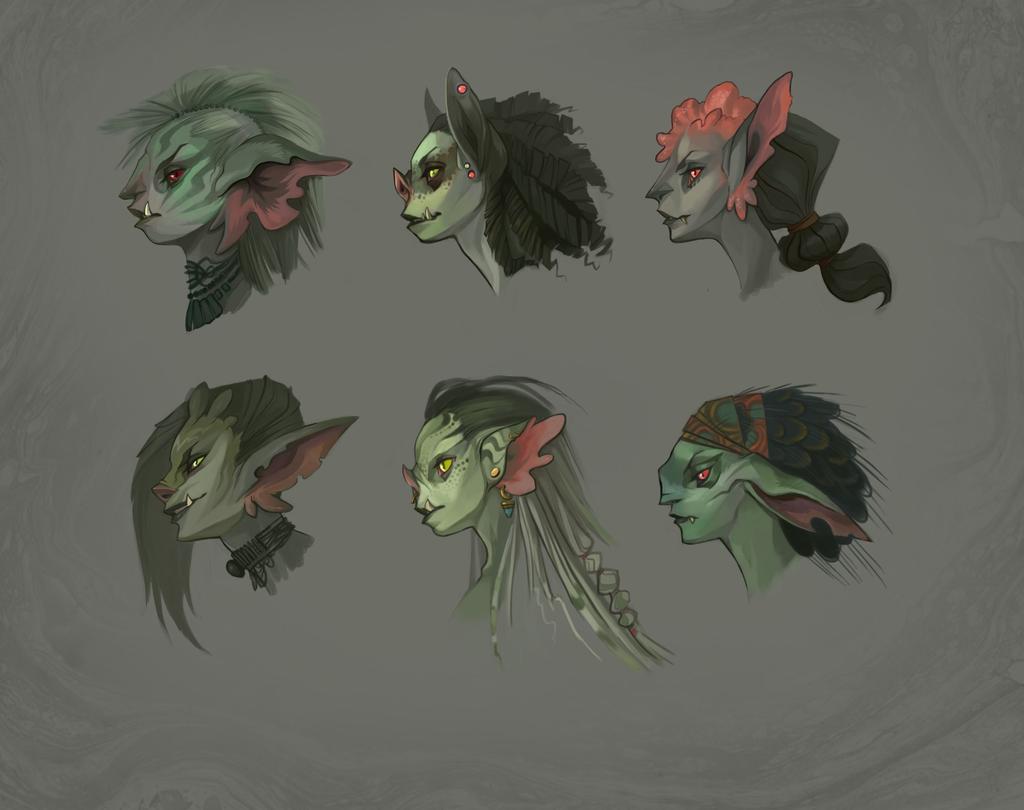 Now that goblins have been fully integrated into society, the overall perception of them has changed for the most part, at least in Estoya. Numerous goblin broods exist in the provinces as well. This doesn't necessarily mean that they are accepted everywhere. In many parts of the world goblins find it difficult to integrate with others.

The racism towards the green-skins persists in many parts of the world, though upon meeting a goblin that directly contradicts the preconceptions and stereotypes of their race, others are quick to change their tune. Still, the racism towards The Verdant Races will persist for quite some time. Usually, they are considered unique from the rest of their race.

The racism is more complicated than simple misunderstanding and needless hatred. This complexity comes from the differences between bound and unbound broods. Bound goblins have caused many deaths. Their numbers sweep across a region, raiding and pillaging at the demand of the brood king. This is not something that is likely to be forgiven anytime soon. 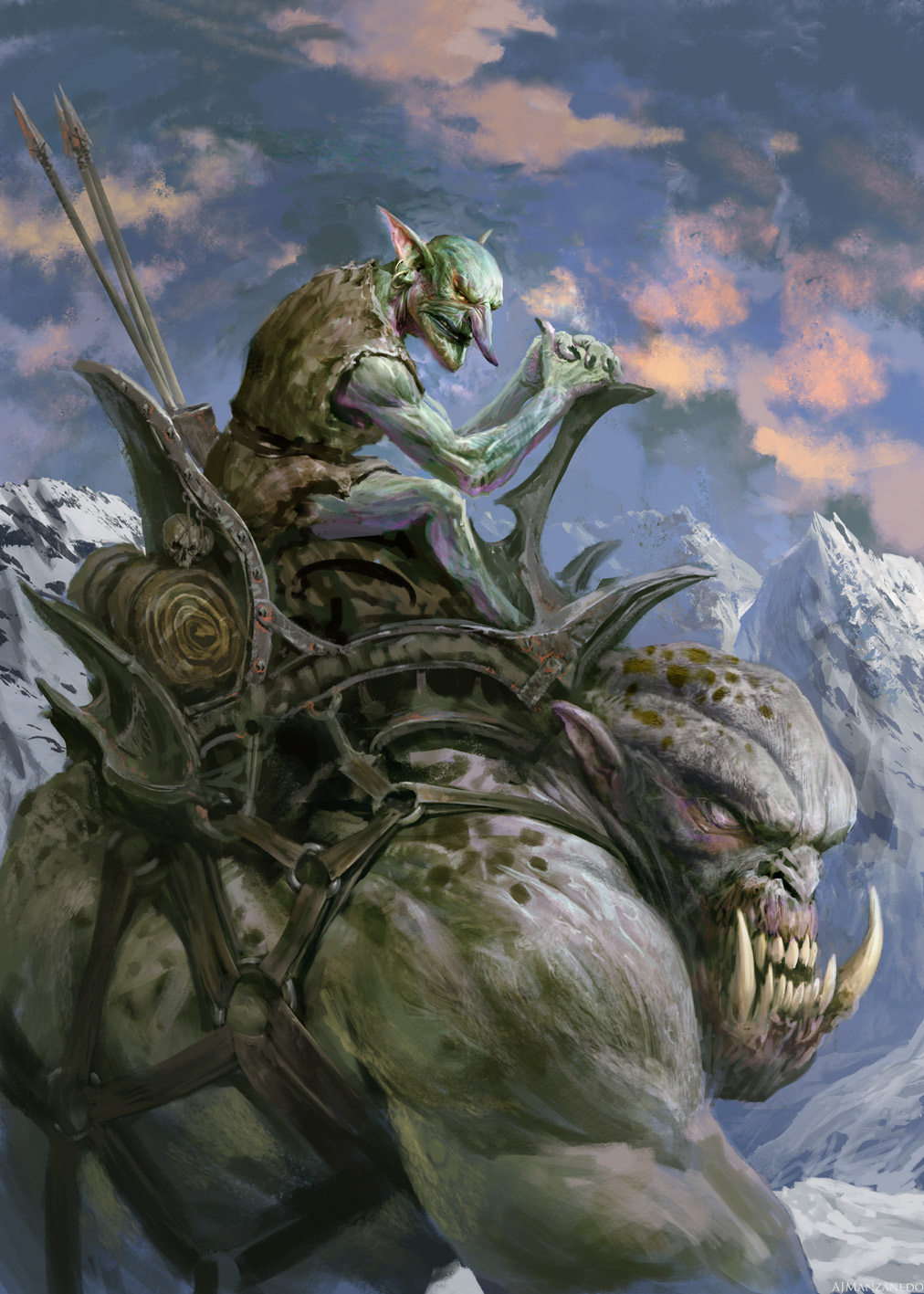 The goblins decided to integrate the trolls into their everyday lives, using their shamanic traditions to connect with the trolls and command them. They used the trolls to protect themselves as brood kings cannot integrate them into their own brood. Kings integrate other broods by creating goblins that possess tendril like limbs that can invade and take control over a goblin of another brood. If enough goblins are integrated, the entire brood can be brought under the king's command with ease.

The trolls have a unique biology. Since they do not have a brain they cannot be integrated, allowing them to defend the goblins. This allows the goblins to progress even further, but it was not a foolproof plan. Trolls can be killed easily enough and their lack of intelligence made it difficult to rely on them no matter how useful they may be. They sought out other races, their cousins. This led to the integration of Orcs, Ogres, and even kobolds.

Goblins have five distinct biological sexes. They have the standard male and female, though their reproductive organs do not function in any way shape or form. They have a neutral sex as well with androgynous characteristics. This neutral sex comes in two forms, depending on whether or not they can produce and plant spores. Those that can produce spores are referred to as neutral females and those who cannot are called neutral males. Scholars also take note of hermaphroditic goblins that can not only produce spores but also possess both sexual organs of males and females. Due to the fact that they reproduce through spores there are no true beauty ideals nor there any marriage traditions in Goblin culture, though they do find these traditions endearing when learning about other cultures.

The goblins consider it strange that scholars are so fascinated by their biological sexes. This is mainly because the Goblins do not acknowledge the sexes or acknowledge their genders. Goblins seldom care about correct pronoun usage and often use them interchangeably when speaking common, leading to the confusion of many who are present. Their language has no equivalent for these terms, but their understanding of common necessitates there use.

Some goblins choose to forego using pronouns when speaking common all together, referring to themselves as simply 'Goblin'. This has further developed the stereotype that goblins are not particularly smart in the minds of those who do not understand why they do so. The Goblins find the stereotype hilarious rather than offensive. They are very accommodating when it comes to the misconceptions of their race however they do become incredibly offended when referred to as "greenskins." 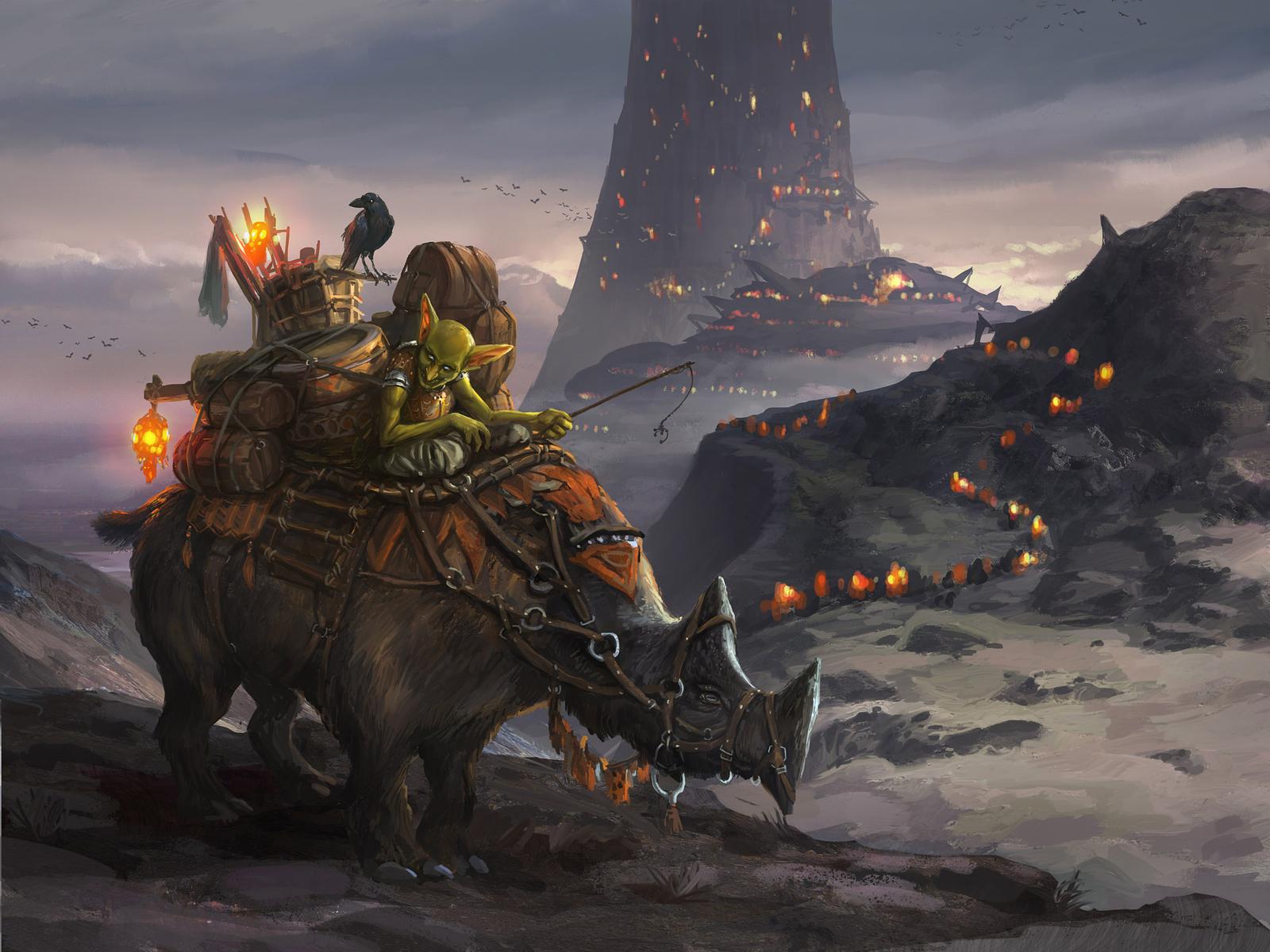 Playing as a Goblin


In the RPG, goblins are available as a playable race. Their increased intelligence and small stature makes them ideal for any party, but there is no small amount of role-playing involved. Goblin characters will in your racism in numerous parks in the world as the expedition explorers.

Most of the time this can be circumvented if the goblin demonstrates that they are not what they seem. In other situations, particularly with an individual who has suffered a personal loss of hands of other goblins, this could be much more difficult and can lead to trouble.

Goblins make excellent merchants as well, being notorious for creating goblin markets all over the world.
The People