C
haren is (presumed to be) a snyre of epic proportion that opened up near the center of the Mouth of Charen. It is located at, roughly, 13°-15° east longitude, and 25°-27° south latitude. It has never been mapped more accurately than this, because no one dares get close enough to auger its precise coordinates. It lies too far offshore to be scouted by air with the aid of a bronz horus. Sailors dare not go anywhere near it. It is roughly 400 kilometers east-by-northeast from Varic's capital city of Guarcoli on the east coast of Islemanoton. It is roughly 250 kilometers south-by-southeast from the southeastern tip of Poglia and 450 kilometers from the northwestern tip of Prielia. It's estimated to be at least a half kilometer in diameter, although various legends portray it as much larger - possibly in excess of several kilometers.

Swallowing the Sea
An endless supply of water from the Mouth of Charen flows into Charen. Cognoscenti have estimated that millions of liters are sucked into its depths every minute. One of Charen's great mysteries is what exactly happens to all the seawater that falls into its gaping maw. No one knows exactly where the water ends up, but all who have witnessed the phenomenon and lived to report on its features are adamant that Charen is not simply a rocky caldera, close to the surface, where the sea merely splashes in, is thrust about, and is jettisoned back out again. Rather, the water that is captured by Charen appears to be sucked into it - and there's no direct sign of how or when it escapes.

Deadly Currents
These reports are bolstered by the dangerous currents attributed to it for many kilometers in any direction. Sailors report treacherous, nearly magnetic, flows that draw in ships and ultimately tow them to a watery death in the middle of the sea. These powerful currents have some predictability by season, and many maps have been crafted in an attempt to aid travelers, but random weather patterns and poorly-understood global cycles can render these maps useless. For these reasons, nearly all shipping on the Mouth of Charen is done by skirting the body's edges. Sea captains have great respect (and fear) of Charen, and always choose to give her a wide berth. Sea voyages between northern Islemanoton and western Islegantuan take many extra days because those piloting the ships chart looping courses that hug the coasts, daring not to travel straight across the sea's center.

Teeth of Charen
For those unlucky enough to get caught in Charen's grasp, the end result is a near-certain death. Even if they could resist the epic whirlpools that snare ships into its grasp, their vessels would be reduced to timber by the jagged outposts dotted all around Charen's edge. Cognoscenti believe that when a snyre created Charen, by sucking its epicenter below the planet's surface, a reciprocal force also blew the edges of the rocky seafloor skyward, creating a hellish landscape of stony outcrops that guard the entrance to the watery pit. Just as the surrounding sea is known as the Mouth of Charen, these foreboding outposts are often known as the Teeth of Charen.

Ontorlands
Some have drawn connections between Charen's disappearing waters and the Ontorlands, but there is no evidence to support it. The epic volume of seawater constantly consumed by Charen means that the Ontorlands would be entirely submerged, if that was the final destination of the flow. But the long history of Ontorlands exploration, coupled with its ancestral people - the Nocterns - living quite well below the surface without drowning, indicates that Charen's waters are not ultimately bound for the Ontorlands.

C
haren's existence was hypothesized well before it was accepted as fact. Before the Age of Expansion, the cognoscenti had started to note that a disproportionate number of journeys taken over the Mouth of Charen resulted in lost ships and lost crews. The embryonic communities of western Islegantuan rarely had the resources to attempt sea voyages back to Islemanoton, but when they did, they carried an ingrained fear of the Mouth. By 393 AoC, the Auld Cervian cognoscenti Marysa Dubois demonstrated that the floating trajectories of any item set adrift from the eastern shores of present-day Poglia, Tollia, Varic, Ponia, northeastern Catro, or Morvatia would, if given enough time, eventually float out to some centralized point far off over the horizon, roughly in the middle of the sea. Based purely upon this evidence, she hypothesized that there was some force out there, near the core of the Mouth of Charen, that was "pulling" objects to a unified center.   For several hundred years after the Age of Cervia, the sea remained a dreaded pathway for any seasoned sailors. Some of early civilization's greatest captains refused commissions that called for them to run straight through the center of the Mouth. But it wasn't until 818 AoE that casterways received their first eyewitness account of Charen's horrors.

Sole Survivor
Nikolus Gorth was a yeoman on a Poglian catamaran bound for the outpost of Pydrethyre on Convikt Motte. Their cargo was precious and their schedule was condensed. So their captain made the fateful decision to cut straight across the Mouth of Charen to make their fateful delivery. That delivery would never happen.   On numerous occasions, Nikolus retold how their ship was drawn into a tremendous vortex. The vortex culminated in a rocky ring of spires that disassembled anything headed for the center larger than a row boat. He didn't understand how, but through some random act of fate, the sheer force of the central vortex sent him careening out of the pit while clinging to a fortuitous piece of the ship's flotsam. He attested to the horror of seeing the remains of their ship - and some of his struggling shipmates - being sucked into Charen's depths, even as he was rocketed outward to more-forgiving currents.   When he washed ashore near Cantefipi, his story was originally dismissed as nothing more than a fanciful sailor's tale. But with the further accumulation of lost ships, and with the scant recollections of other souls who somehow managed to escape Charen's wrath, his story was eventually recognized as the first eyewitness account of the incredible phenomenon. 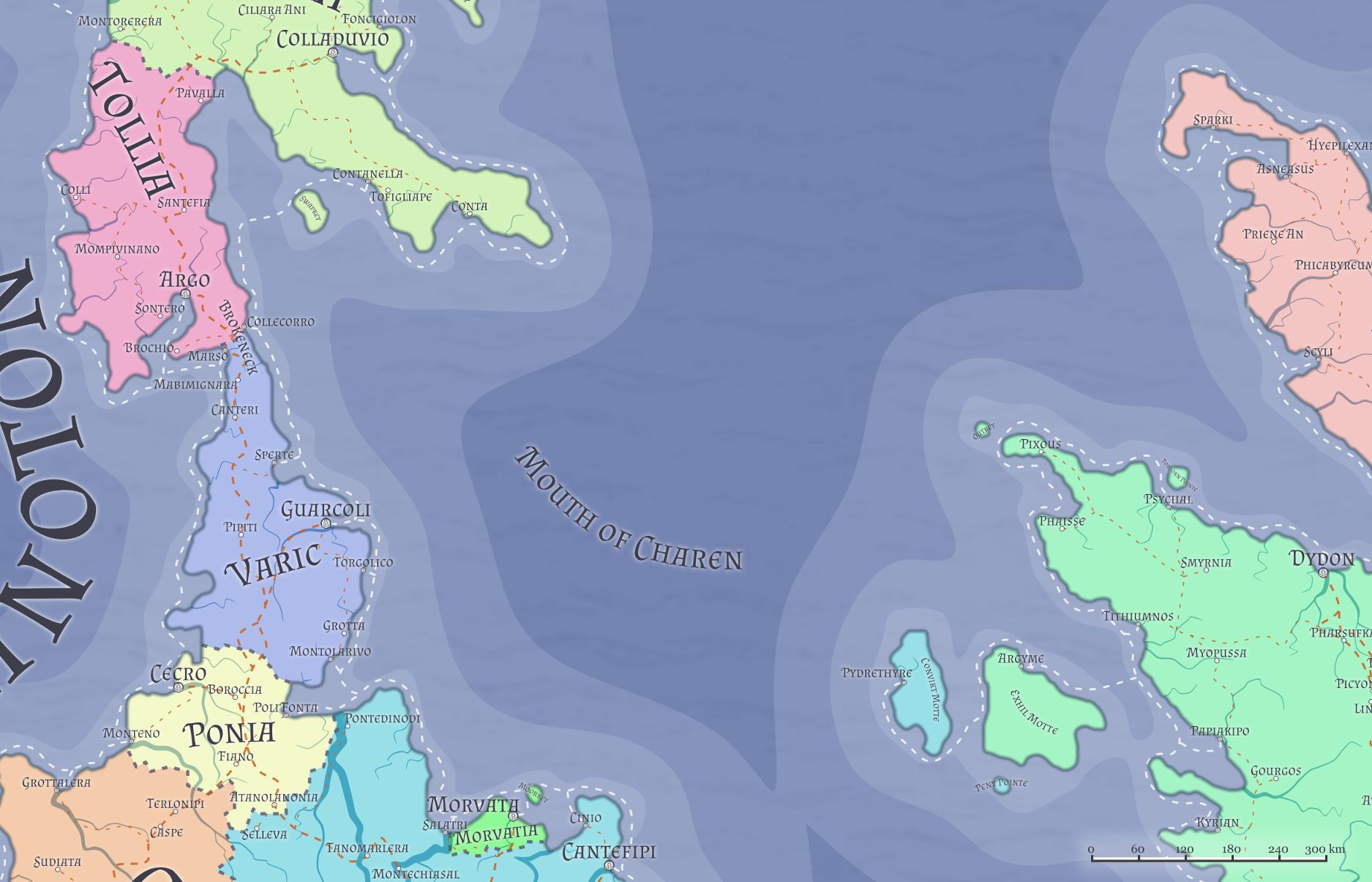