Madame Fas is the daughter and primary competitor of Madame Tszujment

A pause, silence, Madam Fas calmed the tulmult of noise from her accompaniament. "Instead, I am going to make a cut here, enterweave some meta lattice, and curl it as so." There was a moment of concern, undoubtedly latent emotions from her entourage for the safety of the fashion model wearing this piece. Such a sharp edge could draw blood. But really, why shouldn't the white of the catwalk have a dash of red? These fame-seeking leeches called 'models' knew what might be needed of them. And for Madam Fas, there was no greater duty for such lowly beings than to serve.

Turning, the skulls of only the best fashion designers of the past softly clacked and clattered together. Held ever close to her own. A collection of inferiority for her own designing might and superiority. Her own very-much-alive head a crown atop the pile, the centerpiece of her entourage as they remained ever in whispering distance. Their voices to be heard and often unheeded, their thoughts like tendrils into her mind to evoke spiteful epiphanies. She was the best, she would remain the best, and she did all she did for her own glory and the bemusement at the anger of those who came before her. 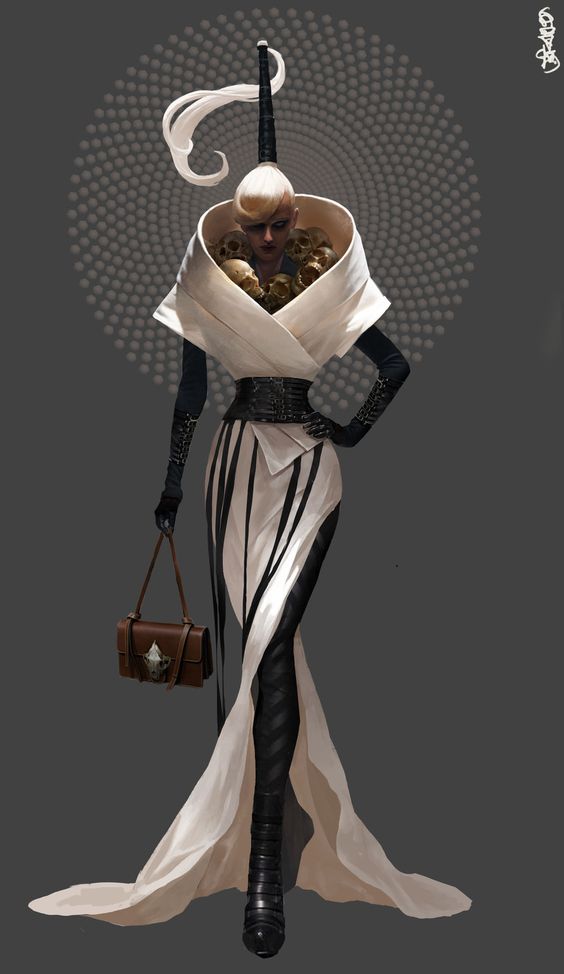 Madam fas’s greatest goal is to have her mother's skull stripped of flesh and placed in her collar of skulls. Preferably under her chin or facing away or some demeaning position for the greatest competition she has had.

This work is licensed under a Creative Commons Attribution-NonCommercial-NoDerivatives 4.0 International License.
All content herein is owned by Ethnis and Ethnis Studios, which are owned by Ademalian Enterprises.
It is developed by Ademal and co-developed by Barron.
All other credited work is either commissioned or gifted fanwork.
For more disclaimers, read here. Credit to TJ Trewin for the idea for a header bar!
Cover image: Hedon Banner by Ademal