A genius engineer, able to construct advanced equipment on the fly! The Pionier has even invented several of the gadgets other characters use — now he's investigating how to incorporate the strange energies of the Embershard!
Otto always built things and earned his nickname, Pionier (engineer), before starting school. What he didn't care for was people telling him what he could and couldn't work on. Teachers praised him for improving school security but reprimanded him for building bully deterrents that shot nets at those Otto didn't like. It was only because of his obvious genius that he was excused repeatedly. He secretly envied his sister, Valerie, for being able to go her own way without being bothered by the judgment of others. He regrets taking this out on her as teasing, but hopes that she knows that it's all out of love.   Eventually, Pionier started his tech company, Pyloner Gbh, and it has made him very rich. He believes nothing should stand in the way of invention, and private companies like his is the way forward! The creation of WARD as the sole organisation to investigate Lemuria is absurd — this isn't a matter for nations, it's a matter for the most clever people! This strange Embershard must be understood so that its power can be harnessed, and Otto knows he's the one to do it! If the others understood his genius, they'd let him be in charge.

Otto has better things to do than worry about his hair or clothes. They're always in a mess and usually stained with grease and other things due to him working on his latest project. He is a determined visionary whose posture reflects always considering how to design the next invention to solve a problem. The tool belts around his waist legs have everything from a simple wrench to a high-tech scanner, as his expertise spans every form of engineering.   Being on Lemuria, the Pionier has quickly adapted to a much more physical lifestyle than he's used to, but he has found that he enjoys the challenge. He still sometimes forgets to eat and sleep while too busy with other things, however. 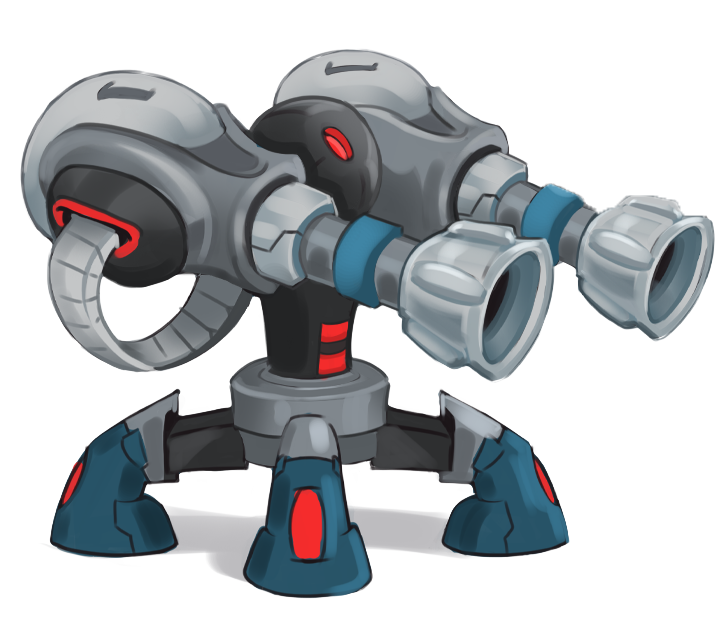 Otto has built a turret compressed as energy in a pack on his belt, something made possible with a small piece of Embershard attached to the circuitry. The pack can be tossed onto the ground where it constructs itself. With the mystical energies of the Embershard, he aims to make something even more advanced in this technology — the Sentinel turret is only the beginning. 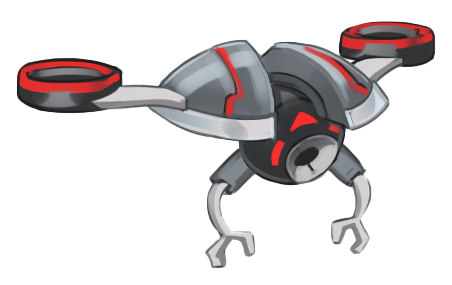 Pionier's drone, Ed
Across a shoulder, Pionier has a folded up drone that can quickly be deployed. He uses this for both surveillance and to handle enemies. It can send out electric shocks that can bring back Sentinel to full power if it has been damaged, but it can also zap those who come too close. The exploration drone, Ed for short, is a constant companion to Otto.

As he became a master of building things, the Pionier also became bored with anything quickly. He built some of the most sophisticated technology on Earth but rarely kept colleagues up to date with what he was doing, and most of his inventions remained prototypes. He constructed most of Snow's arm, for instance, making sure it had all the accuracy and stability the original did. But Otto didn't take any notes while working and doesn't remember the details.   The Vielseitige Eisatz Roboten, especially series 5, were proof of how technology can help where humans fail other humans. But the 5.3 unit exceeded all expectations as it gained sentience and ran away. This cost the Pionier greatly, both in terms of money and goodwill, but he can't help to be proud of his accomplishment.   The Pionier is a genius and always inventing. He has no time for people who can't keep up with his speed of thought and prefers to build things as he's designing them. He also considers most of his inventions disposable - he'll build a new, upgraded version anyway. Even when he forms an attachment, such as with his Sentinel turret, he always considers it a work in progress. Sentinel Mk LVII is a lot better than Mk LVI, after all.

Both Snow and the Pionier have worked for many different organisations throughout the years and have had reason to join forces. Duron one such time, the Pionier took an interest in the technical aspects of Snow's skills and designed a new scope for the sniper, enhancing his skill even further without alerting the enemy through any glare. This mutual respect for the other's skill has laid the foundation for a lasting understanding.

The Pionier, Otto, was nine when his sister was born. She wasn't planned and Otto was used to having all the attention of their parents. He was already a prodigy and getting competition only fueled his ambition. Valerie grew up knowing she wouldn't be able to compete with her brother on his terms and instead went for the humanities and obscure knowledge. This might not have given her the respect she wanted from her family, but she made a found family in the geek community.   Today, the siblings care more for each other than they'd care to admit. They are still rivals in a sense, but no one else is allowed to push the other down.

The Pionier spent some time as an assistant professor and during that time he took the up-and-coming Carlisle under his wings. He saw the great potential in her but worried about her lack oof concern for which contracts she was willing to take on. As long as she recieved funding for anything cutting-edge, she ran with it. Eventually, the two had an argument that ended with an explosion in a lab, the Pionier leaving his position, and Carlisle getting a job for a covert ops organisation.

Only the two of them truly know what went on in the lab that burned down before they parted and who caused what to happen. Neither is willing to share, but it's clear that it led to an outright hatred of each other.