Once a skilled huntress, Arachne was cursed into becoming a monstrous spider-creature. She is deadly mentally and physically, and completely ruthless. 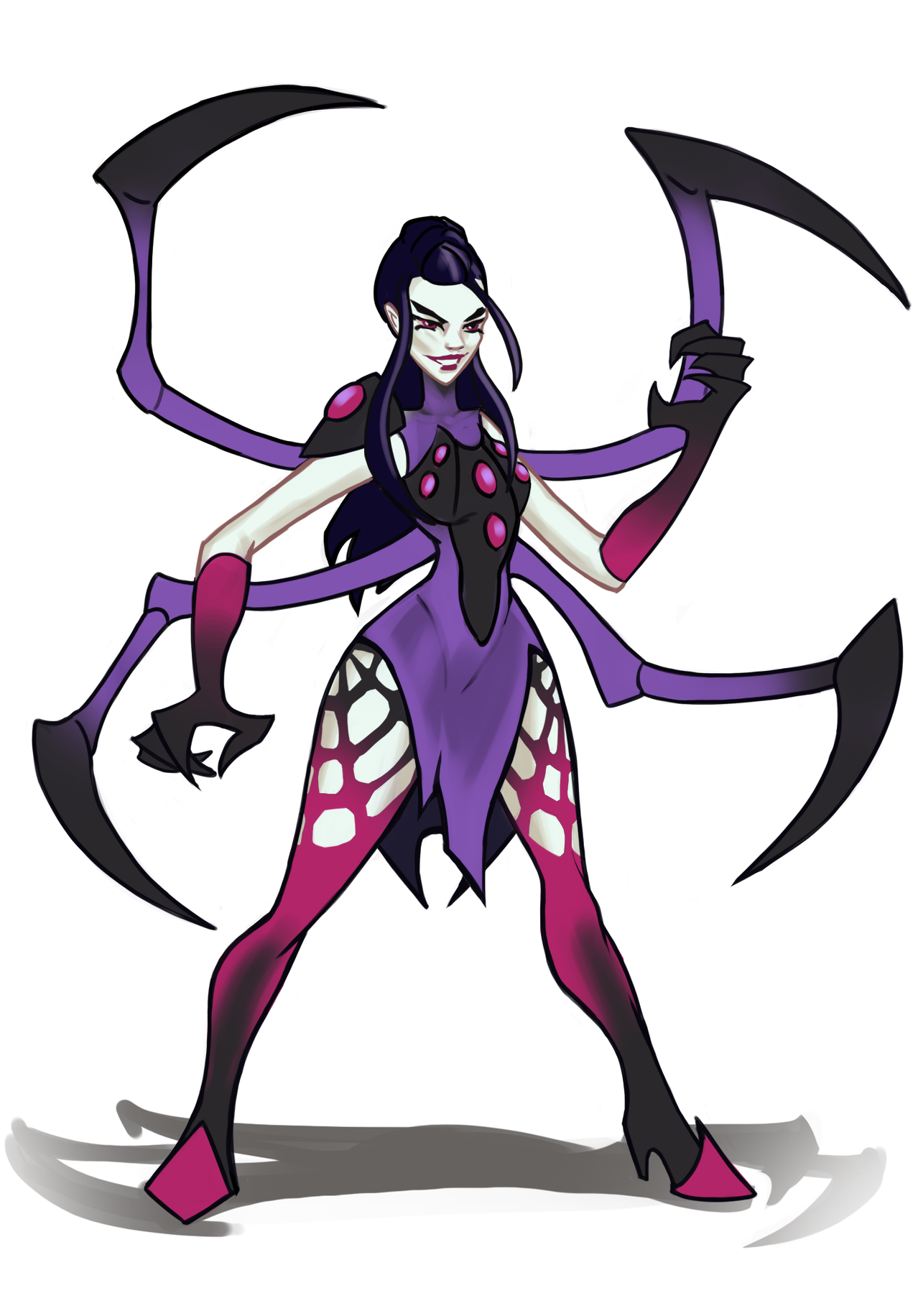 Once, Arachne was a monster hunter, renowned throughout the Anatim Empire for her beauty and skill. But all that attention led to hubris, and she went on ever more dangerous expeditions. This led her to the caverns of Lemuria, searching for the strongest enemy she could imagine, one perceived as a god: the Spider Queen!   One doesn't simply challenge a god and get away with it, however. The Queen turned Arachne's beauty monstrous, made her reviled instead of revered, and made her thirst for blood. Horrified by what she had become, Arachne hid deep within the mountains and forests of Lemuria for decades, never aging but always vengeful.   The people of the island only got some respite from the soon legendary monster as Athena took command of the local garrison. Arachne didn't realize what her connection to the woman was until after the Shift, but she knew there was something.   The shift also caused another awakening for Arachne. As the Embershard broke, she regained control of her mind, no longer bound to be a monster nor the arrogant hunter she had been before then. But what she might be instead remains to be seen.

Arachne is still visibly humanoid, but she has four long, almost bone-like, protrusions extending from her back as extra arms that end in sharp points. Her skin has turned extremely pale for the most part, except her black hands and feet and the magenta and purple that spread from there. The colthes she once wore has partially fused with her form and a carapace of sorts has formed over her chest.

Much of Arachne is defined by the struggle between the huntress she once was, the vicious monster she became, and trying to understand what she is now. She is deadly, physically and mentally, and always ready to strike should someone displease her. When she tries to bring back some of the allure she once had or otherwise make people follow her, it's usually to trap them in her literal or metaphorical webs.   Once, Arachne cared mostly for glory, but now, she considers survival to be the ultimate measurement of value. She can kill with just her poison, but also able to handle herself in direct combat if needed. Until someone else has shown themselves capable, they are insects who should do her bidding or die.

Before she left to defeat the Spider Queen, thinking it would be a quick job, Arachne gave birth to a baby girl. In her confused state after the transformation, she only vaguely remembers her past and can't figure out what it is that she's missing.   Meanwhile, Athena was at first held in a magical stasis, waiting for her mother's return. When it became clear she wouldn't, the girl was raised as an orphan and given military training. Her long life since then comes from her half-elven heritage.

When was formed, Arachne had already been skulking around the island for a very long time. The two have rarely met before the shift of Lemuria to Earth, but now they're competing for the same mountains and run into each other on a regular basis. The two are very different, but they have found a strange bond founded on mutual respect and frustration.

Both of them are aware that the source of Lemuria's power lies somewhere underneath it. Keeping this secret away from others is one of their primary concerns.

These are two of the oldest inhabitants of Lemuria, even if Anito might not seem it. They have both tried to stay out of larger conflicts but have focused on those approaching their respective homes. That's where similarities end.   Arachne is a predator who lulled victims into a false sense of security before attacking them. She spread rumors to make thrill-seekers visit her despite the horror stories about the area.   Anito played tricks on those who approached his home, making them get lost, end up in danger, or make a fool out of themselves. He helped as much as he hindered, but always with a twist.

No matter their differences, Anito and Arachne see themselves as natural defenders of Lemuria. They don't like it, but sometimes teeming up is their best chance at preventing the unworthy from learning the island's secrets. 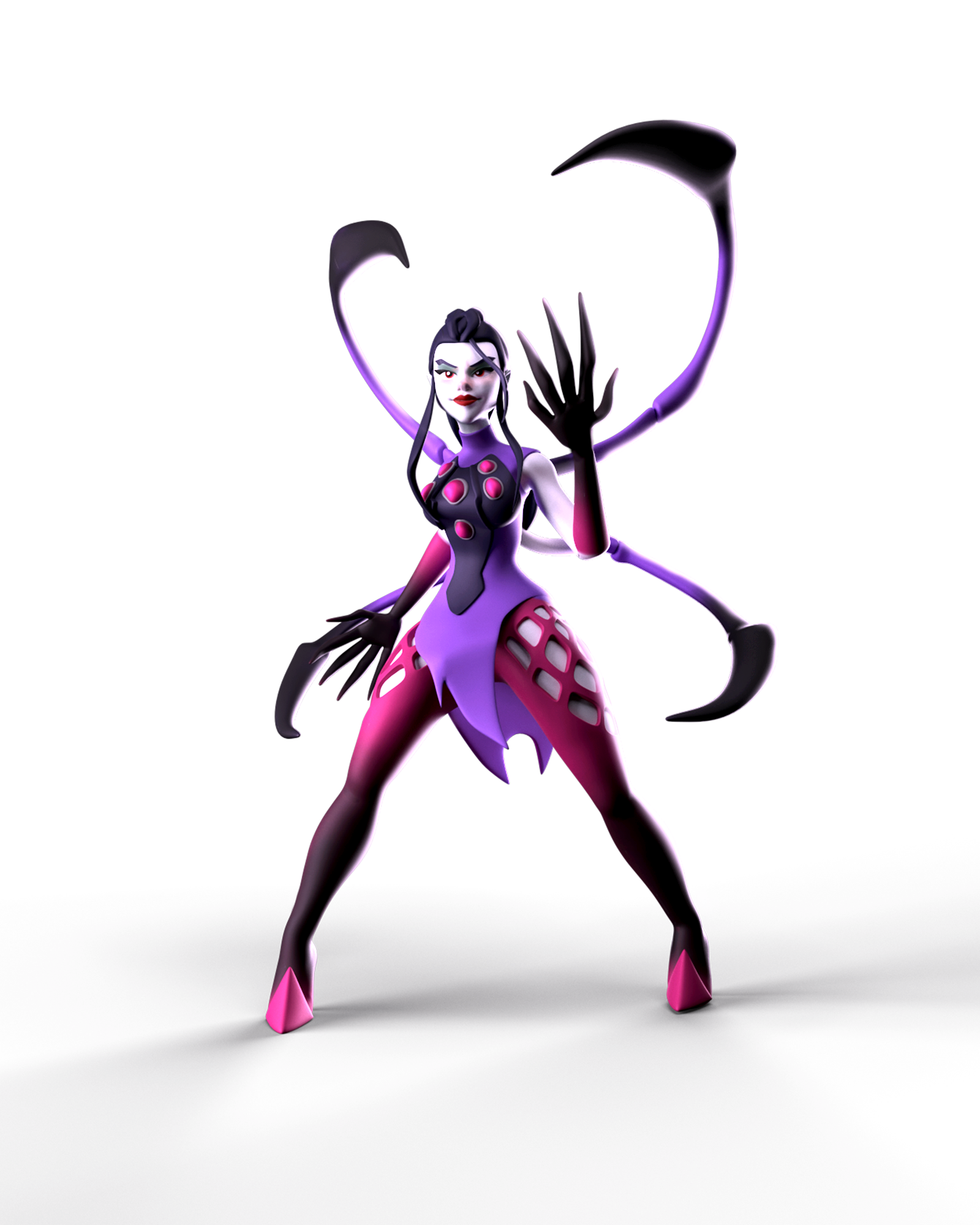