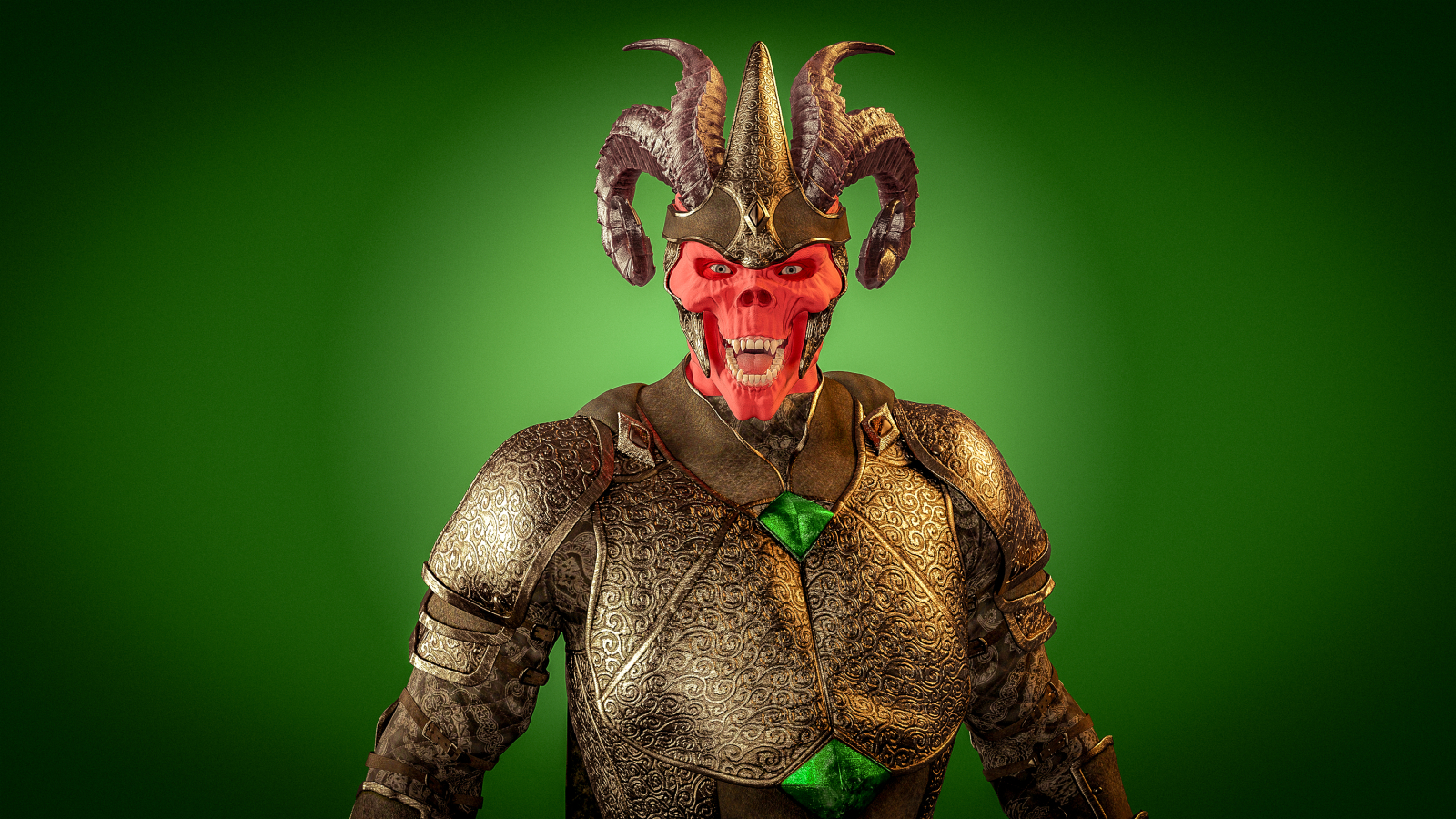 Stagnekad the Defiler—the Father of Fangs, Duke of the Dead, and Scourge of the Halflings—is a kíndallan siphon considered to be the most powerful necromancer in all of Eden. His creation of the vile Oragas Ríxfíg, which he crafted from the blood and bones of the beloved Winkie explorer Lüe, is widely held as the most heinous act ever committed in the postapocalyptic paradise which he now calls home.

Though he is kíndallan and can therefore change his appearance at will, Stagnekad understands the power of a consistent, frightening visage. When it comes to earning the fear and respect of the common folk, there is nothing more effective than providing an easy-to-capture and impossible-to-forget face for the world’s most horrifying boogeyman. Therefore, Stagnekad most often appears as a tall humanoid figure with a horned skull for a head.

His dark red skin belies his kíndallan heritage, but the horns he wears are not the small “devil’s horns” typical of his people. He has crafted a quartet of massive ram’s horns for himself instead—which he believes, quite correctly, to be more intimidating. And to finish off the demonic effect, drawing from his vast knowledge of Earthling and halfling folklore, he has given himself a pointy, prehensile tail.

Personality-wise, Stagnekad is a sociopathic megalomaniac who is convinced beyond reasoning that only he knows what is best for the world and the lesser beings he shares it with. Since childhood, his actions have been driven by a thirst for knowledge and a drive to prove himself “better” than anyone he encounters—though he couldn’t tell you who he is trying to prove himself to.

Stagnekad was born Stagnekad d’Mol on the planet Gadalla during the Earth-1 iteration of reality.

His childhood and adolescence were uneventful, spent learning the arts of war and statecraft amongst the Kédaliknan elite during a decades-long ceasefire in the Thousand Years’ War. With the elves no longer terrorizing the countryside and slaughtering innocents, one might think Stagnekad would’ve focused his studies on something other than the relatively short lifespans of his kíndallan brethren. And yet, no other subject could hold his attention. It seemed profoundly unfair that the elves should live so long while the kíndallans died so young.

With the ceasefire still in effect, Stagnekad spent yearing poring over elven tomes on the subject of necromancy—books that would have been unavailable to previous generations, but which he could request via interplanetary interlibrary loans. And yet, none of the volumes and volumes of elven research into the secrets of the Veil of the World and The River Without End provided the answer that Stagnekad was looking for: a way to grant everlasting life to a species that hadn’t been born with such a gift to begin with.

What the frustrated kíndallan did discover, however, was that the enigmatic fae might be able to provide a kind of immortality—for a price. And so, though it would grant the blessing of immortality to him and him alone, Stagnekad took a chance, found a fairy, and made a bargain.

A bargain which made him a vampire of sorts—a siphon—but hey, he couldn’t very well discover the secret to kíndallan immortality if he died now, could he?

At some point, as all iterations of reality do, Earth-1 collapsed as part of a Calamity—an apocalypse which brought Stagnekad to the mysterious land of Eden. And it was here that the true villainy of our hero was unleashed.

Mentally broken by the notion that all his work to live forever could be undone by forces beyond his control—by malevolent “gods” who thought themselves his betters—Stagnekad worked to understand the nature of Eden, and to learn how he might remain here even after reality was rebooted into its next iteration. This land was where the gods dwelled, he reasoned—or was as close to where they dwelled as he could get—and so, this was the best possible place to find them, and to kill them.

When he learned of the gods’ bargain with the halflings, which would allow that species and that species alone to remain in Eden as its caretakers, Stagnekad set into motion his most foul plan yet. He would carve off a piece of himself—an act most kíndallans reserved only for procreation—and he would encase that piece inside of receptacle of halfling flesh and bone.

The gods, he reasoned, could not make him leave Eden if a part of him was shielded by the life’s blood of their favored people. And he was right.

The Oragas Ríxfíg—loosely translated from the Moldése as “soul cage”—which Stagnekad crafted following his murder of Lüe the Mapmaker, was all the loophole he needed to remain in Eden and to continue his search for the sister goddesses. And here he has remained ever since, operating from a secret lair deep within the Forest of Fangs, bent on nothing less than the domination of the universe and the subjugation of all life to his vastly superior will. 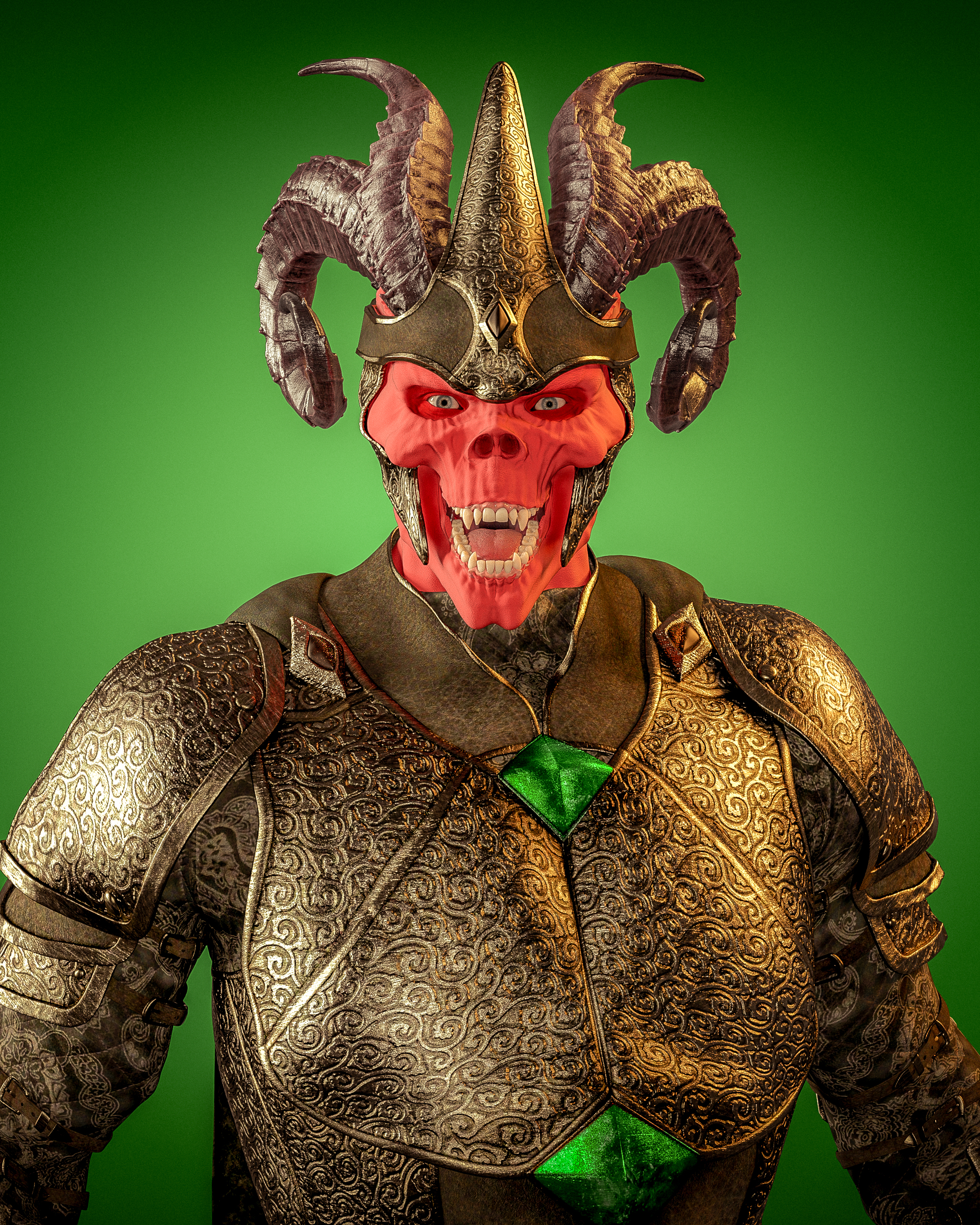 Answering: "a person considered villainous or monstrous"
Visit eccbooks's Competition Page Check all other answers to this prompt Competition Homepage