Adryean James Augustus Finkleroy, commonly known amongst less-innocent parties as "The Fink" has known no life of luxury or grandeur. A simple man, Adryean Finkleroy's life has been plagued by a series of unfortunate, surprising, and unbelievable events.

Born in an Altonar brothel called "Red Rose Heights", young Finkleroy was the child of a prostitute named Gingersnap and one of seven regulars whom have either died or are not able to be contacted. Although poor, Finkleroy enjoyed the company of books which fell off of trucks, abandoned in the streets, or were bought for the loose earnings from local bookstores for cheap. He learned reading at a young age from the brothel's owner who often watched over him during service hours, and when he wasn't reading or studying books, he found work at local blacksmithies and machine shops located in upper rings as a child laborer.   As he grew, so did his curiosity and he was often found building odd and crazy inventions around the brothel for both patrons and workers alike. His talents and knowledge had enterprising ambitions as some locals came from all around to see the Genius At The Rose, his contraptions and machinery wowing patrons from all around. These rumors eventually caught the attention of the academics at Altonar University, who decided to "scum" it down in the lower sections of the ring. They searched three days and a few hours before eventually found the small brothel. They demanded a demonstration of the contraptions of the young Finkleroy.   Finkleroy made a bet with the academics, one that seemed innocent at first but to those unaware, had disastrous implications for the opposing party. An arm wrestling contest, a test of strength. Adryean was quite younger than these toned academics and seemingly posed no threat to these hearty men from the University on high. The men agreed and a table was set. The first was beaten handily with a broken wrist, the second nearly fell from his chair in surprise at how quickly he was crushed. The third put up a larger fight before something sprung and the man was tossed upside down from his stool to the ground by the teenage Finkleroy. Shocked, the three were introduced to the first invention of Adryean Finkleroy, the spring-loaded arm catapult.   The news spread across the campus of the amusing Finkleroy and his contraptions, so it was no surprise that when he reached his young adulthood that they chose to sponsor him. Ecstatic, Finkleroy quickly packed and said goodbye to his mother and her twelve co-workers and the owner, the workers at the iron works and machine shops, and one stray cat whom he named "Twigglehorn".   However, it soon became clear that Finkleroy was not ready for the task ahead of him. While he was intelligent and inventive, his academic knowledge of history, stories, and lore quickly showed itself as he regaled classes with stories of legend and folk lore without much factual evidence. Finkleroy, the Genius of the Rose, was no longer renowned and joked as he was before. He had become a laughing stock by students and teachers alike. His contraptions went from talented to laughable, and his general outlook on life became bleak. Creativity and ingenuity drained from him in just months of joining and his mothers could see it as he came home from his first year.   It was over the summer, talking amongst locals and patrons, that he discovered that he was street smart. His knowledge of people far outweighed academic and educational knowledge, he decided to leave the university before the next year. However, he soon learned this was impossible, as his grants had to be exchanged and paid for before he could leave with money he didn't have. He sulked, locking himself in his room for days on end. That would soon change. The Academic Handbook claimed that the grants would become null if he were to become expelled, removed from the campus. With a song in his heart and a bag full of spare parts, Finkleroy prepared himself for the greatest failure of his life and, unexpectedly, the greatest adventure of his life.   Stealing parts and components from the university, calling in favors, and even convincing some other students to help, Adryean Finkleroy created a machine that was designed to fail. The only way to show the stuffed shirts of the academic society that he was not fit for the grand university. He presented it to the board at the start of the semester, a giant contraption that wielded slingshots, possessed large robotic arms, and a large spinner in the middle for small objects. The council stared dumbfounded at the monstrosity of mechanization, then Finkeroy turned it on. The machine wound up with pumping pistons and meshing gears. The arms lurched and soon, it began to make frozen ice cream cones. A delicious treat for all. Finkleroy smiled as he waited for the moment, the exact second that it would begin launching ice cream at everyone. That moment never came, as pressure built up from an iced over tank of chemically chilled ice cream which quickly exploded. The machine spun wildly, sparks danced onto the ancient carpets and wood paneling of the room. The fire engulfed the room, killing no one, but leaving damage beyond measure. The council demanded that Finkeroy be tried and held responsible.   Scared and alone, Finkleroy did what any sane man with a silver tongue and a silvery-er wit could do. He ran. Like really fast. Escaping from his cell with a combination of contraptions and parts in a backpack full of dreams, hope, ambitions, some regret, and adventure.

He spent a week in hiding in the city of Altonar, collecting old debts from his friends and loved ones to be able to afford a ticket aboard one of the bio-diesel locomotives out of the city. His hard work eventually paid off, and he found himself on a passenger car heading towards Svalbrynd. Broke, homeless, and with no friends, Adryean found himself working at the docks where he spent months moving cargo and unloading ships while hiding and sleeping in the variable warehouses.   After a long year, Adryean found himself making his first real friend after a long time, a young captain who had been on shore-leave as his ship was being repaired. The two often drank together and told jokes, seemingly inseparable. This would prove surprising when Adryean, after a long night with his friend, awoke aboard a sloop in horrid shape with a demoralized crew. His friend, a hard captain who worked his crew with an iron fist and treated Adryean with a short temper had press-ganged him. He would remain aboard the wreck for a hard eight months.   But during that time, a miraculous thing happened, Adryean was able to impress his captain and crew with his mechanical skills. Simple tasks completed and more complicated repairs done cheap, the floating wreck quickly improved into a decent, if not well armored ship. He eventually found himself freed of his servitude and out of work, but that did not stop him from coming aboard similar ships in horrid condition. For the next four years, Adryean hopped from one ship to another and repaired them and improved them. His technical skills earning him a name and mention in even major pirate houses.   Eventually, he met a young female captain by the name of Maria Salamanca in the pirate coves of Porasta. She had come to hire the young shipwright, but things took a different turn and they ended with a passionate night in the port. In the morning, when her crew came searching for her, they tried to flog Adryean much to her protest. Not keen on the heat, Adryean eventually escaped, and stowed himself aboard a departing ship known as "The Temptress", only to learn later that he had taken the wrong man's daughter to bed. 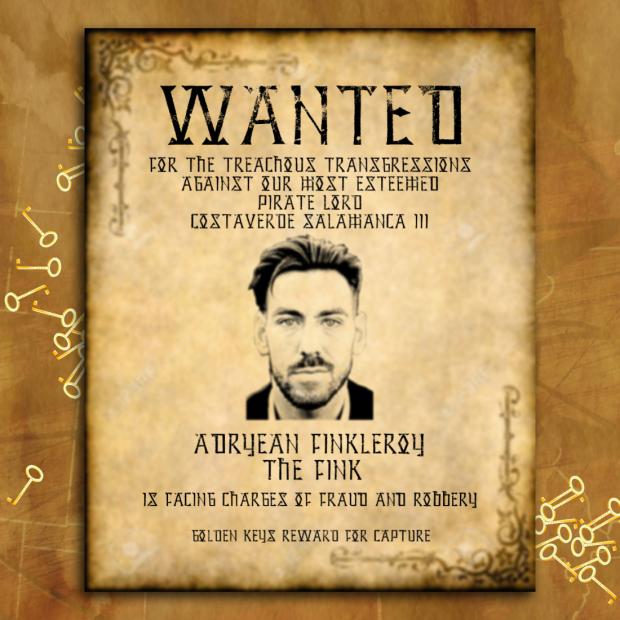 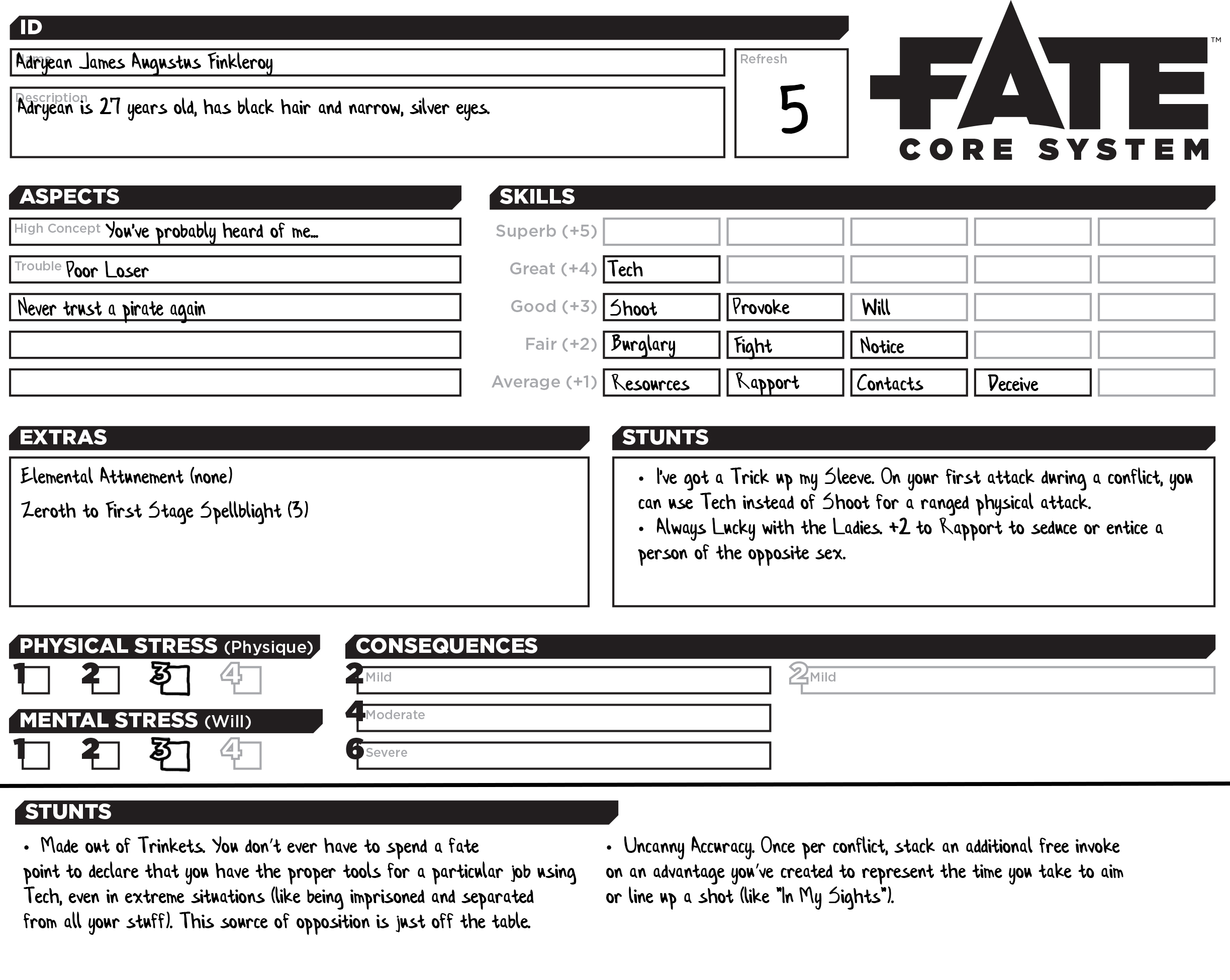