When your mayor is a nature spirit and her chief of staff is a druid, you should not be surprised that the municipal staff are comprised of cats.
-Yelsin, clothier and cobbler 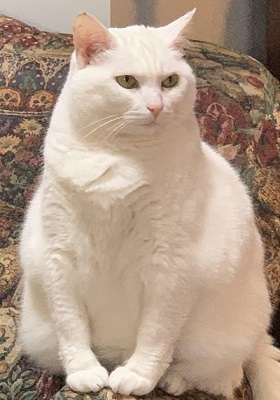 Isis by samsaratg
In any village or town with a number of grain fields, you are going to need a cats that are good at hunting mice and rats. Pumpkin had been filling that role dutifully before the arrival of Lavani. They were not magical or of special descent. They practiced, hunted, and were good at what they did. As any good mouser would do, they also were very practiced at delivering their packages to people.

It wasn't long after Lavani arrived that the people of Montsilt began to see Pumpkin bringing items to a door. They would scratch until the people answered and greet them with a 'meow' - package delivered. It would often be letters from the town hall or an item someone requested.

This mostly black cat with a few white highlights had been around the town since Antum moved into the wizard tower. It mostly stayed in the tower or close to Antum until the arrival of Lavani. It was also a minor nature spirit that Antum had summoned as his familiar. Azriel was particularly adept at knocking the quills of apprentice wizards behind bookshelves, finding things that Antum would misplace, and being in the right place to listen to conversations.

After the arrival of Lavani, it became a conduit for communication between Lavani and Antum. It could communicate telepathically with Antum. He could be summoned for meetings or for advice on a variety of topics. Azriel itself had a lot of experience with people. It shared tips and information with Lavani to resolve conflicts and improve communication.

A semi-tame Anhult Wild Cat, slightly larger than a house cat, found near the village of Everst. A child from the village, Bella, had befriended the cat and was feeding it. When Bella was evacuated from the town, Lynx went with her to Montsilt.

Lavani greeted the cat with treats and all was good from there. Lynx can be found scouting around the fields that surround the town.

No one is sure where Moonpie came from but they arrived in early April and began hanging around Pumpkin. Moonpie seems to encourage Pumpkin to do feats of daring with elaborate 'meowing' monologues. Moonpie is also very efficient at delivering messages or items from Lavani and has been known to summon people to town hall when Lavani needs them.

It didn't take long for the people of Montsilt to realize that Moonpie was a breed of Reference Cat1. This common house cat's breed was selected to be exactly 1 foot tall when sitting upright. While Moonpie is in front of your vision (typically while being held) you can calculate the exact measurement of any object that is also in your vision. This breeding has brought out other traits that are not as helpful. Do not leave your water glass or ale unattended when Moonpie is around. They have a keen interest in knocking over any container with liquid in it. 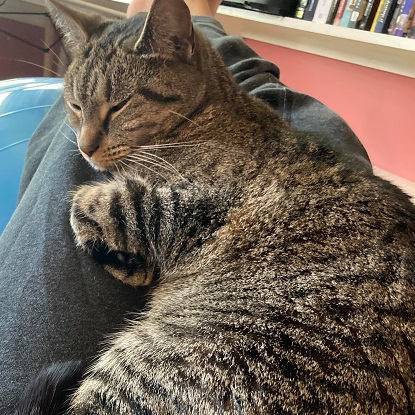 Iris by samsaratg
This cat is a minor nature spirit that was summoned by a spell along with 7 other spirits in the shape of cats. It is a large cat, almost the size of a panther with thick fur. When the spell that summoned it was ended, it never returned to its point of origin with the other spirits. Instead it has joined the ranks of the Cats of Montsilt and guards the children of the town.

A caravan usually has no problem allowing a cat to tag along, especially if it keeps pests away. Callisto arrived in Montsilt with a caravan from Etonia. Anytime there are several people looking at the cat she believes it is time to perform! The performance is mostly to aquire extra attention but has been used to allow Pumpkin to sneak into the smoke house to grab a collection of meats. The 'ooh' and 'aah' of the crowd is what she is after. If someone does not have time to pay proper attention she will lay on parchments, scrolls, books, or whatever they are busy with to redirect the attention of her target. Callisto will remember the afront and respond with double the sass needed to correct the person's behavior.

As with all the cats, Iris is extremely friendly but compared to the other cats, she is not very good at directions. She will get stuck behind open doors. Messages get delivered to people on the opposite end of town from the actual recipient. Iris was lost in the forest when she was found by a ranger and brought to Montsilt. Where Iris shines is with her patience with children, allowing them to drag her all over town.

There are a growing number of cats in the town including Zipper, Snap, Button, Charlie, Tony, Zima, Baby, and Isus.
Mind Restoration Pills
Montsilt
Thorngage Halflings

Answering: "a species of working animal"
Visit George Sanders's Competition Page Check all other answers to this prompt Competition Homepage

My family had a cat that would jump up on the window sill by the phone whenever we were talking to someone on the phone. When I went to college, that cat would answer the phone when I called home. It would meow in the receiver when I talked to him. My parents would regularly find the phone off the hook during the day when they returned home from work. Recently, a player from my D&D game declared their character was seeking a herd of cats. It was not a big jump from there to imagine cats like the Cats of Montsilt.