Didja hear Thorny? Hear what? Why th' word about a cure fer th' blight makin' it so hard fer us to get a crop outter th' ground! That blasted Wastin' from all that time back... from the Strife itself... But now there's a treatment. A bit harsh ter make, but what's a few faeries when it means we can feed our families better, and finally make a bit o' coin selling grain ter the cities up north.
— A coastal frontier farmer talking to a friend.

The Wasting was inflicted on the land over two thousand years ago, and its effects can still be seen in vast regions of Cartyrion. Elves, Fey, and other Folk have striven for years to find a cure for the blight on the land brought on by the Wasting curse, to no avail. But just recently - no more than two years ago, in fact, a studious Gnome's research and experimentation has changed all that. Effects of his discovery - good and bad - have started rippling across all of Cartyrion.

In the twenty-two hundred years since the end of the Great Strife, sages, druids, priests, and alchemists have been trying to understand the curse that caused the Wasting. They know it is of divine origin, and the fact that its effects have lingered to this day in many areas makes it clear that these effects are powerful indeed.

Recently, in the city of Shadehaven, in the Kingdom of Wenu-wenu - half a world away from the Feywood - a Gnomish Alchemist named Knickwert Bowlensmek made a critical breakthrough. While druidic spells, magical potions and alchemical elixirs designed to promote or enhance plant growth had been tried repeatedly over the years, Knickwert, after eighty-seven years of his own experimentation, discovered that the addition of a single special ingredient was the secret to finally defeating the curse and the Wasting. That ingredient delivered the very essence of life that Berdea had instilled into Cartyrion when he first created the plants, and animals and Fey creatures of the world. That ingredient is but a single drop of Fey blood - but only a drop of blood freely given by a Fey creature who desires to see the world as Berdea intended it to be.

Knickwert stumbled on his discovery after realizing that the areas where the Wasting seems to have have weakened in strength, or which resisted the Wasting entirely coincided with locations of battles between Fey and the Dark Armies. When he surmised that the Fey were willing to die - give their blood - to save their forests, he was on his way to discovering the cure.

While the greatest concentration of Fey may be in the Feywood, there are Fey creatures in every woodland on Cartyrion. With the cooperation of local Fey, who need give but a single drop of blood each, and thanks to a device for dispersing his potion as a fine mist created by another enterprising gnome, Knickwert set about testing his formula. As a result, the portions of the Dwarfwood forest along the eastern coast which had succumbed to the Wasting were suddenly springing to life. Knickwert plans to personally bring secret formula to all of the Elvenwoods on Cartyrion and helping the Elves and Fey to reclaim their lands. He hopes to complete this task in the two hundred years or so of active life he has remaining.

In the twenty-two hundred years since the the Wasting began, it has been the bane not only of Elves and Fey, but also of the those who make their living off the land. Fringe areas around blighted zone, and areas - such as the northern Frontier lands - where the blight lingers are difficult to farm or graze. Naturally, a cure would be an exciting development.

It should be no surprise that word of Knickwert's "secret discovery" was leaked, and has begun to race around Cartyrion. It should also be no surprise that, as is often the case with fast-spreading news, the details have been progressively distorted in each retelling. Recently, word of the cure has reached the lands surrounding the Feywood, but the details accompanying the news have brought problems of their own.

While the true cure calls for a single drop of Fey blood that must be freely given, the distorted details in the news that have reached the Frontier suggest that a Fey creature must be captured, killed, and drained of all blood in order to complete the potion that heals the Wasting. This was likely because of a merging of the mentions of Fey blood and Fey battlegrounds. To make matters worse, the retelling of the story gradually built up an entire "ingredient list" of the wondrous cure - none of which are actually part of the true cure. The one fact that did survive the journey to the frontier intact was that a single batch of potion could be spread over a full acre of land, but knowledge of the dispersing device was not included in this. Nevertheless, the farmers and herdsmen north of the Feywood saw hope.

Some of these frontier Folk do not want to wait a hundred years for some gnome from half a world away to wander into the region bringing his cure. Since they think they know what the cure entails, they are prepared to take matters into their own hands. There are plenty of Fey in the Feywood, they reason, so why not start brewing and spreading the cure here and now? An adventurous - or desperate few have taken to rounding up as many Fey as possible, and using them to concoct what they believe is the cure to improve crops and grazing lands in the north. The fact that none of these cures has done a thing to lift the blight hasn't dimmed their enthusiasm.

Needless to say, the Fey and Elves are appalled - and angered - by this development. While they are all in favor of curing the Wasting, the cost of thousands of Fey lives does not seem a desirable way to do so. They are sure something is wrong with the stories they are hearing, but have not yet had the chance to find the real truth. They were already dealing with the occasional poacher looking for sprite wings, pixie dust, and leprechaun beards for the mindless fashionistas of the northern cities, but now, every Fey was at risk. This would simply not do. 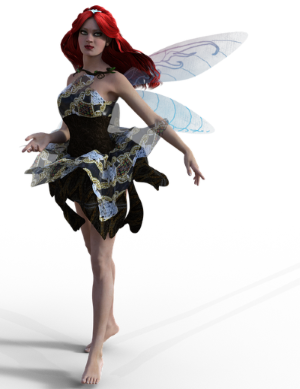 A Sprite from the Feywood
Type
Magical

The Source of the Wasting

The Wasting was brought about by a curse spread across the land by the priests of the Orc god Ghaa’raagh the Render. This curse induced a blight that destroyed all plant life it touched, and poisoned the soil so no life would grow there again. Ghaa'raagh hoped to ultimately detroy the Fey and the Elves that he despised greatly by destroying their homelands. And if the rest of Cartyrion was rendered lifeless in the process, this would give him the chance to remake the world to his liking.

The Orc priests began by spreading the curse along the edges of the seven great forests in which the Elves and Fey were most concentrated. But the Elves, Fey and their allied Folk fought back and ultimately won before the Wasting could be completely spread.

The Effects of the Wasting

In the places where the curse was successfully dispersed, all plant life withered and died - from the mightiest tree to the humblest mosses. As the flora died, the poisons within them affected the local animal life as well. As a result wherever the Wasting was spread, no life remained - the world was reduced to barren, rocky wasteland.

While some regions such as the lands north of the current Feywood borders have recovered somewhat on their own, it is believed that this is simply because the Wasting never fully took hold there. At the same time, what was once the southernmost part of the Feywood remains to this day a rocky, dusty wasteland where nothing grows.

The poachers were bad enough... now this. My second sight has told me that there is indeed a cure for the Wasting, and it will be brought here, but it is not the abomination that the Human-folk in the north are speaking of. But we must be on guard. They will come to take us in the vain hope of improving their own lot. We cannot let this happen; we must be prepared to defend ourselves and our Forest.
— The Dryad Amalthea addressing a Great Assembly of the Fey

Answering: "Describe any condition or disease for which a cure has recently been developed."
Visit RPGDinosaurBob's Competition Page Check all other answers to this prompt Competition Homepage