Properly called the White Elves, in their tongue the Ishvamöinen, this race lives on the mountain Hermon, the tallest peak along the Peku mountain chain. They are also called the Snow Elves, as their homes occupy areas layered with snow year round.

The White Elf race is a small one, and one fraught with tragedy. But their tale is a well-kept secret: very few know what causes them so much grief.

The White Elves did not answer the call of the gods when they first descended, and so didn't see the glories of old Boryen -- therefore they are called the Ava'lman, the lost Elves. They stayed in their mountain lodges, which were always warm and filled with foodstuff. It was a good time, as the Elves of Boryen traded with them often and would help build mighty castles of stone perched on mountain peaks. But that time has long passed.

The White Elves have the longest ears among the elven races. They are beautiful like the other Elves, and individuals have their own distinct visual features. The whites of their eyes are the same color as their pupils - often a pale blue - and their irises are of the same color but of a darker shade. They always dress warmly, although they are not susceptible to the cold. Their women always wear a veil, the band attached to the veil styled like a crown of thorns. The men must accomplish a coming-of-age trial once they reach fifteen. If you ever travel to the mountain Hermon, you will hear them singing in their strange tongue, lamenting a past long gone. The White Elves are grieved over some unspoken history. A shared, racial history, felt in the blood.

White Elves in the World at Large

What else is there to say? Not much. The White Elves rarely leave their ancestral homes. They do not fare too well in warmer climes. Not because of physiology, but because they become so homesick as to literally die. Maybe a child, taken young from their home, will not suffer this problem?

A few light taps upon the pane made her turn to the window. It had begun to snow again. She watched sleepily the flakes, silver and dark, falling obliquely against the lamplight. The time had come for her to set out on her journey northward.

It had been so long since she last saw him. 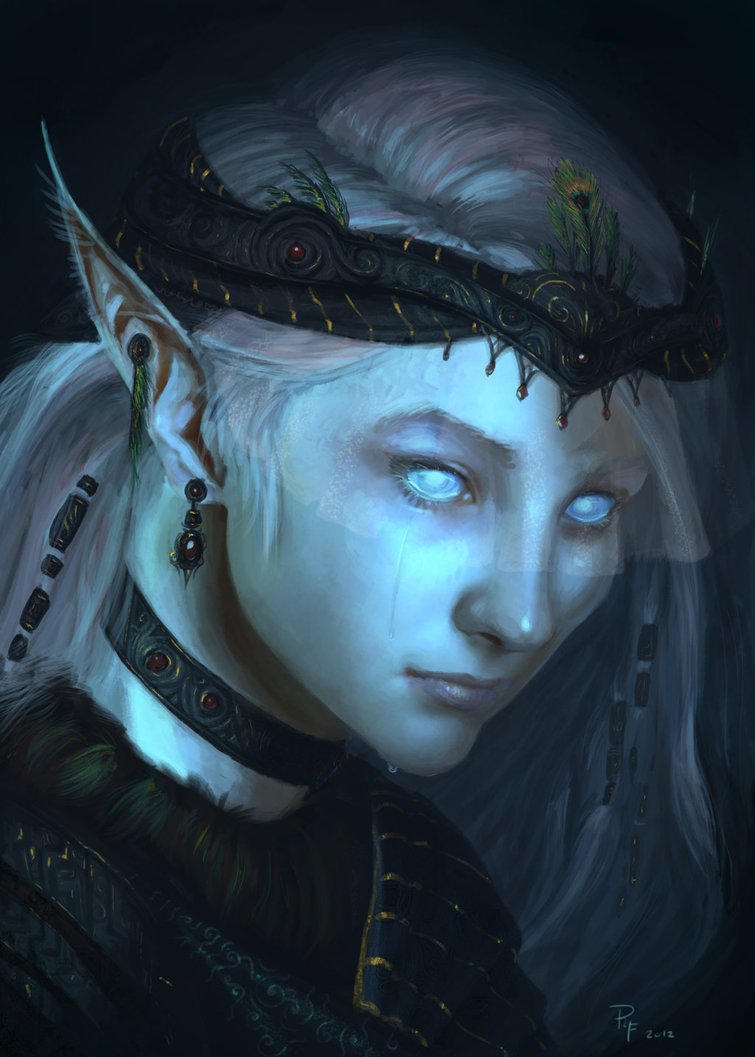 Singers, All: You are proficient in an instrument of your choice.

Homesick for the Winter: You have disadvantage on attack rolls and on Constitution Saving throws whenever you are in an area that is above 0 degrees Celsius. You are immune to cold damage.

Weapon Training: You are proficient with the longsword, shortsword, shortbow, and longbow.

Languages. You can speak, read, and write Common (Kilae), Elvish (Prestige Pirisqwik), and Elvish (Local Dialect: White-Elf). The Altresdolhn tongue is the far-spread language of the Dark Elves of Aran. White-Elf is a mysterious tongue that cannot be deciphered through Magic and cannot be learned by non-White Elves.