Heroes exist now in moldering tombs and the long memory of the conquered. And hope... hope is a divine gift found only in the palm of MY hand! Now, kneel before your new god and beg for my blessing! Your prayers won't fall on deaf ears; quiet the opposite actually. I cannot wait to hear them.
— Jasper, The Autumn King


For the Fae the death of the The Autumn Queen was not the end of the many tragedies that would befall their people but the beginning. It marked a new and dark age where the few remaining survivors found themselves leaderless and alone in place they ravaged and surrounded by the ruined kingdoms of peoples that now despised them. To the people of Tairos; the Fae became legend... relegated to a bleak time long past but something new was stirring in the nightmares of these desperate refugees. A fickle dream given malign life... Jasper. The Autumn King.


It has long been known that the Fae are a mercurial, capricious and incredibly strange race ruled by passion more than anything else. So strong are their emotions that they can manifest in a myriad of unique ways such as magical ability, physical appearance and even molding the waking world around them to better reflect what lies in their hearts. This bizarre facet of their nature has given birth to entire species such as Chimera, Manticores, Minotaurs, Harpies and many others. Sometimes on purpose and more often than not, by serendipitous accident. However; the collective unconsciousness of the fae people can, if focused on one particular emotion, result in the genesis of very powerful entities. Some might liken them to gods while others might say they're more similar to the Totem Spirits of Tairos yet, in either case they are far beyond any individual that participated in their nascent awakening. For the fae that survived the death of The Autumn Queen and Tairos became an inescapable nightmare.

Fae, once the most beloved people across all the kingdoms of Tairos, had not become the target of pogroms whose final goal was nothing less than their complete extinction. While the leaders among their kind such as the Autumn Queen, her Shadow Court and agents of the crown certainly deserved this fate many others were only pawns in their duplicitous endeavor to reap Tairos of all its magical resources before moving on to the next world. Many of these fae prospered from the fruits of the Queen's labor but it was the only way they'd ever known and one they had no hand in choosing. The armies of Tairos' many kingdoms drew little distinction between architects of the Autumn Queen's treachery and those who simply had fae blood in their veins. Some fled into the deep recesses of the world, far from mortal eyes. Other fae wove elaborate disguises with what little magic remained and hid among them. Many sleepless nights were spent praying to any power that would listen just to make it till morning without being discovered.

These were dark times where entire families were put to the torch, where mortals accused each other of being fae sympathizers or even fae in disguise. Death by fire was the preferred method for executing fae that were caught by hunters. Immersion in Lye another cherished option by those that had the time and means to do so. These hunters believed that if anything was left of the fae body than something might live on to haunt their dreams or pollute the land. Soon, there was not a fae left who didn't spend their waking hours stricken with fear and their sleep in the grips of a nightmare.

And, when that nightmare stepped from their minds and into the mortal world it looked around to see a place steeped in terror, uncertainty and despair. Then, the nightmare smiled.


It chose the name, Jaspar, as its own. A name from the old world who's true meaning was long lost to the fae but it found new purpose as a boogy-man tale of sorts. It was just a children's story told by fae to make sure their young ones stayed close. It was an easier story to tell than the truth. That the mortal world was hunting them down to the last and perhaps, justifiably so. The warnings of old Jaspar Ripperskin lurking in the woods did their part in keeping what might be the last generation of fae from following their wanderlust and kept their parents from having to speak of their sins to innocent ears.

While fairy tales of Jaspar were told at huddled campfires in the deepest and most hidden parts of Tairos the new, true Jaspar, took root in the mortal world and began to flourish like the seeds of madness first sown. While still in his own infancy, Jaspar was more akin to a dream-like haunting than a true physical entity. His consciousness fluttered through the land, penetrating the darkest, loneliest places and giving birth to many of the other mythical creatures of fae legend such as murderous Redcaps and the ghastly Sluagh. Others quickly followed from the etheric psycho-sphere Jasper's unconsciousness and into the waking world. Creatures such as Spriggans, militaristic Hobgoblins, the Kelpie drowners, the cinder-serpents known as Salamanders, insidious prankster Gremlins, and the dark mirror to the muses... the Melpomene.

Jaspar's impending awakening into full consciousness was preceded by birth-pangs that took the form of mass hysteria, sudden incursions of newly created sleep-beings, abduction sprees, gruesome murders and nightmares from which victims could never wake. In the beginning these events would typically seize small, isolated communities of mortals or fae survivors but as Jaspar' presence grew it would soon slither into the slums of cities like Ghal Pelor, Ghal Ankhar, Frial and even distant Frostmere. Neither Fae nor mortal knew what was the cause for these grim omens nor did they even recognize anything was amiss as the horrors of their every waking moment took precedent over foul dreams and distant bloodshed.


The gathering storms soon reached a critical mass that ushered into existence the fully awakened Jaspar. His crossing over from the realm of dreams and into reality was said to have claimed hundreds of victims all across Tairos - trapping them permanently in nightmares while their bodies withered. Worse still, dreadful monsters are said to have slipped through the cracks in the barrier between the sleeping and waking world.

Like moths to a flame the scores of new, grim, fae beings flocked to their new creator in the northern edge of the Rylan Woods. They created a dark mirror of a society compared to that of the The Autumn Queen's. Where she had her flocks of raven spies he had his Hollow-Skull Crows who's empty heads were host to pulsating eye-like parasites. She had her Royal Autumn Army and Jaspar conjured his Lantern Knights and Slaughtermen. The elegant and imperious Shadow Court was mimed by his Midnight Circus... a carnival of raucous, diabolical and depraved advisers.

The Autumn Queen had her crown and so too did Jasper. His was a crown of bramble and thorns that seemed to grow from his pumpkin-like head. He crown himself after a full season of slaughter that took place within the burnt out ruins of the Autumn Queen's old palace. During this debased, months long ceremony, dozens of mortals were slain and fae formerly led by the Queen were drained of their very life essence by Jaspar. This hellish revelry ended in a debauched and blood-drenched crescendos where Jaspar incinerated the Autumn Queen's old crown and swallowed the ashes. From that act his own crown erupted and became known by a new name, The Autumn King.

From that day to this one the Autumn King has spent every waking moment trying to break the last remnants of the old fae bonds. That means tearing down the Shadow Court and consuming any of the Queen's lost relics. As for the late moments, those in the dead of night far from the first light of day, they're devoted to plumbing the depths of mortal dreams to feed on fear and sow madness. It's in these late hours that the true, final goal of the Autumn King is revealed. He craves nothing less than a future where Tairos knows only one god... the god of terror. 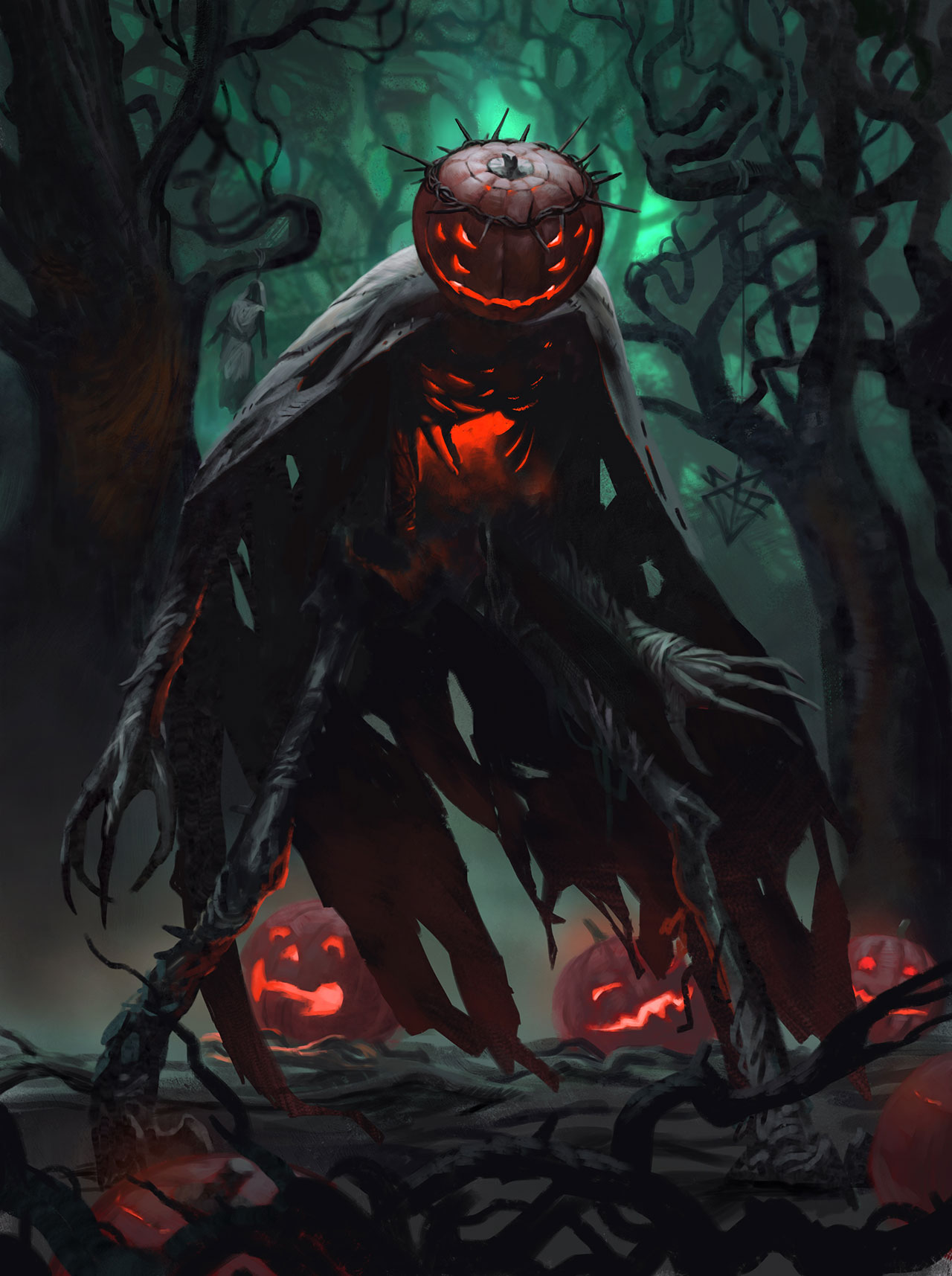 The Autumn King by Antti Hakosaari

The Autumn King feeds of the psychic trauma and fear of those around him. A such, there are no lengths he will not go in order to inflict such emotions on mortals and old fae.

Destroy the old fae and their leaders, topple the mortal rulers and become Tairos' only god