This land is nothing more than a vast, open grave waiting to be filled and it's built on cemeteries filled with people who believed in luxuries like second chances and better futures.
— Theodore Cross

Tairos was once home to such wonders that the modern scholar can't help but to assume them to be myth. Even to the ancient people of Melanthris there remain secrets so old that their libraries fail to capture them. Centaurs are one of those lost fragments of the past that suffered a faint worst than extinction.   To be forgotten.

The Centaur owe their existence to the Totem Spirits of Tairos and the fall of Grandmother Hydra. Grandfather Bear and the rest of the Totems of Balance saw the need for guardians to ward against the return of Hydra and the terrible path that she represented. This meant creating life that had not existed previously, and to many in the ranks of the spirits of balance this sounded dreadfully close to the kind of meddling that Hydra herself endorsed. It was with this in mind that Bear vowed to make free-willed followers and not slaves.

Over the course of thousands of years the totems nudged, prodded, and pushed living creatures hoping to evoke the ideal traits they sought in a species of followers. This was not a clean process akin to what gods are capable of. It messy and rife with failures, some of which still lurk in the deep wild today. Yet, in the end it produced the results they had long since sought. A species that contained all the strength, speed, and cunning that blessed many of nature's other creations but all contained in a single living creature. The Centaur.


All along the way the Totem Spirits of Balance worked to instill within their children a purpose; to protect nature against anything that would disrupt the fragile ecosystem of Tairos. The Centaurs became zealous guardians in service to the Totems, adopting their teachings into an organized religion far more codified than any shamanistic tradition that exists today.

However, the creation and uplifting of a species had unintended consequences as well. The Centaurs culture became increasingly violent and war-like. Unlike the teachings of the gods which often favor order and strict punishments for not adhering to those tenants the totems had no such rigors. Most totem spirits had certain individual traits they favored but when it came to matters of survival nature plays a zero-sums game. This lack of moral direction and harmony with others is what made the Centaurs such perfect protectors of nature and such brutal threats to other civilizations.

The once numerous and expansive Halfling tribes were scattered by Centaur expansion. Evidence suggests that species of intelligent feline and avian people once existed in the savannas of what would later be known as the Balmoral Plains, likely they too were crafted by the spirits of nature. The evidence also suggests that it was the Centaurs that pushed them to the edge of extinction and into the fringes of the continent. In fact, the only things keeping them from dominating all of the early civilizations were the Dragons and the equally numerous and hyper-violent Orcs and Goblinoids.


While the early expansions of the Centaur tribes were bloody and brutal it led to the development of a culture that favored strength and honor above all other virtues. The importance of strength was easy to see. The early ages of Tairos required a certain amount of raw power to survive and only the strongest Centaurs would live on to further their bloodline. Honor was a more complex thing to measure but was no less important to this blossoming civilization. Honor meant the furthering of one's bloodline, the just application of force, adherence to the teachings of the totems, and the respect given by others.

The Centaurs required challenges and threats to overcome in order to gain the honor they held so dear. This was a system that perpetuated the need for confrontation both between tribes and with other civilizations. Those that stood in the way of Centaur expansion could either submit and offer fealty to the invaders and to the totems they worshiped or they would perish in the battle that would follow.

It's this craving for honor that would push them to such great heights but lead to the downfall of their entire species.


The extinction of a species often occurs when a new predator is introduced into the environment. For the Centaurs; their expansion continually took them further south where their hunger for conflict brought them to the attention of The Empire of Skyrir. The grand experiment currently underway by the Golden God of the Skyrirans and it did not allow for any distraction.

Their incursions against border cities and outposts immediately came to the attention of Skyrir's high priests and to the Golden God himself. In his divine wisdom Azuras knew that these creatures were the hand of Tairos' nature spirits and that the future he was trying to build was anathema to the totems. The totems themselves represented the chaotic nature of this that he found so difficult to adjust for and knew that if this obstetrical wasn't dealt with soon it would only grow in scale. His solution was simple, nature's hand must be severed. By his divine edict the armies of Skyrir marched north. Their weapons and their magic were unlike anything the Centaur people had done battle with before. Azuras demanded more than victory in battle. He wanted them cleansed from the land. There was no surrender or terms to be discussed. Death was the only promise offered by the Empire's soldiers. This pogrom also shed light into the reach of the totems' influence and the Golden God's armies were soon turned loose upon all of nature's worshipers.

While the Centaurs were slaughtered to the last other tribal people who followed the teachings of the totems had time to scatter to the far corners of the land. The legacy left behind by the Centaurs was the survival of shamanistic traditions. Without their staunch resistance and refusal to flee the armies of Azuras would have extinguished all of the followers of the totem spirits and fully severed their connection to Tairos. 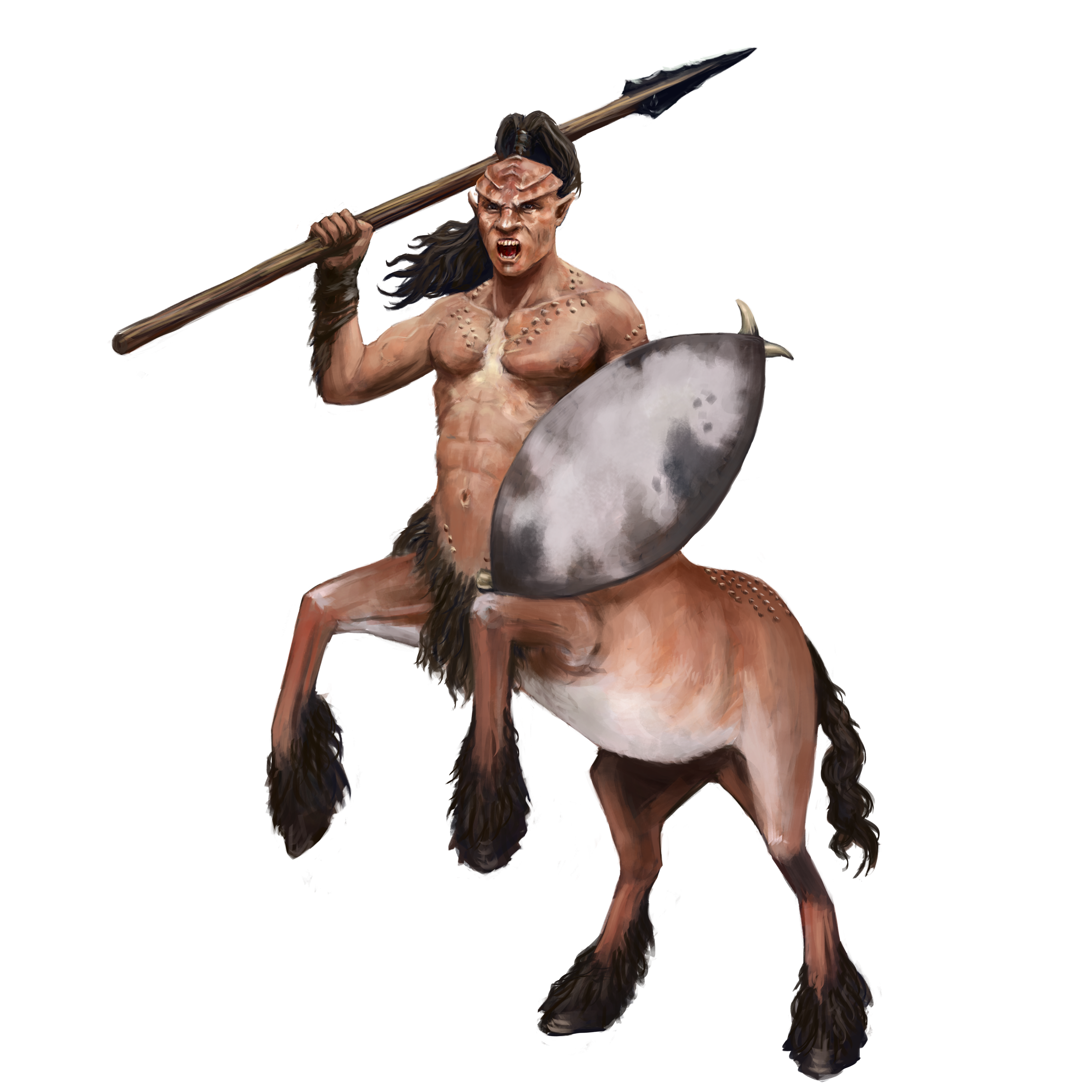 Foals are adolescent Centaurs and were treated as such by adults. Adulthood typically begins around the age of 12 when a young Centaur was expected to start earning honor for themselves and creating a reputation as well as a record of service to the tribe and to the totems

Centaurs preferred the open land of the Balmoran Plains. Densely forested regions are difficult for their large bodies to navigate and limit their greatest asset which is their speed.

Centaurs were omnivores with with a diet that consisted of certain staple fruits, grains, and vegetables anchored around large portions of meat to support their muscled frames.

Bony ridges and structures around the forehead, cheeks, and sometimes down to the breast bone were common.

Centaurs were said to possess a keen sense of smell which was used to track wounded prey or pick up on the scent of enemies
EXTINCT
Lifespan
80-90 years
Average Physique
Centaurs are strong by comparison to other species. They possess incredible muscle in both their lower extremities and upper core as well as arms. The mobile nature of their lives meant virtually all Centaurs were in peak shape and battle-ready.
Races