Evandre is one of twelve Amazon warriors who attend Queen Penthesileia during her journey to King Priam's Troy. Evandre is described in the Mythoversal Penthesileia as the strong-armed thrower of heavy spears. 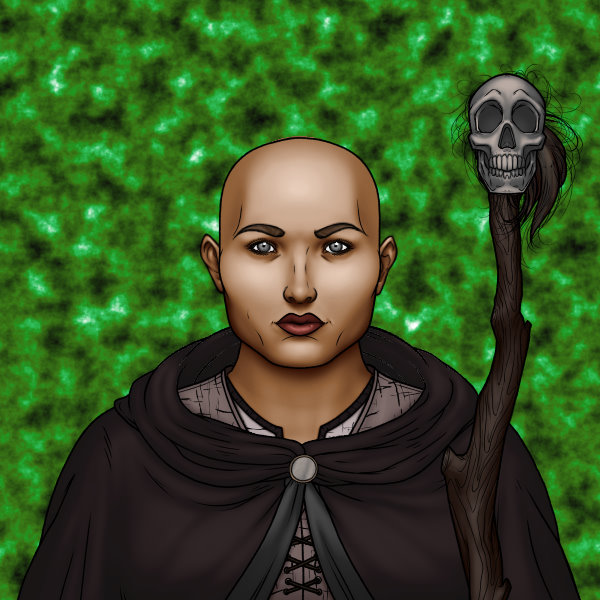 Evandre is the most spiritual of the Amazon companions, which manifests as strict adherence to the traditions of her tribe. She credits her unparalleled strength as a sign from the gods that she has pleased them. Her friends find her pious behavior and constant reminders to be annoying at times, but none can complain about her prowess with a spear.

Evandre favors a heavy spear, both for slashing and throwing. Her strength allows her to inflict massive amounts of damage. She can switch to a sword or axe if no spear is available, but eschews the bow, knife, or dart.   Note: Proficiency at horseback riding makes each mounted Amazon a match for a two-man chariot, and provides a height and speed advantage over infantry units.

Evandre considers Heracles to be her godfather.

Evandre is introduced along with Penthesileia's other Amazon companions in 1. "Amazons, Ride!" in Amazons! .   At King Priam's welcoming feast, she is the focus character of Verse 12 in Amazons! , telling the story of her tattoos to an audience of Trojan priests and elders.

Evandre appears in Book I of the Posthomerica of Quintus of Smyrna, a 4th-ish Century retelling of a story from the long-lost 8th Century BCE Aethiopis of Arctinus Milesius.
Show spoiler
She has no speaking lines, is credited with no kills, and is killed by Meriones, along with Thermodosa.

The Quintan Penthesileiad includes the names of twelve Amazon companions who accompany their outlaw queen on a mission to save her soul. We know that these Amazons are loyal, brave, and skilled in fighting, but otherwise, they are blank canvases. I couldn't give all of them equal focus and development in such a short work, but wanted to give them enough personality traits to make them seem like real people.   How do you think I did in developing this character? Let me know in the comments!